Two batches...some very interesting choices, may I add.
What is this all about? WWRD? (also known as “What Would Randy Drive?”) is an interactive exercise in engagement via V&R's social media channels on Facebook, Twitter and Google+, where I will ask the question for submissions on what I would drive. These submissions are compiled and delivered with 3-5 vehicles as called out by YOU.
On your end, just give me a vehicle – any car, truck, SUV/crossover, van of any make, model and year. What I do is compile what I know of said vehicle and give you an answer why or why not I would drive it. I'll also explain why. 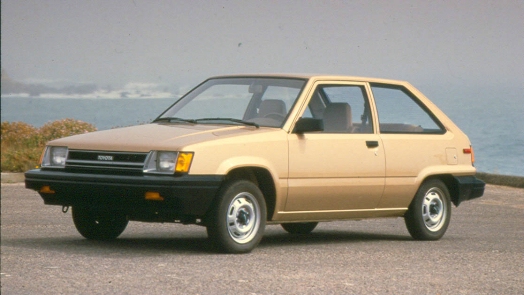 What is this all about? WWRD? (also known as “What Would Randy Drive?”) is an interactive exercise in engagement via V&R's social media channels on Facebook, Twitter and Google+, where I will ask the question for submissions on what I would drive. These submissions are compiled and delivered with 3-5 vehicles as called out by YOU.

Here's another three submissions for WWRD? Keep sending in your ideas and I'll put them on here…

TOYOTA TERCEL: This is an interesting selection since I have not seen one of any year driving around in good condition anywhere in the Upper Midwest in more than a few years. If I were on the West Coast or in Florida, I'd probably see more than a few of them – even older models with the north-south-mounted engine.

The Tercel is an interesting choice since they became Toyota's de facto subcompact for North America – until the Echo and Yaris showed up. It took five generations to roam this planet – from being a sub-Corolla in 1978 through to its transition over to the somewhat strange-looking (and quite intelligent) Echo. The one I drove was the third generation one – the second with the engine transversed. This would be about 1987. The Tercel had always been a light, nimble car. Granted, it did not drive like a Celica or a Supra, but it was competent to take in urban areas and longer commutes.

Was it the best Toyota could do? The fact that it was a very basic mode of transport with only 1.5litres at ready, three automatic ratios to work through and just the right amount of steering and brake feel. Some might even say that a Tercel was a bit too boring for people looking for more excitement. Did I hear that about the Yaris at one time?

WOULD RANDY DRIVE IT? Interestingly enough, I have to say yes. The way to do so is to do some sort of endurance drive of one with well over 150,000 miles on the clock to see if it still does the job. Either the second or third generation models would do for this trick – something that brings back the days when they roamed places, such as Los Angeles and the Silicon Valley (before everyone got majorly rich). Granted, they're not as excellently finished as today's Yaris, but there's nothing wrong with going back to basics. The Tercel was exactly that.

CHEVROLET CITATION: The X-Car – General Motors' answer to create a front-wheel drive sedan for the masses. Using Sir Alec Issigonnis' transverse-mounted, space-saving powertrain design, GM figured to replace the old rear-drive Chevy Nova with a modern design and a cadre of brethren for each North American brand, save for Cadillac. However, GM also came up with some brilliant ideas never introduced in any production vehicle it ever made.

The result was a car that Americans considered to be a bit much for their tastes. They wanted a spoonful, not huge helping of mashed potatoes. Then, there were the quality issues and complaints about this design feature and that execution of engineering.

Having never driven an X-Car, I drove other GM front-drive vehicles to know one thing: They learned their lessons very quickly! The J-Car was well designed and was given a chance to evolve during its long run here. The A-Cars were once a favorite of mine – until the Ford Taurus blew it away. Even the larger front-drive models of the latter 1980s through today’s Epsilon II and Delta II chassis were eons greater from the first evolution of transverse-mounted, front-drive GMs of 32 years ago. Still, the X-Car was a running joke I never had to be the punch line of.

WOULD RANDY DRIVE IT? Some things should remain in the past. The X-Car is one of them. So…no.

HONDA CIVIC HYBRID: Honda and Toyota always had this war over which hybrid Petrol-electric system is the best. Toyota's Hybrid Synergy Drive would be seen as the superior system as it is a simpler design to understand. Honda's IMA is a different story. It seems so complicated as there is more integration in managing between the petrol and electric motors than Toyota’s system.

Yet, Honda system works just as well. I've driven the current generation Insight to see this in action. This would make the Civic a better proposition considering that it is roomier than the Insight with more power to boot. Yet, Honda simply let us all down with the current Civic. Others have criticized the hybrid system for being too complex and that the battery pack eliminates the fold-down rear seat option at a higher price point than the EX.

If you are part of the chorus of critics of the newest Civic, there are older Civic Hybrids to choose from. That is, if you can spot one at a pre-owned car lot. If you do, check the mileage and how much warranty you have left.

WOULD RANDY DRIVE IT? The last (eighth) generation Civic Hybrid – absolutely! I like the last generation despite its quirks and quarks (having driven the non-hybrid LX version a couple of years ago). The Hybrid brings another dimension to the game. The first batch of Hybrids – one owned by a friend of mine – would be fine, but somehow I'm drawn to the 2006 (eighth) generation.