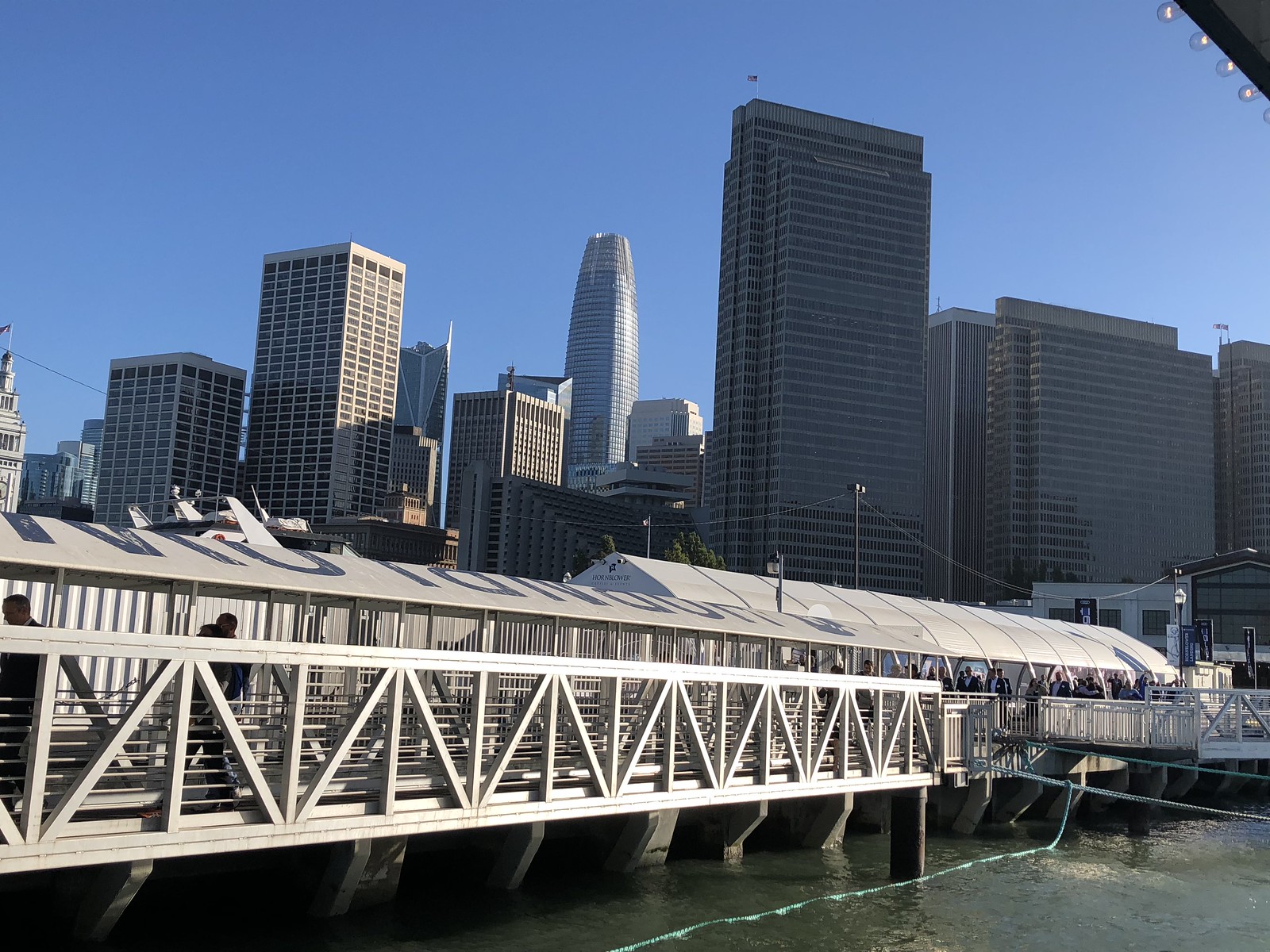 I left the San Francisco Bay Area in 1996. I never returned. Until now.

Over the past 22 years, I tried my best to remember the good times and forget the rest. It was not because it was a not so great situation for me. Quite the opposite. It was a life-changing nine years spent living north and east of that 49 square mile center of the self-proclaimed universe.

San Francisco is on its own axis. If you read Armistead Maupin's books, you get a sense of The City's self-importance. Herb Caen's columns and Alex Bennett's morning shows confirmed this for morning commuters on BART coming from Fremont or Concord into The City.

Yet, it was conservative before it became liberal. It was racist before Willie Brown was elected to the state legislature. It was homophobic before Harvey Milk moved to The City.

It has always been hedonistic – going back to the Gold Rush. And, it always had a gravitational pull for those looking for a different kind of life, including who arrived for "The Summer of Love."

I have roots in San Francisco. My father’s side of the family arrived as immigrants. My grandmother's family settled in San Rafael, across the Golden Gate in Marin County, to open up a dry goods store on Fourth Street. It was still open in 1996. My father was born in The City, only to make himself a cad at San Rafael High School and College of Marin. His brief stint in the Marine Corps did not change him. Nor did his marriage to my mother.

Through my colleagues at the Washington Auto Press Association, I found myself in San Francisco for the first time in 22 years. We attended the unveiling of Audi's new e-Tron full-battery electric vehicle. For me, it was a quick turn – 27 hours on the ground.

How could I get reacquainted with a city that I loved and hated in a span of 27 hours?

It starts with an old French saying: "the more things change, the more they stay the same."

What I witnessed was a change in some places. Candlestick Point no longer had that eyesore of a stadium that once held the 49ers and Giants. There are new homes there, with Hunter's Point/Bayview just around the bend. Mission Bay had been transformed into a port-side swath of homes and attractions – such as AT&T Park and the new arena for the Golden State Warriors.

There is a new tower peeking through the skyline. Salesforce Tower sits south of Market Street in its tapered top fashion. It vies for its distinctiveness against the old Transamerica Pyramid – a juxtaposition between the financial power of Montgomery Street and the tech-driven story of 21st Century San Francisco.

Yet, there has been a lot that has not changed. As our shuttle bus drove through on Sixth Street, San Francisco showed a worn-down city from years of age, homelessness, and resistance to change. There were moments when I mumbled, "ain't a damn thing changed!" It was a sign of resignation that this self-important city will continue to maintain a sense of chaos in some parts of town.

Familiar sights were more encouraging than desperate. Watching tourists line up for the cable cars at Powell and Market Streets yielded decades of memories. The old Emporium flagship store across the street lives on as a Bloomingdale's. There were the two Macy's buildings in Union Square – with memories of shopping and browsing before the company became the big box store swallowing behemoth it is today. There was a time when Macy's was a real honest-to-God Macy's – and it was a special place to shop.

I was encouraged that the old PCC streetcars still rumbled down the middle of Market Street. It was a sight I remembered as a kid and rekindled when they brought them back for the F Market line to Castro and 18th. Yet, MUNI will always be MUNI – not often reliable, but it can still get you there if you’re patient enough.

As part of Audi's program for the e-tron world premiere, they transformed the Bill Graham Civic Auditorium into a "tech park." I always envisioned The Civic as a place where music came alive. It was an iconic building that framed City Hall Plaza.

Which brings me to what I consider my favorite building in San Francisco – City Hall. It is not just the building itself, but the history that it witnessed. This was where Mayor George Moscone and Supervisor Harvey Milk were killed by Dan White in the November of 1978. It was the scene of a massive riot in light of White's verdict for those same crimes. The building served as a backdrop of many Freedom Day Parades and festivals, mayoral inaugurations, fairs, and other civic events. Before there was a skyline downtown, this building was the city's signature. It looks as gorgeous as I first witnessed it as a child.

This trip yielded plenty of firsts that this old Marin/Contra Costa resident never got to experience when I was here. The Hornblower boat tours is an institution in the city. Audi secured the San Francisco Belle – a large paddle wheel boat – to ferry us from Pier 3 to Richmond’s old Ford plant for the e-tron's unveiling. This was the largest boat I ever took across the choppy waters of the bay. It reminded me how good I had with the Larkspur Ferry – a commuter vessel operated by the Golden Gate Bridge and Transportation District.

My stay at the Hilton San Francisco at Union Square was my first hotel stay in the city in decades. Many trips prior to my moving to the Bay Area in 1987 were never spent in downtown San Francisco. I ended up staying elsewhere – such as by the airport or in Marin. The central location of this massive hotel lends itself as a destination and meeting place for friends and colleagues alike.

At the top of Tower One of the Hilton San Francisco at Union Square, the Cityscape lounge gave us a view of The City at night looking lovely on all sides. City Hall was lit in green, while the Civic Auditorium shows some rainbow colors.

It was there that I met up with an old friend. My history with Bill goes back to a Taco Bell on Ventura Boulevard, where we both worked in 1982. He was a senior at Taft High School (a rival to Reseda High School) and I just started Los Angeles Pierce College. Our paths have crossed many times, even as we both lived in the Bay Area in the late 1980s through my departure in 1996.

Bill continues to live in Alamo Square with his partner of well over two decades. He was lucky as their place continues to be rent controlled, where property values and rents throughout San Francisco has skyrocketed to astronomical costs. Still, The City's charms keep Bill and his partner Zoe there. It is a hub for their many adventures in work and life.

I had plenty of good times in The City. Some are probably best not stated on here. These memories came through the world of self-discovery of my own identity. None of which would prepare me for the career I have today.

My second and final morning sent me to The Castro. I had to visit "Bearbucks" – the Starbucks on 18th and Castro. Though it was less "bear" than Starbucks that morning, it was a point of interest I wanted to close the loop on. The LGBT community allows the twain to meet. This was no exception.

Still, a walk down Castro from the MUNI Metro station continued the flood of memories of my time and relationship with San Francisco and the Bay Area. My first time was intimidating – a place where being LGBT meant everything. Perhaps, it still is, years after the fact.

And, yet, I moved on. The 22-year gap saw growth and change since I left San Francisco and the Bay Area. I was a completely different person when I lived in San Rafael and Concord. I followed the beat laid down by the conga drum that enticed us to follow our dreams into the heart of this alluring city. I chased lust and felt the pleasure and pain of being gay. Manhood and adulthood were achieved in this area anchored by two suspension bridges across the rough waters of San Francisco Bay.

And, yet, I felt disappointment and loss in San Francisco. Wherever I went, I saw those reflections of those moments. I also saw achievement and life on every other block. The experience was not just about Audi and their e-tron. It was the weaving of the confluence of the past, present, and the future.

This short 27-hour stint in San Francisco challenged me to seek closure with nine years of life in that place. I considered the lyrics once sung by Steve Perry of Journey: "I had to get back to the city by the bay." Closure achieved. Mission accomplished.

Not every travel opportunity will yield joy and excitement. Some places offer moments of recollection and blessings. In a nutshell, my 27 hours in San Francisco for Audi yielded much more than a world premiere of an electric SUV. It closed a major gap in my life that spanned 22 years.

DISCLAIMER: Travel and logistics were provided by Audi of America