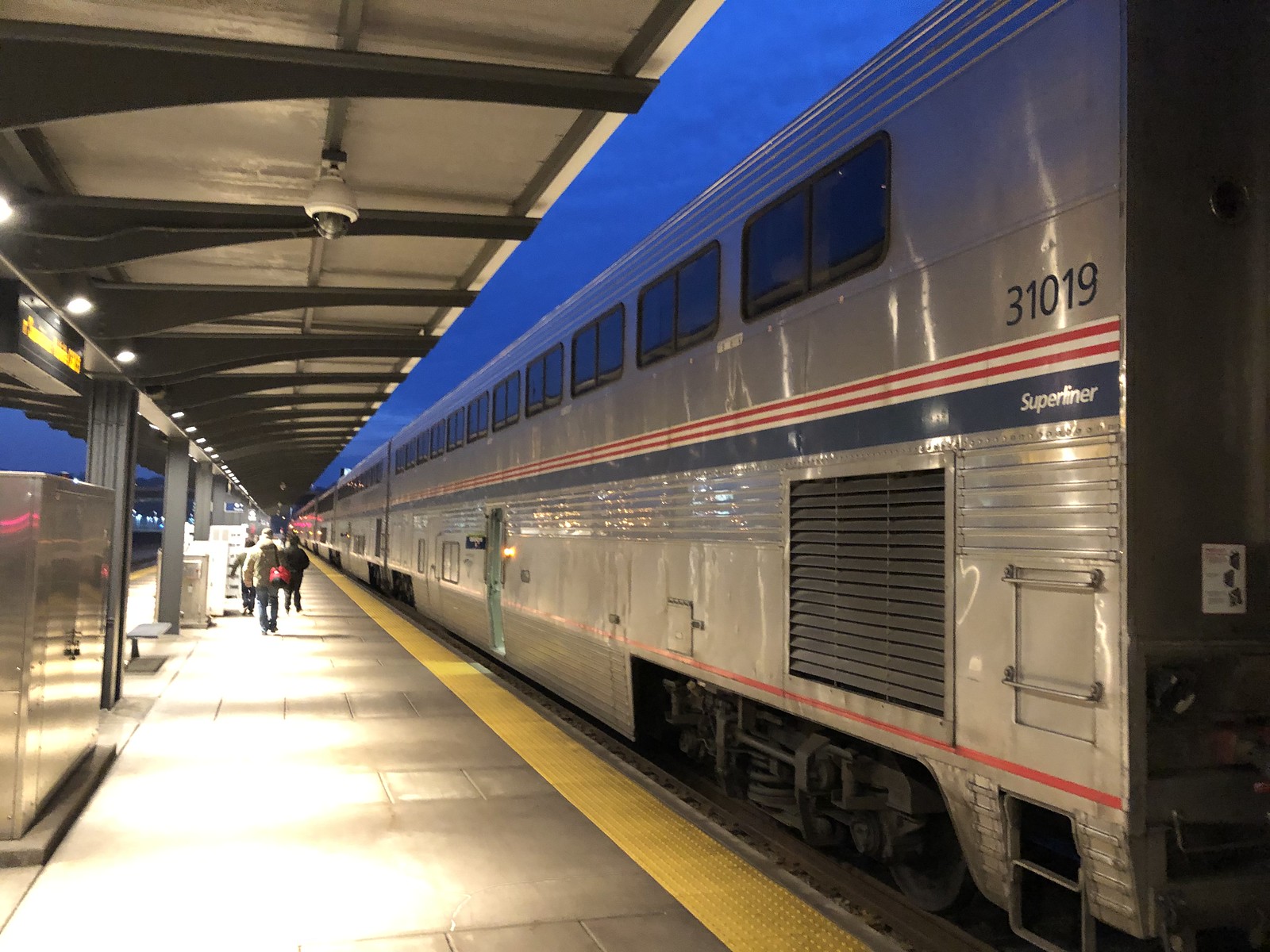 Early Saturday morning. It’s dark outside. Even as we past the Winter Equinox last month with the promise of longer daytime hours, I still end up fumbling in the dark.

A good night’s sleep at a downtown Minneapolis hotel helped. I felt a spring in my step. There’s no ice to slip on. Just concrete in the dark, and an almost quiet light rail station. The Green Line to Union Depot…that’s a different story.

This was the start of my latest Day Trip Challenge. This Winter Edition yielded a day’s worth of adventure. I was looking forward to it with some trepidation.

After almost a couple of decades living in the Upper Midwest, tolerating winter has yielded two outcomes. One, a feeble tolerance of the cold. The other, a frustration that I fear I would be a victim of it at my age and condition.

Still, I am strong willed. I faced this Day Trip Challenge with the stubbornness of my late mother – who would have been 90 years old a couple of days before. We lost her at age 63. I turn 55 in a few weeks. Mortality is a bitch.

Still, I figured as a middle-aged man that I can still do things, even if it means dragging my ass out of bed at some odd hour to head across the Twin Cities for a train ride along the Mississippi River with a crossing into Wisconsin and my Day Trip destination – La Crosse.

Why La Crosse? Consider Amtrak for a moment. If I stayed in Washington, DC, I would reap the benefit of multiple trains that originate or ride through Union Station. If I lived in Chicago, I would have many more options by train out of their Union Station going all sorts of directions.

However, I live in the Twin Cities. There are only two trains that run through St. Paul's renovated Union Depot: East to Chicago or West to Seattle or Portland.

The schedule is quite simple. The eastbound train is scheduled to depart at 8:00 AM daily towards Chicago. The westbound train arrives after 10:00 PM from Chicago daily, too. Somewhere is a round trip that is logical, affordable, and offers plenty of things to do along the way.

Logic. Who plans any sort of travel by purely using logic as its guiding principle?

All logic was thrown out the window when I arrived at Union Depot. The refurbished and reimagined station was part history lesson, part modern open space. Waiting was fine, yet the eastbound train arrived early, and we boarded accordingly.

It gave a chance to check out my seat – unassigned, except for which door I had to board through. The seats are wide and somewhat comfortable. It was not fatigue-inducing, but it has its qualities. You can recline further than an airline seat, it also had a cushion extender, a foot rest, and miles of leg room. You better believe I took advantage of this!

After we pulled out of St. Paul, I had to take care of my hunger. A few cars down, the Dining Car awaited. If you are a solo traveler, you get seated with complete strangers. They were nice, though. The young fella next to me was heading back to Tomah, Wisconsin from Williston, North Dakota, and we sat opposite a retired couple from somewhere in Washington state. The food was OK, the service was good, and the conversation was alright. All I know is that I got some sustenance in me.

A couple of cars back was the Lounge Car. The upper level was an observation space with windows arching almost to the roof. This is probably very popular when the train rolls through Montana. You can get snacks in the lower level and bring them up for your view.

There is something I should note: The bathrooms. They’re not clean and are extremely small. Maybe I’ve gained weight. Who knows?

My arrival into La Crosse kicked off the challenge with a friendly and informative Lyft ride. That yielded a delicious lunch at Fayze's. If you go to La Crosse, please eat there! It's that good!

After lunch, the challenge started to fail on me. If your business has a listing on Goggle, please make sure your listing is accurate. I went to one place where the Google listing showed it open. I got there – and it was closed. That lead to a couple of other fails…that I rather not get into, because they were insensitive (for one) and embarrassing (for the other).

After a quick Lyft ride from the closed business, I found myself at Valley View Mall. If you want to see the decline of the mall, having two anchor stores shut down with no plans on replacing them was a sad sight to see. Meanwhile, the rest of the mall are holding up just fine.

Needing to do a few things, such as print off receipts, I had to take a pretty long walk to the FedEx Office location. This was a long walk that had no sidewalks to navigate. I guess nobody walks in that part of La Crosse and Onalaska.

Another adventure was riding La Crosse’s public transit system, the Municipal Transportation Utility or MTU. It is a hub-and-spoke system with a major downtown hub and a secondary hub on the city’s northside. The schedule is dependent on whether the University of Wisconsin – La Crosse is in session or not. On Saturdays, service is hourly, with every bus leaving at the same time from the Grand River Station hub.

Riding La Crosse's buses could be seen as an adventure. They have quite a number of regular riders who happen to know the drivers well. There were also some very……special folks who ride along. I know that the stigma of public transportation is prevalent in terms of class division. Maybe I didn’t prepare myself for the panhandling stalker downtown and the man with anger issues out by the Target off of Wisconsin Highway 16.

Upon my return to downtown La Crosse, things definitely picked up. A quick coffee at Jules on Pearl Street sparked a second wind. Since I was down here to do an article for another outlet I write for, I did some quick research and found that the local LGBT community center was not only open – but a few blocks away.

The visit yielded not just yielded basic information on La Crosse's LGBT community. I got a tour of their facility to find that they more than just hold programs and welcome community members. They have a clothing bank for those who need something to wear. Soon, they will open up a food bank. These additional services, on top of a lending library, available computers, and welcoming staff, add value to a center that wants to help those who have been marginalized by society at large. To me, that is what being a beacon for the community is all about.

Lastly, I had an early dinner at Pickerman's on Jay Street. This sandwich shop is a staple for La Crosse and is a must-visit for affordable and delicious food. It was my finale to the Day Trip Challenge: Winter Edition in La Crosse.

My train ride home was delayed in La Crosse by 15 minutes. Once I got my ticket scanned and seat set up, I went to Lounge Car to do some writing. I found a quiet booth downstairs while a group of loud, and possibly inebriated people wearing Pabst Blue Ribbon hoodies were having a good time upstairs. Maybe the Mennonite family that was exiting the train in La Crosse was glad to be relieved of the sonic implosion.

Let me assess this Day Trip Challenge for a moment. It was OK. The train was fine. Using Lyft certainly helped in transporting myself when I really needed a…ahem…lift. The transit system was meh, to be honest. Frankly, I would have either stayed overnight at one of the hotels in downtown La Crosse…or do this with a vehicle I’m working with that week.

Should I mention that train travel has not been affected by the shutdown of the U.S. government? There were no Transportation Security Administration folks to do their job at train stations – well, the two I traveled to/from.

It is worth noting that this was my first train trip in five years. I do not think it’s fair to compare a train ride with some fellow auto journalists from Ann Arbor to Chicago on one of the Wolverine trains to this roundtrip. Nor would I compare it to the Cascade trains I rode on back in 2008 between Seattle and Portland.

Amtrak operates a solid train system, but not without its foibles. Perhaps it is because we have the one line running through the Twin Cities right now – and that’s it. What choices do we have? You can either fly somewhere or take an intercity bus…or drive!

What we really need is to advocate for the operation of the second train between the Twin Cities to Chicago via Milwaukee. Many reports have this service starting up as early 2022. There are plenty of passengers who may take advantage of this service, which would depend on how this second train would be scheduled along these lines.

However, I truly think that this Day Trip Challenge would have been better executed with an automobile. Yet, it would go against the original rules of such a challenge – fly or take a train, drive in town or take public transit, and do what you can from arrival to departure.

What future Day Trip Challenges would you want to see? I have some ideas. What say you?

DISCLAIMER: All travel expenses were paid by the author