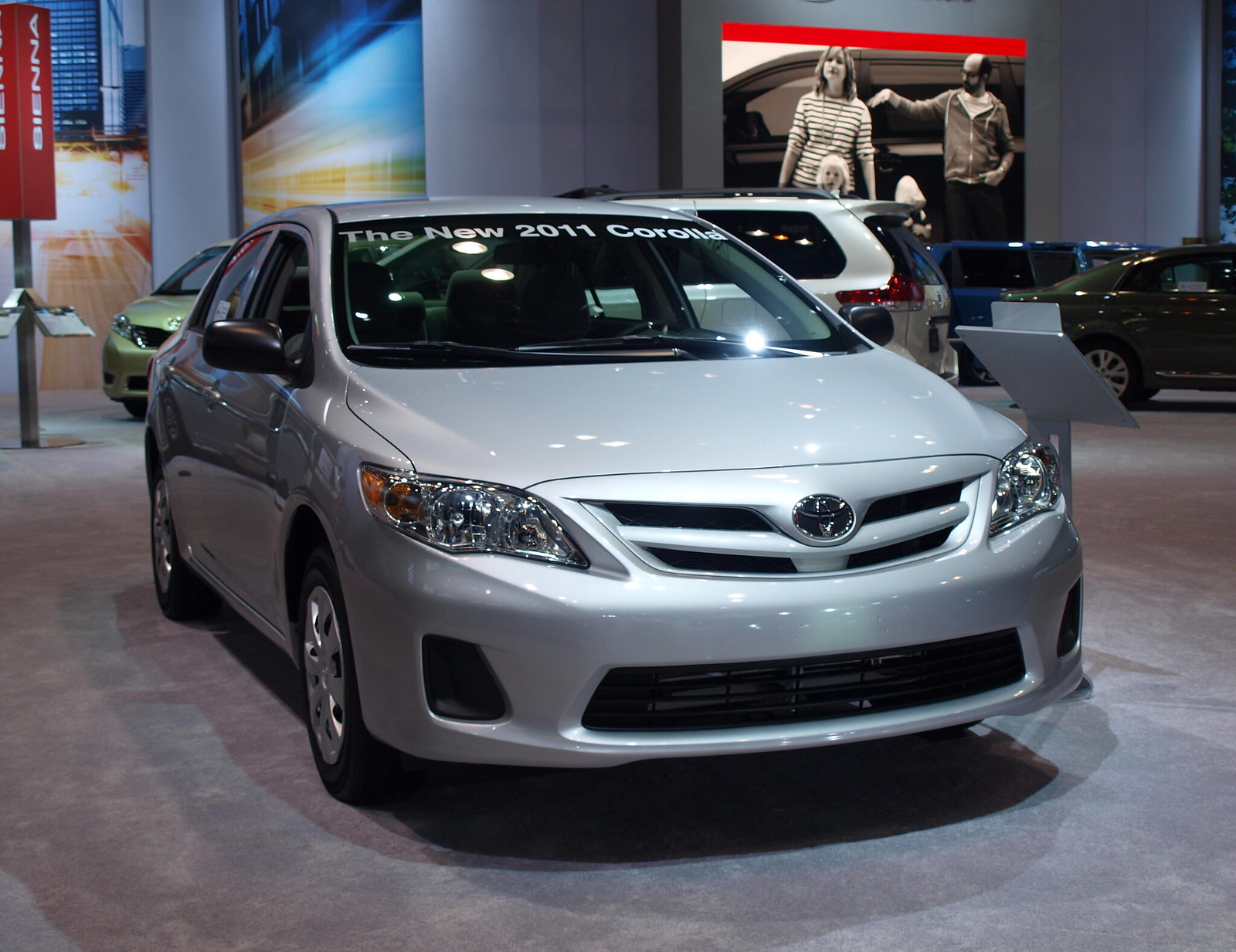 When the year began, fuel prices scaled up towards the $4.00 a gallon threshold. The result was a rise in smaller vehicles – passenger cars and crossovers.

This was a break out year for the compact car.

When the year began, fuel prices scaled up towards the $4.00 a gallon threshold. The result was a rise in smaller vehicles – passenger cars and crossovers.

The newer products caught the wave of compact car growth by outnumbering sales of everything else. The Chevrolet Cruze outsold the Toyota Camry two months in a row this spring. The Hyundai Elantra led all models as the company's sales skyrocketed in the wake of sales losses elsewhere. The segment is still growing with other new introductions: The Ford Focus, the Volkswagen Jetta and the Honda Civic. Dodge will introduce their new compact at the North American International Auto Show this coming January.

For the longest time, there was one compact that outsold them all: The Toyota Corolla. With every new model that had been introduced over the past 18 months, sales of the Corolla began to slip every month. Partly, this was because of the challenges presented to Toyota during the recall crisis.

It appears that the Corolla is due for a generational change. The world’s best selling passenger car had been soldering on for a bit longer than expected. However, Toyota knows how to come back from being down…it's in their culture.

How does one create a better Corolla? This is where I come – The Speculator. Though no actual information or floating rumors were available to go on, there are plenty of clues where the next Corolla will come from. Rather, how it would take shape.

THE IMPORTANCE OF BEING: To build upon a legacy of 30-plus million Corollas roaming the planet, the next Corolla should by at least everything to everyone. To achieve this, the eleventh generation Corolla has to be a truly global product.

The importance of a truly global Corolla has a lot to do with the enormous reach of this vehicle. Built at 17 assembly plants in 16 countries, a singular design and a simplified, but flexible, selection of drivetrain options would help in ensuring continuity in quality and engineering.

Certainly, there should be some wiggle room to meet localized requirements. Between lighting and safety regulations in Canada and ensuring Australian market vehicles can drive in the bush should be a degree of flexibility to meet the needs for each market within the framework of a singular design and engineering strategy.

THE PRODUCT: To understand how the eleventh generation Corolla would look like, one must look at both the latest Yaris and Camry for clues. Both vehicles are part of a new global design language emphasizing an aggressive stance with high style and richer details. If you take both the Yaris and the Camry together, you may just get the next Corolla.

For every market it sells, the Corolla's primary body style will continue to be the four-door sedan. There will be a five-door hatchback that will see more markets than before – North America included. If Toyota decides not to make a new version of the Matrix, the five-door hatch would fit well in this market. Consider how well Ford is selling the Focus hatchback. This is the kind of business case that would return the Corolla hatchback stateside. In markets where the Fielder wagon is sold, expect the new Fielder to join the lineup of the sedan and hatchback.

If there's one thing that would make the new Corolla would be a longer wheelbase. Consider how well this will translate between bigger cabin space and a better ride. Along with more space, a higher quality cabin would be welcomed in both established and developing markets. It is one thing to remain the same in terms of quality and reliability. The new Corolla would present a greater opportunity to exceed everything it is known for. The cabin is a great place to start.

With a singular design philosophy should come with a simplified engine lineup. There should be three basic petrol engines: A 1.3litre, a 1.5litre, a 1.8litre. Add a turbocharged diesel engine, a hybrid drivetrain and a high performance engine (preferably the 2.5litre from the Scion tC), and then you have a well-rounded lineup under the next Corolla’s hood.

To maintain the degree of flexibility of this common design, engines can be made available per market. In North America, the 1.8litre would be the basic powerplant for most of its products. The only issue would be in terms of performance. While the bar on compact cars had been raised well over 140HP, the 1.8litre needs to find some more power. Simply put, 134HP is no longer sufficient to compete in this market.

Streamlining would also be seen on transmission choices. To make things simpler, two six-speed gearboxes – a manual and an automatic – should be the only choices available worldwide. The only exception would be the continuously variable transmission for the hybrid variant and other markets where the CVT would be appropriate to use. Could a dual-clutch gearbox be in the offing? It would be nice, but that would mean intensive engineering and manufacture to supply 17 assembly plants.

One thing Toyota might consider is to move the fun-to-drive quotient back to the days when it was fun to drive a Corolla. For me, that would be 1988 – in an FX16. In the most basic sedan, a bit more attention to drving dynamics would work in the Corolla's favor, but firming up the ride towards a balance between comfort and agility. Changing the way the suspension reacts to corners instead of letting it glide through them. The trick i achieving a getter driving Corolla is to find the balance of every key market's needs and coming up with a driving dynamics package that exceeds even the most discriminate consumer. It could handle the worst roads in India or Australia, but the next Corolla should also enjoy the view from the Blue Ridge Parkway or along the Danube.

WHY A SINGULAR COROLLA? The Corolla has been for most of its life a universal product. Maybe a grille texture or a different engine would separate a Corolla sold on one continent from another. A few generations ago, Toyota decided they could afford to create versions for different places.

With sales reeling from changes in the marketplace and from the residual fallout from the recall crisis, it would be of Toyota's advantage to streamline development costs for this new Corolla. It would advantageous to have the same tooling and body molds for all 17 plants worldwide that will build this car. Cost efficiencies will also help hold down pricing on the new Corolla – something that would also help in being competitive in every marketplace.

Controlled development costs would also afford to explore the wiggle room for specific variants in key markets. A Corolla SE for the North American market would be one of those products. Luxury models, swathed with leather and a full complement of equipment found on the Camry XLE or a Lexus, would also be considered for markets such as India, The Philippines and Vietnam. Europe would definitely see a lower priced, slightly smaller Corolla hybrid to compliment the Prius.

In all, the overall look and basic engineering tenets of the Corolla should not change from market to market. The savings by streamlining 93 or so percent of the product would go to other Toyota products needing the same fiscal and product development guidance. This could also signify a return to a familiar direction for Toyota.

It would be nice to actually drive a Corolla that would be fun for once. Would you imagine if that happened? It might even outsell the Camry…ehem…maybe.