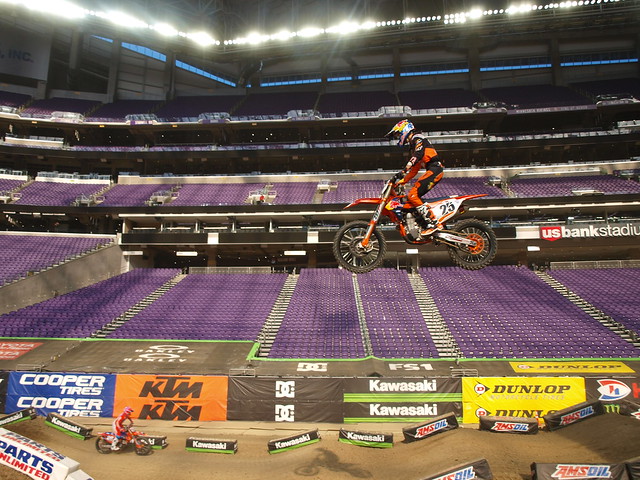 Rarely does Victory & Reseda cover anything with two wheels.

In this case, it is driven by your interest. I found out that aside your love for four-wheeled transport, you also love two-wheeled – preferably motorized – transport, too.

Importantly, you also like to advance your love of two-wheeled, motorized transport in the motorsport arena. You may enjoy the global excitement of MotoGP, which brings the best riders in the world on superbikes at the best road courses around the world. You may like dirt track racing, putting high powered bikes onto the dirt oval.

To explain these series, it is as simple as summer and winter. During the warmer months, motocross is done on a tight, dirt course with lightweight motorcycles running in various classes with engines ranging from a 0cc two-stroke motor to a 450cc four-stroke machine. Men and women compete in these classes, sanctioned by the American Motorcyclist Association (AMA) and the Federation Internationale de Motorcyclisme (FIM). The latter denotes a more global series in both dirt trail motocross and stadium Supercross.

During the winter, stadium Supercross provides an opportunity for AMA and FIM sanctioned riders to compete in a similar dirt course. This time, they use an existing stadium with man-made hills, turns and other course elements. The most famous Supercross venue was the Los Angeles Memorial Coliseum, where the Arch was used as a hill and turn. They have not run Supercross there since 1998. 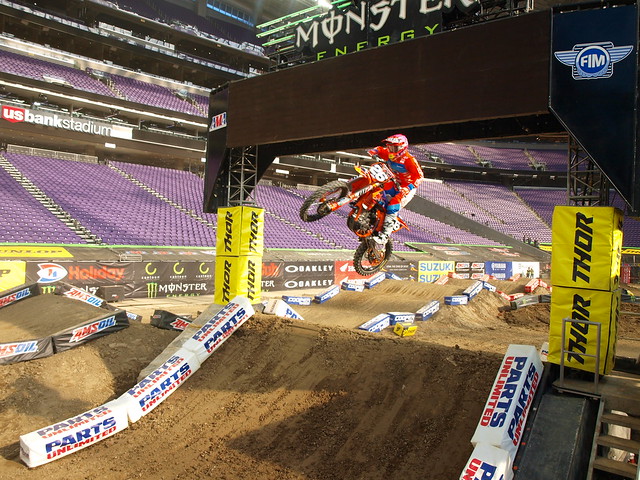 I have never been to a motorcycle race of any sort ever. I figured it was a good time to do so. Therefore, I went to the new US Bank Stadium in Minneapolis for their stop on the Monster Energy AMA Supercross tour, which also serves as an FIM World Championship series.

My Supercross experience began the day before the actual event. I was invited to join in a media preview at the venue to meet several of the 450SX riders – the top class of this series – for photo opportunities and interviews. Knowing that I am good with interviews…sort of…I did not have any clue what to ask these guys. From that point, I relied on my camera to hopefully take some awesome shots from their exhibition runs.

Well…as you can see…it wasn't half bad. My vantage point was an official's tower by the finish line. Within feet of my nose, I saw some of the top riders making serious air. I cannot measure how high they went, but it was immeasurable how wide my eyes went from jaundiced and jaded to "holy s—!"

The focus of this stop in Minneapolis was the reigning champion, Ryan Dungey. It is not every day when you can say that the top rider in Supercross hails from just 43 miles away from the venue. Dungey was the focus of all the media, with the four television outlets and the Star Tribune getting their media shot with the local hero. I took a few photos of Dungey with his KTM 450cc ride. Currently, Dungey is leading the 450SX class going into the Minneapolis supercoss stop. 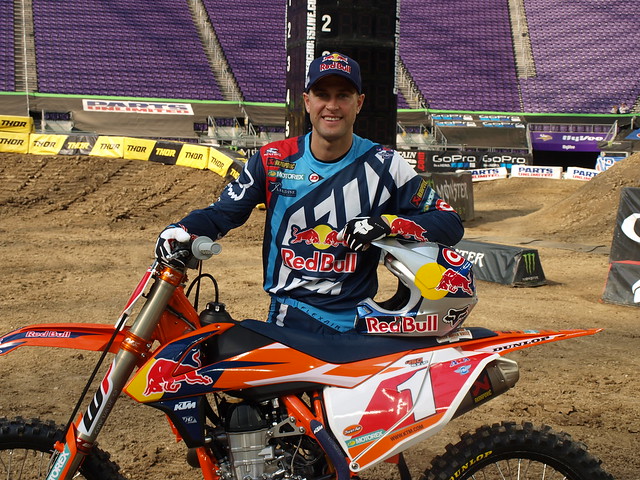 I will admit that the access to these guys at the media preview was not bad. Maybe they did not anticipate a guy like me taking their photos candidly – let alone a guy who just happens to be an automotive writer/blogger/journalist.

Having a taste of what this event was all about, I picked up my media pass for Saturday's main evening program and was sent to the Thomson Reuters Press Box. I have never covered anything from a press box. I've dreamt of working in one, especially when I was doing baseball blogging on Major League Baseball's blogosphere. The press box has its own allure.

However, there were a few of us media folks working that evening. The rest of the seats were filled with VIPs from the teams and riders. It was a bit different than I anticipated.

To be fair, I had nothing but great connectivity from the folks at Feld Entertainment, the producers of the Monster Energy Supercross series, along with my friends at the PR firm that connected me with this event. I loved that they gave me this shot to check this out and try to write about this experience. 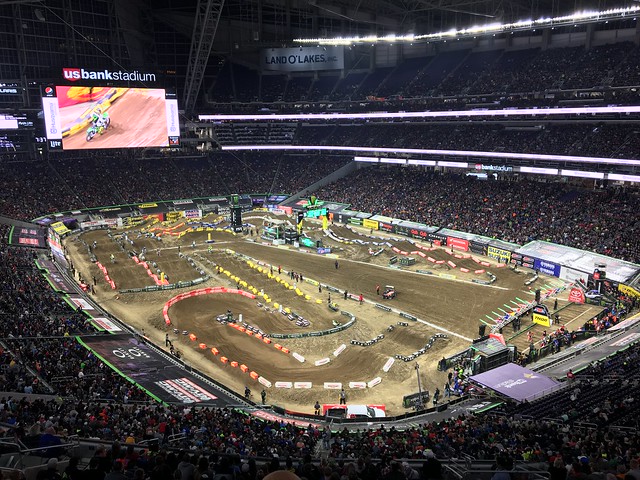 As for Supercross itself – and I'll be showing my age here – it was rad! I might not be the demographic for this kind of sport – let alone that I am not completely into two-wheeled, motorized conveyances. No, let me rephrase that – I appreciate motorcycles and their riders, but I don't ride. I can relate…excuse me whole I dig my hole further…

It is worth noting that the star attraction of the night – Dungey – did quite well that evening inside U.S. Bank Stadium. Although he placed third in the 450SX races, Dungey retained his top spot in the class for the series. The overall win for the night in the 450SX class went to Colorado native Eli Tomac and his Kawasaki. The 250SX class was dominated by series leader Georgia-based Joey Savatgy and his Kawasaki. It was a sweep for the evening for the top two classes for the green team.

This led to something I have found about this sport, as it relates to others I am familiar with. One can dominate the field for a season or several seasons, but there is parity that keeps domination in check. This is true for Supercross – not one rider or cycle manufacturer will be completely dominant. Some nights, KTM will win…others Kawasaki. Perhaps Honda will take top podium in another race. You get the idea.

In recalling when Supercross ruled the Los Angeles Memorial Coliseum, it is good to see this sport still rolling and engaging with fans.

DISCLAIMER: All access to this event was courtesy of Feld Entertainment.