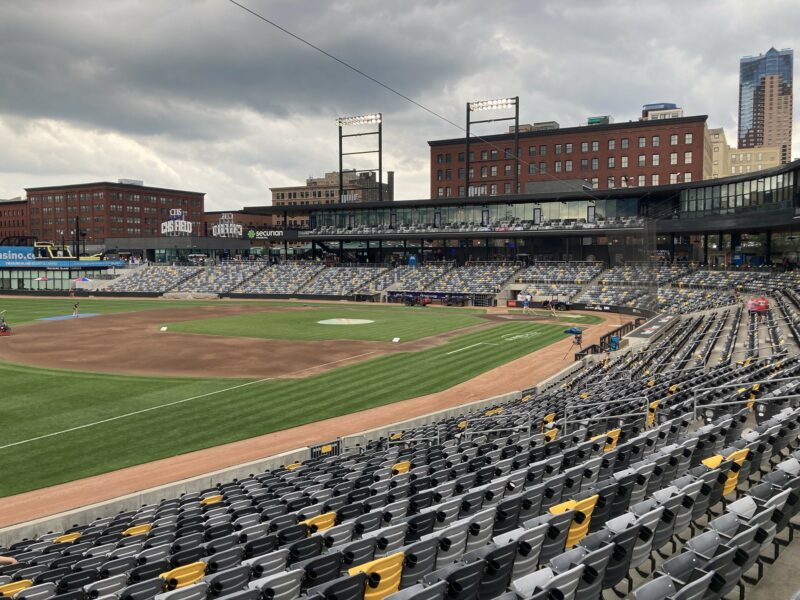 It was easier for to get credentials at the Los Angeles Auto Show than to get media access to an MLB ballpark.

A dream has finally been fulfilled…sort of.

In my pre-Victory & Reseda life, I was an MLBlogger. I had a blog on Major League Baseball until the time V&R started really taking off. Yet, getting a pass into the press box was difficult. It was easier for to get credentials at the Los Angeles Auto Show than to get media access to an MLB ballpark.

Eleven years later, I took on the story to talk about the Saint Paul Saints’ Pride Night. This is their promotional event where they welcomed the LGBTQ community to CHS Field. I was able to get media access for myself and the magazine’s event photographer.

The Saints are currently in MLB’s Player Development Leagues at the Triple-A level. They play in the International League’s West Division as an affiliate of the Minnesota Twins.

This would be my first visit to CHS Field. The last time I saw the Saints, they were in the independent American Association playing their games at old Midway Stadium down the street from where I used to work some 15 years ago. That ballpark has been demolished for a new industrial building.

CHS Field is a fine ballpark. A single level of individual seats, topped off with two private clubs and the press boxes. I like this ballpark and am glad that it is not far from my home.

The game with the Scranton-Wilkes Barre RailRiders – the New York Yankees Triple-A affiliate – did not start on time. We had a weather system come through. It sucked because the last time I was attended a ballgame – in the Quad Cities – it never happened due to field conditions.

With the 2022 Ford Expedition in the lot across from CHS Field, I knew I had an easy exit ahead of me, if the game was called.

While waiting in the press box, I had a chance to chat with longtime member of the team’s entertainment team, Seigo Masubuchi. We were actually catching up on the years, telling stories, and just biding time during the rain delay. That conversation also included a baseball blogger for the Saints, which gave me an insight on the transitions the Saints made from playing independent baseball to becoming an MLB affiliate in what was once called the “farm system.”

The one thing that makes the Saints stand out among PDL teams is the principle of “Fun Is Good.” This was a carryover from the early days of the club’s 30 seasons. Owned by the son of MLB owner Bill Veeck with investment from actor Bill Murray, they wanted to change the way fans engage with the team. Not only did they use an image of a pig for some of their marketing, the Saints added an entertainment team to give life to the stands.

Masubuchi is one of several entertainers, yet he also has a role in business alignment with the club. It seems that these entertainers also have roles in the club’s operations and not just there to get the crowds going.

As for the pig motif, look no further than Mudonna – the team’s mascot. She is a wonderful mascot and a great ambassador for the Saints.

While the entertainment team is what makes the Saints unique in all of baseball, one must look at the ballclub itself. One important component to the club is its manager, Toby Gardenhire. If the last name is familiar, he is the son of the Twins’ legendary former manager. Toby is not like his father – not the firebrand we know from going after umpires. He appears to be forging his own path by preparing his players for the eventual call-up across Interstate 94 to the big club.

Prior to the inclusion of the Saints into the PDL system, future Twins would have to go through Rochester, New York for their final step into the Majors. The commute is much, much closer now.

Around 8:00 PM, the announcement came. The rain would continue to roll through Saint Paul and the field would not be ready to meet the standards of the PDL. This game was postponed and was made up as an early Saturday doubleheader against the same Scranton-Wilkes Barre team.

In reflection, I thought that by working the Saints game for the magazine and completing “the arc” of the story that was posted on its website – it would be completing another arc. The arc that began as “The Heirloom.”