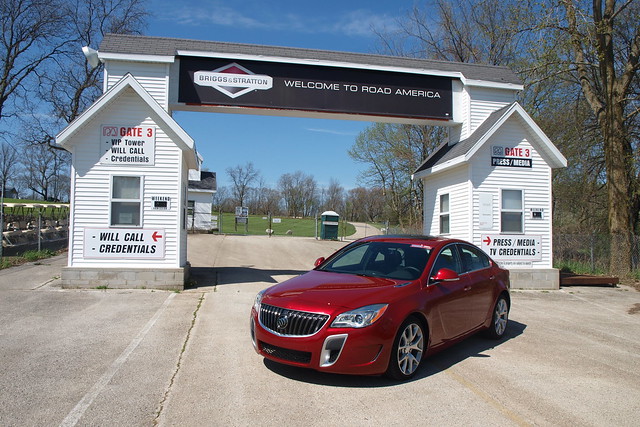 There is one more tale to tell from the 2014 Midwest Automotive Media Association's Spring Rally. It was one that I wanted to accomplish for a long time.

The weather was right for it – a major change from last year’s rain. A few clouds, but the sun was definitely shining on Road America. All I needed was the opportunity and to check my courage levels to simply "go for it."

What was the one thing I am talking about? It seems obvious what it is…so…

Finally, The Lap
The one thing I had in the front of my mind was to do a lap of the track.

It might not have happened, however. It was not the "fear talk" that almost kept me from doing so. It was obligation and responsibility in my new role, even as e-mails began to populate my mobile device from the office. My mind needed to be clear – the skies above and the weather was good enough to partake in fulfilling this singular goal.

In the morning, I drove a few vehicles, did interviews and photos – including one photo op that not to be believed – and had lunch. I walked around the find the right car. A red 2014 Buick Regal GS with all-wheel drive was selected. Having driven a Regal in February, I was familiar with what it could do. Yet, this was a GS – a very special machine with one button that changes everything for the car: The GS button.

To make sure I did not ruin the Regal GS, I had an accomplice. Katie was someone I knew for a couple of years at the brand via social media. We decided to take on this exceptional piece of tarmac together. I was far from nervous, but I wanted to make sure that my lap needed to be done smoothly. The starter, one of the fleet company staffers, was made aware of my being a "slow driver." Then, I was sent off.

For the record, I did not "kill" the track. I made sure I felt where the transitions were in and out of the curves. This was not to blast the Regal over fourteen turns and three "straightaways." This was to test my ability to put practice into execution.

The lap went well. I had the Regal close to the prescribed line to avoid hitting the rumble strips and diving in and out of the apexes. To make sure we competently work the second straight known as the Moraine Sweep, they put in two temporary chicanes on either side of the Sargento Bridge. They were fine and certainly slowed me down on the approach to turn 5. This is actually one of the most difficult parts of the track, as you have a left-hander – turn 6 – right after the Corvette Bridge. It was a bit harrowing, but I managed the Regal GS, my passenger and I though the Hurry Downs, Turn 8, and the Johnsonville Bridge into the Carousel.

The peace and serenity of my lap almost came down crashing out of the Carousel, when a Scion FR-S showed up in my rearview mirror. I had to make sure get distance away from the Scion by simply blasting out of the Bend and Kink onto Kettle Bottoms. It helped. I lost the Scion. I was back to feeling the curves once I got the Regal GS into Canada Corner and through the north side of the track over the Hawk Tunnel.

After Turn 14, the Scion came back into my rearview vision with two others behind it. I was fine with that, accomplishing one thing off of my bucket list. A wave of my fist out of the Regal GS denoted a lifelong dream at its end.

An hour after taking it on the track, I gave the Regal GS a "victory lap" in the countryside around the track. For what it is, this car rewards you handsomely. With horsepower numbers and promises of hardcore, track-style performance, I have to question any car (except for a chosen few) who wants to take your money and lets you down on several details. You can question the pricing of the Regal GS, but you have to consider what it really does to the soul. I will always vote on the side of satisfaction and that "smile on your face" quotient before any logic comes in to ruin the fun. That describes the Buick Regal GS exactly.

To think, I would do my first ever lap of a track in a Buick. That says a lot for the brand. That might say something about me. 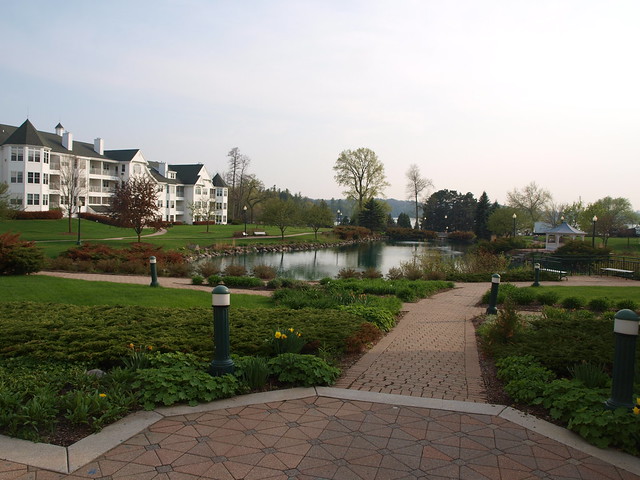 Another May, Another Rally
This is my second time at the MAMA Spring Rally. It is a business trip worth taking for a guy like me. Only a few of us are privileged to do this. Yet, this is not a trade show where all you do is try to network and take home random swag. Nor is it some convention where everyone is talking and you have to find the "takeaway" from these speeches and breakout sessions to use back in your office.

Considering the change in position and responsibility, this business trip involves interactivity – the kind you want me to experience. The track experience helps in understanding the art of driving, even back on the streets and highways on my home turf. Driving on roads that could only exist in the Kettle Moraine help in understanding the capabilities of vehicles that would manage the roads near my Twin Cities base. If I partook in the autocross or the off-road experience, those adventures also hone in the idea of the extremes in driving.

This is not your ordinary business trip or convention. But, I get to take away some ideas for future stories in all of my three outlets. You cannot simply drive these vehicles for the hell of it. You work your butt off to understand these vehicles, so you can deliver competent and expertise content about them.

I hear it all the time – I have a cool job. You can say that. The truth is that there is a lot of hard work that goes into it. You could go to an event such as this, drive and enjoy your time doing so. Or, you could absorb the experience and translate that into the words you read here and elsewhere.

Since 2001, when I published my first automotive-related piece of content on the website I was Managing Editor of, I chose to do the latter. It has been the work I love the most. That is why I returned to Road America for another Spring Rally.

This is why I still have a reason to do it.

DISCLAIMER: Some travel expenses were paid for by the Midwest Automotive Media Association