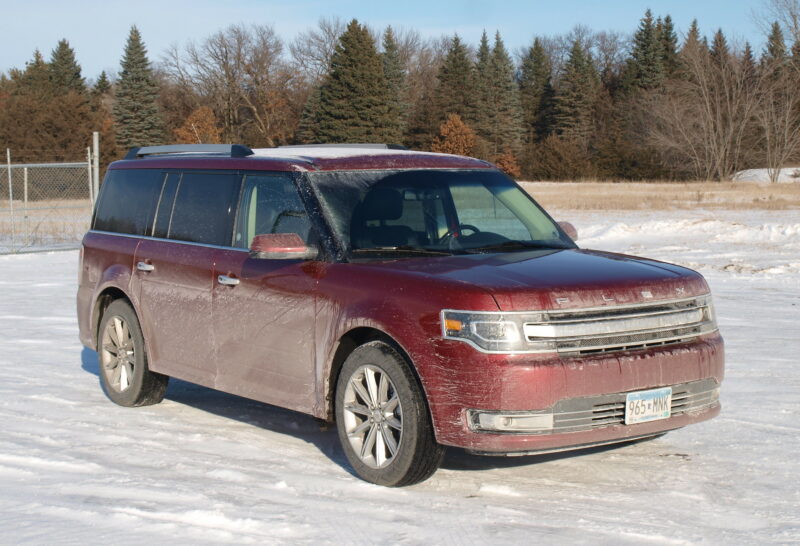 Somehow, I got inspired by driving this…

This is a three-row crossover. It may seem more like a tall-ish wagon that I may have reviewed a few years ago. It may not be the first thing you think of for family transport requiring three-rows of seating. More on that later…

This conclusion was made the first time I drove the Flex in November of 2009. The huge cabin and the driving manners won me over. The normal 3.5litre V6 performed well. Still, the combination of Ford’s in-car technology, the retro pseudo-Country Squire design and a solid chassis proved the point of how good the Flex really is.

Since then, a new front-end design was forged. It was a controversial move not because of its headlight design and emphasis on the Flex branding – it was missing something. Save for the Mustang, this was the first Ford since the 1980s to be sold without a blue oval up front.

There are plenty of stock reactions to this. "Why" would be the first question that would pop up. There are many answers to that one – some not worth mentioning to a general audience. Still, it threw a wrench to consumers wondering what the Flex really is. Just accept it as a part of the Ford family – and drive it.

Everything else has not changed since November of 2009. This is thing has a huge cabin, comfortable leather seating – for the Limited model, that is – a huge driver’s cockpit, MyFord Touch, SYNC, Bluetooth connectivity, twelve Sony speakers located all over…and so forth.

However, there were some surprises. That 3.5litre V6 has a lot of brio – something you do not describe a Ford engine that is not EcoBoosted. Without the badge, you might think it was one. Not to disappoint, those 287 horses motive this 4,600-pound, three-row crossover over miles of enjoyment.

You can, however, get the Flex Limited with the 365-horsepower EcoBoost V6 – which makes this family hauler a serious…hauler. Think of one as an Explorer Sport without the blacked out everything and the badge. Come to think of it, an EcoBoosted V6 Flex is sort of like a Stealth bomber. You may keep talking…

The Flex is a smooth riding machine. Except for a few gaps in the road, the Flex was designed to make any journey pleasant. A crossover should be designed to not jar a child’s sleep whilst sitting in the third row after watching some animated movie. Nor should it make the ride unsettling for the patriarch and/or matriarch of the clan. And it should never make your spouse or significant other insignificant, either.

There is a bit of lean in the corners, however. This is only when you push it hard. You should not push this vehicle hard when loaded with people and their things. Steering is decent, considering good wheel action but a bit loose on-center. Brakes stop well, also.

The best part of this equation is the all-wheel drive system on this Limited. This thing works! It sent power to all wheel ensuring you grip on bad surfaces at any turn. I have never seen the Flex any fight for grip. The amazing part is that this was achieved using nineteen-inch Hankook Optimo rubber. Given previous experience with Nexen, Kumho and Hankook tires, I was pleasantly surprised when it did everything the Flex was supposed to do on snowy/icy surfaces.

Starting at just under $30,000, you could get this true three-row crossover that does not look like your typical SUV-esque model. You could get something that is made for long highway runs, cross-town commutes, school runs and sober cab duties without drawing attention to yourself. So what if it does not have the big blue oval up front saying it is a Ford? The Flex is simply a fun conveyance that truly does not need a badge. If you must have the blue oval…it is on the liftgate on the lower right corner.

So, again I ask, how come you are not considering the Ford Flex for your family?

DISCLAIMER: vehicle rented by Victory & Reseda for the purpose of this review