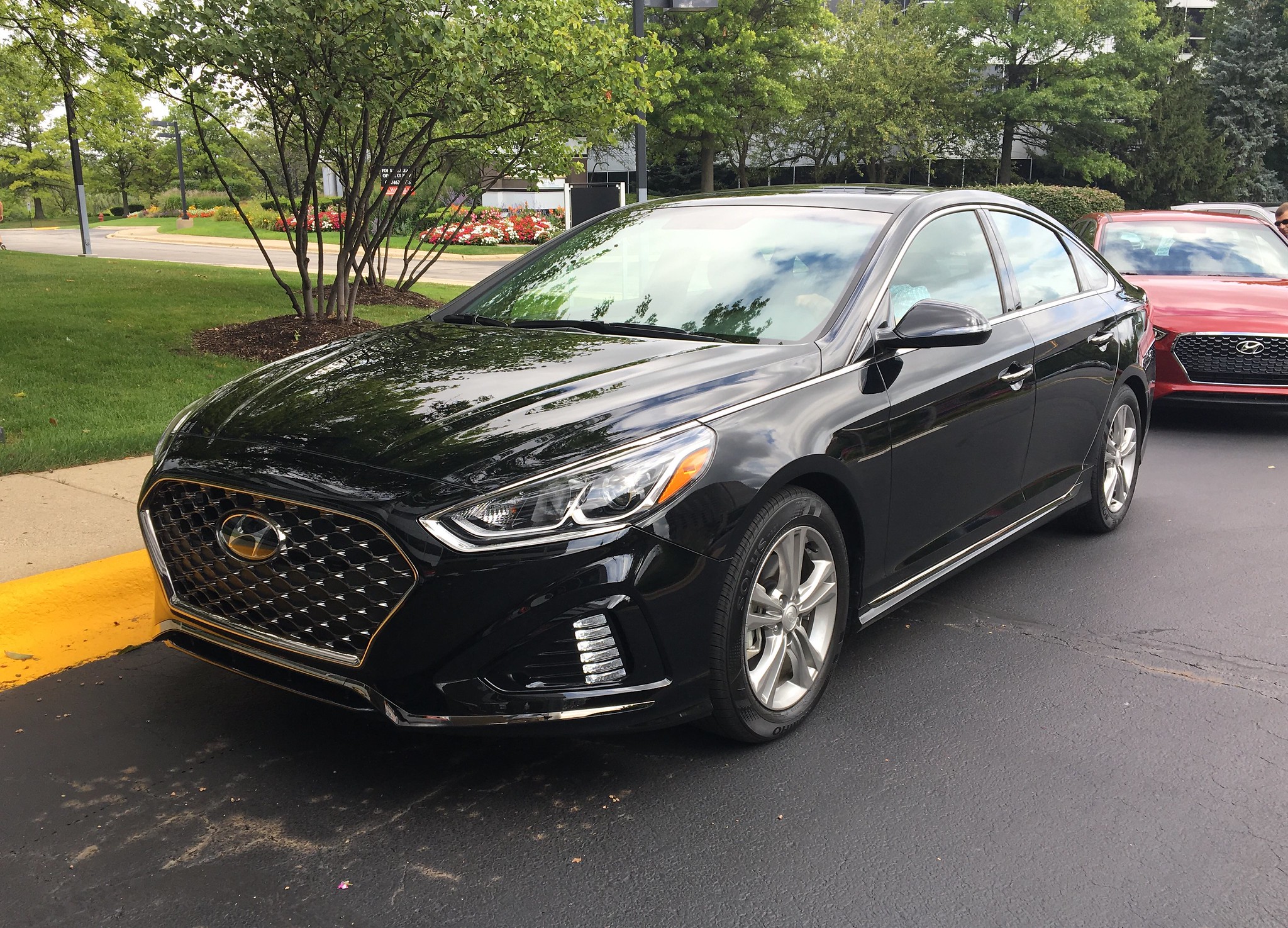 The long hard road for Hyundai has paid off in their product offering.

For example, the Elantra and Sonata lines remain their bread-and-butter. Hyundai has been selling at a mix of commercial/fleet and retail, offering solid value for the money. Their SUV products are growing – mirroring market trends.

Hyundai recently announced the end of Azera sales, culminating in the final 2017 model year units. This will leave Sonata as the top of the line for Hyundai's car lineup. This could spark another trend we might see across many brands in the marketplace, as the large sedan market is on the decline.

All of this leads to a much-needed revision for the Fluidic Sculpture 2.0 Sonata. The 2018 model sports an updated look that applies current design trends from the brand along with some upscale touches.

To see the new 2018 Sonata, I was invited out to Oakbrook Terrace, west of Chicago's Loop for a brief drive. Since this car was a two-time #VOTY (Victory & Reseda Vehicle of The Year award) winner, my interest was piqued to see how Hyundai's mid-sized family sedan has been transformed in a mid-cycle refresh.

The 2018 Sonata was not the only Hyundai I was privileged to see. New for 2018 is the next generation Elantra GT. The hatchback is related to the sedan, but are designed differently for their specific primary markets. The sedan is clearly aimed for North America and select Asian markets. The hatchback – known as the i30 elsewhere worldwide – has its primary customer base in Europe.

I have never driven the Elantra GT and heard that it was different than the sedan. In that case, I was glad they included the new hatchback in our short drive program so I can see what the differences really are.

This should be a good two-fer. Both cars will show us what to expect from our local Hyundai showroom in the coming months. All I needed to was to drive both new entries for 2018 through some select suburban roads outside of Chicago.

This all-new version of Hyundai's compact hatchback has to be the most improved vehicle in the lineup right now. It is completely different in every way – right down to chassis.

Though it may exactly look like the global-spec i30, Hyundai made sure to put some more engineering for the North American market. A good example is the introduction of a Sport model, with its 201-horsepower 1.6 liter turbocharged four-cylinder engine. The big engineering change is the swap of the rear torsion beam suspension found on the base GT for a multi-link set-up.

The example I drove was a base GT with the Tech Package upgrade. While I appreciate a geared transmission – a six-speed automatic in contrast to the use of a Continuously Variable Transmission found on most of the GT's competitors – I wished there was more low-end torque for better response. The 160-horsepower 2.0-liter four-cylinder engine is superb around town and on the highway, however.

Exterior-wise, I think it's handsome. Up front is a new design featuring a cascade grille which will be a new signature for Hyundai. Everything else is very nice looking and distinctive, especially out back and along the silhouette. The longer roof enables for more cargo utilization and better headroom in the rear. It also sports the largest cargo space in its class – 55.1 cubic feet with the rear seat folded down.

Step inside to a much better cabin than the previous model. The center stack is crowned by a tablet-like infotainment pod, which will include up to an 8-inch touch screen. The Tech Package adds a 7-speaker Infinity audio system, navigation, and BlueLink. The seats are very comfortable and supportive, with a great view of a solid instrumentation binnacle. Ergonomically, it is a wonderful package to drive, including more storage binnacles in the center console.

Pricing starts at $19,350 for an Elantra GT base model with a manual transmission. This is very competitive against its hatchback rivals. It is also a better value for those looking for an alternative to a subcompact SUV. In fact, Hyundai believes it can attract not only customers looking at the Volkswagen Golf, Toyota Corolla iM, Ford Focus, and Mazda3 but of the Mazda CX-3, Chevrolet Trax, Toyota C-HR and Nissan Juke.

In all, I believe this is a good choice in a segment that needs a serious boost in sales. Considering the kind of customer that would want a hatchback compact, anyone getting a 2018 Hyundai Elantra GT will thoroughly enjoy one.

However, may I suggest driving the Elantra GT Sport. I drove that 201-horsepower turbocharged engine in the sedan version, and its a very sporting and fun driveline. In the hatchback, it should be even much more fun.

In its debut for 2015, Hyundai raised the bar in terms of vehicle design and cabin space. Yet, it received its share of criticism of being way too toned down from the previous generation model. This update for 2018 should do the trick to make the Sonata something of a car mid-sized sedan customers might want.

The updates are indeed extensive on the outside. Hyundai re-engineered the entire front clip all the way to the A-pillar. The new signature cascade grille sets off a set of slimmer LED headlamps and an entirely new hood and front fenders. Out back is a cleaner look, with the license plate moved to the bumper, enabling the cleanest rear end on any Hyundai in a long while. There is also a trick for opening the trunk – on the logo, there is a button. Find it and open it up!

The instrument panel and center stack also received some touching up. The instrument binnacle has some finishing, making it pop some more than before. The center stack received a new surround for the touch screen. The console offers more storage and places for a lot of things you had to fight to put in previous models – let alone its competitors.

The model lineup remains the same. Initial 2018 offerings include the SE, SEL, Sport and Limited trims. Also carried over is the 185-horsepower 2.4-liter four-cylinder engine and a 245-horsepower 2.0-liter turbocharged engine. New for the turbo is an eight-speed automatic transmission, which will help in quicker low-end shifts and better fuel economy.

The Sonata I drove was a Limited model. Compared the last Limited sedan I drove during the last launch drive of this car in 2014, this is absolutely much better. The standard 2.4-liter engine and six-speed automatic transmission are more responsive with a better, smoother ride. It is more engaging than before. Perhaps it if the changes found in the instrument panel combined with something that feels a little better behind the wheel.

Pricing for the 2018 Sonata will start from $22,050 for an SE with the 2.4-liter engine. Even with a $100 increase in the base price, Hyundai states that the SE model now offers Blind Spot detection and Rear Cross-traffic Alert as standard. The 2018 Eco model and its 1.6-liter turbocharged engine will arrive before the end of 2017, with the revised Hybrid and Plug-In Hybrid coming in early 2018.

Aside from the promise of the two new and revised models from Hyundai, there was another surprise that this drive yielded. The roads selected for our brief runs with the 2018 Elantra GT and Sonata offered up a mix of winding roads through the region's forest preserves and some quick lanes on the Freeways and Tollways around Chicago. They serve as a great test for both cars strength and durability.

While the revised Sonata will do its best to compete with all-new products, such as the Toyota Camry and Honda Accord, it will be the Elantra GT that needs more of the spotlight than before. A good mid-sized sedan will strengthen sales for the brand and its class, but the compact hatchback class needs more attention. As customers look for alternatives to SUVs, they'll find the 2018 Elantra GT not only a great alternative to these popular vehicles. They could help boost the hatchback cause in this country.

In all, Hyundai has been moving the chains further – yes, a pun in reference to their sponsorship of the National Football League. I like where the design trends are going while showing they can directly compete with all of their competitors. Don't leave either car out of your shopping list!