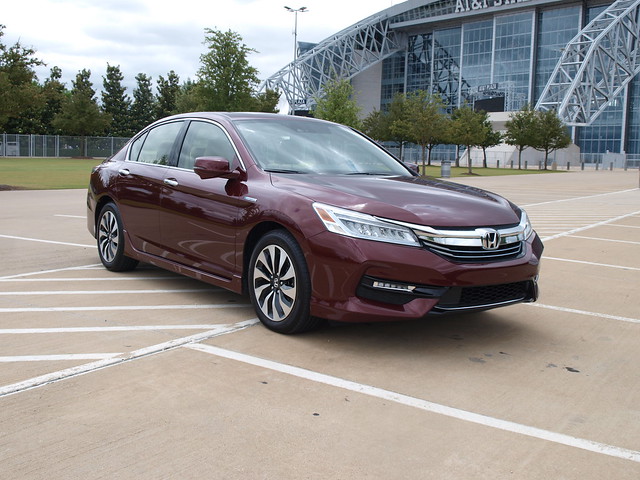 2017 Honda Accord Hybrid Touring sedan – All Photos by Randy Stern

For my Dallas Day Trip Challenge, I had envisioned doing so with a sustainable vehicle to honor Earth Day.

I think the right car was selected for this task. It was a hybrid – not an electric or fuel cell vehicle. With hybrids, there is more flexibility as to where one could go. It was also a mid-sized sedan – not exactly Texas-sized, but the right size and mix to get around the city and the suburbs. And, it had all of the active safety and technology features that would make driving in a new city easier to deal with.

What was presented for the several hours of this challenge was a 2017 Honda Accord Hybrid Touring sedan. It met my criteria…and then some!

For 2016, the Accord went through a mid-cycle refresh that brought out a bit more pizzazz and flash to its popular sedan. The grille became three-dimensional and more chrome was applied, with new LED tail lamps, interior updates and even bigger brakes. The updated Hybrid model was delayed by a year – a new addition to the 2017 lineup. 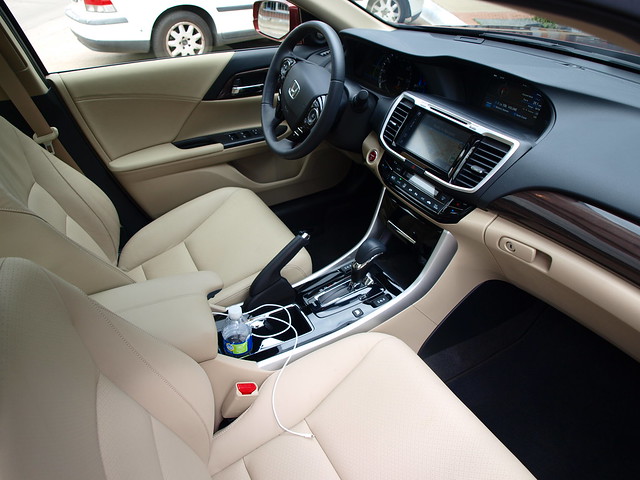 The Accord Hybrid sedan is offered in three trim levels for its reboot in 2017. Among the big news is the addition of Honda Sensing as standard on all Accord Hybrids. This suite of active safety features include Adaptive Cruise Control, Lane Keeping Assist, Collision Mitigation Braking System and Road Departure Mitigation System. Blind Spot Monitoring, a Rearview camera, Honda Lanewatch and Rear Cross-Traffic Alert are included in assuring the Accord Hybrid does not become a statistic at the Texas Department of Transportation.

The Touring model is at the top of the range offering a high level of equipment, including navigation, LED headlamps, front and rear parking sensors and rain-sensing windshield wipers. Considering how much luxury cars are revered by Metroplex consumers, this trim level fits right into a few places around town. However, in my travels, I felt that I was indeed the only car of its kind on the road anywhere within North Texas. I could be wrong, though…

Nonetheless, I enjoyed my short time in the Dallas-Fort Worth area in the Accord Hybrid. The Hybrid driveline underwent some updating for its return to the Accord lineup. Power was upped on the Earth Dreams 2.0 liter gasoline engine from 141 to 143 horsepower. That raised total system horsepower from 196 to 212. The system itself is of the same design of the gas engine, combined with an electric motor, a battery pack and a continuously variable transmission. All of this is melded into an integrated power management system. 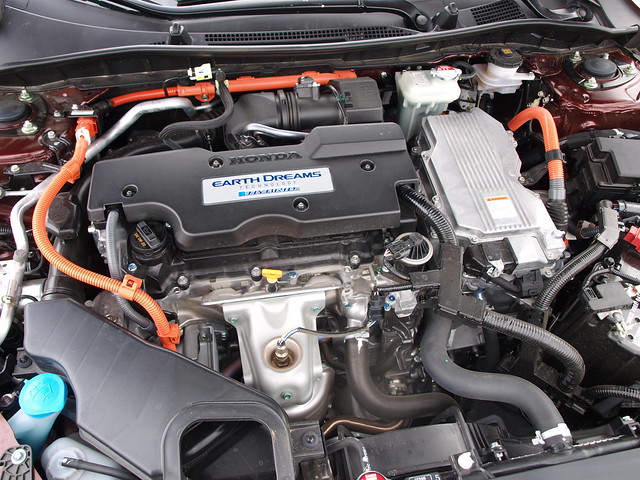 The result is improved performance that is smooth, quiet and up to snuff with Metroplex traffic. The transitions between the gas and electric motors were seamless and smooth. The ride was very smooth, with some resistance on rougher roads. Handling was soft, but compliant. Though I was not looking for any curves to carve out in the Dallas-Fort Worth area. Brakes were good with solid stopping power on normal and panic situations. The steering was also fine, with a decent turning radius and feel at the wheel.

The Accord Hybrid Touring was a nice place to be when fighting tourists along Dealey Plaza and out by Globe Life Park before the Texas Rangers would face the Kansas City Royals that evening. Ten-way power seating made for a comfortable command center through construction backups, re-looping around road blocks and piloting around the Uptown part of Dallas. I also like the leather upholstery that covers a nice driver's seat with a balance of comfort and support for runs across the Metroplex. It will seat four-to-five people comfortably, including a nice rear seating area.

Because the battery pack is positioned in the rear of the car, the rear seatbacks do not fold down. Instead, you have to make do with 13.7 cubic feet of trunk space. Rear liftover is pretty good for luggage – and overloaded backpacks to hide from suspecting eyes. 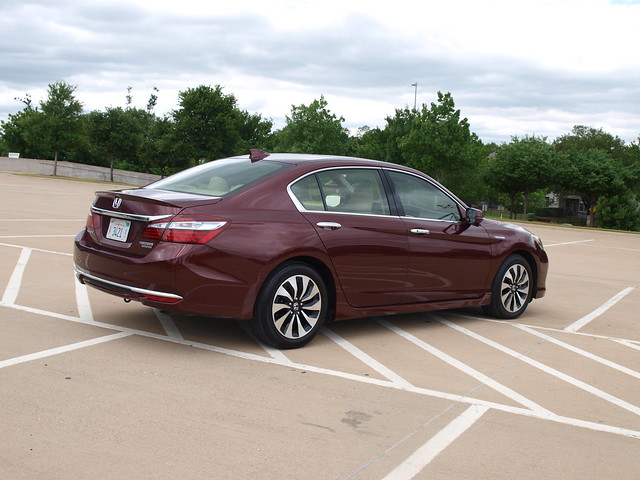 This car also came with a nice infotainment suite. It starts with 360 watts of power feeding into 7 speakers – including a subwoofer. It is all controlled by a familiar 7-inch touch screen with an additional static screen in the upper part of the instrument panel. Both screen are customizable, as is the the TFT and analog instrument binnacle. Still, I was able to have it set up where I got my fuel consumption, my audio channel or music file and navigation information where and when I needed it.

Which leads me to the most important piece of the Accord Hybrid – fuel consumption. The last time I worked with one, it was during the dead of winter a few years ago with sub-zero temperatures and poor road conditions. Because I turned an average of 33.8 MPG, I received a lot of flack from readers regarding my fuel consumption results. One thing I learned in this business is that owners of Hybrids and EVs are very passionate about their vehicles to defend them to the hilt.

However, I am happy to report that my fuel consumption in the Accord Hybrid did improve from my last experience. Granted, the weather was much nicer – temperatures in the 60s, some wind and party cloudy skies. Therefore, I averaged 43.1 MPG. I'll take that 9.3 MPG improvement any time, thank you!

As for the price, this combination of luxury, active safety, technology and sustainability can be had with a sticker price of $36,790 for the Touring model. For reference, the base price of the Accord Hybrid is $29,605. 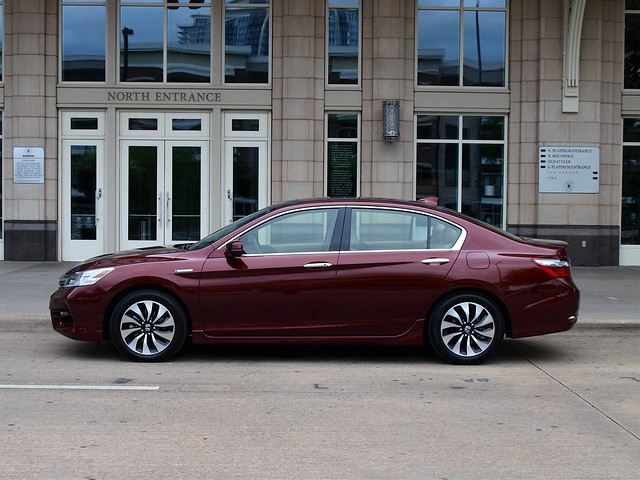 I must say how much I appreciated having the 2017 Honda Accord Hybrid Touring sedan as my steed during my short time in the Dallas-Fort Worth area. Everything about it seemed right for the occasion – not just because of Earth Day. Rather because its ability to perform well, providing the right mix of luxury, technology and sustainability to navigate around a region that relies more on the automotive than its growing public transport system.

Is the 2017 Honda Accord Hybrid is the right eco-friendly car for Texas? Based on my experience, I think it just might be.