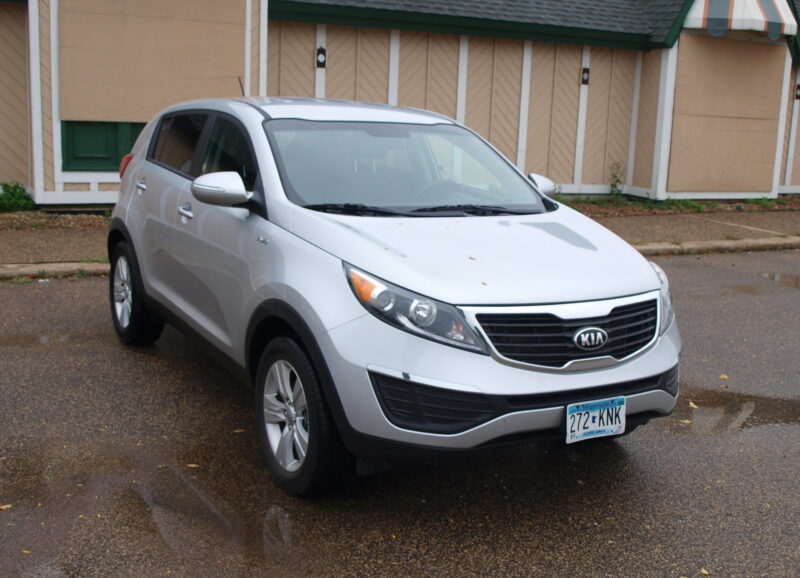 Lifestyle vehicles are exactly that – directed to facilitate your lifestyle.

Then, what are compact crossovers and SUVs? Could there be degrees of "lifestyle vehicles" amongst this growing segment?

There is indeed a difference amongst compact crossovers and SUVs. Conventional wisdom states that these vehicles are to be wagon-like. They would have proper liftgates, rear quarter windows and space for at least five people and their stuff. There are variances amongst these requirements, but only one defies convention within segment.

The Kia Sportage looks different than its competition. It was never the case for its past two lives, but Peter Schreyer's team decided to shake things up for its third generation model. The difference is noticeable out back with a sloping roofline and the absence of a rear quarter side glass.

It is because of this difference that brings us towards curiosity whether the Sportage can play in this segment.

The roofline and rear end defines the rest of the Sportage. Its front end has Kia's corporate design language – "tiger" grille, aggressive headlamps and big doors. It is a handsome vehicle, but one could conclude that it would look pretty awkward for its purpose. Regardless of opinion, there is an agreement that, yes, the Sportage is a looker.

The surprise is right inside those big doors. There is a lot of space for people and cargo. Four to five adults enjoy abundant room between two rows of seating. Behind them is more than enough cargo space to throw a week’s worth of luggage for a getaway.

The front seats has some bolstering, just enough to keep most bodies locked in. However, some people may find the bolstering not enough for them. The seatback does get a bit comfortable, despite the lack of lumbar adjustment and an upper back padding that might not work for taller drivers. Seat seats are just fine two adults or three children.

The instrument panel offers large dials behind a low cowl. Equipment levels are considered basic for Kia on this LX AWD model with an audio system featuring SiriusXM and Bluetooth phone connectivity. You can get a lot of the good stuff through optional packages and trim upgrades – including rearview camera, the UVO infotainment system, moonroof and power seat adjustments.

Two things let the Sportage down. The front seats are not exactly comfortable in the LX model. What they lack in lumbar support is pushed to the upper part of the seatback. There is not enough bolstering to keep bodies locked into their front seats. The lack of a rear quarter window and the slope of the roofline hampered an already challenging rear view. The rear window alone has only minute field of vision when looking behind you. To resolve this issue, you have to upgrade to the $1,800 Convenience Package with the rearview camera included.

Under the hood is the corporate 2.4-liter four-cylinder engine yielding 176 horsepower and 168 pound-feet of torque. It is not bad as it holds it own on the highway. There is quite a bit of noise from the engine even in mid-throttle. However, the standard engine does not feel weighted down by its 3,355-pound curb weight. A six-speed automatic transfers power down to all four wheels via a full-time all-wheel drive system.

Granted, the Sportage rides quite smoothly. The springs are more suited towards ensuring a nice ride across town, as it soaks up road imperfections along the way. Because of those springs, the Sportage corners with some lean and roll. The steering is quick and sharp, just like most Kias these days. Braking was good in normal stops, but panic stops required a bit more effort with the ABS acting overtime to gather the Sportage together.

For a stylish compact crossover, you might not be surprised to hear that it turned a 25.0 MPG fuel economy average. Despite the weight, Kia's four-cylinder engines proves to be flexibile and efficient.

The Sportage starts at $19,850 for a base model with a manual transmission and front wheel drive. This LX AWD sampler came in at $23,550. If you want more power and all the boxes ticked, the SX model with a 260-horsepower 2.0litre turbocharged engine, automatic transmission and AWD will set you back $31,250.

The Sportage may not be the choice in its class, but it is something different to choose from its competition. Whether it remains different enough for your lifestyle is truly in the eye of the beholder.

DISCLAIMER: Vehicle used for this review was not provided directly from the manufacturer, a distributor or a retailer. The vehicle was rented from the Avis Budget Group.