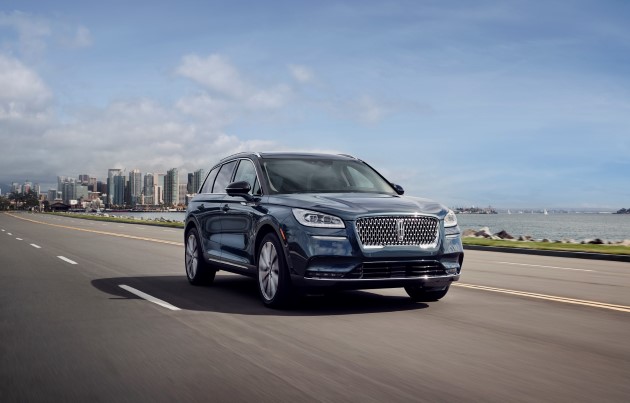 Two cities have been vying for our automotive attention this week. While Shanghai has been rolling out the more exotic stuff, New York offered up more things that are down to Earth – more like, down to our country’s consciousness.

Needless to say, my focus was already on New York. Not because they are introducing new products for our specific market, but of their significance. Rather, the manufacturers saved the best for the last major auto show in the Western world.

By the best, what exactly do I mean? Let me run down the six new vehicle debuts that will play a significant part of the upcoming 2020 model year. And, no, these are not aligned with the future "The Jetsons" laid out for us in cartoon-land.

LINCOLN CORSAIR: OK, Lincoln, you got me. You got my attention with your bold and architecturally-designed SUVs (plus, the Lincoln Continental) that offered a class above their competitive sets. The Corsair may be presumed as a shrunk-down version of the Aviator, but it will indeed stand by its own merits. Consider what it is up against – the BMW X3, Audi Q5, Lexus NX, Mercedes-Benz GLC, Infiniti QX50, Jaguar E-Pace, Alfa Romeo Stelvio, Land Rover Discovery, Range Rover Evoque, and Cadillac XT4. This class is crowded with anonymous naming conventions (except for the Alfa) and equally mundane design choices. The Corsair will stand out – not because it’s a Lincoln. Maybe because it is a Lincoln, which is now a good thing these days. All turbocharged power, loads of Co-Pilot360 safety tech, and expanded use of smartphone app technology will bring luxury customers towards the Lincoln Star.

CADILLAC CT5: While Lincoln is fortifying its SUV lineup, Cadillac is playing catch-up with its sedan products. The CT5 replaces the CTS and ATS sedan with a singular competitor for the BMW 3-Series, Mercedes-Benz C-Class, Infiniti Q50, Genesis G70, and so forth. It looks the part if you restrain yourself from going off on the C-pillar design and its sad attempt at following the “floating roof” trend. While turbocharged power is the order of the day for the CT5 – a single turbo for the 2.0-liter four-cylinder, and two turbos for the 3.0-liter V6 – the big news for the CT5 is Super Cruise. The almost-near-autonomous driving system seen on the larger CT6 is coming to the luxury sports sedan segment. And, you thought sedans were dead…

SUBARU OUTBACK: Chicago saw the 2020 Legacy debut. That’s great, but its ruggedized and lifted station wagon version is the brand’s top seller by a mile. Therefore, New York set the stage for the new Outback. It takes the Legacy’s lines and technology upgrades with a taller station wagon greenhouse, while maintaining Subaru’s standard ground clearance stance. The Outback will feature all new engines, including the XT turbocharged Boxer engine replacing the 3.6R six-cylinder boxer. With additional features seen on other new Subarus, expect this to continue to be the brand’s top seller for years to come.

TOYOTA HIGHLANDER: One thing I beg of you when you look at the new mid-sized, three-row SUV is to not call it a “super-sized RAV4.” Actually, I found more evolutionary from the previous generation but using current Toyota design elements to sharpen it up. The power remains with the gasoline-fueled 3.5-liter V6, but the Hybrid will switch to the more versatile 2.5-liter four-cylinder. It is designed to return improved fuel economy over the current Hybrid with the addition of a second electric motor to the mix for performance worthy of an SUV of its size. The upcoming Highlander will also benefit from the upgraded Toyota Safety Sense 2.0 and a new widescreen infotainment system, measuring at 12.3 inches. In other words, Toyota is not going to let the newest players in the segment take its thunder away. This 2020 Highlander is serious about playing ball with the competition.

MERCEDES-BENZ GLS: This is the next step in Daimler’s renewal of its SUV lineup. The GLS helped bring the Three-Pointed Star into the competitive large softroading segment. Now, it wants to stay competitive, even in the face of newer competition. The overall look is rounder, but not by much. Its size will tell you what it is right off the bat. This generation of "the S-Class of SUVs" will feature a V8 model with Daimler’s EQ Boost electrification system. Not to be outdone, the turbocharged in-line six-cylinder engine will also receive the EQ Boost system. Aside all of the usual high-end Mercedes-Benz technology and safety features, the GLS will now offer a Carwash button. That will prepare the GLS for entry into a full-service wash. Now, that’s clever!

HYUNDAI VENUE: The Kona won the North American Utility of the Year not only because it added an EV model alongside of it. It was an affirmation that Hyundai must be taken seriously for its growing crossover/SUV offerings. The Venue is its latest offering, measuring shorter than the Kona. Hyundai has touted the new SUV as upmarket urban communities with entrepreneurial consumers looking to maximize their lives through minimal means. In other words, this very small SUV is perfect for places, such as Fells Point in Baltimore, Uptown Minneapolis, and so forth where parking and rent are at a premium. There is some news to pass along: this small SUV will come in a manual transmission. For those of you of the three-pedal persuasion, I hope you’re happy.