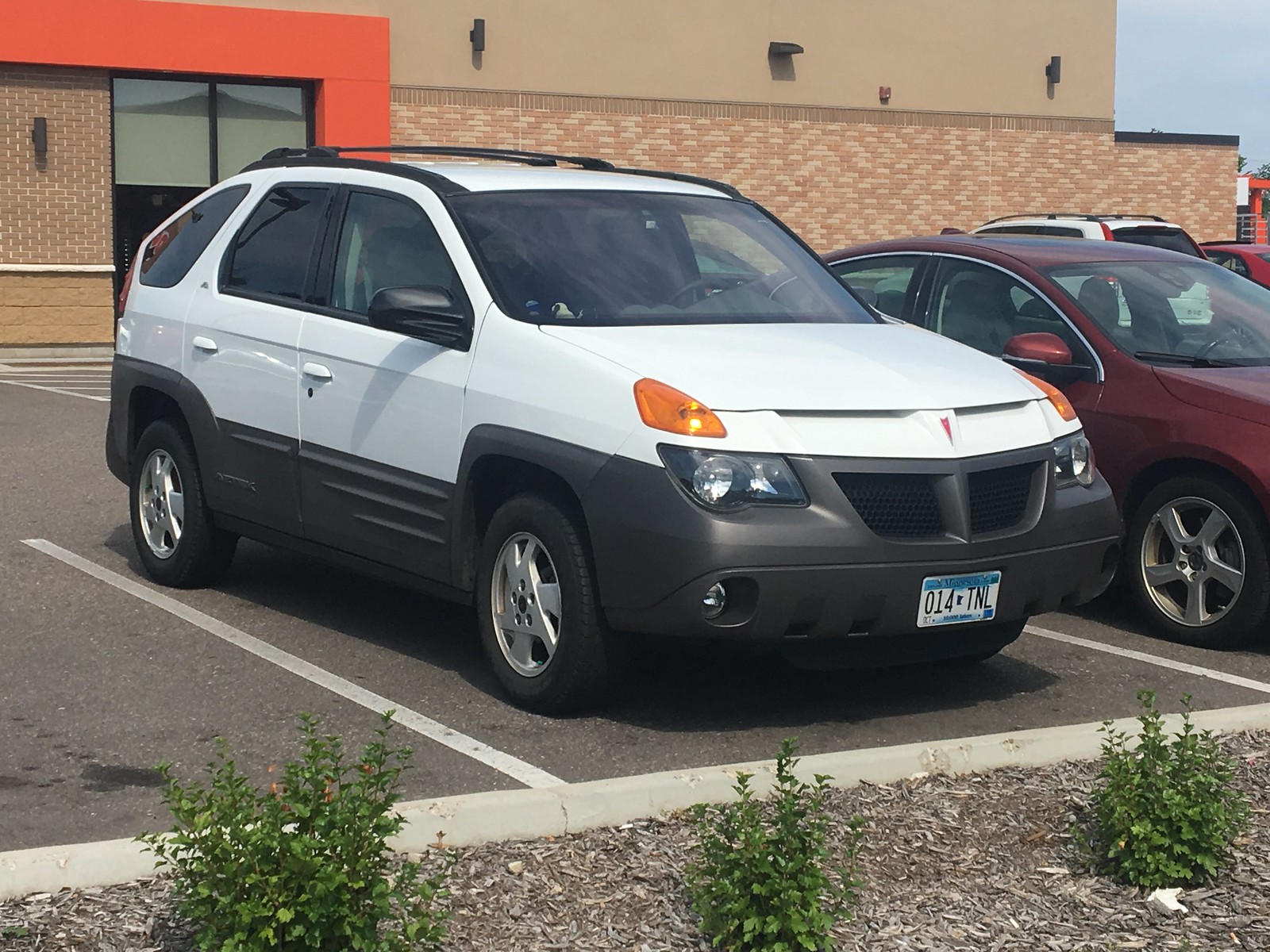 Have you ever looked at a vehicle out on the road – or in a parking lot – and wondered "why would anyone own such a thing?"

Sounds judgmental, right? It is…or, not.

The big thing about the vehicles we drive is that we choose it for a reason. Maybe it's the interior space. Maybe, it’s just very practical. Maybe because of what's under the hood. Maybe we don't care what we buy, as long as it gets us to wherever we need to be.

Picking a list of favorites means reaching deep down inside a path of comedic and tragic thoughts and circumstances. You can blame me for this list. But, if you own one of these vehicles – congratulations and good luck.

2001-2005 PONTIAC AZTEK: If you are a fan of "Breaking Bad" or Bryan Cranston, you get a pass. There are no guarantees that you will be celebrated as an Aztek owner. It was part of an early crossover phase that combined the minivan, SUV, and wagon into something that would be amenable for active lifestyle enthusiast. The result was the first winner of "Survivor" getting the keys to one. It looked different with its fastback-ish rear, split rear window, a mass of plastic cladding, more plastic inside, a silly backpack that served as a seatback pocket, and an available tent for the rear hatch area. But, hey, it had a V6 engine and available all-wheel drive. What could possibly be so wrong about that? Um, don't answer that…

2004-2007 CHEVROLET MALIBU MAXX: While there is a resurgence of the mid-sized hatchback sedan, at least this one tried. GM went with the global Epsilon platform for the 2004 Malibu. While it shared its underpinnings with the Opel/Vauxhall Vectra, the Ren Center's brass was more curious about the Signum version. The Signum was a larger hatchback version of the Vectra. Someone thought that it could be a part of the Malibu's lineup. We got an adapted version of the Signum, with adjustable rear seat and hatchback. Some said that it was well ahead of the curve. Others tried to argue that it was years too late for mid-sized hatchbacks in the USA. After all, the Corsica came in a hatchback. That one pretty much killed the species until the Audi A5 Sportback arrived. Too late or too early – you decide.

FORD's DEW98 PLATFORM, 2000-2008: What was the DEW98 platform? It was a rear-drive platform developed for mid-sized cars across the company. It was meant to be the new premium car platform for the new millennium. It first arrived as the Lincoln LS and Jaguar S-Type. Both tried to extend their brands with the BMW 5-Series and Mercedes-Benz E-Class in mind. Two years later, Ford created the retro-styled Thunderbird – a stretched modern roadster version of the 1955-57 original. Needless to say, that all three cars were doomed right from the start. The Thunderbird was simply too big for being a two-seat roadster, the Jaguar and Lincoln saw huge depreciation values because of design and production execution, and, honestly, no one was really buying them – were they?

1985-1989 CHRYSLER LEBARON GTS AND DODGE LANCER: This is one particular car that I actually liked. It was a mid-sized hatchback sedan geared for an upmarket customer, especially the LeBaron with its turbocharged engine and sporty demeanor. The Lancer ES and Shelby version also added some sporty flair to this design. Yet, it had a problem – the LeBaron coupe, convertible, and "regular" models were selling more units than the GTS. The Lancer was also surrounded by the likes of the Daytona and the Caravan. They were indeed practical, smartly executed, and fun to drive. Why didn't enough buyers get one was beyond me…

1995-1997 SUZUKI X-90: While built on the Sidekick/Vitara platform, the X-90 was seen as the replacement for the Samurai/SJ413. However, it only sat two people, had a trunk and looked more like a softroader than a proven off-road vehicle. It was simply too cute…replete with T-bar roof. Though its engine was adequate and had modern amenities, its soft looking design just didn’t give you the permission to use it on the farm or on the ranch…or, anywhere a Suzuki Sidekick or Samurai can go. I know that you really like the X-90 – and I do apologize for its presence on this list. But, understand why it is on here.

2014-Current FIAT 500L: It should be a fun car to own. It should also be a great family vehicle with the right of amount of tech. There are plenty of shared components between both sides of the Fiat Chrysler Automobile corporate family to make it a solid buy. Unfortunately, it had been dogged with quality issues, partly thanks to its Serbian production. It also had its share of drivability issues that make it a bit on the flipside to truly enjoy. And, yet, it had been criticized for taking the iconic look of the Cinquecento and stretching into some MPV. Poor 500L…

1994-2002 HONDA PASSPORT: There's badge engineering. Then, there's being bloody lazy. Before Honda realized that it can make an SUV, they borrowed one from Isuzu to sell through their dealer channels. The Rodeo is a very capable vehicle that had some input from its General Motors partnership. It sold well as an Opel, Vauxhall, and Holden in their respective markets. However…and did I miss the memo that Isuzu had some sort of joint agreement with Honda? So, why would you get a Honda-badged Isuzu Rodeo (or the Acura-badged Trooper) because of that badge? Why not get the real thing?