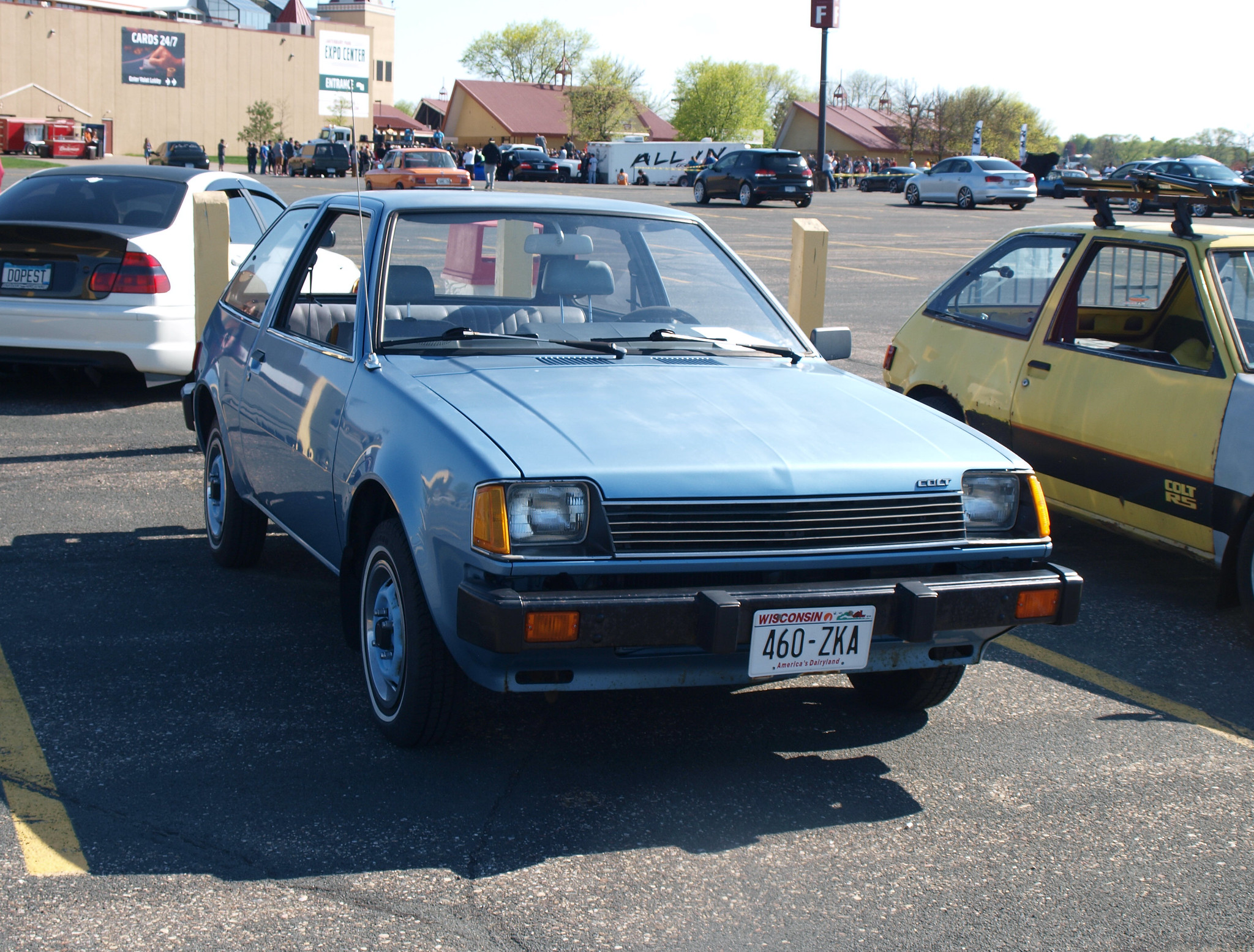 At a time when the call was to tune down the horsepower and prepare for an oil crisis, a recession and a never ending war overseas, domestic automakers figured it was high time to build another round of compact cars. By going smaller, there were two routes to take: Build them domestically or import them from a global partner somewhere. Three out of the four North American automakers chose the latter.

Captive imports…and why did they exist in the first place?

At a time when the call was to tune down the horsepower and prepare for an oil crisis, a recession and a never ending war overseas, domestic automakers figured it was high time to offer another round of compact cars in the marketplace. In order to achieve this, Detroit's "Big Four" had two choices: Build them domestically or import them from a global partner somewhere. Three out of the four North American automakers chose the latter.

Chrysler had been selling Simcas and Sunbeams alongside Barracudas and Imperials through the 1960s. Simca and Sunbeam were a part of growing European operation for the Pentastar. In turn, Chrysler looked high and low to match the incoming compacts from General Motors, Ford and American Motors. They went across both the Atlantic and Pacific for their answers. Ford sold some European products at their dealerships in the past – the Cortina was the most popular and the Capri was a mainstay at Lincoln-Mercury dealerships. GM sold Opels at Buick dealers, but would soon play the captive import game as early as 1971.

You could also stretch the captive import involvement to AMC – that is if you include the subcompact Metropolitan that was jointly developed between Nash and Austin. They actually sold Metropolitans with the Hudson badge for a bit. At one time, Mitsubishi imported the Hyundai Excel for some of its dealers in the USA.

Did it make sense for a North American automaker to use captive imports to fill the gaps in its lineup? Back then, the idea of the "world car" was essentially bogged down by politics within each company at every major unit within it. Alliances between sovereign companies were also commonplace – in some cases leading to corporate mergers. It wasn’t until recently that we are seeing true global products that are built on a single basic specification everywhere it is sold.

The practice of selling captive imports continues today, but not in the USA and Canada. For example, Dodge sells Hyundais through its Mexican dealers, while Renault, Nissan, Dacia and Samsung interchange models in several global markets – though they are intertwined in their own alliance.

It was a good opportunity to shill out another Five Favorites amongst the imported vehicles that had familiar North American nameplates on them. They may be gone and somehow forgotten, but we had our fun with them while it lasted.

DODGE COLT/MITSUBISHI GALANT: Chrysler saw that compact sedans were the wave of the future. Instead of developing a domestic answer to the Chevrolet Vega and the Ford Pinto, they went to a couple of partners for some captive imports. Plymouth received the Hillman Avenger from the UK and named it the Cricket. Yet, Dodge dealers had the better part of the deal. Mitsubishi began a partnership with Chrysler that would last well into the 2000s. The first fruit of their partnership was the importation of the Galant sedan as the Dodge Colt – using the popular brand name for Mitsubishi. Compared to the Datsun 510 and Toyota Corolla, the 1.6litre Colt simply moved the bar for the segment. It was cleaner looking and had a few technological tricks up its sleeve – for 1971, that is. Though the Colt nameplate continued to 1994, the actual car was shifted from one Mitsubishi platform to another. In the late 1970s, the sedans were actually the smaller Lancer models, while they sold the Galant wagon at Dodge dealers. In 1980, the Colts were switched again to the Mirage – a small front-wheel-drive car aimed at the Nissan 310, Toyota Tercel and Mazda GLC. Even the Chariot MPV was sold as the Colt Vista when they arrived in the mid-1980s. While the Colt introduced North America to Mitsubishi, they still sold in solid volumes even after the Japanese company began selling vehicles under their own name at the end of 1982.

BUICK OPEL BY ISUZU/ISUZU GEMINI: The T-car project was supposed to be an all-out international effort. It did spawn a generation of compacts for GM, including the Opel Kadett C and the Chevrolet Chevette. One of GM's partners in Japan, Isuzu, was also a recipient of the T-car project. Their version looked similar to the Kadett C – which was by no accident. That was why Buick at first sold them as Opel Isuzus before switching the name to Buick/Opel. The Gemini was a direct competitor to the Datsun B210 and Toyota Corolla on both sides of the Pacific. In fact, some might say that Gemini, along with its Holden and Daewoo variants, sold even more units than any other GM entity on the T-car platform, save for the Chevrolet Chevette. Buick’s Gemini had a 1.8litre engine that propelled the rear-drive T-car competently. Styling wasn't bad, either. Sales began in 1976 and ended just when the buzz around the new front-wheel-drive X-car exploded with the presence of the Skylark. When American Isuzu began selling vehicles under their Japanese parent’s name in 1981, the Buick Opel was reborn as the I-Mark…with a diesel engine, to boot.

DODGE CHALLENGER/PLYMOUTH SAPPORO/MITSUBISHI GALANT LAMBDA: The original Challenger stopped production in 1974. They were gone, but not forgotten. Chrysler still wanted to sell a coupe that might remind anyone of the Challenger (and Plymouth Barracuda), but in a "modern" sense. They went to Mitsubishi for such a coupe. The Lambda was based on the Galant of the time with its unique blend of folded shapes and overt luxury. For 1978, the North American versions were marketed a bit differently despite having the same mechanicals. The Challenger had a more aggressive look with a distinct grille, stripes and alloy rims, while the Sapporo had more of a Chrysler flavor than a Plymouth. Under the hood was Mitsubishi’s best engine: A 2.6litre mill with balance shafts and a third "jet" valve into the cylinder chamber. In all, they did not sell, well, despite excellent feedback from the motoring press. Chrysler dropped the twins in 1982 to make way for a slew of domestically developed and built products off the K-Car platform.

CHEVROLET SPRINT/SUZUKI CULTUS: For 1985, GM began to introduce vehicles to supplant the rear-wheel-drive Chevette (and Pontiac 1000). To do so, they had to catch up with their Asian competitors with front-drive products that were efficient and affordable. GM came up with a three-pronged plan. In the East, Chevrolet dealers sold a version of the Isuzu I-Mark (Gemini) called the Spectrum. Meanwhile, Toyota joined in on GM’s old plant in Fremont, California to produce a bowtie-badged version of the Toyota Sprinter (another variation of the Corolla), the Nova. On the West Coast, GM brought in their partners, Suzuki, for an even smaller car: The Sprint. Sold as the Suzuki Cultus back in Japan, the Sprint had the only three-cylinder engine sold by a domestic automaker. This 1.0litre three-pot benefitted form a power-to-weight ratio that made this little car massive fun. Soon, a turbocharged version was added and Suzuki began to sell a version of the same car in North America. The Sprint was simply pure – turbocharged or otherwise. By 1988, the blocky Sprint would give way to the curvy and cute Geo Metro.

FORD FESTIVA/KIA PRIDE: In the 1980s, Ford had its paws in many different places. In Asia, Ford had a longtime partnership with Mazda. Both companies developed efficient automobiles for the Asia-Pacific market, but rarely ventured beyond their side of the Pacific. In turn, Mazda also partnered with Korean automaker Kia – another partner of Ford. Between these three companies was Ford’s first small car since the European Fiesta was pulled from the market in 1980. Starting for 1986, the small Ford Festiva was also sold as the Mazda 121 and the Kia Pride in various global markets. The Festivas sold in North America had a 1.3litre Mazda engine powering the diminutive car. The truth is, these little cars were very well done. They were found to have good quality and were extraordinarily reliable. There are still Festivas running in North America, though they stopped selling this model in 1993.