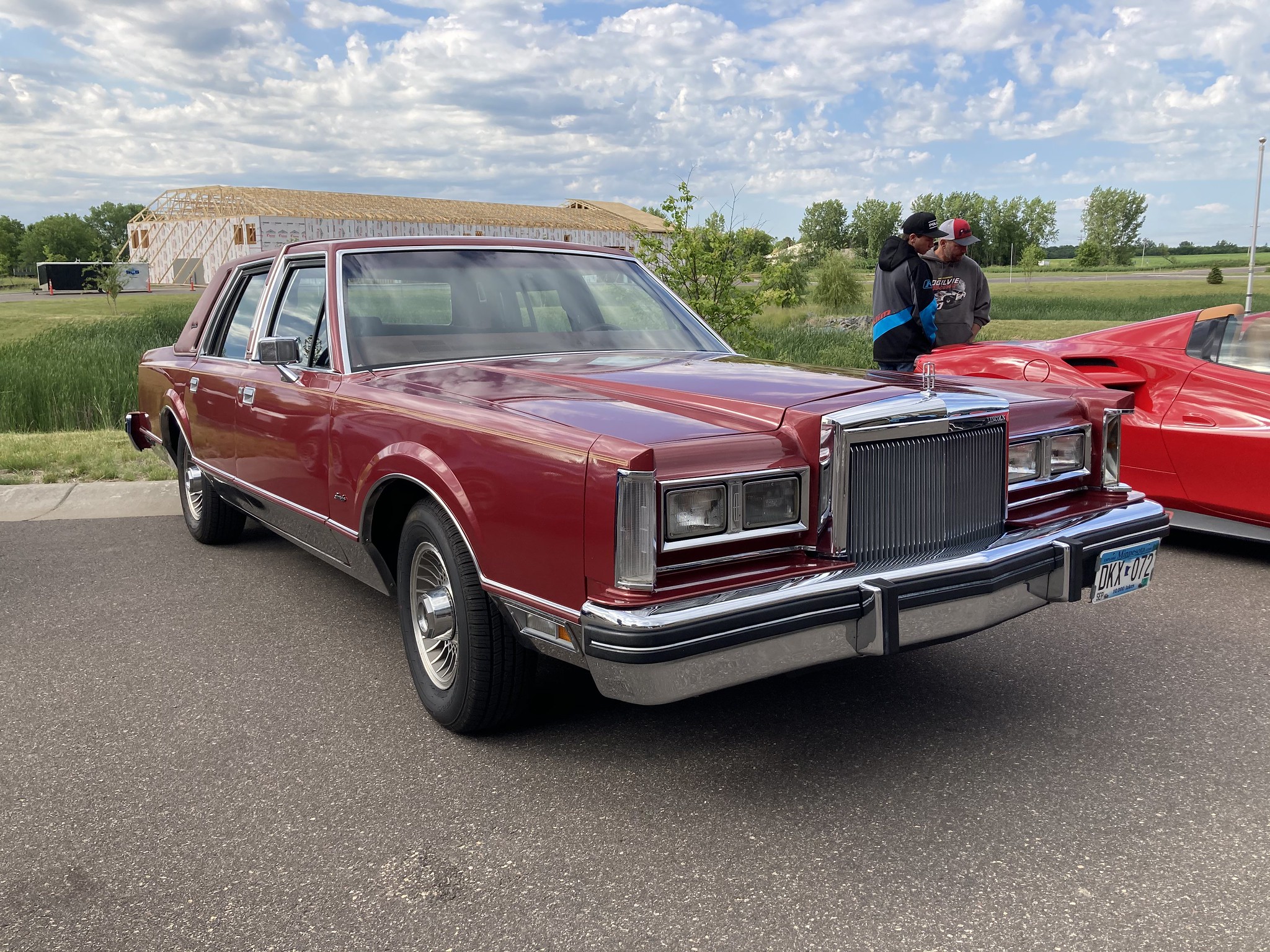 It wasn't easy. I failed the first time – on my birthday. I took it hard, but I went back in the saddle and tired again. In April, I passed my driving test and was given my license. It came in the mail weeks later.

Just like most Californians, I earned my driver's license at age 16.

It wasn't easy. I failed the first time – on my birthday. I took it hard, but I went back in the saddle and tired again. In April, I passed my driving test and was given my license. It came in the mail weeks later.

A proud moment, I must say. Not exactly a sterling record since, but with one ticket currently on my record from 2008. Luckily, I had no DUIs or any other major violations recorded on my driving record throughout my 32 years of licensed driving.

The world of 1980 was one in the midst of transition. The economy was already unstable and all blame went onto the shoulders of President Jimmy Carter. It was election year after all that would see the ascension of Ronald Reagan into the White House.

Oh, and we had a little standoff in Iran. Hundreds of U.S. Embassy workers in Teheran were under captivity by a group of pro-Khomeini rebels. Carter couldn't get them out to save his whole Presidency.

As British Punk turned into Ska and New Wave, Orange County and L.A. Punk skyrocketed into our speakers. Hip-Hop was boosted by a radio-friendly hit from the Sugar Hill Gang as all of New York (and everywhere else) geared up for their moment to shine. Disco was dead, but Funk still pumped through my stereo system.

Even worse off was the automotive industry. Perpetual challenges from quality issues, labor strife worldwide and companies almost going under created a sense of uncertainty at the dawn of a new decade. Though Chrysler was saved by a loan guarantee from the U.S. Congress, British Leyland had to split into two in order for it to survive Prime Minister Margaret Thatcher's threat to cut off their funding to the company.

What automobiles made their way through all of this? What new vehicles would I have wanted if there was more than enough money to spend to do so? Here are a few favorites from 1980!

HONDA CIVIC: The first generation model lasted quite a long time – through most of the 1970s, to be exact. It served Honda well as a platform for a new engine head design that induced better efficiency overall. It gave North Americans a winner, and a launching pad for other Honda models. How do you follow up on a winner? To continue the success, the sequel has to be equally good, if not better. The 1980 Civic sharpened up the design on the old model. There was actually more glass area than before, if you put the first and second generation Civics together. Then, you improve every little thing on the Civic – interior space and design, engine performance, suspension…and so forth. Then, you surprise everyone with one big thing – a four-door sedan. If there was good car that came out of the 1980 model year – one that did not have quality issues or was simply not well executed – the Civic was it. The world responded in kind by buying almost every last one of them that year.

AMC EAGLE: Back in 1969, American Motors decided to retire the Rambler name along with the American "compact" sedan. Instead, AMC created the Hornet – a modern version of the Rambler American. The Hornet was a nice design that it lasted for almost two decades. During its time, it had its rear end cut off for the Gremlin, a wagon with a hatchback-style liftgate and a coupe with a rear hatchback. By 1977, AMC had to do something with the Hornet and Gremlin. They regurgitated both models into the Concord and Spirit respectively. However, AMC was not done. They decided to graft Jeep's four-wheel-drive system onto the chassis of the Spirit and Concord to create a crossover vehicle (yes, I said "crossover"): The Eagle. AMC joined Subaru in crafting a four-wheel-drive car-based vehicle that was capable of doing thing away from the tarmac. Ground clearance was raised to allow the Eagle to tackle conditions that were less than friendly to the average automobile. In all, the Eagle worked. It actually survived the Renault years, but had to be euthanized by Chrysler in 1988. The Eagle's legacy resonated as other automakers tried their hand at creating car-based four-wheel-drive vehicles from that point onward. Simply put, the Eagle made it easier for everyone else to try.

LINCOLN CONTINENTAL/TOWN CAR/MARK VI: The Panther platform made its presence known the year before when Ford finally downsized the LTD and Mercury Marquis for North America. Ford was not done by any means as it had to create downsized Lincolns to join the big Fords and Mercurys. The downsized Continental was being primed for a new role – domination over Cadillac. The traditional big sedan would be roomier than before, but in a trimmer skin and chassis. Its main engine was the 5.0litre V8 with a brand-new four-speed automatic transmission. This particular year saw the appearance of the 5.8-liter V8 – which would be gone for 1981. Another significant change for 1981 would be the big Lincoln’s name – switching from Continental to Town Car. On the same platform is the latest iteration of the Mark series – the Continental Mark VI. What was unique about this rendition was the addition of a four-door version to its traditional long hood two-door model. Granted, the four door's rear access was not as generous as the Continental/Town Car's, but it gave consumers in the personal luxury field an option for a change. What made these Lincolns worth their weight was not of Ford's own doing. It appeared that for every miscalculation Cadillac made – making the faulty diesel engine standard on the neo-classical Seville and the V8-6-4 engine – turned into a gain for Lincoln. Though meek compared to previous iterations, these Lincolns became winners for Ford when they needed one in the luxury car field.

FERRARI MONDIAL 8: You remember the scene: Tom Selleck jumps into Robin Masters' 308GTSi as the cameras panned with every wheelspin on Oahu’s roads. He's out to solve crimes and get into trouble at every turn with his ex-military buddies only to frustrate John Hillerman's character at Robin's Nest. The star may be Tom himself, but it was also the red Ferrari that shared the spotlight. The 308 series became the biggest selling road car Enzo had to make. Yet, the old master knew that his road cars made money for his racing exploits – namely the Formula One racing team, Scuderia Ferrari. In its prior iteration, the 308GT4 was decried as a "Dino," not a real Ferrari. The mid-engined 2+2 was an exercise in patience by Enzo and the team in Maranello. Yet, to continue to fund the Scuderia, a new version of the mid-engined 2+2 was made – the Mondial. The reason why this version was given any attention was the fact that it shared the fabled driveline of the 308GTBi/GTSi. It was considered "practical," a relative term for eight-cylinder Ferrari road cars. The short time it graced our roads, the Mondial extended the eight-cylinder road car aura by fusing the best from the 308 into a modern, Pininfarina-crafted shell that dictated Ferrari design for the next decade. For being overshadowed by "Magnum P.I."'s ride, the Mondial foretold the future of Ferrari's road cars.

FIAT PANDA: Some of you may be laughing now as to the mention of the little Fiat. Yes, we did not get these stateside, but these little cars could and did everything you asked it to do since the Panda's striking debut 32 years ago. It was the first "supermini" with its engine installed in front, driving the front wheels. It ended decades of rear-engined city cars – beginning with the iconic 500. The car was designed to be made simply and inexpensively anywhere Fiat is sold – a first, since they would normally sell off old castings and so forth to other manufacturers. Though designed by Giorgetto Giugiaro, the Panda was a car for the people priced inexpensively, offered no frills and could be run for ages with little money to put into it. Engines ranged from a miniscule 0.7-liter air-cooled two-cylinder to a water-cooled 0.9-liter four-cylinder from the old 127 – both available with a four-speed manual gearbox. It was seen as a modern day Citroen 2CV and Renault 4 – both very simple automobiles that continued to find buyers even in the face of the Panda's arrival. Production of the first generation Panda lasted 23 years with 4.5 million made during its run. If one wanted a revolutionary vehicle for its time, one would look no further than the little Panda and how it continued the tradition of the "peasant car" for the 1980s and beyond.