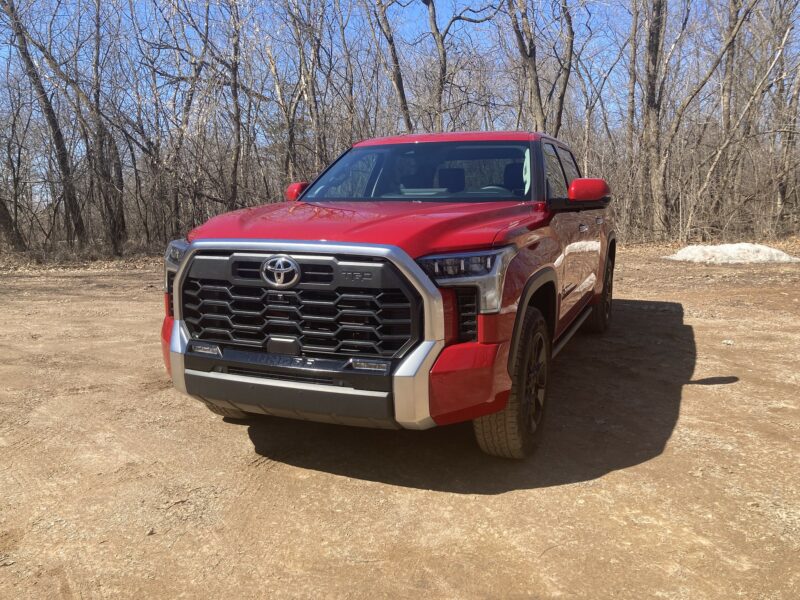 There is cause for celebration here. The reason? After 14 years of production, Toyota finally introduced a new Tundra.

There is cause for celebration here.

The reason? After 14 years of production, Toyota finally introduced a new Tundra.

This is truly worthy of note. Consider when the second-generation Tundra was first introduced in 2006, the full-size half-ton pickup truck market was a different place. Its competitors lacked the polish and elevation that they have now.

Some manufacturers played with some innovation in the pickup truck space, but they realize that most of the customers would use their trucks for work rather than for recreational use. More so, as the primary family vehicle replacing a sedan, wagon, or an SUV.

Of course, things change. The full-size pickup truck was elevated where higher expectations were met. Consumers wanted from their trucks. In turn, they delivered. Well…almost everyone did.

I have nothing against the previous generation Tundra. The first time I drove one, I thought it was a fun full-sized half-ton pickup truck that exuded some old school qualities even wrapped in an aging skin. The V8 engine wanted to leap out of the hood from its frame. It rode like an older pickup truck, which was nostalgic in its own way.

It was a matter of time until Toyota had to crack the code of the full-size, half-ton pickup truck. How could they design, engineer, and produce a truck that is at least on par with Ford, General Motors and Stellantis? Rather, to a lesser extent, Nissan.

Because if this quest, the San Antonio, Texas-built Toyota Tundra underwent massive changes for 2022. But, have they finally met the challenge of their competitors in. the full-size half-ton pickup truck segment?

The highlights are many, but the 2022 Tundra is built off a stronger fully-boxed frame. Toyota also installed a fully independent multilink rear suspension, joining the Ram 1500 and the Ford F-150 Raptor in doing so. The i-FORCE V8 was replaced by a new series of engines using its namesake. All of this lies underneath a new exterior and interior design that also pushes the envelope in its class.

That new exterior design starts off with the biggest grille in this segment. This is not just for aesthetics. Having a larger grille induces more airflow into the engine area. The grille is flanked by a set of LED headlamps and turn signals that run sequentially.

The roofline starts with a rakish windshield angle and finishes off with four large opening doors on this CrewMax version. In all, it means business. The five-and-a-half-foot box is standard on CrewMax models. The rear taillights are also LED and has a sequential operation for the turn signals. Aside from the chrome-and-plastic step bumper, you can put your foot down to lower a step up on the driver side corner.

This Limited trim tester came with the TRD Off-Road package. This package includes a set of 20- inch alloy wheels, identifying trim inside and out, an off-road suspension using Bilstein shocks, additional skid plates, and mudguards. To augment this package, my tester added Multi-Terrain Select, Crawl Control and Downhill Assist Control into the mix for better off-road control.

Inside, you’re greeted by a huge 14-inch infotainment screen. It simply dominates the entire cabin. It offers a lot of functionality, including wireless smartphone integration, wireless device charging, and on-board Wi-Fi. Sound is complimented by a 12-speaker JBL system.

Inside the Limited trim, you get a set of analog dials inside the instrument cluster, along with the requisite digital information screen. There are multiple buttons and controls throughout the cabin that offer solid logic and touch. I appreciated the fact that they moved the electric parking brake to the center console within reach. That, along with a real shifter for the transmission and a mass of storage spaces make the Tundra a livable pickup truck.

The SofTex upholstered front seats are large and offer plenty of comfort and support. Whereas the rear seat has room for three adults with more than ample head and leg room. You fold up the rear seat cushions to utilize the storage options below and to access the jack and tools needed to change the tires.

As I mentioned before, the i-FORCE branding is used for a new set of powerplants based around Toyota’s corporate 3.5-liter V6. In this tester, they added two turbochargers to this engine, giving it 389 horsepower and 479 pound-feet of torque. This engine is connected to a 10-speed automatic transmission and a four-wheel drive system with a two-speed transfer case.

Compared to the last generation’s V8 engine, there is improved acceleration and overall performance. It also feels as the engine is bolted better to the frame.

there is more upfront performance and improved acceleration. it is also quieter even with the raspy piped-in exhaust note. And, unlike the previous generation of the Tundra, the drivetrain is solidly attached to the frame.

In this configuration, the maximum tow capacity is 11,120 pounds with a maximum payload rating of 1,740 pounds.

Because of the new independent rear suspension, the ride quality is much better overall. The way the Tundra handles rougher sections of road has greatly improved over last generation’s model. Handling is much more controlled with some lean and roll when you push the limits on the curves. Of course, I would have to remind you that, yes, it is a pickup truck, and one should drive accordingly.

The brakes were fantastic, offering a solid pedal feel and great response to the wheels. The Tundra returned good normal and panic stops.

The steering system is where we had several concerns about. The turning radius was considered average among full-size half-ton pickup truck, as does the on-center feel. It will take several turns to get out of tight situations.

The 2022 Toyota Tundra comes in seven trim levels with two cab choices, three bed sizes, and three engines. Pricing for the Tundra lineup starts at $35,950. Our Limited tester with the CrewMax cab, 5-1/2-foot box came and TRD Off-Road package came with a sticker price of $60,188.

Let’s go back to the question posed earlier in this article about whether Toyota has cracked the code on creating a competitive, if not segment-matching – or, leading – full-size half-ton pickup truck. In their own way, I believe they did.

By stating that, Toyota took what they know about producing pickup trucks and made major steps to elevate the Tundra. I can confirm that the job Toyota did to this pickup truck was definitely in the right step forward. It is a solid pickup truck with an equally solid frame, driveline, and design.

Understanding that this segment commands loyalty to their chosen brand and that conquests are rare amongst these brands. However, if you find yourself interested in what the Toyota Tundra can do in contrast to what you’re currently driving – you better find one quick! When you do get behind the wheel, I’d be curious what you think about this newest entry into this high volume and high stakes segment.