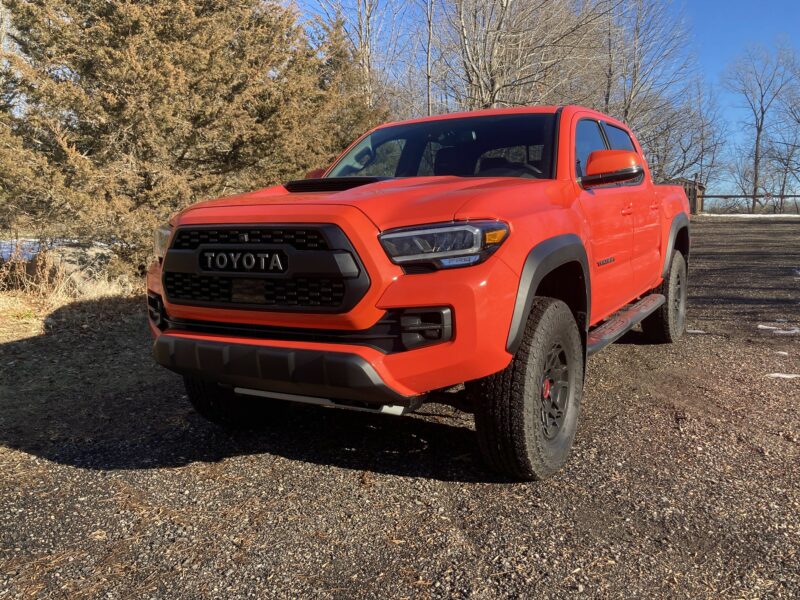 Yet, it yields plenty of challengers. Some figuring out how to out-Tacoma the Tacoma. They are trying new approaches to the same formula.

Every time you think “midsize pickup truck,” your mind defaults to the Toyota Tacoma.

C’mon…admit it! That’s how your mind works!

It is because the Tacoma is the top seller in its class. There are still a lot of them on the road. They are engineered to be tough, reliable, well made, and ready to work or go out and play.

Yet, it yields plenty of challengers. Some figuring out how to out-Tacoma the Tacoma. They are trying new approaches to the same formula.

No matter how they tried, there’s nothing like a Toyota Tacoma.

It’s not the most luxurious truck in the market. Nor it is the most powerful one. It is not supposed to be any of the above. It is a solid performer that puts in the work and make playtime even more fun. That’s all one should ask about from their Toyota Tacoma.

Once you figure out your choices, then you can out one on the road – or off of it.

What would be my choice? If you know my tastes in pickup trucks, then you look no further than the TRD Pro. I like my trucks to be capable to handle off-road situations to get me out of trouble. I also like my trucks with aggressive exterior bits that tell the world that I’m not here to mess around and play games.

“Butch” is a word to describe the Tacoma TRD Pro. Certainly, its personality speaks volumes to what it can and will do.

Would “masculine” work better? Does it have it have a binary? Do you need to overcompensate your own insecurities by driving one?

Why question what the personality of the Tacoma TRD Pro offers to its driver? It is the kind of truck that encourages you to live your best life.

It is not as big as a Tundra TRD Pro or F-150 Raptor, which may work to your advantage in some cases. Being a midsize pickup truck means you can fit in parking spaces better – or though gaps in the forest that would scrape up the paint of a larger truck.

For 2023, Toyota adds a fun color to the Tacoma TRD Pro’s mix – Solar Flare. It’s a shade of orange. Perhaps, Blood Orange. Nonetheless, it confirms that orange is a great color for an off-road ready pickup truck. It shows high visibility even in the darkest of night.

I also noticed a new graphic on the hood behind the front-facing intake scoop. It shows a topographical relief of some kind. This fits in the overlanding trend that has become the norm since COVID-19 first reared its head onto the universe.

The last time I drove a Tacoma TRD Pro, it had 17-inch wheels. This time around, my tester was shod with 16-inch Goodyear all terrain rubber on TRD-specific alloy wheels. A smaller wheel offers up a taller sidewall, which translates into greater protection and support for the vehicle off road.

Everything else just looks familiar. The heritage grille design spells our Toyota, while you will find the TRD Pro wordmark wherever you see it.

Same goes for the interior. There have been no real upgrades since the last time I drove a Tacoma TRD Pro. The interior is leather trimmed with an interesting surface for the cushions and seatback inserts. Not exactly neoprene, but it looks like it could wash up nicely and dry quickly. There is a set of six JBL speakers emitting the sound from the eight-inch touchscreen infotainment system. Smartphone integration enables you to play your favorite tracks loudly in the cabin.

There are some honest “old school” touches I love in the Tacoma. The notched transmission shifter, along with big analog dials and a handbrake are among the simple things in life to be appreciated in a Tacoma. I like them all the same!

This time around, I felt comfortable behind the wheel. I found a nice balance of head and leg room after complaining over the past several years about the cab’s space inside. It does come with a penalty, as there is not much room behind me in the second row. Maybe a small-sized adult or a child.

As for drivability, it’s smooth on the tarmac. You can thank the FOX Internal Bypasss coil-over shock system and the overall TRD Pro suspension set-up for making things smooth. This set-up is actually designed to soften the blow of rougher surfaces. The same could be said on rougher roads – including paved ones.

So what if the 3.5-liter V6 inly puts down 278 horsepower and 268 pound-feet of torque? So what if there’s only six gears in the automatic transmission? So what if I have to turn a knob on the dashboard to switch for 2WD-HI to 4WD-HI? And, so what if I was able to get only 17.2 MPG on average from this truck? Heck, that’s even better than before!

I am not asking this Tacoma TRD Pro to be fast as a Raptor or even a Ram 1500 TRX. What it is supposed to do is to get you through everything you put it in. It does not have to be rapid – just strong enough to get you there.

As far as maneuverability goes, I might not excuse the Tacoma’s turning radius. In this case, I expected it. I prepared for it. And, I’m OK with it. Same with the brakes. I found that they modulate better than before, and the pedal feel more confident.

The base price for the 2023 Toyota Tacoma TRD Pro is $46,685. That comes equipped with the standard six-speed manual transmission. However, my Solar Flare tester with the automatic transmission came with a sticker price of $52,558.  The 2023 Tacoma starts from $27,250 with a choice of in seven trim levels, two cab/bed configurations, and either a manual or automatic transmission.

There are plenty of reminders how the Toyota Tacoma remains the leader in its class. You can certainly work in one. However, the right trim level will let you go out and play all of the time. Or, at least make you think you can.

That is why I love the TRD Pro model. It elevates the Tacoma into a fun-inducing truck that wants to go everywhere – even runs to the store. Or, to the doctor. In fact, getting in and out of the Tacoma TRD Pro was no problem for the nine-toed automotive journalist. That’s saying a lot here!

I love pickup trucks. I’m glad to get another chance to run a Toyota Tacoma TRD Pro. It is one of those vehicles that never has to apologize for what it is. I will admit being concerned about access to the cab. That was proven wrong. Which made my time with the Tacoma TRD Pro a very enjoyable one over Thanksgiving.