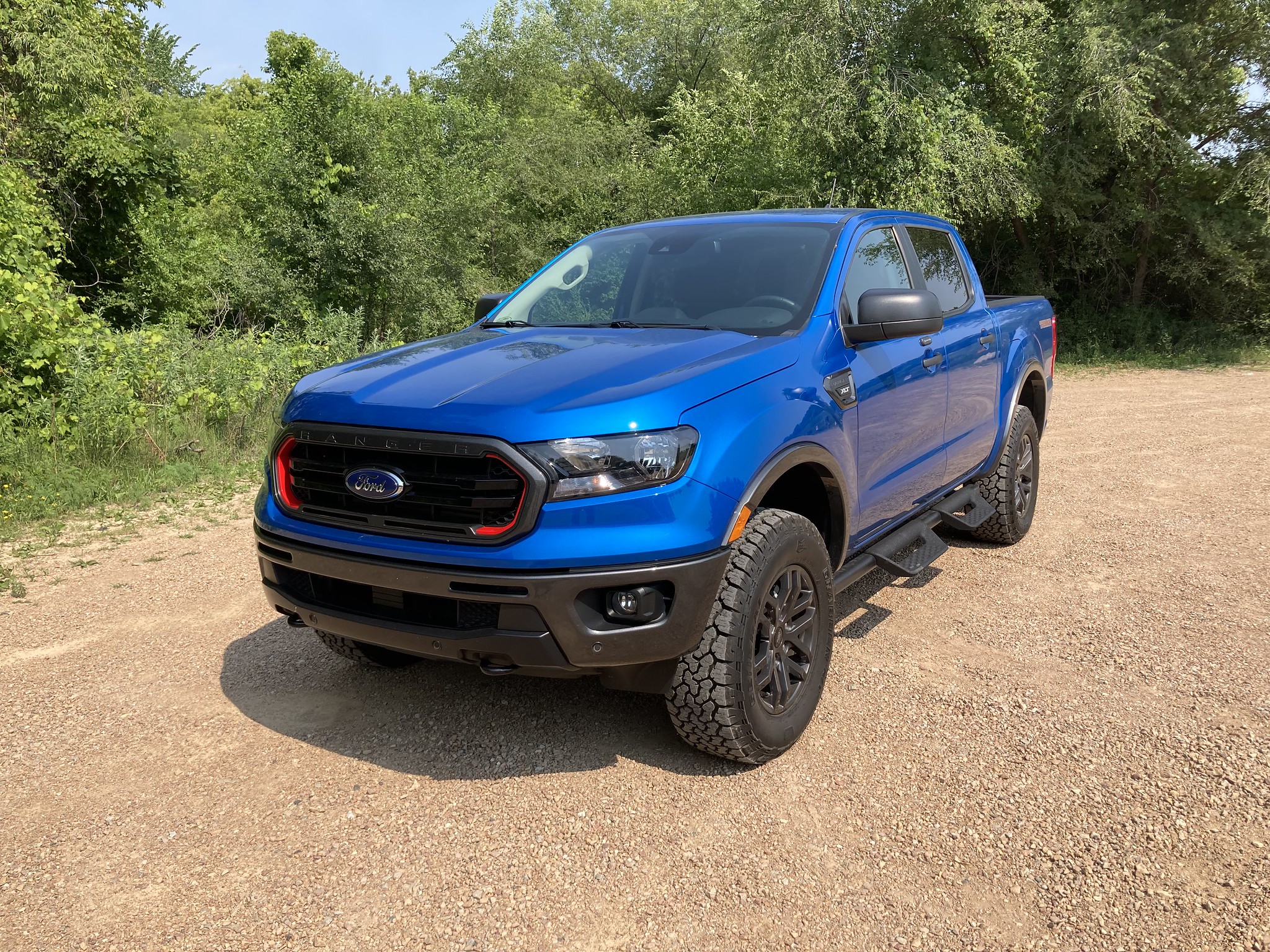 We must remind ourselves that a pickup truck was originally intended to be put to work. That is regardless of its size and whether it is built on a frame or in a unibody. For example, midsize pickup trucks were originally seen as the perfect size to do the job in more concentrated settings where parking spaces were at a premium.

Pickup trucks are the bread and butter of the America automotive industry. They come in a few sizes and are constructed in a couple of ways. They have put food on the table, built our homes, and delivered goods and services to your doorstep.

We must remind ourselves that a pickup truck was originally intended to be put to work. That is regardless of its size and whether it is built on a frame or in a unibody. For example, midsize pickup trucks were originally seen as the perfect size to do the job in more concentrated settings where parking spaces were at a premium.

However, the brands that sold midsize trucks saw that customers wanted to play with them rather than to put them to work. They wanted a smaller truck for off-roading or for other recreational activities.

Ford came in the game early, by importing the Mazda B-Series and renaming it the Courier in the early 1970s. The Courier did the job and got Ford into the game. It also enabled Mazda to start selling their version stateside – with a rotary engine.

As trade and tariff issues became less bearable to manage, Ford looked inward to develop their own domestically built compact pickup truck. The result was the Ford Ranger in 1982. It became a success story for Dearborn. The Ranger became among the top pickup trucks in its class until production ended in 2011.

They kept on building Rangers outside of this country for global markets. It would be current Ranger that caught the eye of Dearborn’s minders to plan its return to this market. They would do so knowing full well how their F-Series lineup of full-size and heavy-duty pickup trucks continue to dominate the landscape of this continent.

The newest Ranger was seen as a compliment to the F-Series. Granted, there will be some that will argue that it holds its own against its current rivals. Yet, it seemed we are slowly forgetting that the Ranger exists even with the announcement of the smaller Maverick unibody pickup truck.

My job is to remind you that the Ranger is an integral part of Ford’s truck lineup.

To do so, I brought in a SuperCrew version with the five-foot long box and four-wheel-drive in the XLT trim. That’s not all. It came with a new package designed to play as rough as the Toyota Tacoma TRD Pro, Chevrolet Colorado ZR2, GMC Canyon AT4, and Nissan Frontier PRO4-X…the Tremor.

A few months ago, I worked with a Ford F-250 Super Duty with the Tremor package. The idea is the same: It is not a separate model with a sole emphasis on off-road capability. It is a package loaded with off-road upgrades that you can add to most trim levels on the Ranger.

The result is the addition of an upgraded off-road suspension, specific alloy wheels, a set of hoop-like running boards, a skid plate, a modified heavy-duty off-road suspension, front, and rear tow hooks, and six new upfitter switches for auxiliary lighting and winches. Rangers with the Tremor package come with Trail Control and the Terrain Management System that enables specific settings for off-road conditions and specific traction needs.

On the Ranger, the Tremor package only comes in the SuperCrew configuration for both the XLT and Lariat trim levels. Either model will see additional red trim on the grille and all over the cab and box. You also have the choice to add graphics to your Ranger Tremor if you so wish.

Clearly, this is not a work truck. You can use it for work, if your job puts you in the deep woods or in the middle of the desert. However, I can bet that every customer of a Ranger equipped with this package is looking to use it for some form of playtime.

Believe me, this Ranger wants to play.

It all starts with the 270-horsepower 2.3-liter EcoBoost turbocharged engine. With 310 pound-feet of torque, this engine is very responsive on the highway, as well as away from it. This engine is connected to a 10-speed automatic transmission, sending power through a two-speed transfer case out to all four wheels.

The four-wheel drive system was very good towards sending traction down to various terrain conditions. You can select from a few modes on the Terrain Management System to enhance traction in specific settings. Or, you can turn the knob on the four-wheel drive controller to utilize the transfer case and system to your liking.

According to Ford, my tester can tow up to 7.500 pounds, while carrying 1,430 pounds of payload. Not bad figures.

In terms of fuel consumption, I averaged 21.1 MPG. Pretty decent for a mid-sized pickup truck.

The uprated suspension helped in smoothing out rougher conditions, as well as making highway driving a pleasant experience. It is a balanced ride that does not feel either soft or firm. Off the tarmac, Ranger Tremor’s suspension does a great job keeping things on an even keel.

The steering system is just fine for this vehicle. I did not expect tight turns and artificial road feel. This is an honest steering system that will point you where you have to be, with the right amount of effort. On-center feel is very good, which makes the Ranger very controllable overall.

As for the brakes, they’re not bad. Pedal feel is solid and responsive. I managed decent stops in normal tarmac, panic, and off-road situations.

Inside the Ranger, I found a simplified driving experience with its straightforward instrument cluster. This combined both analog and digital readouts for easy dissemination of information. The center console offered up a shifter for the automatic transmission with easy-to-use controls for the four-wheel drive system.

The eight-inch touchscreen is powered by Ford’s SYNC 3 system. You have six speakers emitting sound from this system from various sources, including a wired smartphone integration and the FordPass Wi-Fi connection.

There is seating up to five in the SuperCrew cab. The Tremor package adds to the XLT trim a combination vinyl and suede-like upholstery with additional stitching. The Tremor name is emblazoned on the seatbacks. The front seats are OK, though I wished for better lateral support. I do get more than enough headroom both front and back. Rear seat legroom weas fine, as well.

As for its looks, I covered some details based on the Tremor package above. If you ask me, this package adds a lot to the Ranger’s overall look. This truck looks like that someone made several aftermarket upgrades, but with factory parts and Ford’s own accessory line. That’s not a bad thing, really! In all honesty, this is one badassed Ranger – and I like it!

How much do you think this 2021 Ford Ranger would cost? This tester came with a sticker price of $44,430. Over $5,000 of that price is related to the Tremor package, including the graphics. The Ranger lineup starts at $25,070 for an XL with the SuperCab and just two-wheel drive.

One thing we need to keep in mind about the truck market is how these “smaller” mid-size pickup trucks are being marketed. You can get one for work in a lower trim level with a higher payload rating. However, the vast majority of mid-size truck owners want one to have fun in. They want to go off-road or other places that foster a customer’s active lifestyle.

Now, Ford offers a Ranger for every type of customer. The Tremor package brings off-road enthusiasts into their fold. Better still, you can get this package in two trim levels, rather than a standalone model. This flexibility helps customers get the truck they want at the price point they rather shop in.

When you are ready to play rough out at your nearby off-road vehicle park, try the Ford Ranger with the Tremor package. It could set off just a little earthquake to cause just enough of a ruckus among your off-roading buddies.