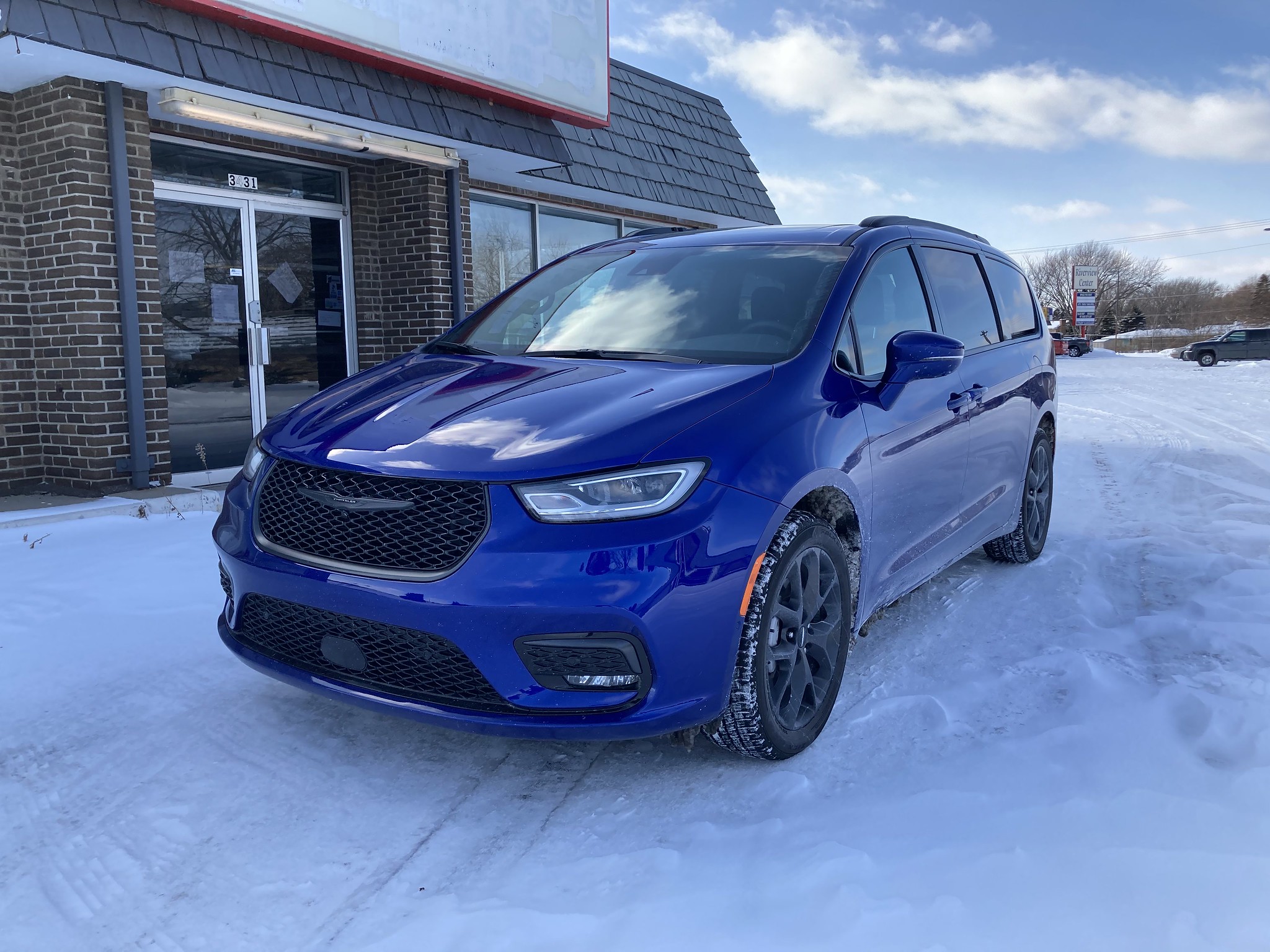 A year ago, Chrysler showed off this revised 2021 Pacifica to the world at the Chicago Auto Show. Little did I know that it was happening at all. I did not pay attention to my social media while on the plane heading to Chicago early that morning. I believe it was as I was on Chicago Transit Authority’s Orange Line “L” from Midway Airport that I discovered that this minivan took the stage first at McCormick Place.

The chorus of Aerosmith’s massive hit “I Don’t Want to Miss a Thing” has resonance. It is not just from Steven Tyler belting it out for all of to hear. There is a meaning that I take close to the heart.

A year ago, Chrysler showed off this revised 2021 Pacifica to the world at the Chicago Auto Show. Little did I know that it was happening at all. I did not pay attention to my social media while on the plane heading to Chicago early that morning. I believe it was as I was on Chicago Transit Authority’s Orange Line “L” from Midway Airport that I discovered that this minivan took the stage first at McCormick Place.

My excitement was elevated as I hustled down from the "L" to the Metra Electric Line station. By the time the conductor checked my ticket on the train to McCormick Place, I knew I was going to miss the press conference. Still, my goal was to get into the building, drop my backpack, and head down to the show floor to catch the presser's aftermath.

As I made it to the Chrysler booth, there it was. A minivan with a revised front clip, rear taillights, an ultra-luxurious trim level, and the return of all-wheel-drive.

That’s the 2021 Chrysler Pacifica in a nutshell…

It is one thing to catch it at an auto show – just like in the "before times." To have it sitting in my parking spot behind the house is another.

In other words, I had to get to know the Chrysler Pacifica better. In a way, it is a vehicle that I had plenty of different experiences with. I point to a certain 2019 Pacifica Hybrid as a vehicle that helped the healing process from a low point in my health. Now, this 2021 Limited tester with all-wheel-drive and a twist to the plot with the finalization of the merger now known as Stellantis.

Some other manufacturers tour their family-friendly offerings “storytelling vehicles.” The Chrysler Pacifica has plenty of stories to tell.

The first tale starts right up front. The new clip is a throwback of sorts. If you recall the Chrysler Town & Country from about twenty years ago, then you recall the big grille with the winged badge right in the middle. It was a classic look that has returned for 2021. The shape is a bit different, but it still has that classic style. New narrower headlamp units grace the flanks of the front clip. At the rear, there is a new taillamp cluster that runs across the liftgate.

The tester I had was the Limited with the S Appearance Package in this beautiful Ocean Blue Metallic paint job. The color is what makes this tester very special, as it pops with the overall design and all of the details of the Pacifica. Selecting the S Appearance Package blacks out the grille, all of the badges, and adds a set of 20-inch alloy wheels.

In all, this is no longer the minivan of your youth. It is for the family that wants a cool factor in their family transportation.

Step inside for more of the S Appearance Package. The leather seats wear the "S" badge on the seatbacks of the first row, along with contrast stitching and piping on all three rows. The seats themselves were on the firm side, with just enough bolstering to keep in them. The second-row captain’s chairs also were firm, but with another set of adjustments for true adult space. You can seat three others in the third row, with easy access from the middle of the Pacifica.

For maximum utility, this Pacifica tester had the Stow'n Go seats, where both the second and third rows fold right into the floor for a flat loading area. All told, you have 140.5 cubic feet of the next home project or to move yourself across town. The third row is raised and lowered with a set of buttons from the back of the Pacifica, whereas you have a strap to work the second-row captain’s chairs onto the floor. With the seats up, you have extra storage space to hide items from prying eyes.

The driver has a great view with a lower cowl from the instrument panel. Instrumentation is simple with an excellent TFT information screen in-between the two dials. The center console offers more storage for purses and grocery bags underneath the panel containing more cubbies and two big cupholders. The center stack houses the Rotary E-Shifter and climate controls. There is also another climate control setup above the passenger side rear door for second- and third-row occupants.

Above all of that is one of the big news items on the Pacifica – Uconnect 5. Already one of the best infotainment systems in the business, Uconnect 5 is now more customizable with a widget-based design, more presets, and more connectivity than ever. You now have wireless smartphone integration and device charging, along with using Alexa from your Pacifica.

Second row occupants also get more from UConnect Theater, with pre-loaded games and device connection from each of the two folding 10.1-inch screens off of the front seatbacks. HarmonKardon provided 13 speakers of excellent sound across the entire cabin.

For families who would rather not whip their back to tell their children to behave, you now have FamCAM. This enables multiple cameras to check on the second- and third-row occupants from the front UConnect 5 screen.

The last two Pacificas I worked with had the plug-in Hybrid driveline. Chrysler still offers this for 2021. However, my Limited tester is powered by the “normal” 287-horsepower 3.6-liter Pentastar V6, with a nine-speed automatic transmission, and the new all-wheel-drive system.

New? Well, for the Pacifica. Once upon a time, you were able to get your Chrysler Town & Country with an all-wheel-drive system. That was up until 2004. The new system works with a Power Transfer Unit switching between front- and all-wheel drive using a three-piece drive shaft between the two axles. The system is enabled automatically to provide traction and steering assist when it is needed at any speed. If AWD is no longer needed, the Power Transfer Unit is disconnected for front-wheel-drive only.

The Pacifica delivered on giving me a smooth ride. The suspension absorbed road imperfections that would be beyond acceptable for six more passengers. It also handled well. Cornering and evasive maneuvers could yield some roll, but it is much more controlled than before. The Pacifica does corner near-flat at a lower limit. There is a confidence in this minivan that is welcomed even with iced, caked, and snowy conditions.

The steering system offered tighter than usual turning radius. However, I felt that the steering wheel had a soft and light feeling on-center. In all, this system was responsive at the wheels. Meanwhile, the braking system offered good stopping power in normal, panic, and winter situations. The pedal feel was solid, as was the response down to the calipers and rotors.

My tester in the Limited trim, standard all-wheel-drive, and the super cool S Appearance Package came with a sticker price of $55,265. There are four trim levels available on the 2021 Pacifica – each with a choice between the Pentastar V6 or the plug-in Hybrid driveline. Pricing for the Pacifica starts at $35,045.

If you’re looking for a better value at a lower price point, Chrysler offers the Voyager. This is a continuation of last year’s Pacifica look with lower equipment content. On the opposite side of the minivan lineup is Chrysler's most luxurious trim level ever, the new Pinnacle model. You get an elevated interior with throw pillows and better leather trim.

No matter which Chrysler minivan you choose, you are still driving one of the best vehicles in its class right now. Yes, there is an all-new Toyota Sienna out there, the Honda Odyssey just had an update this year, and Kia is about to announce how it will replace the current Sedona. Still, Stellantis wants us to know that their minivan is still relevant in the marketplace.

The story of Chrysler’s minivan continues to yield multiple tales of family road trips and socially-distanced tailgates. It is also a tale that continues to tell itself of what it can still do and how it satisfies its owners and occupants. To me, that is what this Chrysler Pacifica is all about. You wouldn’t want to miss a thing in one.

If I did not go to last year's Chicago Auto Show, I would have missed it completely. It would be one less story to tell. Rather, one less story a Chrysler Pacifica would tell for me.