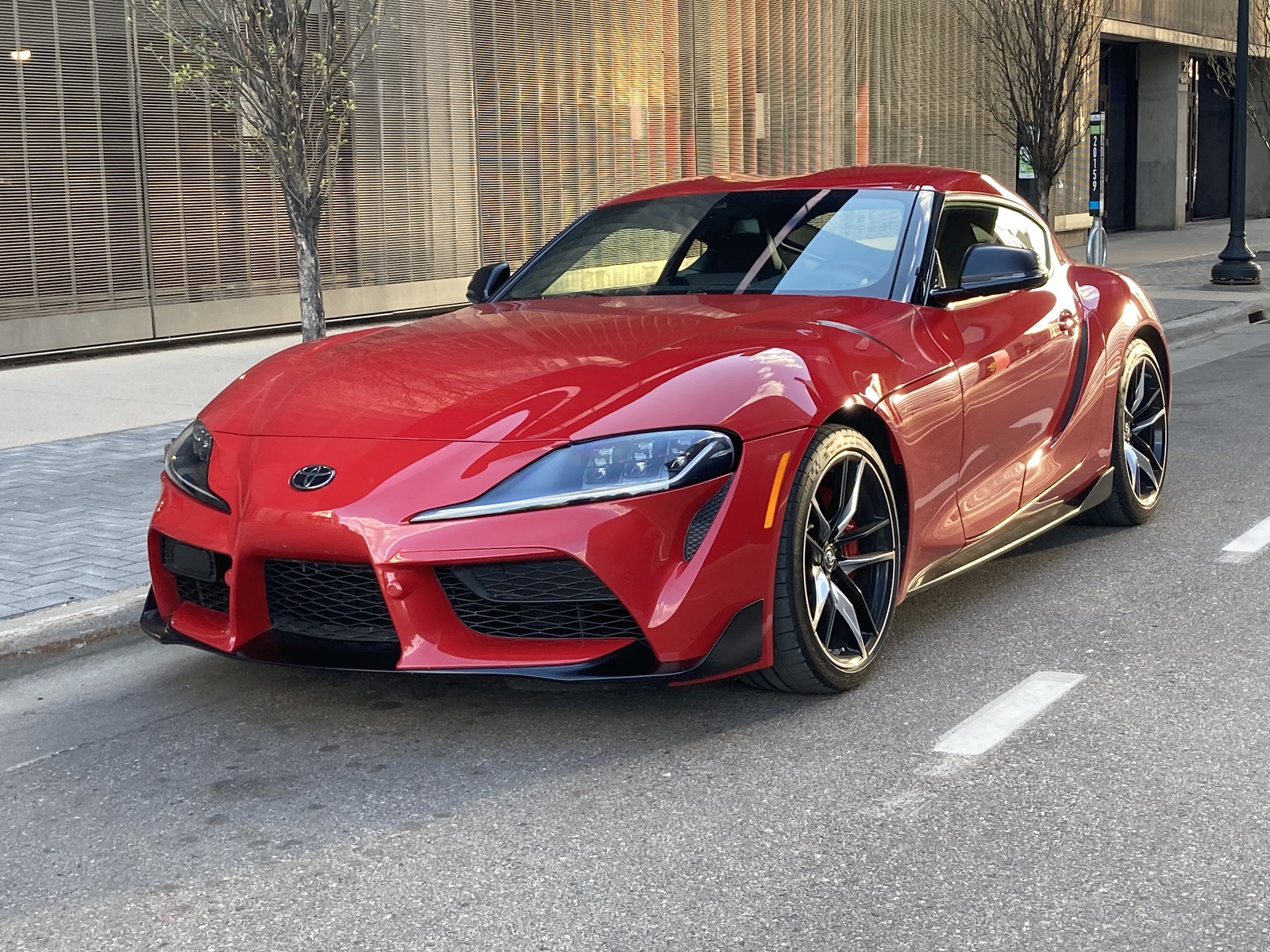 One question I could ask is "why?" It is plainly obvious what that answer would be. Because you watched enough of Vin Diesel and the late Paul Walker to understand why the A80 Supra became an icon. A few of you own one right now, perhaps for the reason that you saw it on screen and thought "I want that."

Every year, a vehicle would show up at my doorstep that would send everyone into a tizzy.

This year, that distinction goes to the 2020 Toyota GR Supra.

One question I could ask is "why?" It is plainly obvious what that answer would be. Because you watched enough of Vin Diesel and the late Paul Walker to understand why the A80 Supra became an icon. A few of you own one right now, perhaps for the reason that you saw it on screen and thought "I want that."

Which brings us to today's GR Supra. Before I dive into my exact thoughts on it, let me break down a few things here.

What does the GR part of the name stand for? It stands for Gazoo Racing. This is Toyota's global motorsports efforts that stretch from FIA’s World Endurance Championship to the World Rally Championship. Think of the GR nomenclature as Toyota’s equivalent to Nissan's NISMO, BMW's M division, Mercedes-Benz's AMG…and so forth.

Speaking of BMW, the GR Supra is one of many outputs that came from an agreement between the Munich company and Toyota. The car was co-developed onto a single platform that would not only spawn the new GR Supra. This platform would also underpin the new BMW Z4 roadster. Both the Toyota and BMW are being produced at Magna's plant in Graz, Austria.

There is something else I have to explain here. Toyota will tell you that, yes, the GR Supra was co-developed with their Bavarian partners. If you mention anything about the GR Supra with anyone at BMW, they will walk away.

To be honest, this was not my first time driving the GR Supra. Last October, I put one on at Autobahn Country Club near Joliet, Illinois for the 2019 Midwest Automotive Media Association Fall Rally. Just one lap to see if this new sports car was the real deal. Several months later, another one arrived for a full term of evaluation, and to see whether this new sports car is worth all of the hype it continues to garner.

Before BMW became part of the development of the GR Supra, there was a concept Toyota floated around the auto show circuit called the FT-1. As soon as it appeared online and in the buff books, the rumor mill was swirling that this advanced looking coupe would become the new Supra. We were teased with FT-1 inspired test mules that whetted our appetite. Just last year, concept became reality. It has split opinion on whether this could be a true Supra for the fans or a tarted up BMW for so-called real enthusiasts.

This 3.0 Premium example in Renaissance Red was indeed the real deal. One that would surprise the "Fast and Furious" fanboys and Roundel elitists alike.

You can see plenty of the FT-1's design elements on the production GR Supra. The front end created a character look that defines this new generation sports car. Also defining this look are the headlamp units, comprising of six LED bulbs each, plus an LED daytime running lights/turn signals.

From there, you have a long-ish clamshell hood, leading to a short roofline sculpted with two humps over each seat. The latter detail reminds me of the roof effect created for the last Dodge SRT Viper.

The fastback rear end forms a hatchback opening that sees an added integrated rear spoiler. The A80 influence is seen in the taillights, which are framed by an aggressive rear bumper. The finishing touch is an equally aggressive diffuser housing a single race car-like reversing lamp and two large chromed exhaust tips.

There are a few annoying things about the GR Supra’s design. If you scout around the car, you will find plenty of plastic pieces posing as non-function aerodynamic vents. Wouldn’t be cool if they actually serve as airflow devices to cool down the brakes and add more intake into the engine bay? Not that it needs it…but, hey, I’m just nitpicking.

The GR Supra is a low car. Tall people – myself, included – will have to duck inside gracefully. The doors are long but can be positioned not to fly wide and ding up the vehicle next to it.

Once inside the GR Supra, you will notice a few things that may spark some inquiries. One of which is the lack of a rear seat, a feature found on all previous Supra models. Toyota and BMW agreed that both of their co-developed Austrian-made vehicles will only seat two occupants.

Seating is supportive with deep bolsters for the cushion and seatback. Power adjustments are available for rake, recline, height, and lumbar support. I found a seating position that I can take advantage of the roof humps.

Speaking of BMW, if you had the pleasure (or, well…nevermind) of owning or driving one, then you can easily pick out the interior pieces that have come from previous generation Bavarian metal. Having driven (on occasion) my roommate’s E90 3-Series and two last-gen X3s, then I can work out that Supra Connect controller looks and (almost) functions like iDrive. And, that the bank of audio controls the infotainment interface, the steering wheel, and other switches and functions are from those three BMWs she used to have.

Not that it is bad a thing…

One thing that is cool about the GR Supra’s cabin is the digital instrument cluster. The readouts are clean, but I noticed a blank space to the right of the tachometer dial. That is where some of the warnings will pop up. Maybe I have not been explorative on this screen, but some of the readouts from the infotainment screen and the odometer/tripometer/fuel range/etc. would be better served in the larger blank screen in front of the driver.

Speaking of the infotainment system, Toyota decided to call this watered down version of BMW's iDrive "Supra Connect." The main dial on the center control drives most of the screens, along with buttons on the console and on the steering wheel. I do like the fact that the audio system is connected to a bank of JBL speakers and that the GR Supra is the first vehicle I have ever experienced wireless smartphone connectivity, I can just chuck the USB-to-Lightning cord away and let Apple CarPlay take over with just a wireless connection.

There is a drawback, however. I felt that the infotainment screen should be more canted towards the driver and brighter to see. Again, I’m nitpicking.

The hatchback opens up high to a 10.2 cubic feet of cargo space. There is no real pass-through towards the seats. However, the space is deep and pretty accommodating.

Underneath the clamshell hood is a paean to Supras past – courtesy of BMW. A Supra was never equipped with a V6 – always an in-line six-cylinder engine. BMW dropped their 3.0-liter in-line six with a turbocharger, good for 335 horsepower and 365 pound-feet of torque. This engine is pretty damn good. I love the performance band when it responds to the throttle. It is quick, forceful, and strong.

This engine is connected to an eight-speed automatic transmission that sends power to the rear wheels. The shifts are smooth, and I love how you can hear them through the chromed exhaust tips. If I wanted some crackle with my pop, I push down on the Sport button in the center console. The result is something for the younger set. Even the young at heart will enjoy the complete performance package one can experience in Sport mode.

One thing I was surprised by was the fuel economy. When it was all said and done, I observed an average of 27.3 MPG. That’s quite impressive compared to other sports cars I have driven.

To be honest, I have never driven any of the four generations of the (Celica) Supra. I can imagine that the driving experience would range from boulevard cruiser to "Fast and Furious." If you are an aficionado of the Supra, you might want to change the way you approach this car.

Think of this GR Supra as a sports car. An engaging car that can be absolute treat to drive. Take it through the twisties. I found it wanting to dive into corners and square them up. The cornering is superb and can take you to the limit without scaring you to death.

I would give a lot of credit to the steering system. Its sharp reflexes make for exacting turns. On-center feel is fine in Normal mode, but I would suggest putting into Sport for a heavier feel with more control at the wheel. There is some electric play at the wheel, when trying to straighten out the wheels or to make U-turns. The turning radius is pretty good.

The braking system is equally fantastic. Pedal feel is great with superb response down to the wheels. Brembo provided four-piston stopping power through its red calipers, touching on 13.7- and 13.6-inch rotors front and back respectively.  The result is superb stopping power in normal and panic situations.

As for ride quality, I found it rather balanced when in Normal mode. Yes, you will feel some crappy roads and the suspension system will do its best to absorb them. There is some firmness overall, however. But, once you hit some smooth tarmac, you will notice how comfortable the GR Supra actually is.

Then, you want to put it into Sport mode. That is when the dampers are firmed up. The result is the absence of roll and lean. It is exactly what you expect from a sports car, even with the Supra name applied to it.

I use the term "sports car" a lot because of how the GR Supra truly feels. Among sports cars, it is priced as a relative value. The 2020 Toyota GR Supra is offered in three trim levels, including a limited-run Launch Edition. The base price for the GR Supra 3.0 is $49,990. My 3.0 Premium tester was priced out at $56,195.

This is what this newest iteration of the (GR) Supra really is – a true sports car. It fits the mold, where a simple interpretation is seen as photocopying an archetype. Where it takes flight is not just in execution, but in overall design. If you want to continue the same formula as the previous four generations of Supras, then you cannot create a revolutionary model like this one.

You might even say that this GR Supra is a spiritual cousin to the 1967-1970 Toyota 2000GT. That was Toyota’s idea of what a sports car in the late 1960s was. Come to think of it, this is perhaps the embodiment of what Toyota wanted all along for this new car.

To accomplish this, Toyota and BMW pooled their resources to create the GR Supra. And, it works. It has been snapping necks of onlookers, drive-by enthusiasts, and anyone else who gives two darns about cars. For me, it is all about how this GR Supra engages the driver towards making the drive in one a special event.

The ultimate result is a sports car for right now. An instant classic that creates a new legacy for the Supra name.

You can now forget everything you know about that Supra you saw on the big screen.