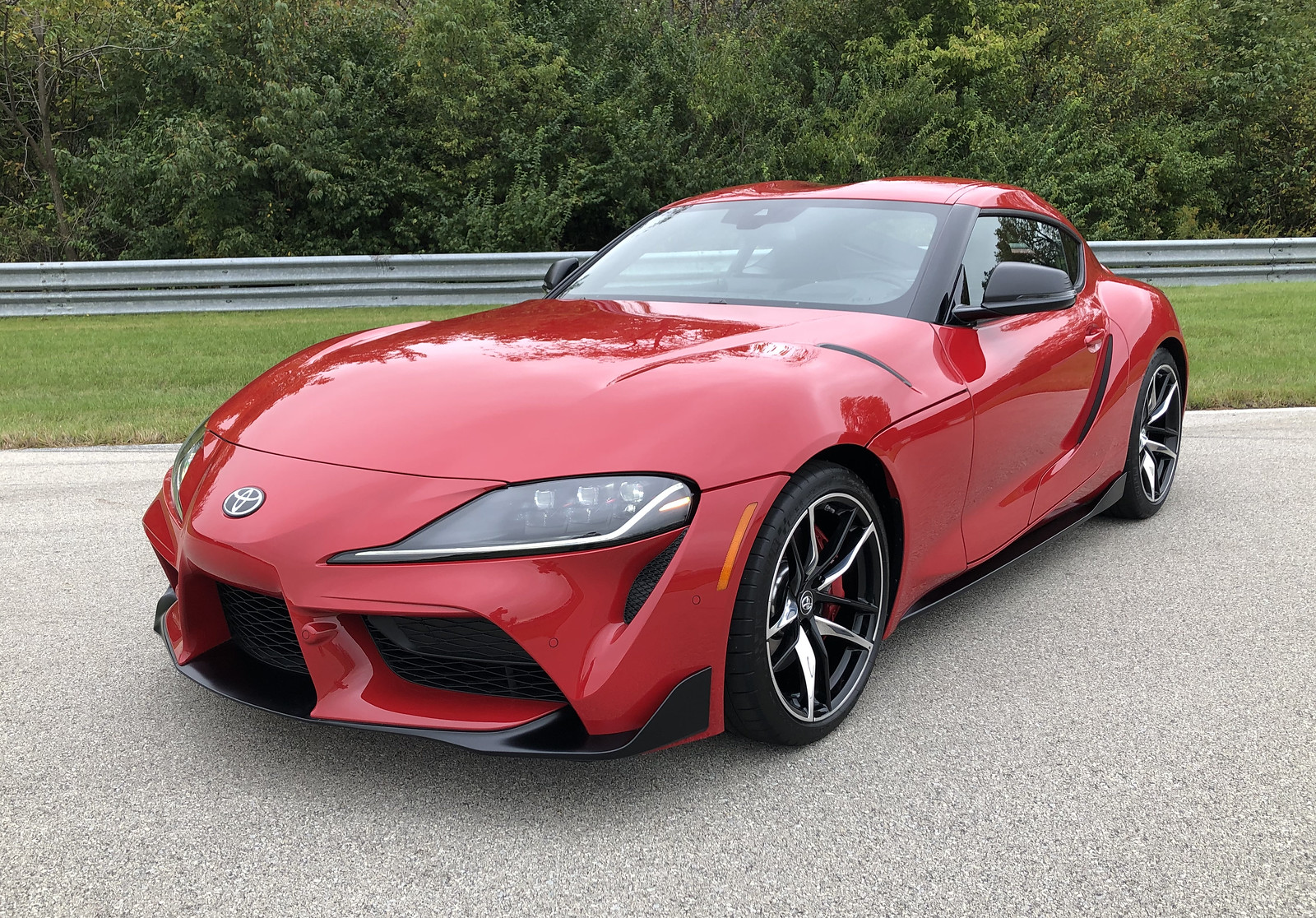 As I said in a previous article, my colleagues made it clear that my attendance at the 2019 Midwest Automotive Media Association Fall Rally will be more than welcomed. That's all and great, but was all the effort I put into attending this year’s event at the Autobahn Country Club near Joliet, Illinois worth my commitment to fulfill?

As I said in a previous article, my colleagues made it clear that my attendance at the 2019 Midwest Automotive Media Association Fall Rally will be more than welcomed.

That's all and great, but was all the effort I put into attending this year’s event at the Autobahn Country Club near Joliet, Illinois worth my commitment to fulfill?

It began with seeing some of my colleagues and contacts, who have become a sort of a family to me. Not to name names, but they do include some of the best bylines in the automotive media business that are based in the Midwest. I have said many times how much I am grateful to have the friendship and connectivity with these professionals in the media and in the business.

With that said, it became "game on."

As with most MAMA Fall Rally events, it usually starts with a dinner for the out-of-town guests at a restaurant inside the Harrah’s Casino and Hotel in Joliet. Let me not bore you with that part of the Rally. Nor shall I tell you how I slept at said hotel.

Jumping ahead to Wednesday morning. A couple of check-ins at Autobahn introduced me to a new configuration for our usual space. A new entrance for the main gathering spot inside of a wet morning was indeed welcomed. Autobahn did some renovations to their clubhouse thanks to a reconfiguration of the lounge and club room.

Toyota served us breakfast with a large helping of their 2020 GR Supra. It was a great way to kick off the Rally with more questions – from an enthusiast perspective – for this important collaboration with BMW. This Austrian A90 was simply the star of the Rally.

Of course, I had to drive it. And, find out whether I can fit and get in and out of it. More later on my impressions of the A90 GR Supra.

In the eyes of the media association, I am considered a "novice" when it comes to track work. I believe they measure it due to my lack of participation on the track and my ability to despise "lead-follow" driving. Yes, it is supposed to teach you car control in traffic, but I find it uninspiring – even at 70 MPH.

But, I was obligated to get on with the novice group. My instructor happened to be a colleague of mine from MAMA. He took the passenger seat of the 2019 Volkswagen Golf GTI I took onto the North Circuit for my set of novice laps. Instead of telling me what I was doing wrong, he actually praised me for doing most everything right. A boost in confidence? Maybe…

I switched from the track to the off-road course, located in the middle of the North Circuit. This year, they had only one course – a combination of the technical section inside the woods and parts of the two-track fast track. The selection of vehicles was selected because they can do this combined course- including three mid-sized pickup trucks.

Lo and behold, a familiar truck was there: The 2019 Chevrolet Colorado ZR2 Bison I reviewed back in August. I selected this truck because I wanted to close the loop on finding out its off-road prowess that I never really got a chance to do.  Knowing that there will be tight maneuvers in the technical part of the course, I had to be extra careful with the Colorado to make sure I do not scratch or damage this truck. Sure enough, the Colorado gave me a lot of confidence to do the technical course with its diesel power and superb four-wheel-drive system.

What made things even more fun was the wet conditions on the track and around Autobahn made things pretty muddy inside the off-road course. I responded accordingly. The Colorado did exactly what I hoped it would do – bite down onto the muddy surface without any loss of traction. This confirmed everything I liked about the Colorado ZR2 Bison.

Granted, I could have taken a second run through the course in either a Jeep Gladiator Rubicon, a Toyota Tacoma TRD Pro, a Jeep Renegade Trailhawk, or a Kia Telluride. But, I wanted to talk to a few people and drive some vehicles out on the street. Plus, I needed to fulfill my curiosity about the GR Supra.

The next vehicle I checked out was the Dodge Durango Pursuit. While the Ford Interceptor Utility (i.e. the Explorer) is the sales leader among public safety vehicles, Dodge wanted to double down on the success of its Charger Pursuit by ensuring that its SUV was ready for duty with its 5.7-liter HEMI V8, eight-speed automatic, and all-wheel-drive system.

When working with a public safety vehicle, one must be cognizant that if they touch the controls for the lights and siren on the roads outside of the venue’s gate, it is considered unlawful to "impersonate" an officer of the law. Like most of my colleagues, I went to "I want to be a police officer when I grow up" mode and played with the lights and siren. This vehicle brings out the pre-teen in all of us.

Next up was the Chevrolet Blazer, which we already questioned the reasoning behind naming a two-row mid-size crossover with an iconic off-roader from our past. The truth is that the Blazer is an OK vehicle. It’s not bad, not is it exceptional. I found a few things that I was put off about, from its ergonomic design to some styling points. The Premier I drove had the 3.6-liter V6, which was pulling quite a bulky vehicle. I’m glad I got that out of the way.

This segued into lunch, which was hosted by Honda. Honda’s big news was the addition of a Hybrid driveline to its popular CR-V crossover. For 2020, the compact SUV is getting a few revisions, along with the addition of the new driveline. I would be interested whether the Hybrid does make the difference for the CR-V.

My main focus after lunch was to drive the A90 GR Supra. Prior to lunch, I talked with my contacts at Toyota, along with the product specialist for the Supra. It was determined that my torso was too long, but I would fit just fine. One of the tricks to accomplish better headroom was a couple of "domes" on the roof – something I originally saw on the last Dodge SRT Viper. This Supra is a two-seater only, which made for an interesting conversation.

I am happy to report that I can fit inside the Supra and the seats were sufficient for me. I felt no fatigue or pain behind the wheel – something I have been concerned about since my stones from May. Getting in and out would require some gymnastics and limbo skills. Once I did my best not to embarrass myself in the ingress and egress of the Supra, I planned to return after lunch to drive one.

Then, it happened. After lunch, I jumped into a GR Supra 3.0 Premium and inched it towards the track. I was nervous because I had the chance to hear it. It sounded epic. Driving it onto the paddock gave a review of a car that fused the best of Toyota and BMW into a concentrated coupe.

I will admit being nervous about being competent in the GR Supra. The hype about the car was on high from fellow journalists and enthusiasts alike. But, I wanted to make sure I do this for you. Besides, I have already been peppered about when I will have one available for review back home.

Once onto the track, I completely understood what the Supra was all about. It was not meant for the track as the primary purpose of this vehicle. But, we had no choice but to take it onto the North Circuit. Once there, my "victories" on the novice laps would soon become losses. My lead-follow skills diminished at the force of the turbocharged 3.0-liter in-line six underneath the Supra’s hood I was too worried about keeping up not to drive on its own merits.

But, the Supra is a damn good car. Better than an RC F? That would be an unfair comparison to make. Still, the GR Supra would be better served on the roads along the bluffs of the Mississippi River. I feel that there is where I will understand the GR Supra’s level of driving superiority.

Sadly, the vehicles I mentioned here were the only ones I drove at the MAMA Fall Rally.

I would love to tell you why. There are too many things to parse out here and, frankly, there were some things that came up at this year’s Rally I would rather not talk about at length on here in this publication.

There is a happy ending. My vehicle schedule included taking a 2020 Hyundai Palisade Limited AWD home from the Rally. Except, they needed my vehicle for a post-Rally photoshoot session. Luckily, I was able to take some shots of the other vehicles lined up on the straight on the North Circuit.

One thing to note about Autobahn is the opening of their karting track. There is no membership required to use the track and it has its own access away from the Country Club. Sadly, I was unable to check it out, due to a tight schedule of my checking into a hotel for my final night away from home in Rock Island, Illinois.

Through the rain on Interstate 80 west of Joliet, I made it into Rock Island. The images and experiences of another MAMA Fall Rally behind me.  But, this adventure is far from over. The Rally and the experience with the 2020 Toyota GR Supra still in the rearview mirror.

DISCLAIMER: Vehicles provided by their respective manufacturers. Thanks to the Midwest Automotive Media Association and their sponsors for their hospitality and another Fall Rally in the books!