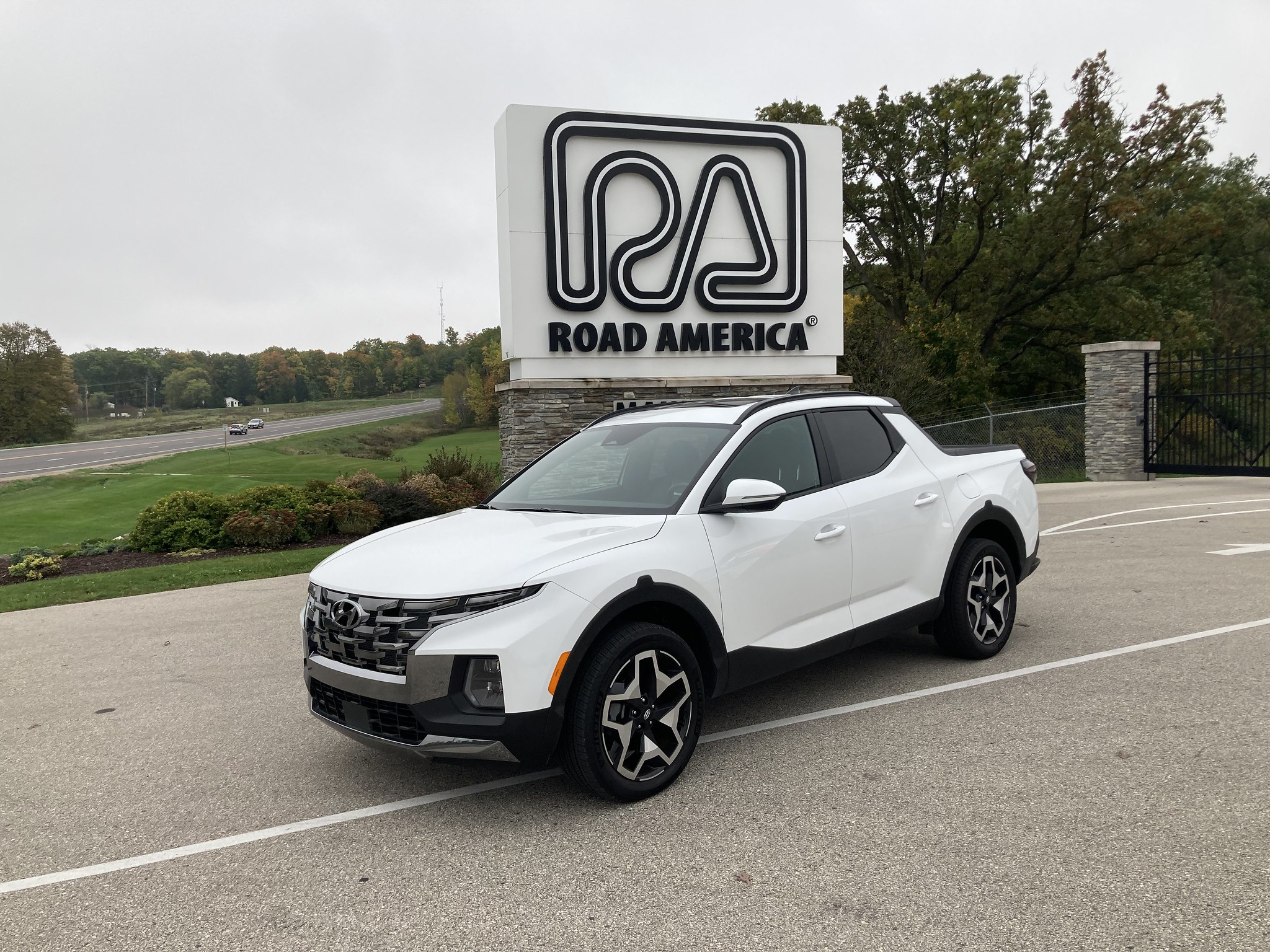 I missed the last time MAMA reconvened at “America’s National Park of Speed.”

After a couple of years of rescheduling and working out how to do it through a healthcare crisis, the Midwest Automotive Media Association returned to Elkhart Lake, Road America, and the Osthoff Resort. They did so by celebrating the media association’s 30th anniversary.

I missed the last time MAMA reconvened at “America’s National Park of Speed.” Having felt ill that spring and missing altogether, the 2019 Spring Rally turned out so well that it was the media associations mission to get back to Road America as soon as they can.

The 2021 Rally took on the same format as previous Spring Rallies, albeit under cloudy cooler skies and the slow turning of the foliage to fall colors. Having a rally at Road America in October instead of May might seem weird, but not when other media associations across North America usually schedule their biggest event of the year around this time.

The schedule is the usual fare. A welcoming fish fry at the Lake Street Cafe in the center of Elkhart Lake, the first full day of track and street drives, leading to a second half-day of off-roading and award evaluation for MAMA’s two annual awards. The same folks from the organization showed up, along with some new faces and others missing due to scheduling conflicts and concerns over travel due to the continuing pandemic.

While some things remained the same, there were a few things that hit differently. Maybe because of the mask-wearing requests, the plexiglass covers at the hotel, and some missing manufacturers and sponsors.

Still, practically everyone was there to get some wheel time with vehicles they normally do not see on a regular basis. They also came to see if anything new was there to experience before they start circulating among our media corps.

We were not entirely disappointed. In a sense, I was fine with what we had on offer for our driving experiences.

The first vehicle I found myself behind the wheel of is the elusive 2021 Mercedes-Benz S-Class. Using the word “elusive” will be a theme when discussing these vehicles due to the challenges the industry is dealing with thanks to the fall out of this pandemic upon the global supply chain.

The S 580 4MATIC example available to us was probably the right vehicle representing the three-pointed star brand. Any of the Maybachs would be well over the top for this occasion. Yet, the S-Class is still a technological marvel of over-engineering.

No matter the price or size class, any vehicle should not have to be too complicated to operate. I found a lot puzzlement in my time behind the wheel of the S 580. Granted, it had a lot of gee-wiz stuff, including the three-dimensional effect on the instrument cluster. Still trying to do at least one thing to adjust something in this vehicle does require knowledge of its innerworkings that is well above my pay grade.

Not that it’s a bad vehicle. Quite the opposite. It is as advertised – a feat of engineering over-excellence that you could only drive with ease. That is once you figured out how to work almost everything on the Mercedes-Benz S-Class.

The next vehicle I drove was less complicated. The arrival of the Wagoneer and Grand Wagoneer to the Stellantis MOPAR lineup was not only a return of the luxury large SUV, but something to be put in the same conversation as the Cadillac Escalade and the Lincoln Navigator.

It is large and definitely in charge. The 471-horsepower 6.4-liter HEMI V8 motivates this 6,400-pound mass appropriately. The Grand Wagoneer I drove offered everything to everyone with high quality touches and stylish appointments. Its capabilities are class benchmarks, which help its cause tremendously.

Could this be the Imperial for the 21st Century? That was one of the side thoughts I had during my first encounter with this huge SUV.

At that point, I began to look at more humbler rides to check out. Luckily, the new 2022 Ford Maverick was available for us to experience. I drove a Lariat model with the new hybrid 2.5-liter four-cylinder driveline. This engine was connected to a continuously variable transmission driving only the front wheels.

The driving experience was decent. You wished for more horsepower and capacity, but you have to comprehend that the Maverick was not made for heavy work. It is made for urban hauling or for fun. However, it looks like something you can utilize for local delivery, commuting, and other light duties.

There are plenty of cues from the Bronco Sport. The dashboard looked familiar. Come to think of it, it shares the same platform as the smaller bucking horse. It even comes from the same plant in Mexico.

Given my recent experience with the Honda Ridgeline and Hyundai Santa Fe, there argument over whether the Maverick is truly a pickup truck of not comes down to its usefulness. There are no gimmicks, such as an in-bed trunk. Ford also made sure to tie the Maverick to the rest of its pickup truck lineup.

Speaking of trucks, I finally got my turn in the new 2022 Nissan Frontier. My eyes were glued on this vehicle because it was not only a part of the Nissan Next revamp program. It is because Nissan needed to get a new mid-size pickup truck on the market sooner than later.

In all, I was not disappointed. It has a powerful 310-horsepower 3.8-liter V6 connected to a nine-speed automatic. This driveline was introduced in last year’s Frontier. Everything else was elevated and thoroughly updated for a new customer. This is truly the newest entry in its class.

You would have expected that I would drive the PRO-4X model with its off-road capability. You would be wrong. I drove the PRO-X, which is a rear-drive only model. Sure, it looks like the PRO-4X, but it lacks its ground clearance and extra axle.

Nonetheless, I enjoyed this Frontier PRO-X. The Bilstein shocks made a huge difference in terms of ride quality and suspension management. It should be a nice pre-runner pickup truck in this trim level. However, I believe that the Frontier is a fantastic mid-size pickup truck overall.

I went back into the world of luxury briefly in the new 2022 Infiniti QX60. It’s been a long minute since the last time drove one of Nissan’s luxury offerings. I will say that it went beyond my expectations, since Infiniti had been struggling to get the love it needed of late. Frankly, they have been the one brand that never got all of the love it deserved since day one.

What I experienced was an elevated vehicle. The lack of visual parts sharing with Nissan is a welcomed change. Everything is nicer to the touch, even the haptic touch on the infotainment system. The quilted leather is divine.

What I am getting at is how Infiniti has pushed the QX60 into a territory that is exactly where luxury SUV consumers can attain one. The styling may be a bit squared off, but it has to be. The details override the shape through intent.

With a powerful V6 and a nine-speed automatic, luxury SUV customers will be surprised by how the Infiniti QX60 will delight its guests. I certainly was delighted. It’s been too long, Infiniti…

From the first day of driving, I transitioned into another day of street drives around the neighborhood for MAMA’s two awards. I ended up checking out the 2022 Mazda MX-30. The odd-looking electrified Mazda was an interesting vehicle indeed. It drove nicely, but I was a bit cramped, the seats were uncomfortable, and the experience was a hodgepodge of interesting materials, mixed with controls from other Mazda vehicles, and a very strange “suicide door” set-up.

Which brings me to the 2021 BMW M440i Gran Coupe xDrive. It is exactly what I expected in a BMW with the 382-horsepower B58 turbocharged in-line six-cylinder. With the inclusion of the 48-volt electrification system, this thing is still rapid. Quick and somewhat loud.

The best part was how I was able to find a very comfortable place behind the wheel. Normally, BMW Gran Coupes are usually cramped for me. Not this one. It would be a grand touring car that has the heart of something that offers no cares in the universe.

Think about it: A five-door hatchback sold in this country that are averse to them. One look at the Roundel up front is one reason why this would be a desirable machine. It also had a driving experience to match.

Then, you look at the strange looking kidney grilles. It is the most polarizing thing the Bavarians have done in their long history. If you look at a gift horse in the mouth, maybe the M440i xDrive Gran Coupe will win you over with its driving experience rather than its looks. After all, not everything – and everyone – is attractive to…um…ahem…anyway…

To wrap up at my time at this year’s MAMA Rally, I knew I had to do something I have never done before in previous rallies – go off-roading on Road America’s property. It is called “America’s National Park of Speed” because it offers multiple opportunities for enthusiasts, spectators, racers, and MAMA members to do one of many activities on site.

I got lucky. My first – and only – off-road experience was in a 2021 Jeep Wrangler four-door 4xe Sahara.

The track was muddy, full of tight turns, steep hills, ruts, rocks, and some run-off grass. I was nervous…even a bit scared.

However, I had a good instructor on the passenger seat in Scott Tallon, Director of Marketing at Jeep. He knew how to handle this crazy track in this electrified icon. I mention this fact, because he asked to put the Wrangler 4xe into a full electric mode throughout this course.

The result was my best moment at the MAMA 2021 Rally. The Wrangler 4xe did its thing without any input from the gasoline engine. Its electric motor and battery pack, along with its legendary off-road prowess – got me through all of this. In the end, Tallon complimented me on my ability to manage this tough course. I believe he used the word “outstanding” to describe my drive on the new off-road course.

So, we came back and did our thing. That’s all we ask for. For me, it was a great excuse to interrupt the routine. Connect with some good folks whom I met over these past ten years of Victory & Reseda. Also, to find inspiration for future subject matter and other ideas on where I see myself after this year.