The past year's models should have been liquidated from the lots, if a dealership was lucky to do so. Instead, a new shipment of vehicles would arrive. Then, the showroom gets spruced up with new signage announcing the new model year and its products.

About this time every year, the new model year would begin.

The past year's models should have been liquidated from the lots, if a dealership was lucky to do so. Instead, a new shipment of vehicles would arrive. Then, the showroom gets spruced up with new signage announcing the new model year and its products.

When the day arrives, you walk into the showroom and look at the new model year's products. You notice the changes in grille textures, interior patterns and other assorted details. In the center of the showroom was the newest model: The brand new product that would boost the fortunes of the brand.

A salesman talks to you about the new product. He or she would love to put you behind the wheel of it – to become the first on the block to have it. Of course you’d want to…it's quite tempting. That was before we were inundated with publications giving us consumer advice as to what to buy…or not.

Recently on Twitter, one of my mutual followers brought up how much fun it was to visit a car dealership in the past. I do agree that as a child, the internal car person is awake by the presence of these machines. You recall being as tall as the wheels themselves. Then, we play out the ultimate child fantasy of sitting behind the driver's seat and just holding on to the steering wheel. The fun only lasts until an actual customer wants to check out the car for a test drive.

I may have discussed this maybe a few times – if not in snippets. The car dealership experience was part of my youth. It was the first contact with the automobile I ever had. The new model introductions were part of my youth that fed into what you are reading today. It was my geek. In a sense, it still is.

My father is to blame for this behavior. He was the one that kept on buying the cars for the family during part of my youth. The earliest recollection was when he bought the 1967 Chevrolet Impala Sport Coupe at Bob Keefer Chevrolet in Santa Monica, California. You’d think because we lived in Reseda that we would have bought it at our local dealership – Rancho Chevrolet. We also had a choice of Chevy dealers in the San Fernando Valley to choose from at that time: Canoga Park, Northridge, Van Nuys, North Hollywood…and so forth. How could I remember things such as this…even being just three years old?

In 1970, dad went ahead and bought another car – that 1970 Plymouth Barracuda. This time, he did buy it at a dealership in the Valley – a Chrysler-Plymouth retailer in Canoga Park. It was as the 1971s were rolling into the dealerships when dad bought this, probably off of a lease. I'm not one to question my father – though, I should’ve. Why the Barracuda? If so, why the previous model year? What did I know about that car – one that would become iconic and a classic fetching up to six digits? 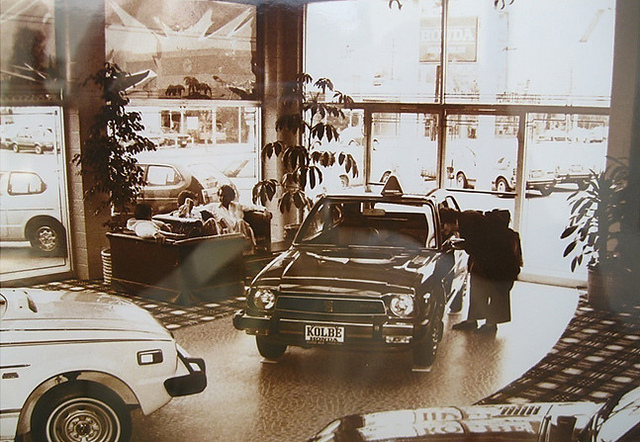 Over the years, I would visit dealerships. Every time, I wished I had the money to buy something. It also helped to understand what was going on in the industry to help pique my interest. Sales brochures were the most tangible piece of evidence of my visit to the dealership. It was my link to the vehicle of my interest.

Sales brochures have become highly valued collectables. I used to have a huge collection when I was younger, but had to give them up prior to moving out of my family's home in the 1980s. Currently, I have a small collection based on automobiles I once owned. As with my youth, these brochures remain as links back to the cars I once enjoyed after I obtained my license.

Through the 1970s, I witnessed a change on how dealerships were engaging with customers of all kinds. I heard stories where kids were given promo models or other promotional material come new car season. You give a kid a toy, they would love you forever. My memory may be foggy, but I believe we had a few of those promo models around when I was little. We now see promo models as valuable collectables fetching tens, if not hundreds, of dollars.

I could comment on dealerships and how they are today – but, I won't. As an automotive journalist, dealerships are a part of the readership of this blog. When you read a review, dealerships take them to heart – especially from locally-based writers. I will say that I like how some of these retailers are transforming into places where consumers, owners and fans of the brand can engage either in person or through social media outlets. Part of the revenue stream for a dealer these days include personal accessories, such as clothing and brand affinity products. These items create further links between the public and the brand via the retail experience.

But, there are days which I hoped that kids today could enjoy the fun we had decades ago. The days were the new model year turnover was something special. It was a time where potential customers and current owners are welcomed to ask questions about the changes from the previous year – and to bask in the glow of the latest and greatest.

That was my childhood. I wished another child would experience today what I went through decades before.