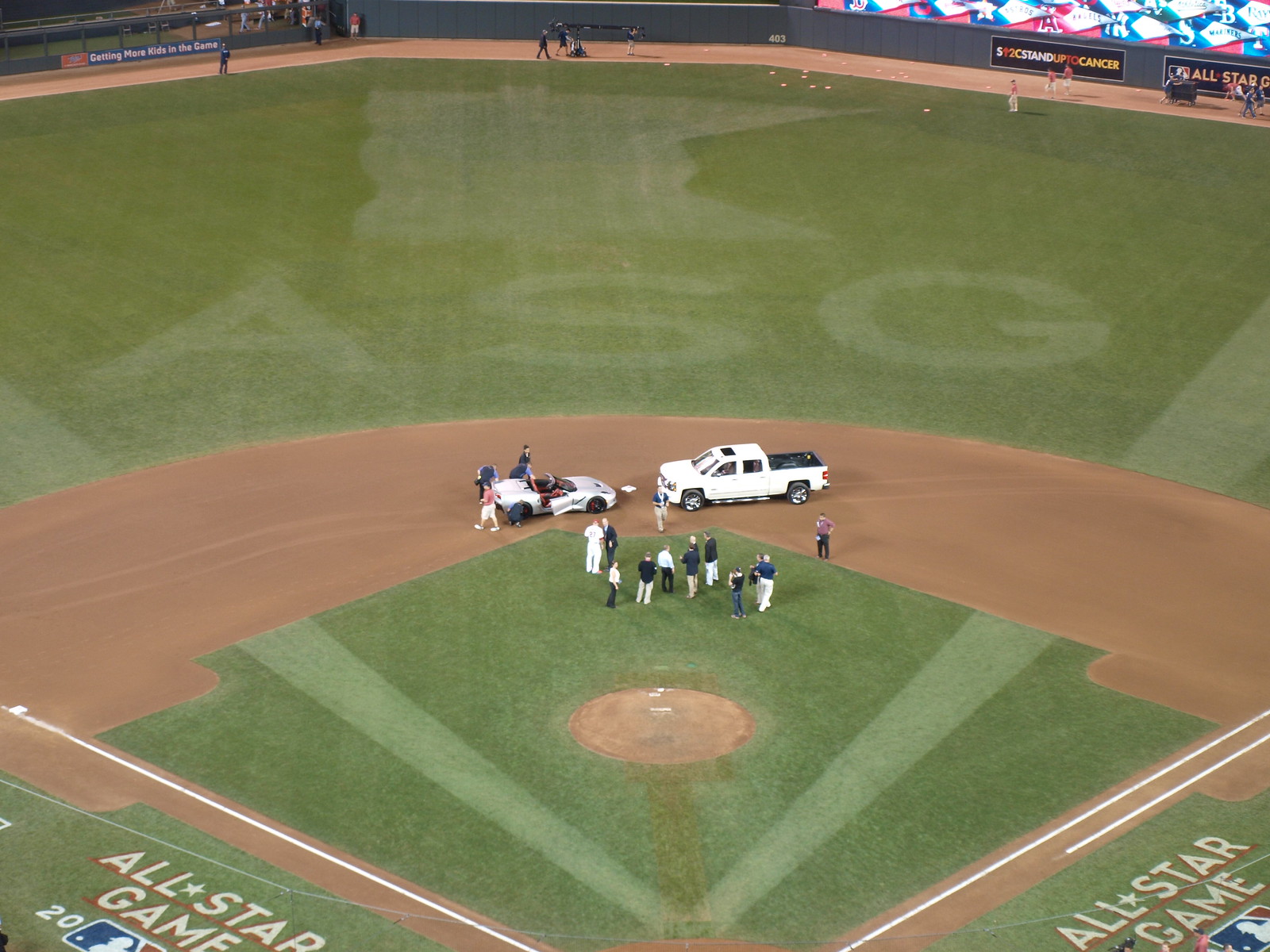 For being the most valuable person who participated in a major sporting event – they get a car.

Giving away cars as prizes for excellence was a ritual that continues today. Though today's professional athletes are making extraordinary salaries that a mere pickup truck or popular coupe would be a bit beneath their lifestyle. After all, we are living in the days where starting offensive linemen can afford to buy homes for themselves and their mother, along with a small fleet of supercars and flagship sedans.

Yet, there are no qualms about a company, like General Motors, to sponsor a professional league and provide the most valuable sports star of a major event the keys to their finest wares. It has always been like that.

It was just about 60 years ago when baseball stars did not collect an annual salary of six figures. If you played the game, you became an all-star or the World Series MVP and got a new car for your efforts. Back then, a new car was actually a huge deal.

This tradition first took hold in Major League Baseball. Back in 1955, Sports Illustrated magazine actually had a vote-in award as the World Series "Best Performer." When the Brooklyn Dodgers won their first-ever World Series, Johnny Podres became the Best Performer of that series. His award was a 1955 Chevrolet Corvette. For players not making a lot of money for the time, getting one of the most coveted automobiles of the time was truly an honor unlike any of the time.

The National Football League got into the act with Sport magazine sponsoring the Top Performer award for their championship game. This started with the 1958 NFL Championship when the Baltimore Colts shocked the New York Giants. The Colts' quarterback Johnny Unitas won the Top Performer award, which included a red 1958 Corvette. This would be the tradition all the way through to the advent of its greatest spectacle – one that was shared with the rival American Football League.

Every Super Bowl saw their MVP win a car along with a trophy. The Green Bay Packers' quarterback Bart Starr went home with a 1967 Chevrolet Corvette for his triumph in the first NFL-AFL Championship Game. Starr took the same honors the next year and drove home in a 1968 Corvette. That meant the Packers' quarterback took home a C2 and a C3!

Over the years, GM provided most of the gifts to the MVPs of the NFL's biggest game. They walked away with Corvettes, Chevrolet Camaros, Silverados, Colorados, Cadillac Escalades, and XLRs.

There were two years when a car was not presented to the MVP – Super Bowl XLIV and 50. Drew Brees of the New Orleans Saints might have understood why Cadillac had to withdraw from being a sponsor of Super Bowl XLIV. The automotive industry was suffering from the global financial crisis, Since GM took a bailout from the Federal government, it was not seen as proper for that Super Bowl MVP to receive a vehicle for his gallant efforts.

In the case of the Denver Broncos' Von Miller and his MVP accolade from Super Bowl 50, there was really no logic as to why he did not get a car. Perhaps the change in automotive sponsorship of the NFL had something to do with it. Meanwhile, Hyundai has begun awarding the MVPs of the annual Pro Bowl a pair of cars. The Genesis G80 was one being gifted to those MVPs.

Earlier in the biggest game's history, GM was not the automotive sponsor of the NFL. Chrysler supplied the MVP car starting with Super Bowl III. Joe Namath became the big game's MVP for his New York Jets' (and the AFL's) triumph over the NFL's Baltimore Colts. Namath received the keys to his 1969 Dodge Charger – and gave them to his mother. The Kansas City Chiefs' quarterback Len Dawson took a 1970 Dodge Challenger home after his MVP award for Super Bowl IV. Larry Csonka of the Miami Dolphins also took home a Dodge Charger. Roger Staubach of the Dallas Cowboys immediately thought of his family and asked magazine and Chrysler for a station wagon instead of the Charger he was originally awarded.

For Super Bowl IX, American Motors had the magazine's MVP prize. The Pittsburgh Steelers' Franco Harris won for his team's first championship. His prize was a choice of AMC and Jeep products, He chose a 1975 Cherokee, which he kept for many years after his accolade.

In the latter part of the 1970s, Ford got into the act of presenting Super Bowl MVPs their ride home. Randy White of the Dallas Cowboys received his 1978 Thunderbird as co-MVP of Super Bowl XII. After he took delivery of his prize, he wrecked the T-Bird by hitting an animal near his farm.

GM returned to the MVP car fold by giving the Pittsburgh Steelers' Terry Bradshaw a Pontiac Firebird Trans Am.

Then, a strange thing happened in the 1980s. Subaru was the Super Bowl MVP sponsor for magazine. For the Chicago Bears' win in Super Bowl XX, MVP Richard Dent received a Subaru XT for his award. So did Doug Williams of the Washington Redskins and Jerry Rice of the San Francisco 49ers. The problem with the XT was interior space. If you're a 6-foot-4-inch football player, you might not fit in an XT. In Williams' case, he gave his Subaru to his brother.

One pattern we found in awarding the MVP cars is the idea of re-gifting. Aside from the stories told above, Super Bowl MVPs gave their cars to family members, teammates, non-profit organizations, and so forth. It is indeed the gift that kept on giving.

In later years, professional team athletes were earning more money in salaries and bonuses. A car worth $50,000 and more might not be attractive to a superstar making well into the seven figures. Still, the added bonus of a car seems to be exactly that – an added bonus.

While attending the 2014 MLB All-Star Game at Target Field in Minneapolis, my fellow automotive media folks, communications people from Chevrolet, and I witnessed the Los Angeles Angels' Mike Trout make a very important decision. For his MVP award at that All-Star Game, Trout had the choice of a 2014 Silverado or a 2014 Corvette Stingray. He chose the C7 Corvette. We all felt it was the smart choice.

In the last All-Star Game, the Seattle Mariners' Robinson Cano made the same choice. This pt up a great tradition of baseball stars and their Corvettes.

Along with the NFL and MLB, the All-Star Game MVPs from the National Basketball Association and the National Hockey League also received automobiles for their performances. In recent years, Kia has been the NBA's sponsor. For their All-Star MVPs, both Russell Westbrook of the Oklahoma City Thunder and Anthony Davis of the New Orleans Pelicans regifted their Kias to struggling families in their communities.

Honda has been the NHL's sponsor and supplier of its All-Star Game MVP awards. Last year, Wayne Simmonds of the Philadelphia Flyers was given a Honda Ridgeline as his award. In 2015, the Washington Capitals' Alex Ovechkin was seen on camera saying the all he wanted was one of the Honda Accords being given away after the "draft" of all-stars during its event in Columbus, Ohio. To get one of the cars, Ovechkin would have one of the two last picks of the "draft." He was picked third from last. No Accord for the Caps' star, which would have gone to a local hockey team in the DC area for developmentally disabled children.

These days, it is seen that giving a car to a star athlete may yield mixed reactions. It was just a few decades ago that the act of getting a new car for their outstanding performance was truly a gift. It helped that with lower salaries and bonuses, earning a car for the good deeds on the field, court, or rink was a major bonus that was taken seriously. In today's professional sports world, a car might be a gift, but it depends on where it would eventually wind up. If you had the community-focused mindset of the latest NBA All-Star MVPs, they will eventually go into the hands of those who need it. Otherwise, a bonus is really a bonus…on top of your salary, other bonuses, endorsements, etc.

Perhaps a bonus that was really worth something in 1958 is more than just a regifting of one in 2018.