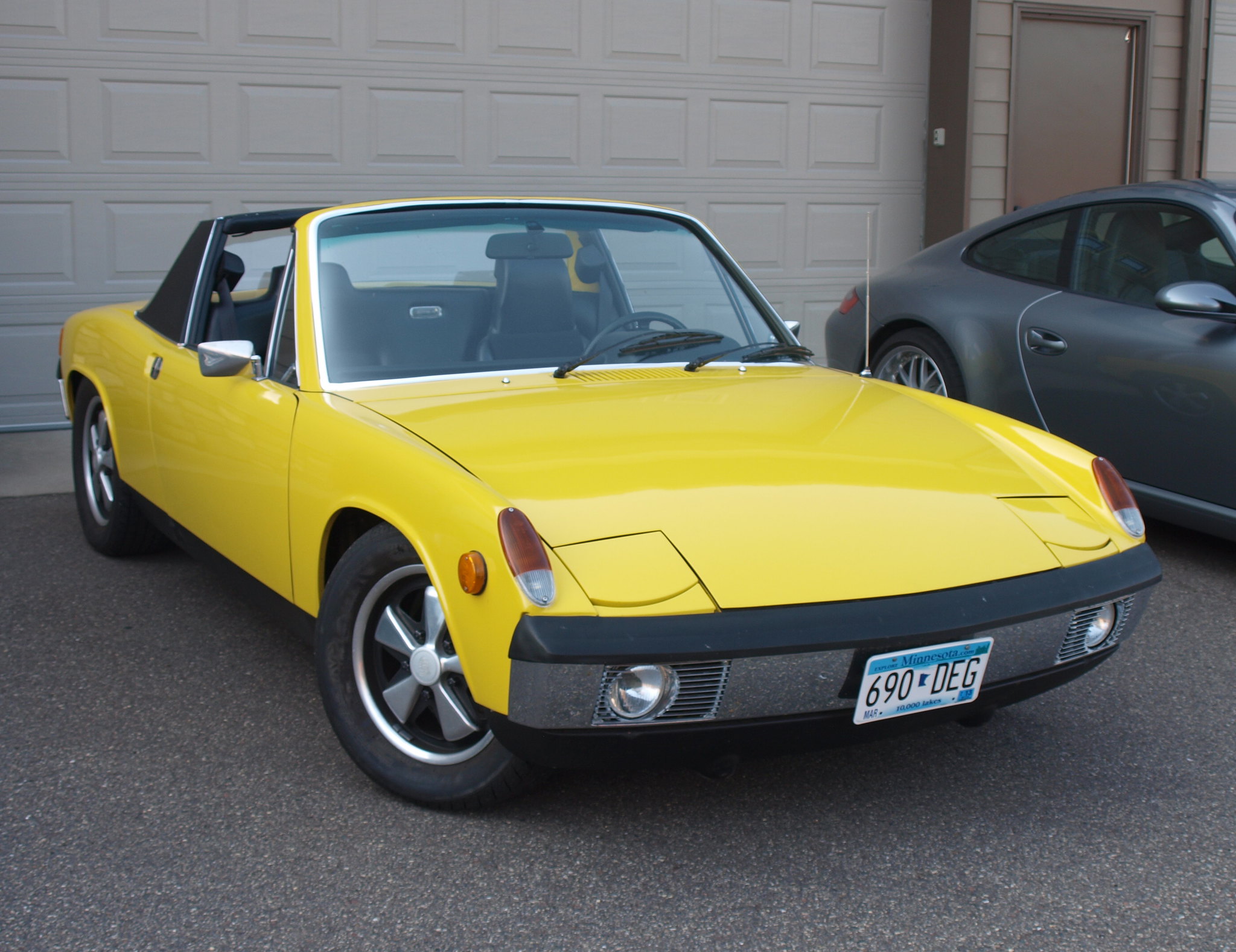 It was such at the beginning. Dr. Ferdinand Porsche's idea of a German car was to be air-cooled, mounted at the rear and can propel people wherever life takes them. That idea spawned the Volkswagen. Yet, Porsche wanted to do something after the defeat in World War II. To pick up the pieces, the company bearing his name took the Volkswagen idea and wrapped it in a sleeker package. An icon was hatched upon the world.

Through the years, the 356 and the subsequent 911 and 912 were the cornerstones of the Stuttgart company. It would be this way through the 1960s. Yet, there were moments when that path deviated just a tad. Sometimes, it took collaboration to do so. In other ways, someone in Porsche had a better idea. Either way, the iconic 911 had strange bedfellows in its history that would eventually lead to today's Porsche lineup.

Before we even talk about the Cayenne, Boxster, Cayman, Panamera and the Macan, we should look back at what Porsche had to offer next to its prized product.

Porsche never had any thought about selling something different than the 911. Yet, Volkswagen was a relative's phone call away. They stayed true to their course by keeping its air-cooled, rear-engine platform intact thanks to huge sales of the Beetle/Sedan. They did augment their sales by diversifying their product portfolio, with the Bus/Combi, Squareback/Fastback and the Karmann Ghia.

By 1969, an idea was forged between Volkswagen and Porsche. To replace the four-cylinder 912, they came up with a unique targa body that sat only two people, with a choice of four and six cylinder air-cooled engines that was lower than a 911. As development costs went up, it would end up being prices as much as some of Porsche's lowest priced models.

The 914 and 914/6 were novel ideas that garnered some excitement. In fact, it outsold the 911 worldwide, especially in the USA. Granted, it was not as practical or as spacious as its older brother, but people were fascinated by cars, such as the 914. This was the era of the Lotus Europa, a car that became sort of dream icon to pure sports car enthusiasts. The 914 was less expensive than the Europa…and was built better.

The powerful 914/6 showed how the quotient of the power-to-weight ratio could be utilized on he street as well as on the track. To shoehorn the more powerful six-cylinder engine behind the cabin, Porsche also beefed up the brakes and gearing. This model lasted through 1972, while the four-cylinder 914 remained on sale through 1974. As different as it was, the 914 complimented the 911 better than what would come as its replacement.

By the mid-1970s, Porsche's Wolfsburg-based cousins began building the improbable. They started making cars with front engines and water cooling. One would think that it would be a novel idea. Instead, this became the death knell for the Beetle and all other rear-engined, air-cooled Volkswagens.

The idea came from acquiring Auto Union and merging it with NSU by 1969. The final name Volkswagen AG gave to this new edition its family was Audi. Audi had already been a pioneer in front-drive automobiles, hence the formation of the Passat/Dasher and the Golf by 1975.

Around the same time, a replacement for the 914 was being devised by following almost the same pattern. The one concession was to keep the replacement as a rear-drive car. What transpired was a front-engined, water-cooled sports car with a rear transaxle. This was designed to ensure an almost perfect balance – 48% up front, 52% at the rear – as a response to those that criticized the 911 for being too rear heavy for so-called proper handling. This would be a challenge to try to convince Porsche customers that this kind of car would work well in tandem with the 911.

The one thing Porsche did for the 924 is to give it a lower price point. Its arrival for 1976 ensured that it would be positioned for more customers to come to Porsche showrooms (back then, they were Porsche+Audi showrooms in the USA) for those looking to get into the brand without having to pay 911 money.

The engine came from Audi. The 2.0 liter in-line four-cylinder engine was Bosch fuel injected, but paled in performance numbers to the mighty 911. Perhaps they intended the 924 to be a different kind of sports car. It was a cut above an emerging pack of sports cars from Japan and the USA, which was reflected in its pricing. Still, it attracted exactly the kind of customer they wanted – someone who wanted the badge and did not care if it was not a smaller version of the 911.

The Achilles heel of the 924 was its performance from the basic 2.0 liter engine. It was not as powerful as expected from a Porsche. That problem was resolved introducing the Turbo model in 1979. Power jumped from 115 horsepower to 170 – a welcomed change to enthusiasts that were pining for anything more than 150 in the new world of post-1970 SAE standards. Although turbo lag was prominent, it was very fast for its time. Over time, customers began to prefer the Turbo over the regular 924 – which made for tough pickings when it came to dealer stock in the USA.

Porsche's expansion plans not only wanted to cover the market below the 911. They wanted to add a luxury performance coupe. To accomplish, Porsche needed to take a larger leap into the unknown. Since they were shooting for another different set of customers, they had to add something not exactly found in that era's automobiles – real luxury. What Porsche needed to do was to define its own idea of luxury and apply it to their top shelf offering.

Somehow, they crafted a "modern" version of the 911 shape onto a front engine, rear transaxle platform. The 928 arrived in 1978 to offer a halo product to potential Porsche customers. It was a larger vehicle than most enthusiasts anticipated, but for good reason. It was a 2+2, just like the 911. It was wider – some say almost as wide as a 911 Turbo. It also had a huge hatchback opening, which lead to a space about just as large as today's Panamera.

Underneath the taped hood of the 928 was a 4.5 liter V8 with a single overhead camshaft over each cylinder bank. In the USA, this V8 put out 219 horsepower. It was the first to employ the Weissach axle, which enabled the rear wheels to steer. This was done to improve cornering ability for such a large car. Customers could choose a dog-leg 5-speed manual or a Mercedes-Benz derived three-speed automatic. The latter would be supplanted by a four-speed unit in 1980.

Both the 924 and 928 added customers and profits back to Stuttgart. Though the 911 was the shining star – a platform for all works motorsports endeavors – acceptance of the 924 and 928 as Porsches were earned even in the face of the purists. The 1980s would see this as the status quo – even with a newer version of the 911 looming towards the end of the decade.

Maintaining the status quo is one thing Porsche was striving to do. In 1982, the accomplish this by re-framing the 924 into the 944. The shape may be the same, but by adding new aerodynamic aids and switching to a massive 2.5 liter four-cylinder engine – essentially half of the 928's V8 – the 944 was transformed into a more desirable car.

At 143 horsepower, the 944 went into battle against a new wave of sports coupes. You had Chevrolet Camaro Z28s, Ford Mustang GTs, Toyota Celica Supras, Nissan 300ZXs and Mitsubishi Starions wanting to battle the Porsche. In terms of performance, the 944 matches up extremely well. In terms of price…well, you were paying for a Porsche.

While the 944 enjoyed great success as an entry into the world of Porsche, the 928 also enjoyed its own level of success. Various updates came online, including the S, S4 and a limited run of GTS models. The latter became the first Porsche to reach the $100,000 threshold. No one wanted expensive large Porsches anymore by 1995. The 928 was dropped after sales plummeted due to rising sticker prices.

The 968 was more than just a replacement for the 944. It only shared 20 percent of the former car's parts, while everything is all-new. The engine was enlarged to 3.0 liters with 237 horsepower on tap. A turbocharged model was created, but it was only available in Europe. The new engine featured Variocam variable valve timing – a first for Porsche. Customers could choose from a new six-speed manual or the Tiptronic transmission – the latter also being a first for Porsche.

In 1995, the winds of change arrived at Porsche. No longer did they need a front-engined, rear transaxle vehicle anymore. The call was to return a purist kind of Porsche – one where the engine sits behind the driver, not in front of it. While the 968 and 928 bowed out, the first generation Boxster arrived on the scene. It would not be until 2005 when the Cayenne will arrive to shake up convention again.

Even as the 911 ruled the showroom, a string of accompanying models graced alongside it to entice new customers to come to the brand. Each one was fraught with the same concern – it might erode the brand's essence. Instead of challenging the original creation – the 356/911 lineage – they augmented it. Each one took on a life of its own, attracting those who never thought of a Porsche before.

Each of these stories are not too different than what Porsche is experiencing today. The Cayenne and Macan are leading sales for the brand, mainly attracting new customers to Porsche. The Panamera continues to surprise those looking for a four-door flagship car, keeping in the performance tradition of Stuttgart's finest. With the upcoming 718 Boxster and Cayman, some have even said these two reflect what the brand and the 911 used to be.