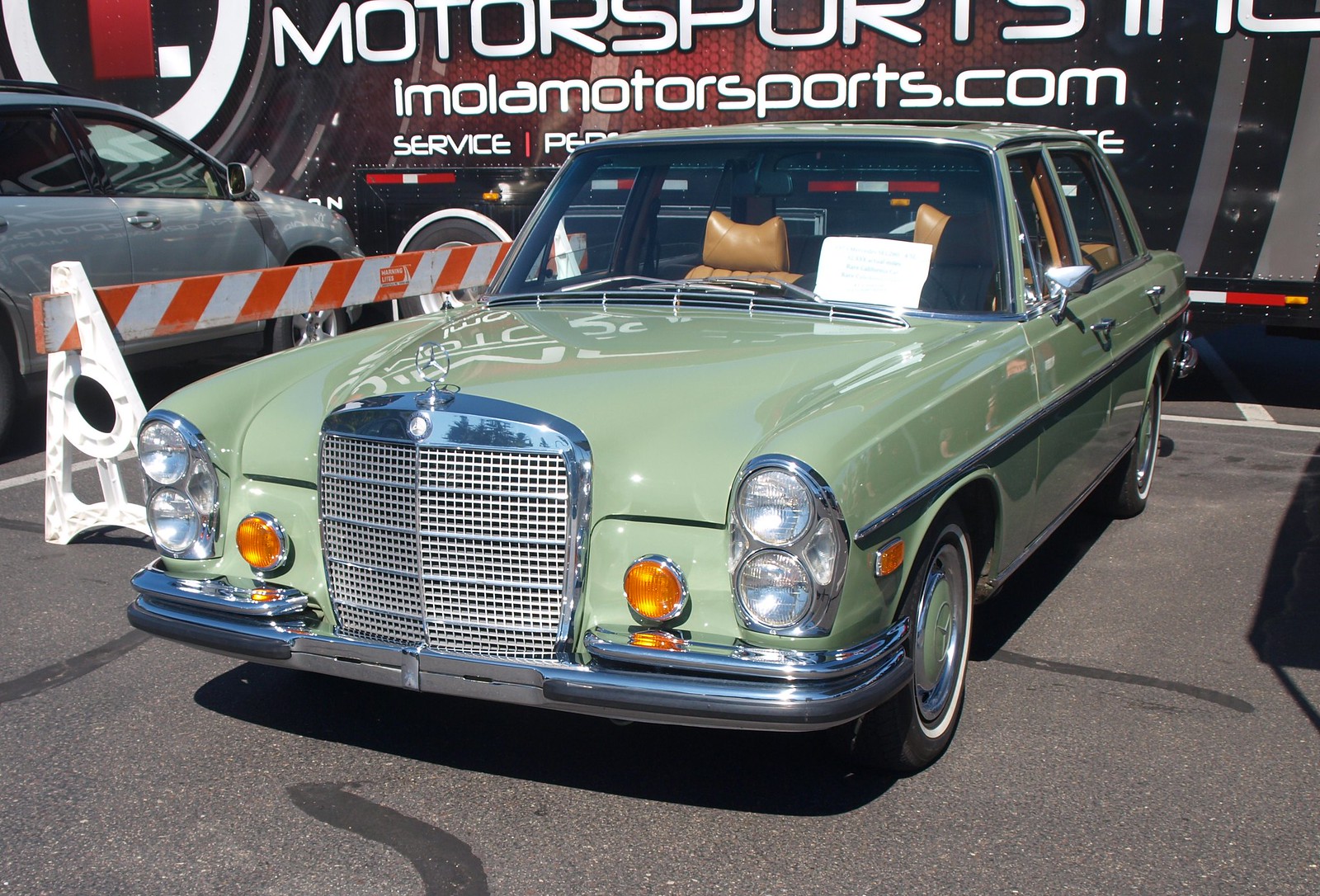 If one product signifies Gottlieb Daimler's sage words "the best or nothing," look no further than the S-Class.

For Mercedes-Benz, the S-Class represents all that is powerful and successful.

For as long as I have been alive, this had always been the position of Daimler AG's most prominent product. To make it otherwise is to disrespect it. If one product signifies Gottlieb Daimler's sage words "the best or nothing," look no further than the S-Class.

The Sonderklasse (Special Class in German) is supposed to the best car in the Mercedes-Benz lineup. In 1972, it was christened as the S-Class as the common lexicon for such a car. Yet, the origins of the Sonderklasse goes back a bit further.

Mercedes-Benz would trace the "modern" S-Class origins back to the original "Ponton" models of 1954. The W180 was the most advanced car to come from the ruins of World War II. Its design was named because the shape of the fenders resembled a pontoon boat. It was restrained in design, but sported the trademark radiator grille that would evolve throughout its life. The secret to the Ponton's success was the construction, the first unibody architecture in Mercedes-Benz's history.

These Pontons re-opened markets for Mercedes-Benz. While sedans were the core of the S-Class business, early models were available in coupes and convertibles. They were seen as mature, yielding a price that matched with the finest cars in the world. They were much nimbler than the luxury car leaders of the day – namely Cadillac.

It world be Cadillac that influenced the next generation of the S-Class – the Fintail W111. "Fintails" were exactly that – tailfins on a Mercedes-Benz. Yet, the German design was much more retrained than their American counterparts. Yet, they matched Cadillac's eventual reduction of its most famous exterior design feature. In its own way, the Fintail S-Classes were the instrument of the establishment of a Stuttgart-backed sales organization in the USA.

The Fintail also established a design language that would stick into the 1970s. In North America, dual headlamps were stacked on top of each other, while the radiator grille was prominent at dead center. European versions wore aerodynamic headlamp housings – a first for Mercedes-Benz. They would house all of the separate lenses behind a glass housing that formed the shape of the fenders.

These models opened up the door for many variants throughout the 1960s. The Grosser was the ultimate limousine. Its clean design lent to one of the biggest V8s the company has ever built, sized at 6.3Liters. The Grosser helped facilitate a change in the Fintail, as its more subtle rear end showed up in the W112 in time for growth against its larger American and British competitors.

The W112 served as a entree on how Mercedes-Benz views luxury. There was now clear definition between its more common models and its Sonderklasse. Yet, the 1960s were coming to a close. It was the right kind of luxury for its time, but engineers and designers at Mercedes-Benz were not satisfied. They needed to see the future where efficiencies can be achieved through intelligent choices.

By 1972, it was all change. The W116 emerged as Mercedes-Benz began to look at aerodynamics and safety more closely. The result is a less upright front end with headlamps next to each other and a prominent grille that bridged the two lighting units. You also saw ribbed cornering and tail lamp units that facilitated airflow throughout the body. Inside was even more modern with better safety features for occupant protection. It was designed to facilitate the next round of safety technology to be introduced in future models.

In the W116, fuel injection became prominent on every engine. A new diesel was introduced – a five-cylinder turbocharged unit that was both powerful and efficient. It was also the first time a V8 model had its own designation, culminating in the popular 450SEL.

The result was amazing for Mercedes-Benz. In North America, the W116 took over the domestic luxury car market. It sent Cadillac and Lincoln back to the drawing board. It killed Imperial. Yet, it also inspired BMW and Audi to craft cars that would challenge the S-Class.

The point to the W116 at a critical phase in this market was to leverage a more efficient car when its North American rivals were seen as too big, too thirsty and too obtrusive. Though the 450SEL is seen as less consumptive today, it was more efficient of a car next to the Lincoln Continental and the Cadillac Sedan de Ville of its time.

On a personal note – the W116 is one of my favorite cars of all time. I was the right Mercedes-Benz for the right time.

The S-Class continued its dominance in the luxury car field with a new model for a new decade. Taking the lessons of aerodynamics in the W116, Mercedes-Benz shaped an entire car based on what they learned about cheating the wind without compromising on the design tenets of the brand. The shape of the future arrived by 1980 with the emergence of the W126.

The slickly designed W126 would become the most popular and best selling Sonderklasse ever. At this point, you need not build a Grosser to exude power and excellence. A long wheelbase W126 would do perfectly. Simply, everything changed – including a new line of engines and a completely new suspension design for the future. Inside became more modern with more luxury designed with safety in mind.

The biggest advance on the W126 was the extensive use of passive and active safety features. This would be the first to employ driver's side airbags as standard. It also had anti-lock brakes as standard. Other may claim they installed these features before Mercedes-Benz had done so, but the company would be the first to emphasize its benefits through real results towards installing them across the model line.

If there was one "complaint" about the W126 would be the bulkiness of the car. The construction of safety engineering gave it a more massive look. The W126 gained key weight in areas that would challenge efficiency. It would be a foretelling of the development of today's car.

The realization of these issues came in the next S-Class – W140. Some might say it was great because of the complete package of safety, engineering and aerodynamics. Yet, the once-prominent radiator grille was flushed inside the front clip. There was a simplification of the design outside while things got complicated inside. The first AMG models appeared on the W140, providing another level of performance never seen on a production S-Class.

In the end, it yielded more criticism of any Sonderklasse in its history. That was until the next model arrived several years later…

The next S-Class promised to be lighter, sleeker and more efficient. When the W220 arrived in showrooms by the end of the 1990s, another problem popped up: Quality. Never before has Mercedes-Benz's greatest product ever been called "poor" in terms of quality and reliability, as stated by Consumer Reports.

The fix had to be made. Quality had to return to the Sonderklasse, or it would be curtains for Mercedes-Benz's flagship. The first move was to end the "Merger of Equals" by reigning in Daimler AG and offing Chrysler out of Stuttgart. By 2007, the W221 arrived to save the S-Class. It did, actually. New technologies were fused onto a car that started retaking shape – the prominent grille and some design cues from the ultra luxury Maybach.

The W221 soldiered on as Daimler AG folded Maybach after its brief run. However, Mercedes-Benz knew it had continue making the S-Class even better. It had to continue sitting on the throne amongst all flagship sedans by raising the bar in terms of technology, safety, engineering, and luxury.

That answer came in the W222. It was exactly what Mercedes-Benz needed last decade. The return to the plinth reserved for the absolute finest automobiles in the world. Yet, it has done so by upping the technology game. Driver assist features were above and beyond the company's expectations, while infusing the Mercedes-Benz User Experience – MBUX – on to two wide screens across two-thirds of the instrument panel.

This flagship would also herald the return of there Maybach name to the Mercedes-Benz lineup. By extending the roofline, the Mercedes-Maybach S-Class seemed like a compromise between the former 57 and 62 models that were promised as the company's match for the likes of Rolls-Royce and Bentley. However, the Maybach's return also came with a more attainable price point compared to comparable models fielded by these two German-owned British ultra-luxury marques. Perhaps a sign that you can have the "best or nothing" with all old the absolute luxury at a fraction of a fortune.

Which brings us to the W223 of today. This latest S-Class was developed to heighten everything that was presented in the previous generation. Some may have clocked it for its design, but no one can deny how much further the level of technology and safety had been integrated onto this new model.

When I briefly drove the newest S-Class last October, I came away with some feeling of letdown. Granted, you have to respect the car for what it has accomplished over the past several decades, but something told me that there may be too much technology, over-engineering, and driver assistance features that have pushed the flagship well beyond the tenets that made it a game-changer back in the 1970s. It felt special – but it also did not feel special enough to recall the triumphs of the W116 and W126.

Even today, the S-Class lives on a plinth. It is a flagship car for those who want the greatest automobile ever engineered. That has always been the way Mercedes-Benz approaches its showcase of everything the company pits into their vehicles. That is why they originally called it their "special" car.