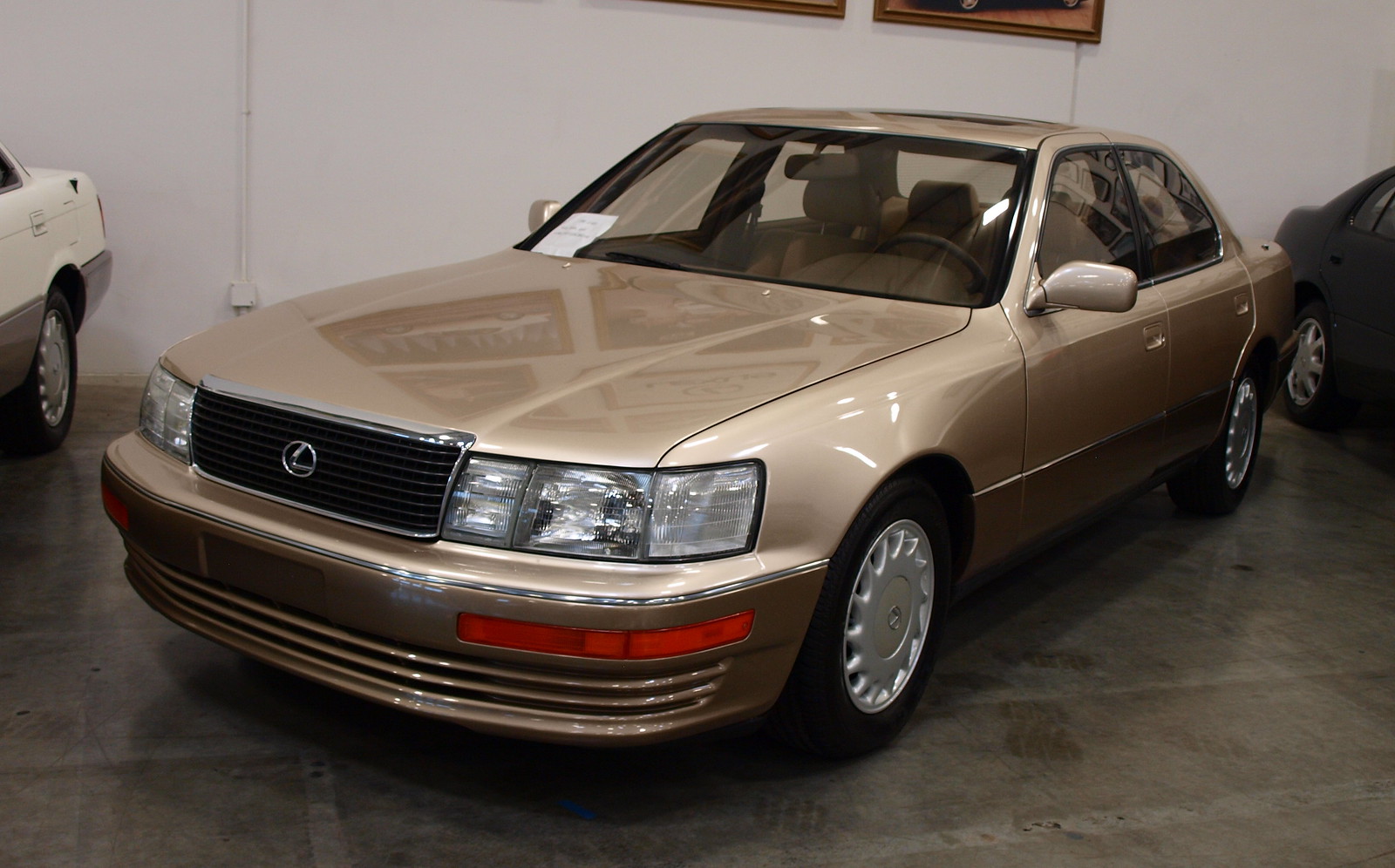 Luxury has never been the same over the past 25 years.

By 1989, luxury cars were defined by long histories. The names of Rolls-Royce, Cadillac and Mercedes-Benz yielded over a century's legacy by providing the finest of its kind. These three names always had been there as symbols of great power and wealth. They withstood war, economic collapse, and a changing global landscape. Soon, their names grew – Jaguar, BMW and Lincoln.

These western brands locked down a marketplace replete with those who benefitted from the policies of Reagan, Mulroney, Thatcher and Kohl. They also saw their worth expand where newer wealth is being enjoyed, including the Persian Gulf and across Asia.

Yet, there was a country that was poised to change the paradigm of luxury automobiles on a truly global stage. Though some were skeptical that anything from that country would fall short of the German flagships. In the end, those skeptics were ultimately silenced.

That country was Japan.

The Japanese already made luxury cars. They were only for local consumption and reserved for the Royal Family and major government officials. Japan already dabbled on premium cars for other markets – the Honda Legend, for example. The 1986 Legend became an important car that it launched its own brand in the USA – Acura.

The onus fell on Toyota and Nissan to come up with a truly global luxury car. Toyota was very serious about taking on such a project, they developed a sedan that appeared to challenge the Germans, the British and the Americans by upping the content and the performance to be at least on par with them.

In 1989, Toyota beat Nissan to the bell. The result was not only a flagship sedan crafted apart from anything made in Japan; it launched a new brand.

Lexus may have been born in Japan, but the first place you actually saw its name was in the USA. As the first dealerships opened their doors, luxury car buyers were stunned. Toyota's F1 sedan project evolved into the LS 400. It was the focal point for the brand and the LS certainly struck a chord with the most discriminating buyers in this market.

The LS 400 came from a clean sheet of paper. There were only a few pieces that were taken from the Toyota parts bin. The engine was all-new: a 4.0liter V8 with 250 horsepower on tap. The transmission was new, as was most of the chassis and a lot of the electronics on board. The design was unlike any Toyota until that time. This helped to make the LS attractive to a customer base that wanted the best of everything without compromise. Not to mention, the LS undercut its German and British rivals with a starting price of $35,000 – that was still big money back then.

The LS was quieter than its rivals. It was more efficient to avoid the Gas Guzzler tax that loomed on the stickers of Mercedes-Benzes and BMWs of its time. Yet, it provided an entry to not just US customers – it started to make inroads in key parts of the globe, as well. However, in Japan the LS was not called a Lexus – they sold the car as the Toyota Celsior.

However, the LS was not the only car at the Lexus showroom. Unlike the flagship, the ES 250 was related to the Camry – except for the visible parts. The pillarless hardtop sedan came with a 2.5liter V6 and most of the Camry's premium goods. Still, the badge was there to remind us that it was more than just a Camry. The trick was to give Lexus consumers a less expensive ($22,000 in 1990) choice for those who are not ready for the big LS.

With vehicles in the showroom, there was something else that brought customers to Lexus in the beginning. If you are selling premium products, you must back them up with superior service. Honda employed this philosophy through its Acura brand. Lexus took it several steps further. The contemporary elegance of the showroom was one thing. If your Lexus needed service, you were simply given the best treatment. Loaner cars were readily available, as was roadside assistance and a commitment to a quick turnaround on service trips. It added up to their first J.D. Power Customer Satisfaction Index award win in 1991 based its first year in business. Lexus ended Acura's four-year streak of winning the same award.

That award sent a message to anyone catering to the luxury car market. It is one thing to have a long warranty and other services without proper execution. Lexus knew this in observance of what Mercedes-Benz, BMW and Cadillac dealers have done. They also knew that you do not vary service levels per dealer, but become consistent at every location. Lexus required their dealers to build properties from the ground up when possible. They needed showrooms and other customer places to be as consistent as the next Lexus dealer. Most of all, you were an exclusive Lexus dealer – not one that sells Toyotas or another brand within the new car space.

The brand's obsession with "perfection" drove sales leadership and challenged its competition throughout its history. Lexus' interpretation of "perfection" grew to a model lineup by 1999 that covered all of the key segments in the luxury car field. The original SC challenged the eye while providing a level of performance reserved for more exclusive brands. The first GS also challenged the eye and retained similar performance levels, though introducing Lexus customers to a sporty mdi-sized luxury sedan. The Toyota Land Cruiser was repurposed as the LX with more luxury on board, while maintaining legendary off-road capabilities.

Lexus also introduced a new segment amongst luxury automobiles. As the SUV craze continued to burn and cut into minivan sales, there was a need for a similar vehicle that combined the ride height and passenger needs of a SUV, but with a more civilized drive. It had to be built on a car frame instead of a truck one. The Lexus RX arrived in showrooms for the 1999 model year at a starting price around $30,000. It struck a chord with upscale suburban dwellers to the point of becoming the most popular model of the Lexus lineup.. This rings true today, as the RX remains the top seller for Lexus.

At the end of the 1990s, it was clear that the hottest luxury segment would be the sport compact sedan. Toyota was developing such a sedan for a few markets, but never intended to introduce the IS to Lexus showrooms. We were glad they did. The original IS was distinctive, but with a scowling eye on the BMW 3-Series. For the 2000 model year, the IS presented itself as the enthusiast's choice on the Lexus showroom floor. Its design elements would become influential for years to come. If you noticed the instrument panel of the latest IS F Sport and on the LFA, you might notice some influence from the original IS.

Lexus settled into a groove during the 2000s.They expanded the lineup, but concentrated on offering hybrid drivelines than anything else. The global financial crisis and the slew of global recalls hit the brand hard. Not to mention a wave of criticism that the design and image began to turn towards being bland.

During that time, Lexus had been developing something that would spice up its image. The LFA was a vehicle that defied conventional thinking – supercar power, a staggering price tag and a very limited production run. However, the $375,000 LFA influenced everything that came afterwards.

Lexus never really intended to produce the LFA as regular part of the lineup. Instead, it was an exercise. The supercar was a showcase for the brand to show what it could do. Most of which have found their way onto the rest of the lineup. If you look at the CT 200h, GS sedan and the latest IS, you will see bits and pieces from the LFA grafted onto their respective models.

Though the LFA represented what was possible, Lexus needed an identity to make it stand out further. Some might not like the Spindle Grille, but it represents the image of what Lexus has to be for today and the future. Somehow, you may have found just scant traces of it on the LFA – if you look real close.

This is where Lexus is at on its quarter century journey. Sales are up, new product is arriving and the brand's "relentless pursuit of perfection" drives what the next chapters of this story.

But, there is more to the story. Lexus has always been on my radar, even before the first showroom opened. The original LS caught my attention. It showed me what was possible when the right minds were given the freedom to create something groundbreaking for the company and the Japanese auto industry.

Twenty-one years later, Lexus played a significant part of this work you are reading. The first vehicle to be reviewed as provided by the manufacturer was a 2011 Lexus IS 250C. From that starting point, I had reviewed practically every Lexus sold since – except for the LFA and the HS 250h. I should be an expert on the brand, but this is just scratching the surface.

The experience and the observation of the brand and its short legacy points not only to upholding its advertising slogan. It is about being relevant and part of the conversation. After a quarter century, Lexus still has a place at the table – as "relentless" in the "pursuit" for keeping that spot.