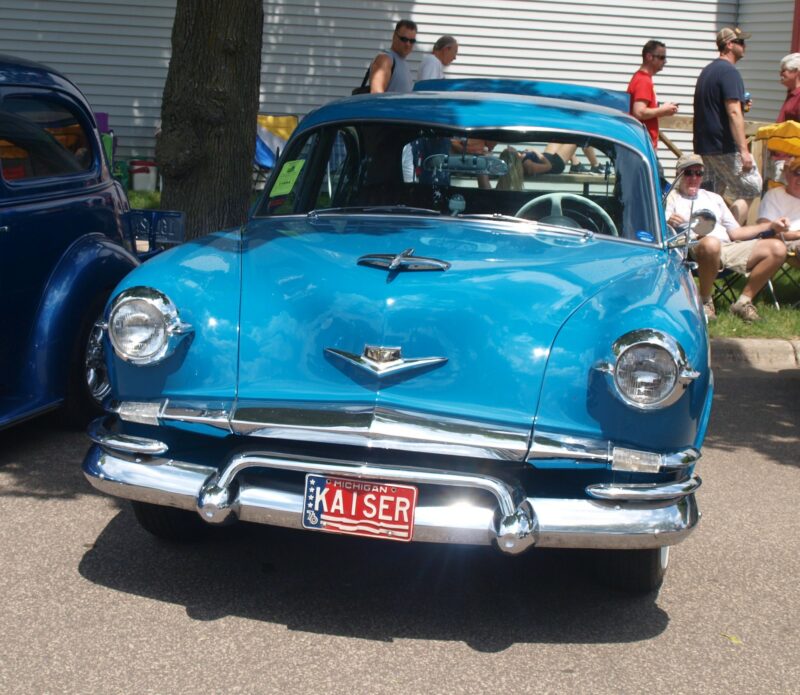 Automotive historians could tell you that the industrialist had his hands in practically everything after World War II.

He started out as a photographer in Lake Placid, New York. Once he moved to Spokane, he got into the construction business. Then paving, shipbuilding, and healthcare. After World War II was over, he got into producing automobiles.

Automotive historians could tell you that the industrialist had his hands in practically everything after World War II. Eventually becoming one of the key producers of aluminum in the world.

Kaiser’s entry into the automotive sector came as an opportunity to take what he learned from shipbuilding and turned it into supplying a postwar America with badly needed new automobiles. His company achieved this in the face of existing automakers trying to ramp production back up with warmed over 1942 models for 1946.

Kaiser was not setting up a start-up automaker. Before World War II, Graham-Paige survived the Great Depression by attempting to be innovative. They used supercharging to induce performance and economy from their late 1930s models. By 1940, the company stopped producing aiutomobiles altogether.

An executive at Graham-Paige, Joseph Frazer, held the keys to the former company’s assets. Kaiser connected with Frazer in 1945 to see whether they can start the company back up after the war. Instead of using the Graham-Paige name, they renamed the company Kaiser-Frazer.

As the old plant that Graham-Paige owned was sold to the Chrysler Corporation, a new facility to build automobiles was sought. Ford operated a plant at Willow Run Airport and have been offered up as a surplus postwar asset available for sale through the War Assets Administration. Soon Air Force Plant 31 would become the manufacturing base for Kaiser-Frazer.

Converting the bomber plant into an automotive production facility was rather easy. To which vehicles should be built there presented a challenge unto itself. The original idea was to create a Kaiser automobile that had a front-drive platform that was attainable to the customer. A Frazer was developed into a conventional rear-drive vehicle that would compete in the mid-priced segment.

In 1946, prototypes of both the Kaiser and Frazer were shown at an event inside the Waldorf-Astoria hotel in New York. These two prototypes gave us a glimpse into what postwar automotive design was leading to. The integration of fenders further into the body, a more integrated – rather, slab – side profile with a more modern roofline, an enlarged conventional trunk area, and an evolution in interior design from 1942 automotive designs.

To meet the demand for the new automaker’s timeline to get vehicles into production for 1947, the issue of whether they can produce an advanced front-drive platform was brought up. The problem was two-fold: Time and money. While front-drive automobiles existed before World War II – think Citroen and Cord – being able to develop something along those lines without referencing attainable engineering took a lot of time and investment to get into production. Kaiser-Frazer’s timeline was tight, and the resources were not available to meet the 1947 model year production schedule.

To save money, the Kaiser and Frazer cars ended up sharing chassis and bodies. Both models had distinctions inside and out to ensure they are meeting their intended customers. Harold Dutch” Darrin did the design work, which garnered praise from the Fashion Academy of New York. They awarded the Frazer their Gold Medal for design achievement.

When the Frazer first arrived at their showrooms, they were actually identified as Graham-Paige vehicles. The stylish Frazer arrived with the Kaiser for the 1947 model year as one of the first true post-World War II designs to be sold to the public.

Both models were powered by an inline-six-cylinder motor built by Continental. The Red Seal “Supersonic” six only put out 115 horsepower – which was adequate for the 1940s. No one expected the Kaiser or Frazer to be fast machines. Just enough to earn the trust of car-hungry consumers after the war.

Initial sales were strong. That was due to the want of new car designs. Kaiser and Frazer delivered to their intended demographics of the era. This first-generation vehicle remained in production through the 1950 model year.

One such model drew plenty of attention to the first-generation Kaiser-Frazer lineup. Frazer sold a four-door convertible in the Manhattan series – a unique offering for the time. It was perhaps one of the few such models in the postwar era, which attracted the mid-priced crowd to the Frazer brand.

Frazer would continue as a brand until the 1951 model year. That final year included another innovative model – the Vagabond. This model offered a split hatchback in the rear instead of a trunk. That opened up cargo space and access giving consumers an option instead of shopping for a station wagon. The rear seats did fold down for more space – or, to allow people to sleep inside their Frazer.

The 1951 model year yielded another new entrant into the automotive market. The Henry J was a “compact” car that was designed as a second vehicle for the typical household. Nash introduced the Rambler as one of the first in this segment. Henry J was produced for economy and scale to meet a certain price point.

Sold only as a Darrin-designed two-door sedan, the Henry J was powered by a four-cylinder engine supplied by Willys-Overland. Later models would also get an inline six-cylinder engine from Willys, as well. The simplistic coupe was also sold by Sears Roebuck and Company as the Allstate from 1952. While initial sales at Kaiser-Frazer dealers were brisk, the interest in the Henry J and Allstate waned in the next couple of years. Sears dropped the Allstate after two model years.

Meanwhile, Kaiser introduced a new generation model for 1951 that featured more of Darrin’s advanced design language. While retaining inline six-cylinder power, Kaiser found itself behind the rest of the industry and their rush to produce high-compression, overhead-valve V8 engines. However, the second-generation Kaiser models were well ahead of the design curve, save for Raymond Loewy’s Studebakers of the same era.

This new Kaiser also received components from other suppliers. For example, General Motors sold Hydramatic transmissions for the new generation models in keeping with industry trends of the early 1950s. The deal would eventually include Oldsmobile V8 engines, based on whether capacity could be expanded at the Lansing production plant.

In the meantime, Kaiser carry on what Frazer started with the Vagabond by creating the Traveler with the new generation body. The new model continued many of the Frazer’s innovations as a more practical sedan with the trunk flowing into the passenger area.

As Kaiser started concentrating on its larger models, Willys-Overland soldiered on until it ran into fiscal trouble. The decline in Henry J/Allstate sales affected the revenue from sales of drivelines. The Toledo-based company continued to produce the civilian Jeep since the end of World War II. Willys-Overland struggled to meet their bottom line and was looking to eventually cease operations.

In 1953, the renamed Kaiser Motors Corporation framed a deal to purchase the assets of Willys-Overland. In turn, the company was renamed Willys Corporation. The result of this acquisition was multi-fold. The new company became responsible for Willys, Kaiser, Henry J and Jeep vehicles. In turn, they consolidated production at Willys’ Toledo factories. That would lead to the sale of the Willow Run facility to General Motors.

Production of Kaiser automobiles were relocated to Toledo until 1955. They would be produced alongside the Willys Aero, a compact competitor to the Henry J. Yet, the market conditions that would affect the demise of the last remaining independents in the automotive industry in the USA would also send the Kaiser and Willys brands into history’s dustbin. While Willys and Kaiser consolidated, so did Nash, Hudson, Studebaker and Packard into American Motors and the Studebaker Corporation respectively.

There was one last curtain call for Kaiser. Darrin saw the trend of European-style roadsters and sports cars permeating the market. He designed one for Kaiser using his namesake as the nomenclature. The two-seater was powered by an in-line six-cylinder engine and a three-speed manual gearbox. Only 435 of the sliding door roadsters were built.

By 1956, only the civilian Jeep remained as the sole brand for the company. Willys and Kaiser would establish vehicle production in South America and would continue to do so in the next few decades afterwards.

However, Jeep would see its fortunes turn as the company focused on expanding and modernizing the lineup. In 1963, the company would be renamed Kaiser-Jeep. That coincided with the introduction of the Jeep Gladiator pickup truck and Wagoneer SUV. In the next few years, the Jeep lineup also consisted of a new Jeepster, the Forward Control van, and the CJ-5.

In 1970, it was decided that Kaiser would leave the automotive business altogether. In response to this announcement, American Motors acquired Kaiser-Jeep and their Toledo facilities. AMC’s stewardship of Jeep would last until 1987, when Chrysler would acquire the valuable brand and fold it into their lineup. The Jeep brand has seen many owners – both wholly and jointly owned – since it became a civilian in 1945.

What is Henry J. Kaiser’s legacy be in the automotive industry? To try to break into this business, you have to be innovative right off the bat. While the front-drive Kaiser was shelved due to time and money in 1946, the company made up for it by advancing automotive design after World War II. They also brought out innovations and dared to dream big.

Even in the face of an industry that was no longer friendly to anyone outside of General Motors, Ford, and Chrysler, Kaiser knew they had some fresh ideas. When they ran their course, the company took on a new task – to advance the Jeep brand at a time when SUVs were a completely niche market.

In the end, Jeep became Kaiser’s legacy. Yet, we should never forget those brief moments of brilliance coming from this industrialist’s entrance into the automotive industry.