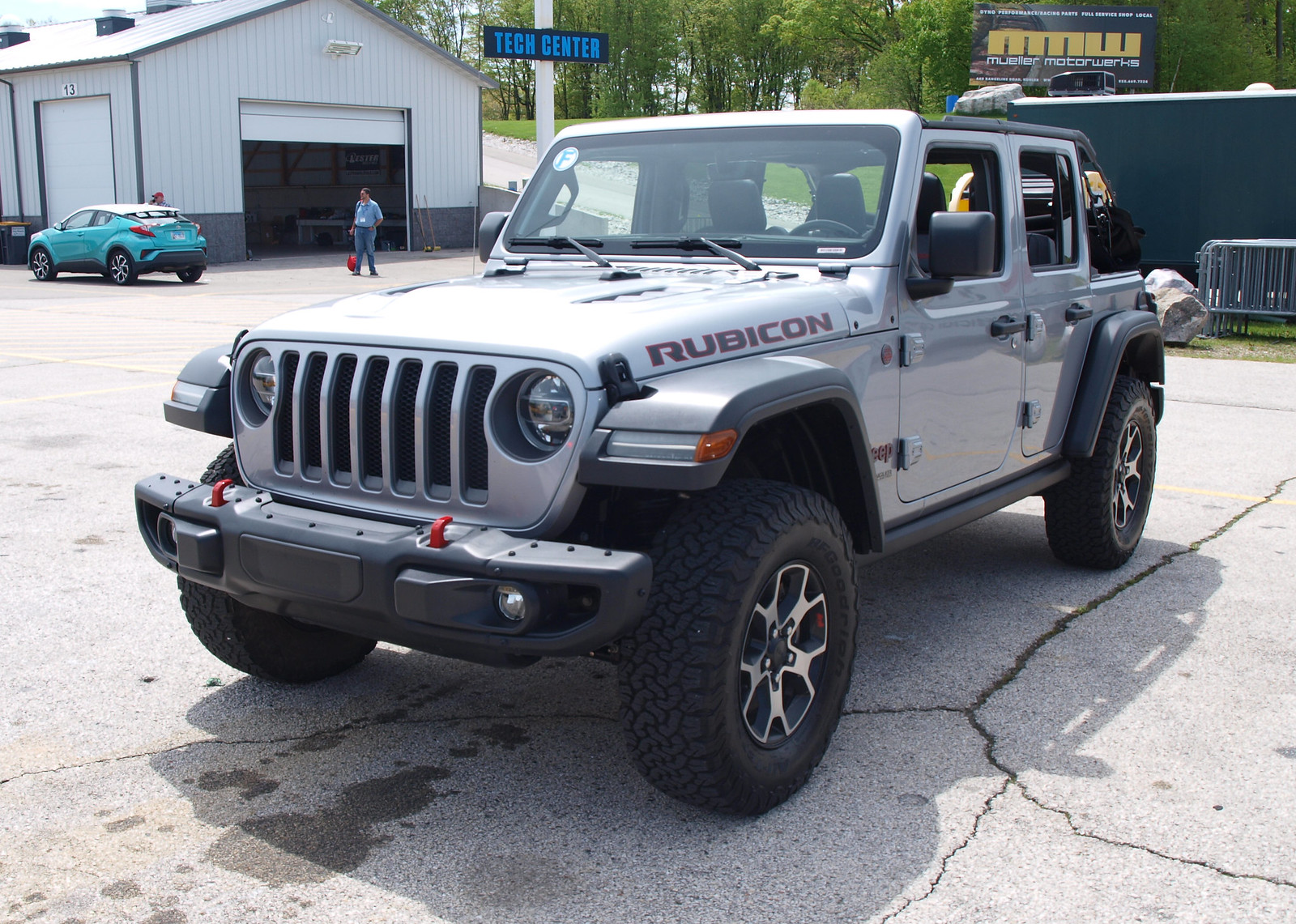 When you think of summer, you think of escape. You think of unlimited enjoyment, excitement, and fun. You think of living without limits where the possibilities never end. When we think of all these things in an automobile, one brand comes to mind: Jeep.

You think of unlimited enjoyment, excitement, and fun. You think of living without limits where the possibilities never end.

When we think of all these things in an automobile, one brand comes to mind: Jeep.

Jeep has been the definition of escape since before the first one was produced. It would take on the role of wartime hero before it was decommissioned into civilian life. Today, Jeep is what keeps the lights on and dealership happy around the world for Fiat Chrysler Automobiles.

Before it became the money-raking entity it is today, Jeep started from humble beginnings. Not from some design studio or the shop floor, but from a Department of War requisition sheet.

In previous conflicts, the idea of a multi-purpose vehicle to transport troops and other personnel from the lines had undergone many different iterations. The horse and buggy gave way to more motorized methods that were crude and somewhat detectable by the enemy.

The other purpose was for reconnaissance on the enemy. It needed to be done by a vehicle that is small in stature and stealth by nature. This addressed the issue of being detectable by the enemy, as the vehicle needed to blend in the terrain and can get away from its position quickly without giving itself away.

The Department of War put out a requisition for a "quarter-ton, cross-country reconnaissance vehicle." The key term here is "quarter-ton," as a designator that it needed to be as light as weight as possible to do the job. As the war was already raging in Europe, thanks to Germany's invasion of Poland, the bids were being finalized with three companies coming out on top: American Bantam, Ford, and Willys-Overland.

American Bantam had a really great design and fit all of the needs of the Department of War. The main problem was the supply chain to produce the number of vehicles needed in the war effort. While Willys-Overland could produce enough chassis and engines in Toledo, Ohio, American Bantam's Butler, Pennsylvania plant lacked the capacity to build the bodies. Because of this, the bid was jointly awarded to Willys-Overland and Ford. The two companies have more than enough capacity to fulfill initial and subsequent orders for the duration of World War II.

At the end of the war, over 647,000 Jeeps were built. Willys-Overland produced the majority of their MB Jeeps with over 361,000 total units, while Ford added another 278,000 of their GPW Jeeps top the effort. When it came to post-war production of military and civilian Jeeps, Willys-Overland would be the single source for these vehicles.

This is where the civilian story begins. Toledo, Ohio was booming throughout the war. Civilian Jeep production at Willys-Overland's plant continued the good times as returning veterans had their G.I. Bill ready to spend on a new home and a new vehicle. The American economy began to crawl from spoils of war with an appetite for anything new – vehicles included.

Willys-Overland produced some really compelling cars before the attack of Pearl Harbor in 1941. They could have resume postwar production of their car lineup but concentrated on capitalizing on the war hero/legend that was Jeep. Willys-Overland dealers began to sell the CJ, which looked like the MB Jeep but had a few creature comforts for postwar civilian life. However, the Jeep chassis began to grow and stretch to include some new variants that were more suitable for everyday life. The Wagon came in 1946, joined the by a pickup truck, and the Jeepster by 1948. The latter was the ultimate in civilian Jeeps with a convertible top and seating for four. This model only lasted until 1950.

Jeep customers wanted hard-working vehicles. The Jeepster did not fit in what Jeep customers wanted. The CJ, Truck, and Station Wagon had a solid following among rural customers, as well as those who live in mountainous areas. New suburban customers did consider these civilian Jeeps but wanted something less rugged. There were some inklings that postwar veterans and other American vehicle consumers would rather have something useful and car-based, such as a Ford or Chevrolet station wagon instead of a Jeep. Something that did not remind them of the conflict of the early-to-mid-1940s – and subsequent conflicts on the Korean peninsula.

Willys-Overland wanted to re-enter the car market with a smaller model called the Aero in 1952. Considering the climate of the industry and the sales war between Ford and General Motors, Willys-Overland’s Aero was simply too little, too late.

The Aero made Willys-Overland a target for acquisition, thanks to a poor balance sheet which made the company less apt to survive the 1950s. The Henry J. Kaiser Corporation’s automotive division was also in dire straits, thanks to the sales war of Detroit’s Top Two. Both companies merged where they were able to produce a combined car lineup, along with Jeep’s own vehicles. By 1955, Kaiser and Willys stopped producing cars and concentrated on Jeep production under the newly rechristened corporate name of Kaiser Jeep.

Under Kaiser’s corporate governance, Jeep began to mature while maintaining a rugged persona for its core customers. By 1963, we saw the first transition into the “modern” era with the arrival of the big Wagoneer. The new large platform would eventually replace the old Truck and Station Wagon with a more enclosed body and an enlarged cabin area for passengers and cargo. It retained the CJ’s four-wheel drive system as its primary selling point. The Wagoneer would be soon joined by a new pickup truck.

Jeep’s reputation gained not only a core following. It began to attract new competitors. International Harvester made pickup trucks for decades. Their trucks would be joined by the Scout, a competitor to the CJ, and the Travelall, which matched up with the Wagoneer. General Motors had been making the truck-based Suburban since the 1930s. Chevrolet and GMC would soon compete against the Wagoneer with a huge advantage. GM’s dealer network was much larger than Kaiser Jeep’s and International Harvester.

By 1966, Ford would join in the recreational vehicle market with their Bronco. The CJ competitor took after the International Scout with a semi-enclosed, squared-off body built from a smaller frame off of the F-Series pickup truck. If not the CJ-5, it would be the Bronco that would break the recreational market open. It would also enable GM to develop a shortened rival from the Suburban/C/K pickup frame – the Blazer. Chrysler’s rival would arrive in the early 1970s with the Dodge Ramcharger.

It is hard to imagine a time when Jeep was left behind for its rivals. Kaiser could not afford sales and fiscal losses in the late 1960s, as Jeep was losing ground to Ford and its other rivals. A lack of a dealership network in key markets did not help Jeep’s cause towards the end of the 1960s.

The solution came from American Motors. The last of the automotive independents had a decent turn in the late 1960s, thanks to their car lines. They saw Jeep as a compliment to that lineup. By 1970, Kaiser was relieved of Jeep and folded into AMC’s established supply and dealership networks. AMC gained Jeep’s Toledo production facilities and would soon create ways to implement efficiencies and component sharing between AMC’s Kenosha, Wisconsin plant and Toledo.

If one thing helped Jeep’s cause in the 1970s, it was AMC. Better advertising strategies and a larger dealer network saw a rise in Jeep’s profile and in actual unit sales. The lineup dated back to the 1960s, but AMC took a few liberties to further civilize each model to attract non-recreational customers. The Wagoneer became luxurious with a woodgrained version equipped with cut-pile carpeting and leather seating. My father had one – a 1981 Wagoneer Limited. I drove it once. It was fun. That is all I remember from it.

Meanwhile, AMC ran into its own fiscal issues. For a couple of decades, AMC had a partnership with Renault to sell their vehicles in Europe and other markets. That was the extent of the relationship with the French automaker until 1979, when Renault took a controlling stake in AMC. Over time, the French company began to plan for production of some of their vehicles at the Kenosha plant.

If there was one reason Renault wanted to take control of AMC, it would be Jeep. They saw plans of a smaller Jeep model that would transform the sports utility market worldwide. Plans for the XJ made it to the decision rooms of a combined Renault and AMC governing board. It was exactly what the world needed – a Jeep for the 1980s.

The result was a masterstroke in marketing that translated into massive sales worldwide. The XJ Cherokee and Wagoneer was built on a unibody platform – a first for Jeep – but provided the ruggedness you’d expect in a SUV from the same brand. It became a focal point of Jeep’s growth in the 1980s with its smaller size and competitive advantages against the Chevrolet S-10 Blazer, GMC S-15 Jimmy, Ford Bronco II, Nissan Pathfinder, Toyota 4Runner, and Mitsubishi Montero.

Sales for the XJ Cherokee sustained the Jeep side of the Renault-AMC business. It was sold – and built – around the world, including China. By 2001, the XJ Cherokee would wrap up production in Toledo. It would also be one of the primary reasons for another acquisition – the final one – to take place.

By 1987, Renault decided it was best to part ways in North America and concentrate on its European base and emerging markets. They found a suitor for AMC in Chrysler. Lee Iacocca’s leadership turned a company that was on the brink of oblivion into a money-making enterprise. One that dabbled in a few acquisitions and collaborations. AMC was its largest gamble, but for one reason only. Chrysler did not want to sell warmed-over Renaults and four-wheel-drive wagons that dated back to the Rambler American. Iacocca and Chrysler saw its largest equity in elevating Jeep further what Renault and AMC had done before the acquisition.

After the former Renault/AMC brand, called Eagle, folded for good, Jeep as integrated into Chrysler’s platform team strategy. All Jeep branded vehicles were part of a single group that included design, engineering, finance, and marketing that drove the brand’s success through three additional corporate transactions with Daimler-Benz, Cerberus Capital Management, and Fiat S.p.A.

For each suitor, they saw Jeep the same way Renault did at AMC. It was Chrysler’s shining asset based on sales and brand loyalty that sustained each acquisition and merger since 1987. If you wanted to see how Jeep has stood the test of time, look at what the brand has become since Sergio Marchionne and his Fiat team arrived in Auburn Hills.

Under Fiat Chrysler Automobiles, Jeep has truly become a global brand. Some have said that Jeep has a greater following than Fiat in many markets around the world. Part of it was the collaboration across the company that created a small vehicle platform that underpins the Renegade and the Fiat 500X – the former is now a popular little SUV worldwide.

Jeep has also become an influential player within the FCA structure. While the Alfa Romeo Stelvio and Maserati Levante were not spawned from a Jeep vehicle, their offerings would not be possible without the idea that derived from something the brand had done in decades past.

To many of its loyal enthusiasts, the Jeep we see today still has its roots back in combat in World War II. The vehicle that saved the world continues to thrive on the wave of global SUV dominance. Jeep continues to be the symbol of freedom and escapism no matter where one would roam.

As a marketing campaign once said: “There is only one Jeep.” As there should always be.