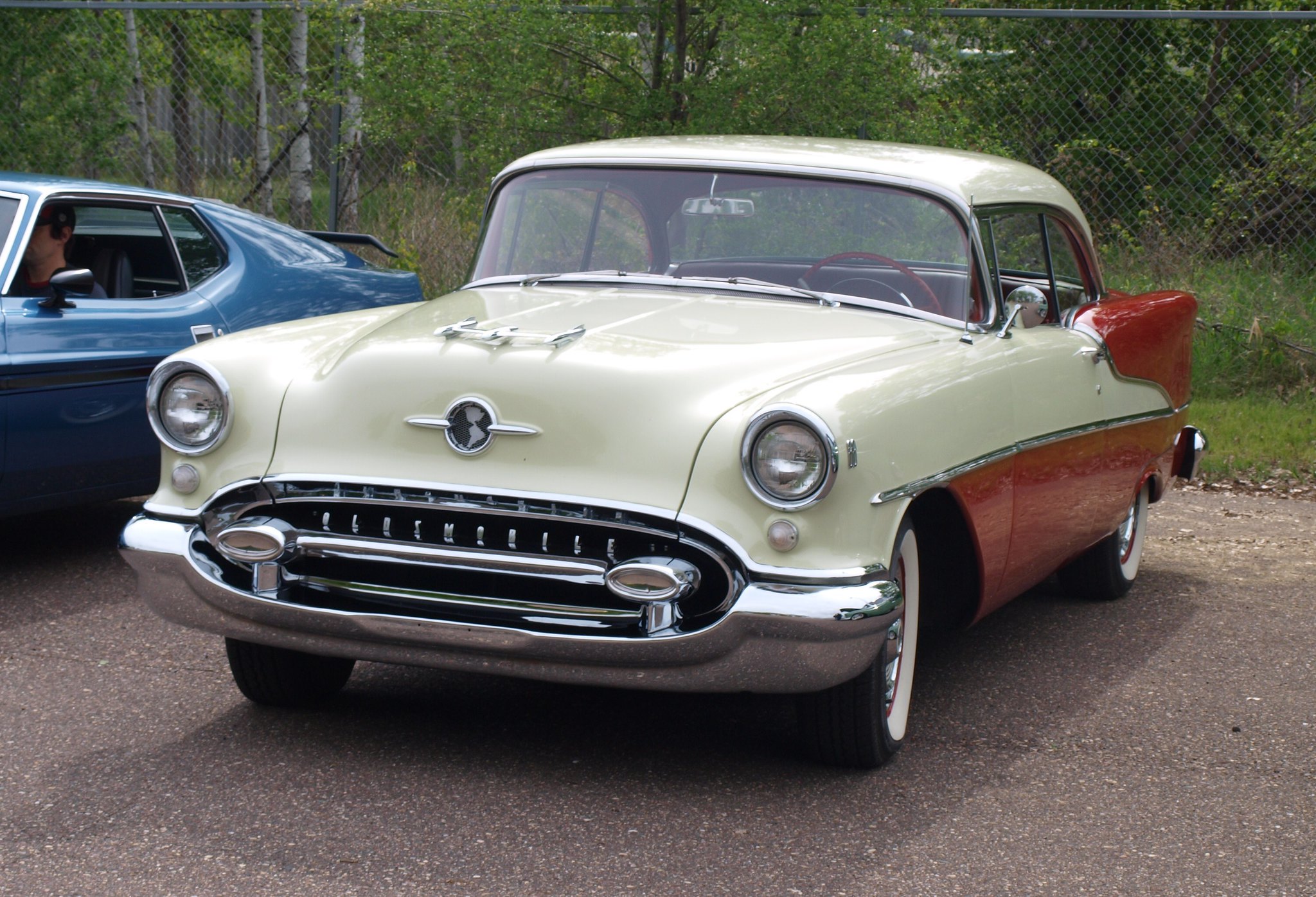 It sounds like a myth, but it is true: I was brought home from the hospital in my mother's 1955 Oldsmobile Ninety-Eight Starfire convertible.

A fact that would otherwise be trivial is an indicator of what my future would hold. Let alone a point of historical reference that denotes a heritage of car ownership. Perhaps it signifies brand and/or OEM loyalty.

This is true in the case of my mother's side of the family. My mother, grandmother and my uncle were part of a heritage of General Motors vehicle ownership.

Calling it a heritage of GM ownership may be vague, but understanding that my mom’s side of the family were not loyal to a singular brand. From my recollection and through stories from my family, two brands were prominent above all – Chevrolet and Oldsmobile. I could speculate as to why these two brands present the dominant paradigm amongst vehicles owned by the Stern/Bloom/Cohen side of the family. It was never asked to the reason why they were chosen.

The first mention of a GM vehicle owned by my family was a 1940 Oldsmobile owned by my grandfather Bloom. I believe they had it through World War II, since the next car mentioned by my mother was a 1950 Oldsmobile also of her parents. Clearly there is a pattern – mid-priced cars in supposedly middle-trim levels. Not too plain and not too fancy for their tastes. They just owned good solid automobiles.

The 1955 Ninety-Eight may seem like an indulgence on mom's part. The truth is that she bought it used in 1958. It was unclear what my father owned at the time or the impetus on getting a convertible for a family that never seem to like flashy things.

The Starfire was the top of the Oldsmobile range during a seminal year in its history. This was at a time when convertibles were competing against "hardtop" coupes and sedans – those lacking a B pillar. Oldsmobile only gave the drop top the name, as it designated the "hardtops" the name Holiday. Mom's was pretty special – white with a white and blue interior. Imagine being a baby brought home form the hospital in that car.

It may have come to a huge surprise to most that the car I remember the most from the infant/toddler/pre-school years was a drab live green 1960 Chevrolet Corvair. Despite Ralph Nader's literary destruction of what was a revolutionary car for GM, ours last from the day it left the showroom – bought new – ten years on. It was sold to a guy who turned it into a dune buggy. In-between, the Corvair serve as mom’s car to take my brother and I to school, to PTA meetings across the Los Angeles Unified School District and to get groceries from the nearby Von's.

The move to a bit more flashiness was evident on my father's part. A 1965 Plymouth Satellite was maybe a bit too flashy for us. That was traded in for a 1967 Chevrolet Impala sport coupe. Though she continued to drive the Corvair, it was evident that she loved the big white fastback coupe even more.

What fascinated me about the 1967 Chevrolet were its huge dials for the instrument binnacle. I doubt if today's automobiles would ever have such large instruments. Then again, the 1967 model was about boldness. Ours had the 327 cubic inch V8, which powered the Impala just fine. The blue vinyl interior was torture during the summer, but that remained the only drawback on a beautiful car.

My mother's side of the family preferred Chevrolets as far back as I recall. Partly it was due to my uncle who worked for two Chevrolet dealerships. He would provide grandmother Bloom her cars – a 1964 Chevrolet Bel Air sedan, a 1971 Bel Air sedan and a 1983 Cavalier wagon, from my own recollection. The latter car would be my grandmother’s last one, partly due to her inability to drive at her latter years. Perhaps it was the incident of backing her Cavalier wagon onto the carport of her mobile home should have been an indicator of that.

If one car would define my more formative years, it would be the one that would become my first ride – the 1972 Oldsmobile Ninety-Eight Luxury Sedan. My father first got the car through a business associate off a lease. With months of having the Olds in our possession, he left my mom. The Olds eventually came back my mom, along with the car note. At that point, everything changed.

We were active in the Scouting movement, so mom had the great idea to modify the Olds to better suit our activities. The rear end was raised to help balance the roads needed to access campsites and such. We already had the advantage of seating five scouts, including my brother and I. Five backpacks with attached sleeping bags also fit in the trunk of the Olds. Granted it was only rear-drive, you might say this was one of the few Oldsmobiles that went off-road in its time.

Mom would stop driving the Olds just after I began Reseda High School. She suffered her second stroke and was unable to gain feeling on her right side. I ended up with the big Olds after I got my license, but only on restriction by mom. She was a good parent by being pretty much by the book. Those restrictions loosened up during my senior year at Reseda.

The once mighty Rocket 455 V8 was already clogged with emissions control equipment, therefore not showing what it could do even when the throttle was pressed. The electrics always had issues, but we lived with it, even at its worst. When I began driving it regularly, I always something go wrong. The radiator would boil over in the summer. Tires would have to be replaced – and they were not cheap by 1982 standards. It died a cold death at a friend's house in 1983. The electrics gave out for the last time. It was later sold for salvage.

It was not just my mom's side of the family that owned GM cars. In 1977, my father bought his-and-her Buick Electra Limiteds with his second wife. It was in his creamy yellow Electra that I had my first taste of driving. Sadly, it was my father who told me to get his car out of a very tight parking spot in downtown San Francisco. I simply could not do it.

On another visit to see my father, I had my first drive in a Cadillac – a 1981 Fleetwood Brougham with the V8-6-4 engine. It belonged to his business partner, which would have indicated that I should have left it well alone. It was nothing wrong on my part – it was the nature of my relationship with my father after he left the house.

My GM story did not end with my family ties. I rented cars a lot from the age of 21. It was an expensive habit that kept me in the present mode of automobiles during each moment – and at almost every city I lived or traveled to. Driving a recent model car helped in frame what I do today.

Over the years, the majority of my rented cars were GMs. The first one was a 1985 Buick Century on the first front-drive A Body platform. It was a two-tone blue model with plenty of luxuries for the time. The A Body would be a seminal car for me as someone exploring the industry while in college. That said, the majority of rentals were Oldsmobile Cutlass Cieras – a personal choice, if by selection by the rental car company. It was a natural fit considering my first car – though I would never drive another Ninety-Eight since the 1972's death. Cutlasses suited me better, actually.

My last Ciera would be my last ride with my Mom. On Thanksgiving of 1991, I drove her down to my brother’s place to have what would be our family's final Thanksgiving. When transferring her into the rented Olds, I dropped her. Normally, she would be upset. We both laughed. It would be my final lasting memory of my Mom.

With every era, a GM car would be of my favor. In the early-to-mid 1990s, the Oldsmobile Cutlass Supreme sedan would supersede the Ciera. Towards the end of the decade, it was a mix of Chevrolet Luminas, Cavaliers, Pontiac Grand Ams and Oldsmobile Intrigues that would denote my time in the Washington, DC area.

The new Millennium saw changes that would be both beneficial and disappointing. As Oldsmobile closed it doors, I had to find a brand that would take its place in the present mode. Though the Pontiac Grand Am was around, I was grateful it changed over to the G6 by the time I moved to the Twin Cities.

When my automotive writing work started gaining traction, GM would be the second media fleet to provide me vehicles for review on here and in my two other outlets. The first one of these was a 2011 Buick Regal with the 2.0litre turbocharged engine. The subject itself was simply fantastic. Who knew it would become that year's Victory & Reseda Vehicle of The Year – and the first one presented live to the OEM.

Since then, I covered all four current brands at GM. They sent everything from the small Chevrolet Spark to the Silverado 2500HD pickup – all of which been written on this site. Yet, the one vehicle from GM that would show up more than any other – the GMC Terrain. One of them was supposed to be a Chevrolet Sonic, but I was ever so grateful it was. We had a snowstorm that occurred in the Terrain's second visit to V&R. The third one – a 2013 Denali – ended up having to traverse the Twin Cities' icy freeways after a nasty storm slammed through the area.

GM cars have seen use in various places in my life and career. There were epic road trips on Interstate 5 stretching from San Diego to Seattle in the 1990s. I discovered much of the Mid Atlantic region in several GM cars while living in the DC Area – from Virginia Beach to State College and up through Philadelphia. A Madison-Milwaukee-Grand Rapids-Lansing run was done courtesy of a 2002 Grand Am. Here in Minnesota, several GMs saw service in discovering parts of the Dakotas, with a run to Madison and Chicago thrown in.

What I have driven from GM is only part of this story. It is about heritage. This heritage is now combined with seeing today's GM in action. I would be remised by not mentioning the fact that I have seen the new CEO Mary Barra in action a couple of times, even in her previous seat in Global Product Development. Barra is simply one of the great people I had a chance to meet, interact and work with at GM – all in positive situations with resonate results.

My goal always is to cover this industry without bias or fandom. A GM car gets an equal shake, as would a Ford, a Chrysler, a Toyota, a Kia, a smart, or any other vehicle written about anywhere my words are published. However, there will always be reminders of the heritage I have through generations to this history with GM.

It is a heritage that will undoubtedly continue…