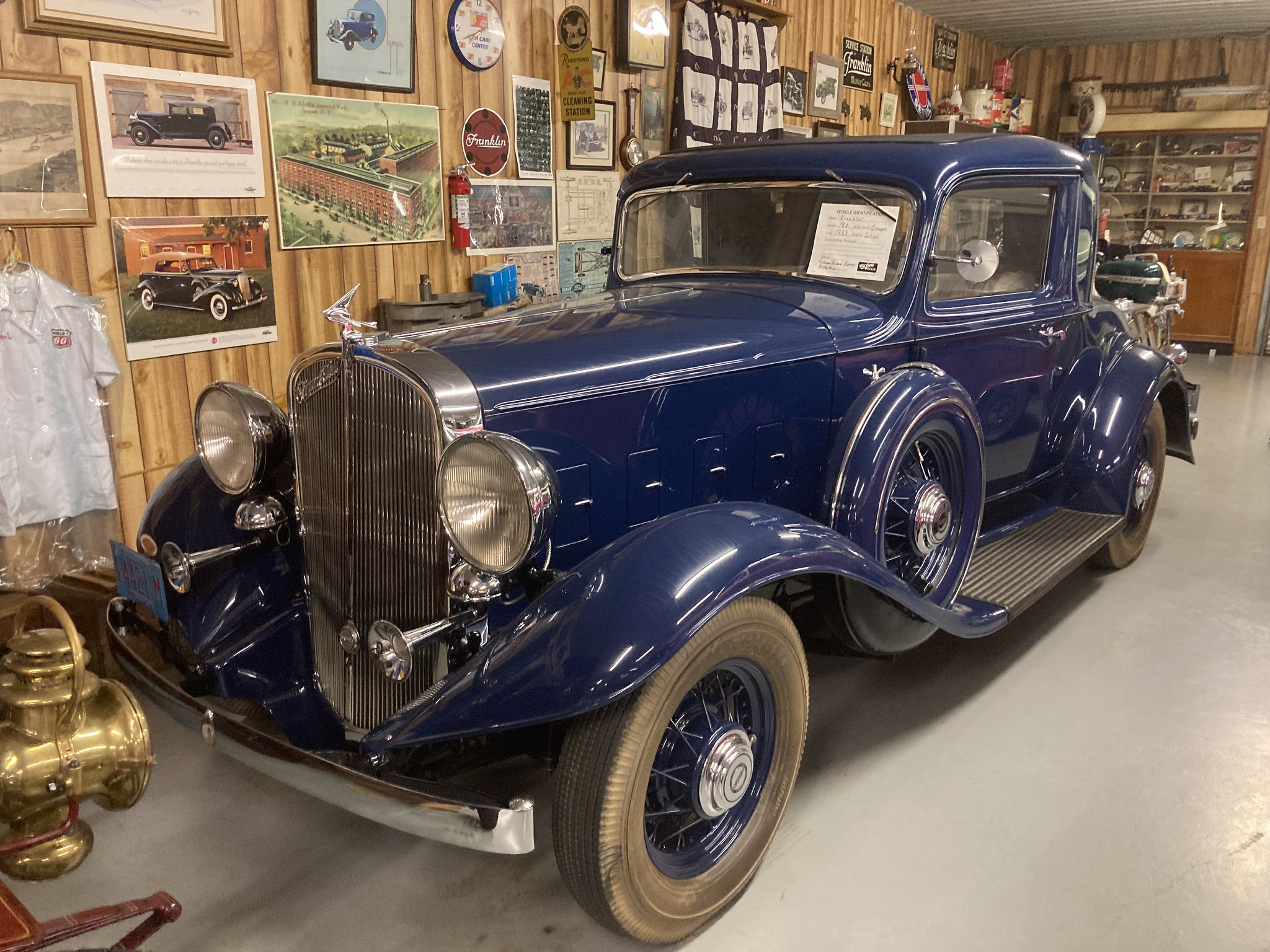 It was not until recently when I was reacquainted with the H. H. Franklin Manufacturing Company.

For the readers of this website, I could possibly assume that only a few of you have ever heard of the H. H. Franklin Manufacturing Company. Or, have associated the company’s name with the manufacturing of automobiles.

Let me admit something…I have completely forgotten about them.

You would think that someone who writes automotive history pieces on this platform would forget that such a manufacturer ever existed. Granted, the company started making automobiles in 1902 and would continue in to the 1930s. They were also innovative that some of their ideas continued well into the 1990s by other manufacturers.

It was not until recently when I was reacquainted with the H. H. Franklin Manufacturing Company.

On a drive event with the car club I am a board member of, we were tipped off of a private collection in Western Wisconsin. A friend of a couple of my fellow board members knew the family that had this collection. Their father recently passed away and we were invited to see what he had.

It turned out that this family had a collection of Franklin automobiles. A lot of them, from what I gathered. They were from practically every decade the company was in business. Granted, there were a few Studebakers and other manufacturers represented in these two storage buildings, but just everywhere you looked, there were these semi-familiar automobiles built by the Syracuse, New York manufacturer.

From what I also gathered through this visit to this private collection, there was a Franklin dealer in this small Wisconsin town along the Mississippi River. They also sold Studebakers at this garage. That explains why this owner bought so many Franklin automobiles.

A couple of days later, I started looking up several bits of information on the Franklin automobile. One such interesting fact was the way they were engineered.

Secondly, Franklins were known to be lighter in weight in comparison to other vehicles in its class. Earlier models had their frames made of angle iron, Franklin did use lighter steel and, eventually, aluminum components on their vehicles. In fact, they might have pioneered the use of aluminum to become the largest manufacturer in the world utilizing it.

Come to think of it, the Franklin could have been the Porsche 911 of their day. But, that’s a huge stretch of the imagination.

Instead, Franklin was a luxury car manufacturer. They were not priced accordingly, however. In 1904, they undercut Ford by a few hundred dollars. Not bad for an interestingly engineered automobile.

Let me spell out what a 1904 Franklin had to offer. They were powered by a transverse-mounted, vertical straight-four-cylinder engine putting out just 10 horsepower. You shifted gears through a two-speed planetary gear transmission. This, from a touring car with a detachable rear tonneau cover that weighted only 1,100 pounds.

In the early days of the automobile, there was no such thing as conventional engineering. These machines were dictated on whether they actually worked in the real world or not. That included battery-powered fully electric automobiles.

Franklin continued bucking automotive convention, even as Ford developed the Model T or eventual mass-production. Design-wise, they completely stood out. One commentator thought they looked like the Renault of that era. Most cars had upright hoods that connected to a prominent radiator grille. Franklin experimented with lower, angular or rounded hoods and radiator grilles that made them either less noticeable or quite sleek and unique for that era. You decide.

By 1920, Herbert H. Franklin’s company employed 3,210 employees in Syracuse. Not as many as Henry Ford or General Motors, but enough to keep the factory humming with these distinctive air-cooled luxury cars. However, Franklin’s distinctive looks received some feedback towards creating a “conventional” design for them to compete with other manufacturers. It ran counter to the innovations Herbert H. Franklin was promoting to the motoring public.

By 1925, a more conventional looking Franklin was introduced. To disguise the air-cooled system, designers put up a nickel-plated dummy radiator to show to dealers that you can sell a “conventional-looking” car. The “hoodfront” did attract customers to Franklin, which in turned paid a dividend that year. It was the only year the company was able to do so.

Like most automotive companies that were established at the turn of the 20th Century, the stock market crash of 1929 struck right at Franklin’s financial heart. It was on the cusp of introducing an all-new engine to its customers. That engine put out 100 horsepower, which was a benchmark for performance of the era. What made this engine significant was the car’s power-to-weight ratio, which was the lowest of any vehicle in its class for the time.

Franklin seemed to be losing ground to the luxury car leaders of the era. Cadillac and Packard ruled the segment in the USA. Duesenberg, Auburn, Cord, Pierce-Arrow, and Marmon continued to attract well-heeled clientele who avoided major losses from the crash of Wall Street in 1929. By 1932, it was clear that most of these manufacturers were not going to last through the Great Depression. Among them would be Franklin.

It was not for one last effort. In 1932, Franklin felt that they needed to compete head-on with Cadillac and Packard with its own air-cooled 6.5-liter twelve-cylinder engine. While it was rated at 150 horsepower, it was no longer mounted onto a lightweight frame. In fact, the twelve-cylinder Franklin weighed in at 6.000 pounds – about the same weight as a Lexus LX 570.

The result of this new twelve-cylinder car was a lack of refinement compared to earlier Franklin cars. The ride quality was not as good as engineered expected. Not to mention that Franklin management did not accept this new car. It did not help that the company’s new management team were sent in by the banks to recover bad loans the company took out to survive. Let alone develop such as car that was beyond their scope.

By 1934, the company went into bankruptcy. Car production ended at Franklin.

However, their innovative air-cooled engines survived the end of car production. They would be installed in commercial and military aircraft under a new company in Syracuse. After World War II, the company was eventually bought by Preston Tucker. The flat-six-cylinder engines were converted with water jackets for the cooling system onto the 1948 Tucker. When his company went under, it was bought again to build the Franklin engines for aircraft use. In 1975, the last company producing Franklin engines went into bankruptcy. The design of these engines are still in production in Poland.

Franklin built innovative vehicles into the 1930s. They did so by using crafted methods, aluminum components, and complete in-house engineering and manufacture.

If one criticism was levied against Franklin was in the way they sold their vehicles. In the luxury segment, you needed a showroom and facilities that were the envy of any real estate developer. Grand facades and building with large windows showing off their elegant wares. Cadillac and Packard benchmarked luxury car retailing in the 1920s and beyond.

In contrast, buying a Franklin meant going to a humbler and more subdued dealership. Sometimes, a garage would sell these luxurious cars alongside smaller nameplates, including Studebaker in the case of the Franklin cars in that private collection I saw recently in Western Wisconsin.

A note to anyone who may encounter a vehicle that might not ring a bell to you. Ask questions. Do your research. And, find a way to celebrate it.