We love and hate car dealers.

We love them, since they spark our dreams. That old car in the garage racked up plenty of miles and repair bills. When it becomes apparent that it needs to be replaced, the first place we look is at a car dealership. Perhaps something on that lot would pique our interest. Perhaps not.

Once we fixate on that replacement vehicle, the fun begins. The automotive retailing process spawns one of the most time consuming and difficult consumer transactions known to the universe. Yet, it is one of the variable transactions one can go through – if the process is simplified by the consumer.

Automotive retail is a lucrative business.

The car dealer business started in 1897 by a gentleman named William E. Metzger. His Detroit showroom sold Waverley electric cars, at first. Then, he added steam-powered automobiles to his showroom before becoming an Oldsmobile dealership in 1899. Since then, the showroom was designed to create a space where the customer could look over the vehicle, consider the possibilities of ownership and make a transaction.

Considering that once a customer buys a new vehicle, it has to be maintained or fixed. The garage business came about the same time as sales showrooms. Mechanics usually have one car to work on at a time, since the automobile was a relatively new thing at the time. Unlike a clean showroom, the garage or repair shop was dirty, full of clutter, parts, tools, and rags.

At the dawn of the automobile, these two elements would undertake an evolution towards what we see today. Of course, we are talking a century or more of progress. It would take a new approach to building the automobile to develop a new way of distribution and resale of these conveyances.

Ford’s assembly line production method opened up to a quandary. One could think that every Model T could be built at River Rouge and be distributed by rail to all corners of the 48 states. Demand for the Model T would easily outstrip supply from a singular plant. Regional assembly plants would be one answer to cut distribution to dealerships and improve turnaround times for vehicles to be sold. Though Ford simplified this process, its rivals were still playing with variable forms of distribution and retailing of their wares.

Showrooms came in various varieties prior to World War II. Most likely, city dealerships were positioned along main streets. It was as you were window shopping for a new car, like you would a bicycle or clothing. Some showrooms were more equal than others. The window shopper would see that instantly as to how prestigious an automobile is to the design of the showroom itself.

A prime example of this would be not far from your home. In Santa Monica, California, visit the Lexus dealership. It would take you back to the 1920s and 1930s with its huge showroom space full of period design. The feeling was an opulent as if it was a Cadillac or Packard dealership some 80 or 90 years before. The wood, stucco, plaster and flooring takes you back to the days when the finest automobiles once sat where a more modern LS 460 or RX 350 F Sport is taking floor space.

The architecture of a dealership usually dictates the kind of vehicle being sold there. In the 1920s and 1930s, you would expect a Chevrolet or Studebaker dealership to be more straightforward and business-like. You might even see more gimmicky motifs seen as stereotypical of budget-class brands. If you saw signs of advanced Art Deco or Romanesque columns and fixtures, you might be in a Lincoln or Pierce-Arrow showroom. Somewhere in the middle is a Buick or De Soto showroom. They might not fancy, but they do fit the atmosphere of its customers – professionals that demand no gimmicks, but good service.

Once you drive away from the urban centers, you come across the rural dealership. They can range from a gas station with a stock of a few cars where the owner sells the cars to a small showroom that can fit two units with a few offices for their staff. Rural customers want a mix of vehicles – trucks, as well as cars. For Ford, General Motors, Chrysler, Studebaker, Hudson and International Harvester – this meant good business to attract the farmer. Most likely in smaller communities, it would be a Ford, GM and a Chrysler dealer in town. Sales locations for smaller makes and brands were few and far in-between.

The spoils of victory in World War II was an uptick in the national economy. The G.I. Bill enabled many Americans to buy homes, go to college and increase their consumerism in an emerging modern age. The automobile was changing, too. So were dealerships. 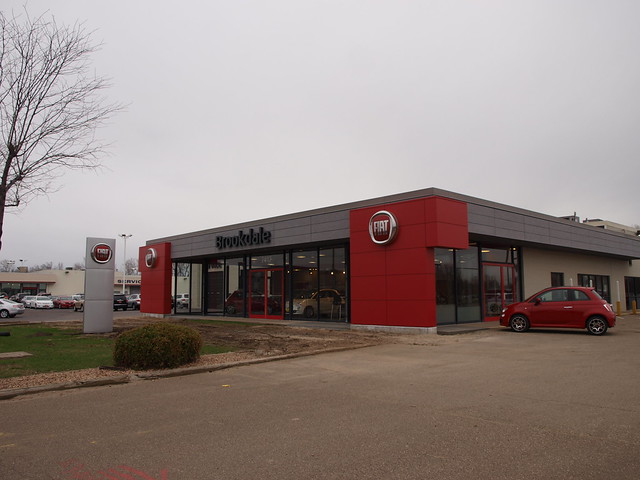 A dealership in Brooklyn Park, Minnesota – no longer in operation

To meet the change in population migration towards the suburbs, a different kind of dealership was being developed. The modern showroom took on modern architectural tenets of simplicity, increased use of glass and the expanse of available property for a cleaner, larger service area, parts inventory and space for both new and used inventory.

The modern dealership meant employing new positions. The finance department would grow in the face of increased credit availability and competition among financial institutions for lending. While showrooms grew, there seemed to be less of a distinction between brands and price classes when seen next to each other. Granted, a Cadillac dealer was a grander property than a Chevrolet one. Still, a drive along the "car dealer row" might make one wonder if there was a difference between a Ford and a Chrysler-Plymouth-De Soto-Imperial showroom.

Dealerships also served as the front lines of a larger Postwar battle – the Price War of the early 1950s. With so much competition available, dealerships of the biggest two manufacturers were given leverage to price down their cars to get more sales. Cash was thrown on each hood to grab to get more customers through the door. Television helped in opening up local advertising to entice new customers onto their lots and showrooms.

While Ford and GM enjoyed huge showroom traffic and volume sales, it was at the bane of their competitors down the street. The mergers of 1954 – Hudson and Nash as American Motors, along with Studebaker and Packard – began the consolidation of the automotive retailing business. The Recession of 1958 saw more attrition, claiming De Soto and Edsel as eventual victims by the arrival of John F. Kennedy at the White House.

Slowly through the 1960s, former dealerships of long gone brands would pick up new tenants. The foreign car market began to grow, with Volkswagen in the lead. A Volkswagen showroom did not need much in space and property, even though they sold in strong numbers year after year. The original Beetle were a fraction of the size of a popular large car, which meant inventory storage could be maximized by volume. This was the prevailing thought when other popular brands, such as Renault, MG and Fiat, began looking for retail space.

Some foreign car dealerships hosted multiple brands. For example, the British Motor Corporation would house at least four brands – Austin, Morris, MG and Austin-Healey – at their showrooms. When British Leyland was formed later on, it would be a showcase of almost every British brand save for Rolls-Royce, Bentley, Aston Martin, Jensen, Lotus and so forth. BL dealerships in the USA could sell you a MG Midget, a Triumph Spitfire, a Jaguar, a Rover 3500 V8, an Austin America or a Land Rover if you so choose.

Some dealerships combined other brands, such as Saab, Renault, Peugeot and Lotus – unrelated manufacturers in a specialized European car dealership. Porsche showrooms began selling Audis, despite the other link between the two was the Piech-Porsche family. They would become the leader in premium brand retailing under the banner of Porsche + Audi.

The growth in foreign cars ushered in the arrival of the Japanese brands. As old American brands leave old showroom spaces, opportunities opened up for the likes of Toyota and Nissan/Datsun to take residency in these old spaces. In the 1970s, we saw the proliferation of these two companies on suburban auto rows and malls – along with other Japanese rivals. New signs popped up for Honda, Mazda and Subaru. The 1980s also ushered in more new names – Isuzu, Mitsubishi, Suzuki, Hyundai and Yugo.

The modern showroom became an expanded place where the transaction was to be comfortable and painless – somewhat. Because there is an emphasis on customer satisfaction in the automotive retail business, including added value points for service, the development of the modern showroom is to meet the needs of today’s connected consumers.

Whether this is a good thing or not is not for debate here. What is up for discussion is to ponder the way things used to be. As with today, the automobile dealership was a destination. When the new model year was launched, it was a place of celebration. Salespeople knew they had to sell any remaining stock of the outgoing model year, but was willing to show customers the differences between them and the new models. The kids were given scale models of the new cars, while adults kicked tires and pointed out the changes on each vehicle. Freshly printed brochures were handed out like holiday gifts for their prospective and loyal customers to peruse – and dream. 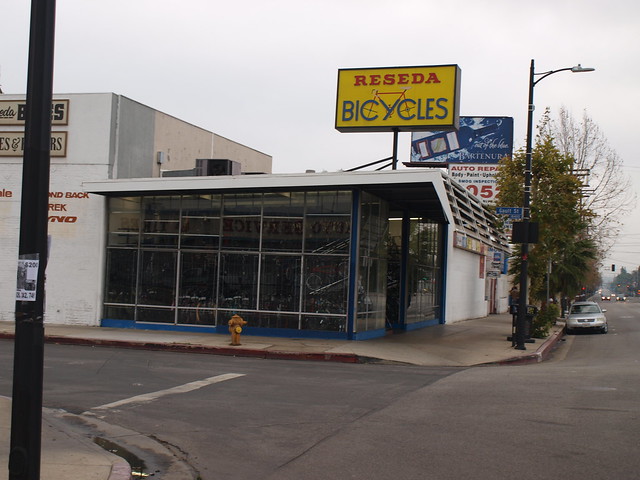 From my own recollections, they were indeed places that instill dreams. Along Reseda Boulevard were seven dealerships, plus an additional one a block off on Vanowen Street. They represented Dodge, Chrysler, Plymouth, Imperial, Volkswagen, British Leyland, Chevrolet, Ford, American Motors and Honda. There was also a Buick dealership on Sherman Way. San Fernando Valley residents had dozens of places to buy their vehicles – stretching from downtown San Fernando to Ventura Boulevard in Woodland Hills. Aside from Reseda Boulevard, rows of car dealerships were established on Van Nuys Boulevard, Lankershim Boulevard, parts of Ventura Bouelvard and on Roscoe Boulevard in Canoga Park.

These were part of the Postwar phase of the auto dealership with suburban designs, despite some fronting on the street with huge windows for passer-bys to look inside. Many have come and go over the years, but one had to look at the San Fernando Valley to see where the currents of automotive retail transpired.

By the 1970s, auto malls sprung up out of far flung suburbs. In my case, they were in Thousand Oaks, Valencia (now Santa Clarita), Irvine, Tustin, Cerritos and so forth. These were developed to cluster auto dealerships together for better convenience to the customer. It is possible to look at every car, truck or SUV in a particular class within a confined place. San Francisco did one better with the development of the Autocenter – a place where they housed a half-dozen dealerships under one roof. Instead of blocks, a customer would walk a few feet to see another brand’s offerings to compare against another.

I found dealerships fascinating. Heck, I tried my hand at auto sales for a few weeks. It was at a Toyota dealership in Bremerton, Washington. I never sold one unit. Yes, auto sales is harder than you think.

This is why I am glad to have you as a part of the readership – people who work in automotive retail. You range from CEOs, General Managers, Sales Managers, consultants, advertising and marketing, Finance and Insurance, sales, service, parts, detailers, back office support…you name it! You keep the dreams of consumers going. You engage with enthusiasts. You keep everyone on the road, when their vehicle is broken. You find the right part for them to continue the work on keeping up their vehicle.

You also keep the local economy going. That is the most important part of this business – whether they love you or not.

However, I will always remember the way it used to be. A dealership was where dreams did come true. They still do today.