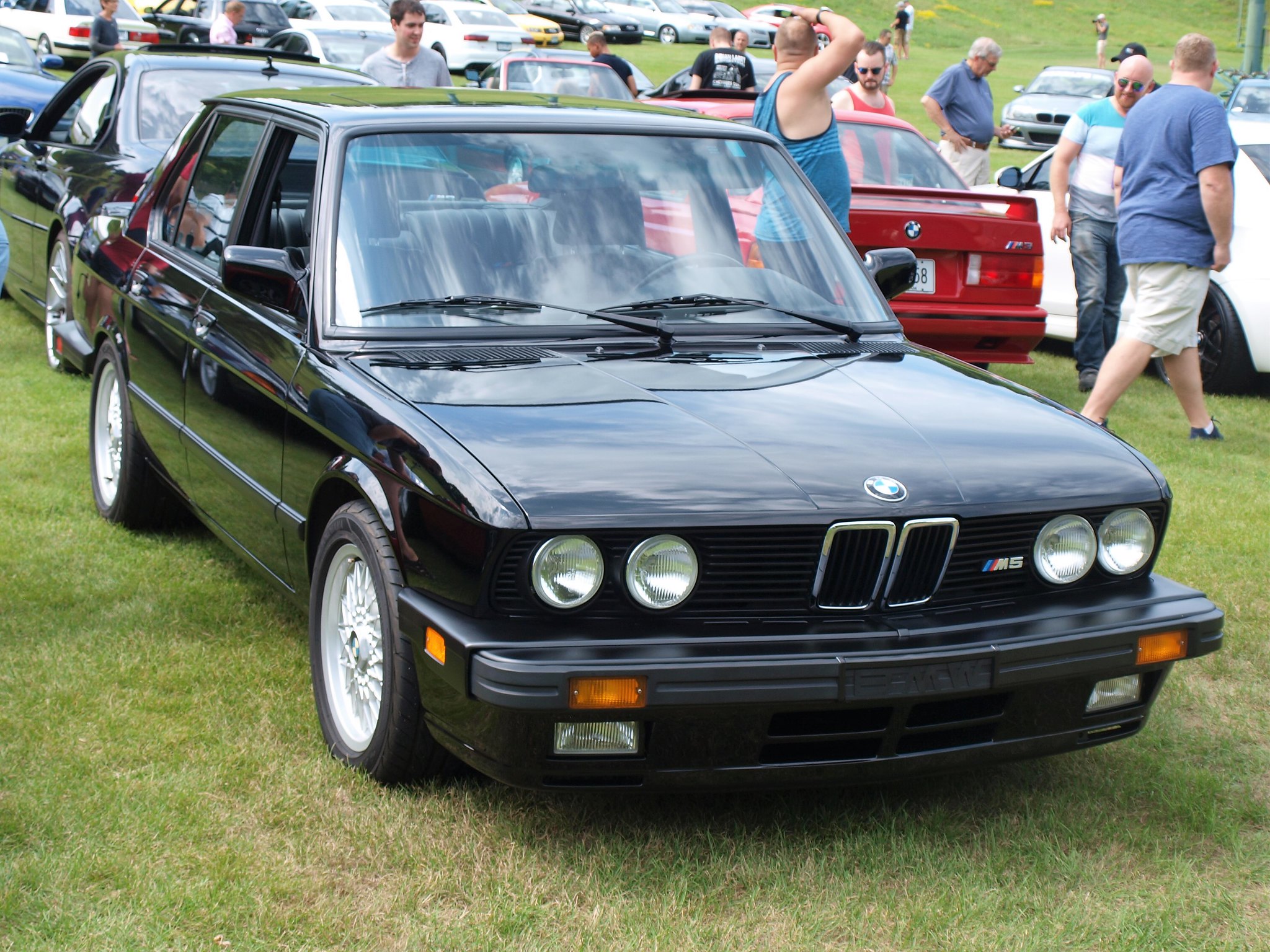 The M5's legend began with the E28 5er. Before we get there, a bit of background on how BMW's faithful became obsessed with the most glamorous of beasts.

Imagine a world without the M5.

Shocking, isn't it? It is because we can't. BMW's M5 changed the way we saw the performance sedan. A few add ons and some hand-made tweaking by the Motorsport team took a straightforward midsized luxury sedan and made it into the most feared vehicle with four doors.

The M5's legend began with the E28 5er. Before we get there, a bit of background on how BMW's faithful became obsessed with the most glamorous of beasts.

In North America, we knew BMW by one model: The 2002. That was at the dawning of the Age of Aquarius – the late 1960s. Enthusiasts could not get enough of BMW's small two-door sedan as the lunar module landed on the moon. The 2002 was quick – a benchmark for a similarly sized Japanese sedan to gun for. In and around the Sports Car Club of America's circles, we could not get enough of the epic rivalry between the BMW 2002 and the Datsun 510.

The 2002 was a byproduct of a new America. This was a country that balanced the eco-reactionary Nixon years with the want of being Nouveau Riche. It gave enclaves such as Encino, Sausalito, Edina, Lake Bluff, McLean, Buckhead and so forth something sprinty to run around in.

Little did we forget how serious the 2002 was. It may be all fun and games, but the 2002 made its presence on the track. Places such as Road America, Lime Rock, Sears Point and Road Atlanta saw how the 2002 sliced and diced the apexes and commanded the straights. However, the Bavarian Motor Works had other serious machines to offer the most discriminating buyer. The 3.0 CSL was a gorgeous coupe. Then, there was the Bavaria – while on the first 5-Series platform (E12) was distinctly luxurious enough to draw Cadillac, Lincoln and Mercedes owners over the Roundel.

At the dawn of the 1980s, BMW sold more than enough 3-Series to offset the steadiness of the new 7-Series flagship. The 6-Series coupe was the perfect transport for the professional that loves to fly solo – literally. They sold a lot of these desirable coupes.

After the Bavaria, the 5-Series was seen as the perfect driver's sedan of the time. The 5-Series challenged luxury car buyers and enthusiasts alike to not just enjoy a premium five-seat sedan. Owners found the first 5ers to be just as fun as the 2002. By the end of the 1970s, enthusiasts preferred the 5er to the Mercedes-Benz W123 and the Audi 100/5000 in its class.

How does one create a sequel to the E12 5er? Throughout automotive history, we've seen sequels fall flat on their back. We've also seen sequels create their own history sending its original predecessor into the dusty shelves of history – forgotten forever.

The challenge for BMW was to create a sequel to the original 5er by elevating the experience already established by the previous model. BMW decided to design more luxury onto its familiar shape – inverted front and rear ends and simple roofline – while upping the ante on its driving dynamics.

When the E28 arrived in North America, all we saw was a prettier version of the 5er. Chrome surrounded its taillights out back while the twin kidney grilles were given a squared-off treatment. Many of the previous model's lines were cleaned up while BMW gave it some beefier alloys and tires. Inside received the same treatment mixing luxury with enthusiast elements. One would consider the E28 even more luxurious than Merc's W123 – an achievement only reserved for its big 6- and 7-Series flagships.

Everything seemed fine for the E28 – until North American consumers opened up the hood. BMW thought it would introduce their lean-burn engines to North America to placate a slew of environmental regulations forthcoming by the USA government. Under the hood of the first E28s was a 2.7-liter ETA straight-six. The ETA engine was derived from a smaller six-cylinder block – the M20 – with the added feature of a camshaft that worked better at low RPMs to maximize engine and fuel efficiency. The result was a 121-horsepower mill that lacked the teeth expected in a BMW. The net loss between the 1981 528i and the 1982 528e was 48 horsepower and while the new engine gained only one pound-foot of torque.

Was it a mistake to put in an engine that had 48 horsepower less than the outgoing model? BMW owners expected high performance from its products – regardless of series.

Before the E28 hit the showrooms, North American enthusiasts savored a couple of high performance models in the E12 series that we could not get. Though BMW North America sold the pre-ETA 2.8-liter six, larger sixes were available. One such model was the 533i – a Europe-only model designed for the enthusiast that debuted in 1979. Then, the Motorsports division decided to up the ante on the 3.3litre six with a specially tuned model that was given a whole host of suspension, steering and brake modifications – the M533i. Before there was a M5 – this three-model year run delivered a luxury sports sedan unlike any BMW has ever sold.

One could go through the Gray Market to get an M533i. The Reagan Administration made sure you could – with a few words of warning. BMW's offices in Montvale, New Jersey would rather if you did not get such a beast. Gray Market cars were great to acquire, but don’t even dare drive up to a dealer's service reception in one. The best answer you would get from a service advisor is "no."

BMW North America knew it had to do something to thwart the supply of hot 5ers in the USA and Canada. The staff in Montvale decided to introduce the 533i for the 1983 model year. A 3.2-liter M30 six lurked underneath the hood packing 181 horsepower – more than the 1981 528i. The engine was familiar as it powered the 6-Series coupe in North America. The result was staggering – the fastest sedan in the BMW lineup sold in the USA and Canada of its time.

The E28's life in North America was one that enjoyed varying degrees of breakthroughs for BMW. In 1985, the first turbocharged diesel sold in North America was dropped into the 524td. ABS was introduced in 1985 across the 5-Series range, as were other luxuries we now take for granted. Soon, the 533i's engine got an increase to 3.4-liters – hence the 535i debuted with only a horsepower's increase at the top end.

Even more significant was one special 5er that was introduced in its final year of sale in North America. This one would cement the 5-Series as a vehicle to be feared by its competitors – a benchmark for its class. In 1988, a limited number of M5s arrived stateside to finally put an end to the Gray Market on BMWs. Bored out to 3.5-liters in displacement and a dual overhead camshaft design with four-valves-per-cylinder, the S38-powered M5 packed 256 horsepower underneath its hood. Aside from the M6 coupe, the M5 became the most desirable BMW in the lineup for perpetuity. Every M5 from that point was given absolute reverence above all of the Roundel's offerings by the brand's faithful.

It may be difficult to explain to the BMW faithful that sometimes the folks in Munich and Montvale may have made a mistake with the ETA-powered 5er for 1982. I would not call it a mistake, but, rather a miscalculation based on customer feedback during its first model year. The ETA engine did remain as a starting point for the E28 in North America, a choice for those looking for an efficient BMW with room for a family. Serious BMW owners found a home in the 533i/535i and ensured its place in the segment with its staggering performance. A true Roundel driver would choose the larger engine over the ETA.

On a cultural level – California being my point of reference – the E28 5er gained traction as a status symbol for the upwardly mobile. While some aspired for the 3-Series in the midst of the Reagan era, others felt that the 5er was to be acquired and cherished above any luxury/premium automobile. You could go higher – a Mercedes-Benz S-Class, for example – but, what would be the justification? An S-Class did not have the moves like a 5er. The lighter, smaller and more sure-footed E28 spoke more about the 1980s than any German luxury car sold on this side of the Atlantic.

This is also spoken through personal experience. I once owned a 1985 Audi 5000S briefly – a semi-basket case in terms of interior items mainly. It ran very well until the power steering pump imploded. Then again, the car was eight years old. The Audi was a lesson in terms how luxury was executed back then. If one compared the 5000S to the 5er, the Audi had some ways to go to meet the combination of luxury and performance the E28 exhibited for the time.

Even from the standpoint of an early miscalculation, the E28 put the 5-Series permanently on the premium/luxury car map. It became the benchmark for the segment when one was needed. While Mercedes-Benz played catch-up, BMW moved the bar further in terms of performance. The E28 5er spoke to the enthusiast like no other family-sized sedan had ever before.

That is a legacy BMW has enjoyed for the past 40 years.