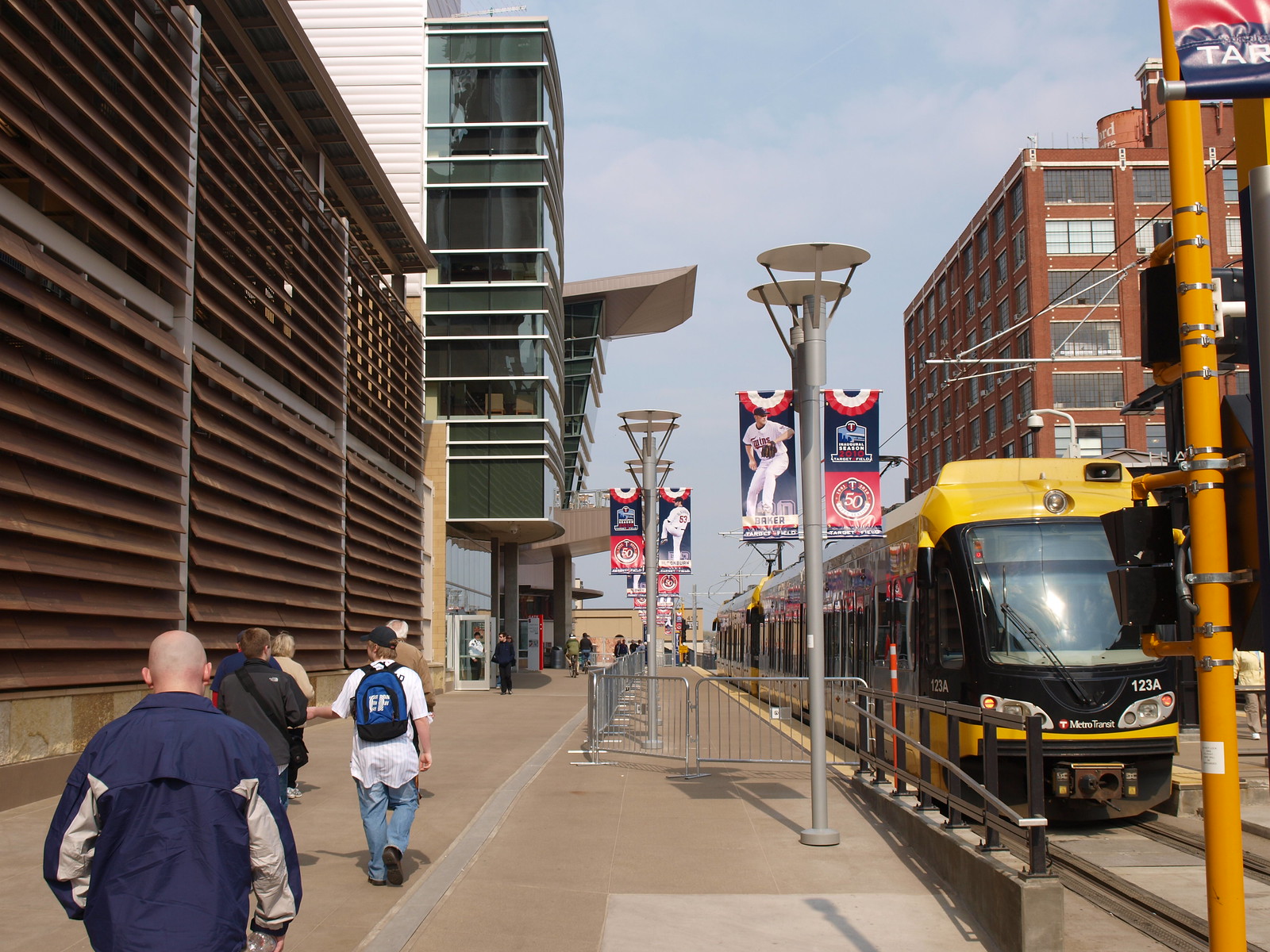 This post was originally published on The Heirloom on May 16, 2008. It has been reposted updated on here to reflect a very special occasion later this evening. Enjoy…

How many cities can you name where you can glide to the ballpark on public transport without worry of fuel prices and parking fees? Certainly the fans in New York, Boston, Chicago and Philadelphia can attest to the convenience of public transit to the ballpark, but you'd be surprised where else you can leave the car behind and take another way to see your favorite team.

Normally, I commute by public transit to work and back as a hedge against the rise in petroleum prices. On top of that, I utilize the convenience of our Metro Transit system to get to Target Field to feed my baseball addiction.

We are pretty spoiled having our light rail drop right at Target Field. It makes life easy…unless the trains are packed. That's another story entirely.

When I was younger and living in Los Angeles, the RTD offered a special bus from downtown Los Angeles to Dodger Stadium. That meant for the local transit agency to use the oldest buses in their fleet for those who chose not to drive to the park. When it was hot and smoggy, these buses lacked air conditioning…and we're talking the early 1980's!

Right now, the RTD's successor, Metro, offers the popular bus link from Union Station in downtown Los Angeles to the ballpark. It gives fans a comfortable, air-conditioned and green link from the city's rail system to Chavez Ravine. Things have certainly changed in L.A.!

Going from Southern California to the Bay Area was a Godsend! A's fans know that BART is the best way to the McAfee Coliseum. However, in my day, the Giants played down at Candlestick and MUNI can get you there by bus. With AT&T Park in full swing, I was glad to see that the city linked the MUNI Metro light rail right to the ballpark's front gate.

Right now, you can feasibly take some sort of public transit to 28 out of 30 Major League ballparks (except for Kaufmann Stadium and the Rangers Ballpark at Arlington). Luckily, a huge majority of these ballparks are now built in or near the center of a city where transportation is plentiful. A few cases show some improvisation on some part to ensure they get to the ballpark before the first pitch even as they transfer a few times across town.

If you're the math, you may have found something interesting. If I took a family of four from the Minneapolis suburb of Burnsville and compare a drive in an average family sedan to Target Field against driving up to the 28th Avenue Station Park-N-Ride near the Mall of America and using the light rail line to the ballpark, a single trip would end up a wash between the two options. That is if I took out the cost of wear and tear on the vehicle, then transit would have the advantage cost-wise.

If I did the same comparison in Major League cities where the price of fuel is higher, the driving distances are longer for suburban fans and the cost of parking is higher, I can certainly see why it makes more sense to take transit to the ballpark. Even with transit, there are cost cutting items you can do to gain a further hedge on fuel costs. Day passes or round-trip tickets save some money.

You can also add more value by making it a day with some local dining nearby the ballpark in various places and doing some pre-game shopping or milling around if there's ballpark or team-sanctioned activity around the ballpark prior to the first pitch. Think Yawkey Way outside of Fenway Park…and many other ballparks that are trying to add some of that flavor outside of their walls.

I know that there is a perception that taking public transit will expose you to perceived dangers and your safety and security would be compromised. Consider this thought: When you think of "safety by numbers," consider the fellowship of the fans on board a bus or rail vehicle. A subway car or bus full of the same people who shared the same experience you did is part of the culture that is baseball.

Hopefully, by taking public transit to the ballgame will help evade your fears of the rise in gas prices. If you simply leave the car at home, or drop it off at a free Park-N-Ride lot en route to the ballpark, you can feel some extra comfort knowing that you can afford to make your game experience a "greener" one. Well…unless you drive a Nissan Leaf…