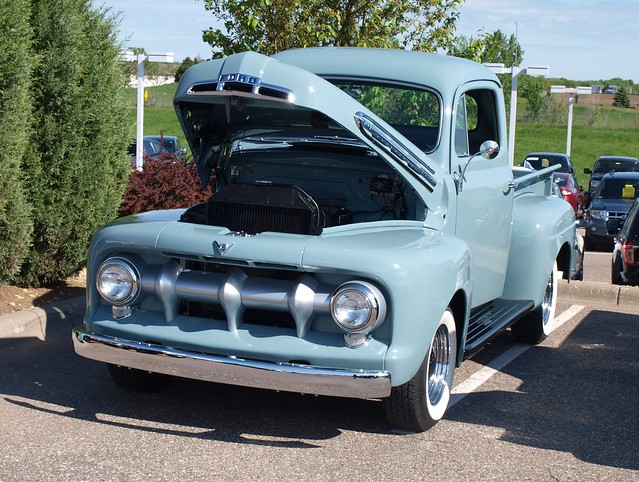 There are currently six full-sized half-ton pickups to choose from in the U.S.A.

I know, big deal! However, please understand why this topic is important. By volume, the pickup truck is the backbone of the Automotive Industry in North America. They offer the highest yield of revenue and profit of any vehicle built for sale in this country. They also serve a purpose as the main mode of transport to keep this country’s economy going.

There is a lot riding on the full-sized half-ton pickup. There are construction companies that rely on pickup trucks for jobsite transfers. There are farms that need them as a lifeline towards crop development and cultivation. There are those who buy them to tow their toys up to the lake and back.

With five manufacturers, making six distinct lines – mostly right here in the U.S.A. – you could ask which one is best. Obviously, I was unable to get all six models at the same time to do a fair comparison. Instead, I reviewed my notes from each model from the five manufacturers of pickup trucks to actually see where they stand out in terms of competencies. 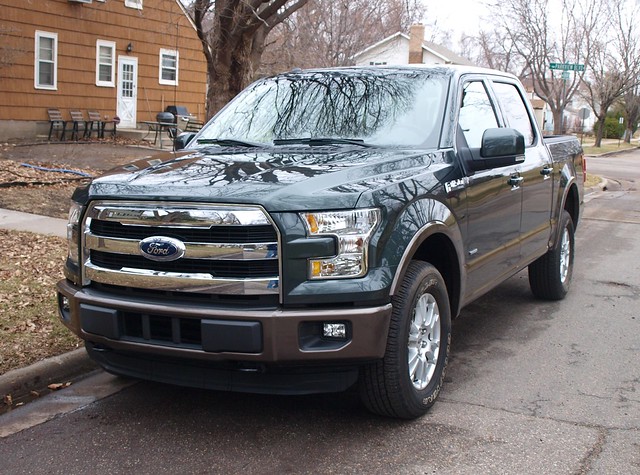 The cabin offers a lot of space inside, especially in the rear seat of the SuperCrew. Front seats are large and they face the best information screen in this class. However, the steering wheel does cover up some dials in the process. The new addition of SYNC3, along with Ford’s connected apps and Apple CarPlay/Android Auto connection help make the F-150 more informative. 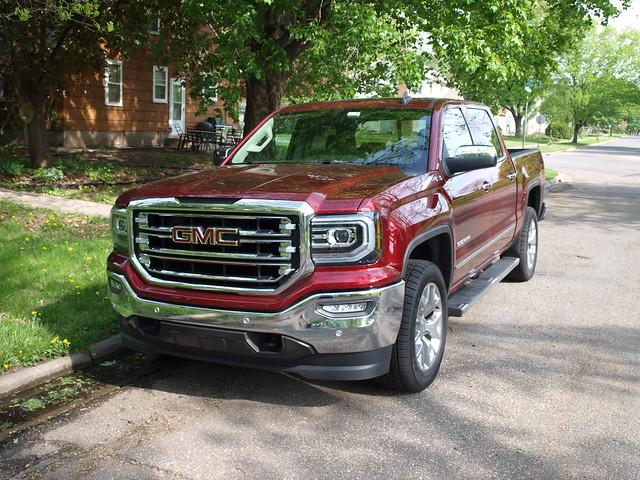 GMC SIERRA: Both the Chevrolet Silverado and GMC Sierra were updated for 2016. For this update, I received two of the GMCs – a SLT Crew Cab with the 5.3 liter EcoTec3 V8 and a Denali Crew Cab with the 6.2 liter EcoTec3 engine. There was an interesting twist to these two vehicles. The Denali, with the bigger engine, turned in the best fuel economy among gas-fueled pickups with over 19 MPG. The 5.3 liter V8 was no slouch, turning over 17 MPG while delivering smooth power.

Cabin size for the Crew Cab was average, with decent rear seat room and comfortable front seats. Instrumentation offer two medium-sized dials and four gauges. The information screen is smaller than the one in the Ford and Ram, but it offers a lot of screens for various functions. The use of GMC's IntelliLink is decent, but it is buoyed by OnStar, its RemoteLink app and the onboard 4G LTE Wi-Fi connection – plus Apple CarPlay and Android Auto. This makes the Sierra the most connected pickup in the business – next to the Chevrolet Silverado. 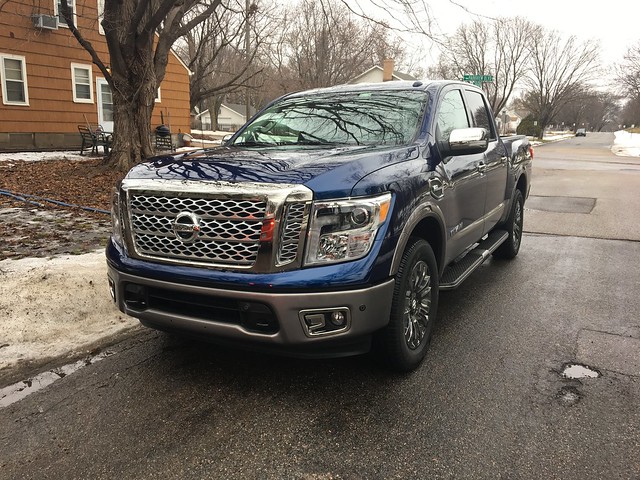 NISSAN TITAN: This came in recently in a platinum Reserve Crew cab model with the 5.6 liter Endurance V8 under its hood. It is very powerful engine that offered great acceleration and solid performance. It does come with a cost in terms of fuel economy. It averaged between 14-15 MPG.

The Crew Cab interior is quite good, in terms of the level of luxury in the Platinum Reserve and the use of "Easter eggs." The instrument panel offers the largest dials – a huge plus for those of us with aging eyes – and a very comprehensive information screen that is also easily readable. NissanConnect is not the best infotainment-app link system out there, but it does well for what it can do.

The Crew Cab configuration of the Titan is capable of towing up to 9,390 pounds with a payload rating of 1,610 pounds. 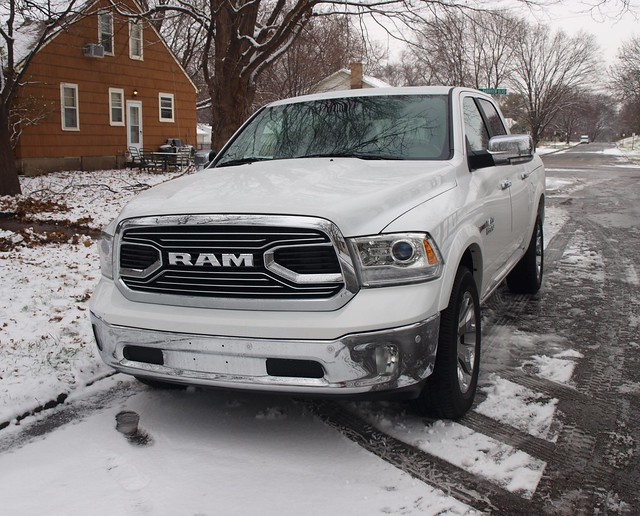 RAM 1500: In all, I have had four Ram 1500s – ranging from a Tradesman regular cab/short box model to a Limited Crew Cab model. There was an Outdoorsman and a Laramie Longhorn Crew Cab in the mix. With the exception of the Limited, they were powered by the 5.7 liter HEMI V8. The Limited came with the 3.0 liter EcoDiesel V6. On some level, both the HEMI and the EcoDiesel felt almost the same at some point, yet the diesel clanged through with the best low end of all the pickups. The HEMI is smoother and can run well with the pack. Fuel economy has been averaging 16 MPG with the HEMI, while the EcoDiesel turned in 23.1 MPG – the bets among full-sized, mid-sized pickups.

I once praised the Ram for having the best cab in the business. That was probably due to its large information screen bookended by two smallish main dials and other gauges. However, that setup has been superseded by other competitors, but points should be made for the mixing of instrument binnacle designs for each trim. Rear seat room is good, but not as spacious as in the Ford and Toyota. On top of UConnect and its large 8.4-inch screen, the Ram can connect to Apple CarPlay and Android Auto quite easily.

A Ram 1500 is capable of towing up 10,190 pounds in its most basic Crew Cab models. Payloads go up to 1,640 pounds. Buyers of the more luxurious trims will find their towing and payloads ratings become lower. These ratings are based on the 5.7 HEMI V8. 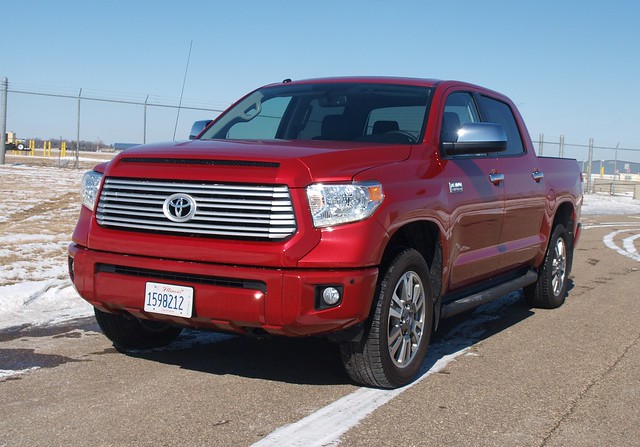 TOYOTA TUNDRA: Of the current generation, I had the chance to sample three different models – the Platinum, the 1794 and the TRD Pro. All three were in the CrewMax configuration with the 5.7 liter i-Force V8 under the hood. I love the raw power of the i-Force, as it always seemed to want to jump out of the hood. It accelerates extremely well without apology. However, I have turned in some low fuel economy figures in them in the 14-16 MPG range.

The revelation about the Tundra's cabin is the rear seat room. It might as well be the truck version of the long wheelbase Lexus LS 460 – it is that spacious! Up front offers large seats that command the road. Then, everything else became a letdown – cheaper materials and readouts and halfway decent switchgear. In the 1794, the buttery soft leather seats pretty much saved the entire cabin, including all of the "Easter eggs" for that trim level. Toyota’s Entune is a solid infotainment system, with access to apps via their own app.

CrewMax models see their payload ratings average between 1,500-1,700 pounds, depending on trim. Maximum towing ratings also range from 8,800 pounds to 9,500 pounds with the 5.7 liter i-Force V8.

All five pickups were provided with basic impressions and points of comparison. Where it gets real difficult is choosing one that is considered better than the rest. It is difficult, because each one has their own set of competencies, along with some of their own drawbacks. To say there is true parity among the five manufacturers is not exactly true. We are pretty close, though.

There is a looming point that does make comparing these five even harder. Most pickup truck buyers are repeat customers. They offer the highest loyalty return rates of any class in the industry. Convincing a Ford truck owner to switch to a GM after owning five F-150s is not going to happen frequently. When a truck fails to live up to expectations – mainly due to quality issues and multiple recalls – that will spur on a conquest purchase.

The reality is that I cannot choose a winner over these five. Not because I lack any personal brand or vehicle preference above one another. There are things I like from each one, but neither truly stands out as being overly superior above the rest.

This is perhaps the best conclusion one could give, but not without a few caveats. One, I expect at least four of these pickups to become "all-new" within the next two years. With every new pickup truck being introduced, the bar gets raised – even if it is just a slight rise. Who knows what will come in the future – aside from Ford’s recently introduced installation of a 10-speed automatic transmission for the F-150.

For now, please consider all of these great pickups for your next truck.