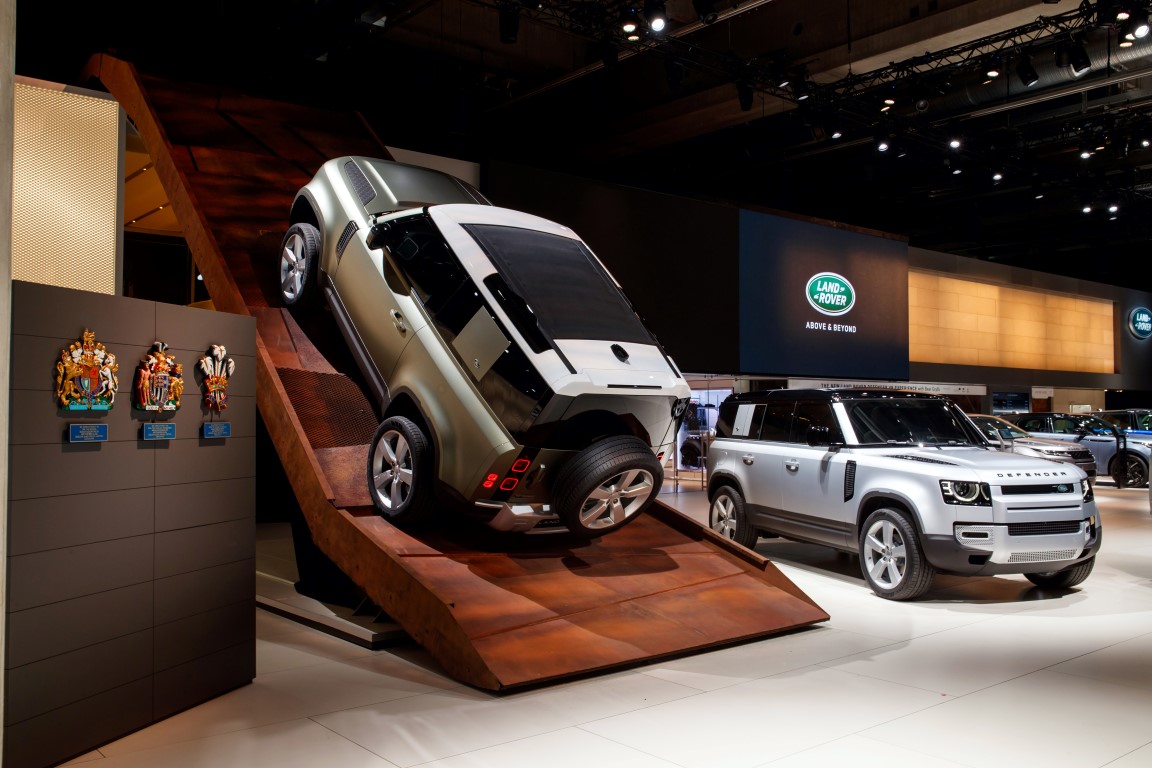 As the 2019-2020 Auto Show season kicks off at the IAA in Frankfurt, Germany, we would probably expect a high degree of electrified introductions coming our way. That has been the mantra leading into the new model year – to electrify everything.

As the 2019-2020 Auto Show season kicks off at the IAA in Frankfurt, Germany, we would probably expect a high degree of electrified introductions coming our way. That has been the mantra leading into the new model year – to electrify everything.

We already saw the 2021 Porsche Taycan introduced ahead of the show. Volkswagen added the ID.3 electric hatchback to go along with their slimmed down logo. The rest of the show has been loaded with concepts and vehicles the USA will never see, including a look into the next BMW 4-Series coupe.

If the question of relevance should come up, then the focus should be on the 2020 Land Rover Defender. It appears to be the only production model debut at Frankfurt that is coming to our shores.

The Defender has been teased in various ways. All of the teases point to one thing – only the spirit of Land Rover's defining vehicle remains in this all-new SUV.

The newest Defender will also be electrified. The mild hybrid system is used for the top-specification 3.0-liter in-line six-cylinder engine. This engine offers both turbocharging and supercharging, on top of using a 48-volt electrical system to power everything from interior features to powering the hybrid drive system. In all, this engine is said to net 395 horsepower with 406 pound-feet of torque.

The standard engine is a turbocharged 2.0-liter four-cylinder engine, good for 296 horsepower. Both engines are channeled through an eight-speed ZF automatic transmission and a twin-speed transfer case. The latter part of this driveline denotes that the Defender will return Land Rover back to its off-roading roots. Or, so we hope.

Actually, Land Rover states that the new Defender was designed for off-road capability. Though it does use a new configurable Terrain Response system that customizes the kind of traction needed for specific terrain and climate conditions. Electric aids, including a wade sensor, adds to the capability picture of the new Defender to simply make things easier for the off roader to perform through any conditions.

Towing capacity has been raised to a maximum of 8,201 pounds. If you want a reason to get a defender come next spring, the towing capacity should be considered when compared to its potential rivals, including the Jeep Wrangler.

Perhaps the capability and performance statements should distract you from the noise coming from the Defender’s critics. Because most of my colleagues "went in" on the overall design. For a vehicle named "Defender," one should expect a rugged exterior that holds true to its 71-year-old roots. We know we weren’t getting an old school look, but the critics did not expect the new Defender to look like a scaled down version of the first-generation Discovery.

Sorry to offend any Land Rover enthusiast, but it does. With perhaps a little paean to the Toyota FJ Cruiser in the C pillar.

I get that Land Rover wanted some form of fusion of modern design with a few nods to its heritage. However, I feel that it might be an acquired taste for conquest buyers. It appears to be true inside, as well as on the outside.

USA customers will get the four-door, long wheelbase 110 model first. It will come in six trim levels, including a comprehensive First Edition. The Defender X with the mild hybrid six-cylinder engine – also known as the P400, will offer the highest level of specification that includes all of the electronic off-road features. The first 110 models are scheduled to arrive in the spring of 2020 with a starting price of $49,900. That will get you the four-cylinder turbocharged engine, known as the P300, in Standard trim.

The photo you are seeing is of the two-door 90 model, which will arrive in the USA later in 2020. Though not confirmed, we should expect all of the engine and trim options available on this short-wheelbase version.

Seeing and reading about the Defender brings up something I’ve been advocating of late – to offer more off-road ready SUVs and pickup trucks that have real capability and traction management. It also sparks a segue to the upcoming 2021 Ford Bronco and the next generation Toyota 4Runner, both aimed at the Jeep Wrangler. Though the Land Rover Defender plays in a luxury vehicle space, it is still less expensive than its natural rival – the Mercedes-Benz G-Class.

Despite some of the critics' feedback, we should welcome the new Land Rover Defender next year. It represents an additional product necessary to continue to build its portfolio in the USA – including the line of Range Rovers and Jaguars. It also fits the brand’s image by bridging heritage with the needs of modern SUV consumers who would want one for overlanding purposes.

And, that’s all from Frankfurt. Now, if they can stop teasing us about this Defender…