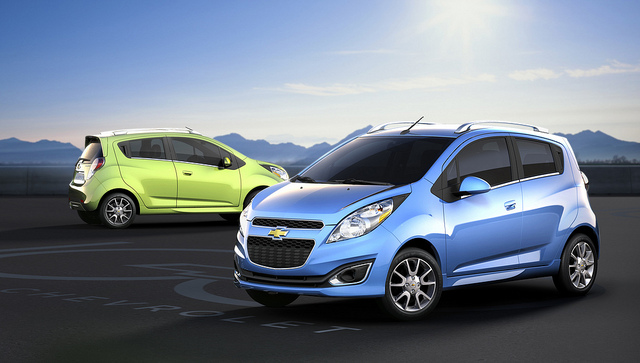 The quote above was tweeted on Tuesday while in the midst of taking photos across downtown Minneapolis and fielding a round of press releases on my Blackberry. When automotive journalists get news from the industry, we try our best to analyze it for you. Some opinion comes out, but only based on analysis rather than pure editorial.

"A journalist's job is never done."

The quote above was tweeted on Tuesday while in the midst of taking photos across downtown Minneapolis and fielding a round of press releases on my Blackberry. When automotive journalists get news from the industry, we try our best to analyze it for you. Some opinion comes out, but only based on analysis rather than pure editorial.

Over the past few days, General Motors rattled off a series of news flashes that certainly grabbed my attention. Some of it was expected – the confirmation that Chevrolet Colorado mid-size truck will be built and sold in the USA, for one. Others came as quite a surprise – especially the announcement of two electric vehicles.

The overall analysis I'd give on all of the news from GM was the fact that they are on their way towards fulfilling some promises they made years ago on the direction they wanted to go with their business. The globalization of Chevrolet with a singular product strategy stretching from the Spark city car to a truck and SUV line made for both industrialized and developing markets worldwide. The announcements Chevrolet made not only were marked as a paean to their Centennial celebration, but rather a roadmap towards the next century for the brand.

For Cadillac, their announcements marked further advancement of the redefining of the brand. Years after the original CTS changed the way luxury buyers saw the old crest-and-wreath, the image of their smallest sedan since the Cimarron going around the Nurburgring created quite the buzz. Add the introduction of the new CUE infotainment system and the conversation changes about Cadillac’s future. It certainly is looking very bright.

To decipher this mountain of news, it is my job to walk you through all of it the only way I can…

CHEVROLET COLORADO: Though a lot of detail on the North American version of the mid-sized pickup was not made available, everything else about the Colorado appeared to be spot on. The first trucks rolled off the assembly line in Thailand to be sold in one of the strongest truck markets on the planet. Other markets will follow as the gold bowtie will now appear on most versions of this truck. Australia and New Zealand are confirmed to get it with the Holden badge.

The Thai-built versions will have two turbocharged diesels available to their customers. Subsequent discussions amongst journalists and enthusiasts hoped that either one or both engines would be made available for the North American version. For a mid-sized pickup to have a diesel – one that meets 50-state emissions standards – would be at least one trump card the new Colorado would have against the Toyota Tacoma and the Nissan Frontier.

The Colorado has the potential to change the mid-sized pickup game even before the first one is completed in an American assembly plant. In the meantime, Toyota, Nissan, Honda and Chrysler may want to consider going back to the drawing board. Maybe Ford might want to reconsider its decision on the Ranger…

CHEVROLET "TRAILBLAZER": With the onset of the Colorado comes a SUV version from the same platform. The news about this vehicle seemed apropos after a flurry of twitter chatting about the speculation of such a vehicle becoming available. It appeared that someone over at the Renaissance Center read our collective tweeting minds.

The good news about this SUV is that it is needed in markets where it can flourish. In Brazil, the Blazer continues to be sold on a platform dating back a couple of decades. A modernized platform will help move the bar in Latin America for a successful Chevrolet SUV that can take the terrain and climate. Southern Asia is also another key market for such a vehicle. From India to The Philippines to China, SUVs are hugely popular and the marketplace is very competitive. A technically advanced and well-designed SUV will not only turn heads, it will become conquests over Toyota, Mitsubishi, FAW and Mahindra at the local Chevy dealer. In fact, the new vehicle will debut at the Dubai Motor Show in a few weeks.

What about Chevrolet's home market? Questions were raised whether the North American market can sell such a vehicle again – after the market was steered towards car-based crossovers instead of truck-based SUVs. If this baby can bring some true off-road capability to the SUV game, GM may want to get ready to welcome the 4X4 enthusiast back to their dealerships.

CHEVROLET SPARK: Originally conceived as the replacement for the Matiz city car, the Spark became a beacon for the revolution towards the bowtie’s globalization. It is selling decently everywhere else on the planet – except the USA and Canada. Next year, that will change with the introduction of a car to compete against the smart forTwo and the Scion iQ.

The five-door city car will come with a 1.2litre engine either with a manual or an automatic tacked onto it. There will be some revisions made from the global version to fit North American safety standards, but it will be the same Spark sold in South Korea, the UK, Mexico and India. GM is promising a lot of things for the Spark's debut: Affordability, efficiency and driving dynamics. With the Sonic starting over $14,000, affordability appears to be relative – hoping it may end up being the lowest priced car in this country in the end.

There is a twist to the Spark story. Not only will we see the regular petrol-powered Spark…an all-electric model will join the fray. This is quite a curious proposition considering sales of the Volt and Nissan Leaf had not been at volumes projected by their keepers. With Fiat bringing out a 500 EV, a Spark EV may seem like a sustainable car that would tip the market. The idea is fantastic, considering GM's history with EVs. The Spark could be the one electric car that would forgive the sins of the EV1.

The one thing the Spark would hope to do is to get Americans into small cars. This would be a great first car for young drivers or families that could only afford pre-owned vehicles that waste petrol. If this is priced right (and built in the NAFTA zone), you could see plenty of Sparks sold in urban markets where parking is a premium and errands can be achieved by zipping around lumbering towerblocks on the road.

CADILLAC XTS WITH CUE: Next month, we will see what the production XTS will finally look like. We know it will replace both the STS and DTS on an elongated front-drive platform derived from GM's Epsilon II architecture. Everything else will have to wait until then…

However, Cadillac did give us something to wag our tongues at. We had our moments with GM's infotainment systems over the years. We know they're improving, but with the bar set high thanks to the competition, something had to give. Enter the Cadillac User Experience – something we pundits are calling CUE "Cadillac's iPhone" (or iPad). It elevates the infotainment experience where it is no longer just satellite radio, navigation and smart phone integration. It senses the hand and its movement to make adjustments to the system by recognizing multiple touch methods. It is also customizable to the user for look and feel – something we always wanted from our infotainment systems.

CUE will not only be available in the XTS. The ATS and the SRX will also get this system as well during 2012.

CADILLAC ATS: Speaking of which, did anyone see the video of this baby rounding the Green Hell? There was a noise coming from it that is far from any Cadillac ever made. It was magical.

The video also revealed an interior that is going to turn heads. Just one glimpse of that interior tells me how Cadillac had truly thought this sedan through by integrating its Art&Science design language onto a sports sedan of a smaller stature.

What about the rest of this car? If it sounds as great as it did in the video, embody is a higher level of quality and can shake the foundation of the entry-level premium sports sedan market, I have extremely high hopes for the ATS’ success. Just need some details to go on…

In all, GM seems to be establishing a path towards strengthening their post-Bankruptcy success. It's great that the product is finally coming together. What they need is to continue being consistent in quality, reliable and inexpensive to run. GM is far from the badge-engineered, over-simplified and shortsighted product development train of the past. With the five vehicles, only the world awaits their arrival – hungry for a first taste.