You want me to cover the local car scene in the Minneapolis-St. Paul area more intensely?

Well, sure, I can do that. I have done it for a few years. I have seen my share of good and not-so-good along the way. This job of this site and my work is to not shame anyone. I always want to see the good in this work and how much that good can inspire others to follow in their footsteps.

Still, the question is whether to pursue covering the local car scene and to what extent it has to be done.

This is the toughest question, since I have to decide how to do so. The journalist in me wants to, but has seen enough to not consider anything "newsworthy." I also made friends and inroads with clubs and individuals that are a part of the scene.

That is not the problem. It is about workflow. Understand that my job has a more global reach than just the Twin Cities. I do recognize that I have a deeper following in this market, but I work to feed other outlets with product-based stories and try to create industry and historic material to feed this anaconda. If something huge comes along, of course I will cover it.

This is not just making a statement on how to effectively cover something that continues to grow and has been an example of carmmunity that is collaborative, integrative and still has room for more outlets to shine. Yet, I have found that the scene is also not perfect.

Not to name names of individuals and clubs, but I have found there are some friction in some corners of the scene. Granted, it is normal to see that. It is concerning when it involves people I have been supporting and working with. You want to see the positive, but take in account the understanding that not everyone is going to get along in the same space.

And, that's fine. Divides will happen. People will hate…or dislike. The carmmunity goes on.

In some way, I found that if I wanted to take off my journalist's cap and do something about the carmunnity, things might improve for everyone. Maybe so, but at least plant a seed in it to try to create an example of a carmmunity – at least a part of it – that would take a different approach to instill enthusiasm and camaraderie by being inclusive, friendly and devoid of the chauvinism seen in many carmmunities across the globe.

Understand what I mean by chauvinism. It is a term that is better used to defend a brand, vehicle or specific spec to the point that it is the only thing worth living for. It is that car and nothing else. That is what drives some carmmunities I have witnessed – even here in the Twin Cities. However, it is not as bad as in other places – a saving grace, perhaps?

Yet, there are other divides that brought me towards wanting to do something inclusive. I have witnessed and learned of instances of racism, sexism and homophobia in the carmmunity. In a naive way, one would think by having a cool car would be the ticket into this world. Not exactly. It was these instances – none specific to divulge in public – that helped frame what came about in my thinking.

I was not alone. There were discussions dating back to Boost for The Cure in April among a few friends on creating a car club that would be inclusive on many levels on the onset. It falls upon the ideal of "no matter who you are, no matter what you drive, you are a part of this." Once this group of friends honed in the mission statement and plans on becoming a car club, the ball was in motion…albeit slowly, but surely.

One thing I will say about these group of friends: We have known of each other for up to a decade, thanks to certain non-vehicular outlets we used to be associated with. We share a deep enthusiasm for the automobile, albeit from different angles. We also share our experiences within the cultural identity we have in common – the non-vehicular arena I just referred to. Yet, the founding core of this group has deeper roots with the automobile – mechanics, enthusiasts…and some member of the automotive media. 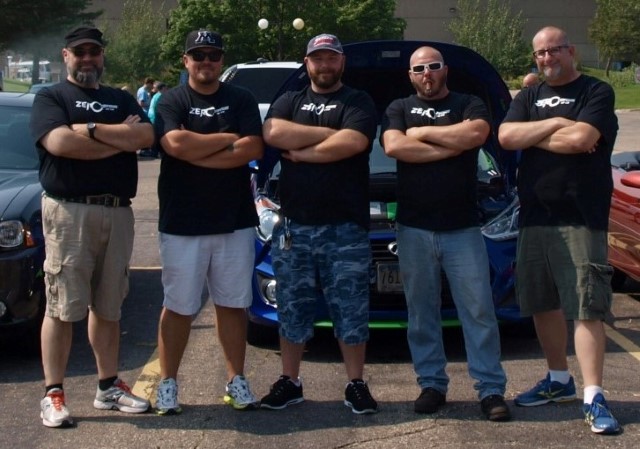 Together, we formed Zero Composure.

This is our response to the carmmunity – a membership-driven car club that concentrates on inclusion of all people who are simply enthusiasts. Our base is in the Twin Cities, but we are aware that our reach will be over-arching. We may come from a particular culture and community, but we endeavor to welcome everyone who is down for our cause – the unconditional love of the automobile.

Zero Composure is at its genesis right now. The few of us are working on getting things rolling with memberships, events and collaborations. There have been some connections made, while there is more to cultivate and yield. The Facebook page is up for now. I'm sure there will be more to come from us.

How will V&R fit within the Zero Composure construct? I am a part of Zero Composure as an officer and founding member. V&R is seen as a social-media driven beacon with more followers than before. Yet, the work of Zero Composure is fluid and fits within the promotion of a carmmunity that healthy, happy, friendly, collaborative and open. V&R does the same on a wider stage, through partnerships with Minnesota Nissan Infiniti (MNNI), Lifestyle Minnesota, InCarNation, SouthWest Sunday Cruise (SWSC), and, of course, Zero Composure.

Let me say that I am proud to be working with Steve and Mike Schmidt, Jaysen Cook and Travis Brick on this new club. And we look forward to welcoming new members to this club in the days to come.

The time has come for a membership-driven car organization that goes beyond individual and collective identity, and vehicular genre. Zero Composure is off to a good start. Give it time. Oh, and stay tuned on here for more.