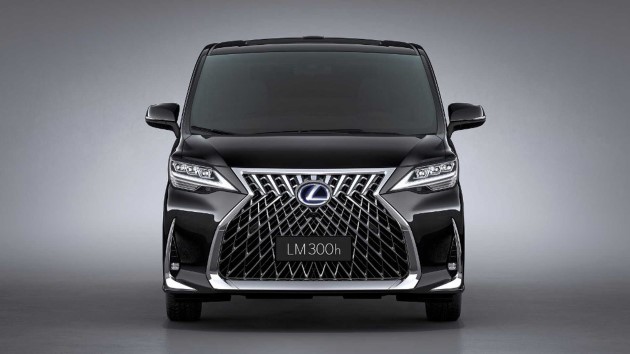 First of all, don’t panic. This van is not coming to our shores.

First of all, don’t panic. This van is not coming to our shores.

But, you panicked. It is because you saw the Lexus LM debut at Auto China in Shanghai a few weeks ago. The luxury van stole a few glances beyond Asia.

To explain what the Lexus LM is, you have to look at the Toyota Alphard – a popular minivan sold in Japan and across Asia. The LM takes the Alphard and updates the interior to Lexus standards – wood, perforated leather and seating for seven. The LM 300h is offered as a hybrid model with the familiar 2.5-liter four-cylinder engine with the parallel hybrid electric driveline. You can also get this in a V6 model – the LM 350.

In case you’re wondering, there are some components found on the Lexus ES that underpins the LM minivan.

All of this sounds great, except for one problem…and it is worth repeating. We, in North America, are not getting this.

In Asia, minivans are integral to the transportation scene. They serve in both private and public transportation systems. To state it this way is to understand why minivans, such as the Toyota Alphard, are popular in places stretching from Singapore to Seoul.

One of the trends in Asian automotive culture is the luxury minivan. One that offers more than just seven-to-eight seats in leather upholstery. Customers for these luxury minivans range from well-off families to livery services. In China, it is customary for successful people to be chauffeured driven – hence why you see a lot of extended-wheelbase sedans from popular models seen worldwide.

It is exactly why Lexus debuted the LM minivan in Shanghai. The market for a luxury minivan from a premium brand offers Chinese customers an option for such a vehicle to either be chauffeured in or to ride in absolute comfort above the rest of the populous.

Unfortunately, this is not a prevailing trend elsewhere in the world.

First off, North Americans would rather be chauffeured in a large SUV than a minivan. That is, unless there are a more than five of us. Then, comes either a larger van or a bus created from a cab/chassis model. Sometimes, minivans are used for transport purposes – more of what can be best described as “non-luxury purposes.”

Secondly, our minivan market has not been the same over the past 35 years. From the first fruit of Chrysler’s K-Car-based minivans, the market remains on decline after years of shifting to SUVs. Yet, it is still relevant, as Fiat Chrysler Automobiles, Toyota, Honda, Kia, and Mercedes-Benz continue to offer competitive vehicles for a mainstream marketplace. Neither of which offer a factory-direct luxury van option on the level of the Lexus LM.

By the way, we never got the Mazda Bongo stateside. A shame, really.

Neither of these 1980s Japanese minivans were ever sold as luxury models from the factory. Nor has there been an American or European minivan sold in the USA that offered luxury on the level of the new Lexus LM. There never will be such a minivan sold here, even though there is a growing movement to reintroduce this once mighty vehicle as the alternative to the crossover. If this movement grows, will we see a minivan with the same level of luxury as the LM?

But, we should not discount the Asian market. Not when the Lexus LM fulfills a space where “crazy rich” families can ride through Singapore, Kuala Lumpur, Shanghai, Osaka, Hong Kong, Seoul, and other Asian financial centers in absolute style. And, without shame. There’s really no shame in riding a luxury minivan.

Leave Lexus to do their thing in Asia. And, don’t ask them when the LM is coming stateside, either.