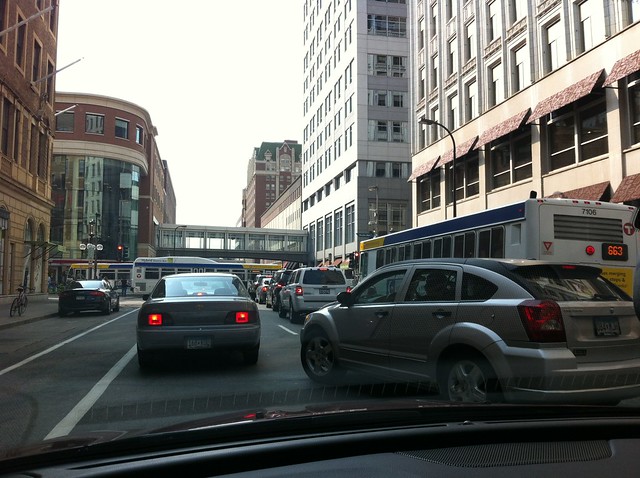 We all think we're the best drivers in the world.

In truth, we are not. We learn how to drive, then we take what we learned and try it out on the roadways. As we grow older, we think we’re still competent behind the wheel. With kids, spouses, significant others in tow, we become a unit with only one person behind the wheel. Yet, the unit is never unified – no matter the noise within the cabin. Let's not forget about our daily commute as we are locked in on trying to get to work on time and praying that we get home in one piece.

Add all of this to today's electronic distractions. Our smart phones remain untethered to our infotainment systems, as we juggle it to our ear while our hands are on the wheel. We are found behind the wheel texting, taking camera phone shots, updating our Facebook status, Snapchatting…and so on.

Meanwhile, we're doing stupid stuff on the road. We're crossing solid white lines to make lane changes. We're passing slower vehicles by crossing the solid yellow line. We are found making other mistakes,such as determining what constitutes a lane of traffic and making terrible merges in our wake. Not to mention we’re following too close to each other.

Shall I go on?

I could, but perhaps these facts might help us understand why I am bringing this up…all of this according to the National Highway Traffic and Safety Administration (NHTSA):

Distracted drivers, including those using electronic devices, were determined as the cause of 3,174 traffic deaths in the USA during 2014. Add another 431,000 traffic accidents caused by distracted drivers in the USA to that figure during the same calendar year.

Over the past ten years, around 7,000 traffic deaths were caused by drowsy driving situations in the USA.

Going back to 2012, more than 10,000 people were killed in accidents while under the influence of alcoholic beverages. Again, this was solely in the USA.

While these are random statistics gleaned from the NHTSA, they only represent a snapshot on how we are as a nation of drivers.

However, statistics only cover what is reported by public safety agencies. With technology, we can record the crimes of others unreported back to the NHTSA. Popular in places such as Russia (thanks to YouTube), the dashcam can record real time situations that used to require word of mouth to dispense back to a public safety officer. It could be a simple request of "hey, I got a recording from my dashcam, what's your e-mail so I can send it to you?"

Technology does not cover everything reality throws at us. I wished it did. If you sat beside me when I was behind the wheel while someone else was doing something stupid – and illegal – you would probably think I need Jesus. Maybe a Rabbi. Or, a translator in Spanish and Jamaican Patrois.

Let's consider reality for a moment. How are you handling your driving habits? I wished I knew the answer to that question, as I rarely sit beside you in the passenger seat. I can only imagine that we approach driving in many different ways. Is there a right way and a wrong way? Yes. Which one are you? There's not enough bandwidth to breach that question.

I can impart some wisdom here. First off, I expect people to know how to merge on the highway. If you understand that you must be up to highway speed when entering into one – please measure your distance and be aware of everyone on it! I also expect people to leave their phones alone while driving. If they must use their phone – get a Bluetooth device (that is, unless the jursidiction you’re driving in has tougher laws on using phones while operating a motor vehicle). That text or Facebook post can wait! Plus, I hope you all can brush up on your traffic laws – such as passing where you shouldn’t. Your competency behind the wheel will depend on life or death – your life, included!

So, where do our public safety departments come into play? Their job is to enforce the laws, correct? I often hear many different things, from "where are they when you need them" to "why are they really pulling me over?" You see, instead of hating Mr. Officer, let him or her be your guide. Their job is to keep you and everyone around you safe on the road. Once you understand that, perhaps your awareness of your own driving will improve.

Now that the summer travel season is underway, let's be safe and sane. I will, too. I promise. Road rage is a terrible thing to get into. I would rather be healthy around you than using expletives and gestures to show my displeasure with your driving.