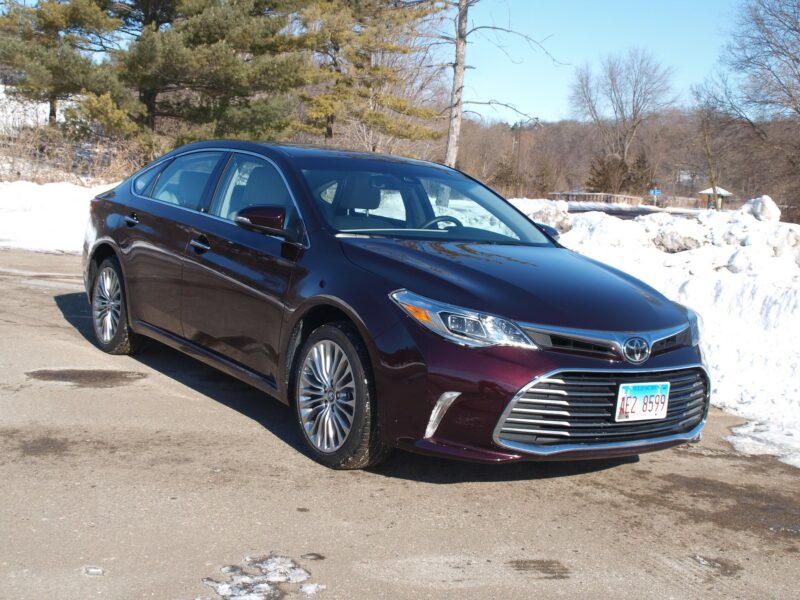 Here is something you should know about me…I have a soft spot for big sedans.

Perhaps I always had. Of course, size being relative over the years I enjoyed the large car. My first car was a 227-inch long 1972 Oldsmobile Ninety-Eight Luxury Sedan. From there, I always enjoyed cars that would be considered "big" by today's standards – the Ford Taurus, Mercury Sable, Dodge Intrepid, Dodge Charger, Chrysler 300, Toyota Avalon, and so forth.

There is nothing like a big car. They are supreme cruisers – nice ride with plenty of power to go anywhere. Room for five, but more importantly – room for me behind the wheel. Of course, I was bigger during those days.

As a kid, I never thought of cars being small. There were Volkswagen Beetles and Japanese compacts, but most American cars were larger, heavier, and offered acres of style and comfort compared to their imported counterparts. If you arrived at school in your parent's Beetle, Corolla, or Datsun 510…you might have been laughed at. You came in a utilitarian appliance made of thinner metal and not much else.

That was the attitude of being around big cars. Of course, things have changed since. The cars have, too. Even big cars over time through downsizing, adopting front-wheel drive, using V6 engines that were as powerful as a V8 of the smog-checked and oil-crises malaise era, and finding out that you can have the same amount of room in a smaller "full sized" sedan than in a car of the same class 10-20 years prior.

They had presence, stature, grace, class, and an air of superiority. We thought those days would never end. Well…

Sadly, the big car is a dying breed. It does not help when sales of sedans are down overall. Still, an entire class of car is becoming extinct. For example, Hyundai axed the Azera last year, while Ford will be killing the Taurus once and for all in 2019. Toyota, Fiat Chrysler Automobiles, General Motors, Nissan, and Kia are doing their best to keep their large sedans relevant to their intended demographic.

But, why care about big cars anymore? Especially, when you have crossovers and SUVs that do more.

When was the last time you put anything in a trunk? We take for granted how much SUVs and Crossovers have the same, if not greater cargo capacity to throw lots of luggage for a road trip. We often forget that big cars often have 16 or more cubic feet of pace to do the same exact thing. Some crossovers do not have that much space behind the rearmost seat – folded up – and with the cargo cover over said space.

I remember in 2004 when Ford was selling the fact that their then-new Five Hundred sedan could hold up to nine golf bags inside their trunk. It would also fit five adults inside. This eclipsed even the Taurus (of that time) and the Crown Victoria. Yet, the Five Hundred (later named – you guessed it – the Taurus) was losing favor among consumers because of its size, fuel economy, and that you can get a crossover off the same platform that could do more.

But, we often forget that crossovers and SUVs have replaced the station wagon. Big cars were also sold in station wagon form. And, yes, they were epic! They had names, like Country Squire, Estate Wagon, Custom Cruiser, Town & Country, Safari, Colony Park…and so forth. Midsized ones, too – such as the Vista Cruiser. Their names lent to a certain air of luxury and romance of family travel. Not sure how an X3 or X5 can conjure up the same romance and air of family travel as an old-school station wagon.

Even the big cars had their own personalities based on their nameplates. You knew that driving an Impala was fine unless you were in a Caprice. A Galaxie 500 was OK, but an LTD was much, much better. You could drive a Torino, but a Gran Torino was the way to go! Even as they were downsized, big cars still had an air of superiority. They still eclipsed anything offered from Japan.

When everyone caught up with America, then you still had that want of something big, comfortable and accommodating for you, your family, your associates, your clients…your ego. The Nissan Maxima offered the comforts of luxury inside their big car. It also had a performance-oriented side known as the "four-door sports car." Hyundai brought over the Grandeur in the form of the XG. They thought what was good for government officials and corporate executives would be good for big car buyers here.

As we found out over time that demographics can be a challenge. We found that certain generations revere the big car over others. No one under – ehem – my age would buy one today. Heck, even that demographic are buying SUVs and crossovers because of their seating position and step-up entry and exit to protect their physical health.

However, I call "bullshit." Some big cars still sell. The Dodge Charger is a performance proposition offering an aggressive look and atmosphere. The Charger lineup ranges from a V6-powered sedan with available all-wheel drive to a 707-horsepower supercharged beast that is really a pussycat. That is until you use the "red key." The Charger just happens to be one of my favorite cars of all time.

Big cars still mean something to other manufacturers. Toyota just introduced a new generation Avalon for 2019. The design is sharper inside and out, there are more power and trim level choices than before. It really looks desirable for something not wearing the luxurious Lexus badge. The fact that Toyota is committed to this segment shows how much big cars still mean something to this market, even at lower volumes than before.

Why am I discussing big cars at all, if sales are becoming less significant? Because they still put a smile on my face. And, they still matter. How?

During this past couple of weeks, my partner Jason and I spent a lot of quality time together between my place in the Twin Cities and his in Southeastern Wisconsin. He owns a 2014 Toyota Avalon XLE Touring, which is as big as a car you can get from them. Not only was a sweet ride, it returned over 32 MPG on the drive back to his place. You read that correctly – a 268-horsepower V6 in a car that is 195 inches long and weighs over 3,500 pounds turning over 32 MPG! The Environmental Protection Agency had this car rated at 31 MPG on the highway.

There's your reason why big cars still matter. And, why they exist in a world where SUVs and crossovers rule the highway. Because when you’re of certain generations, you lived by the fact that you had room to spare, trunk space for your luggage, all the power you need, and a ride that induces naps – except for the driver, of course.

As a guy in his mid-50s, big cars will always be in my automotive lexicon and DNA. The memories are full of them.