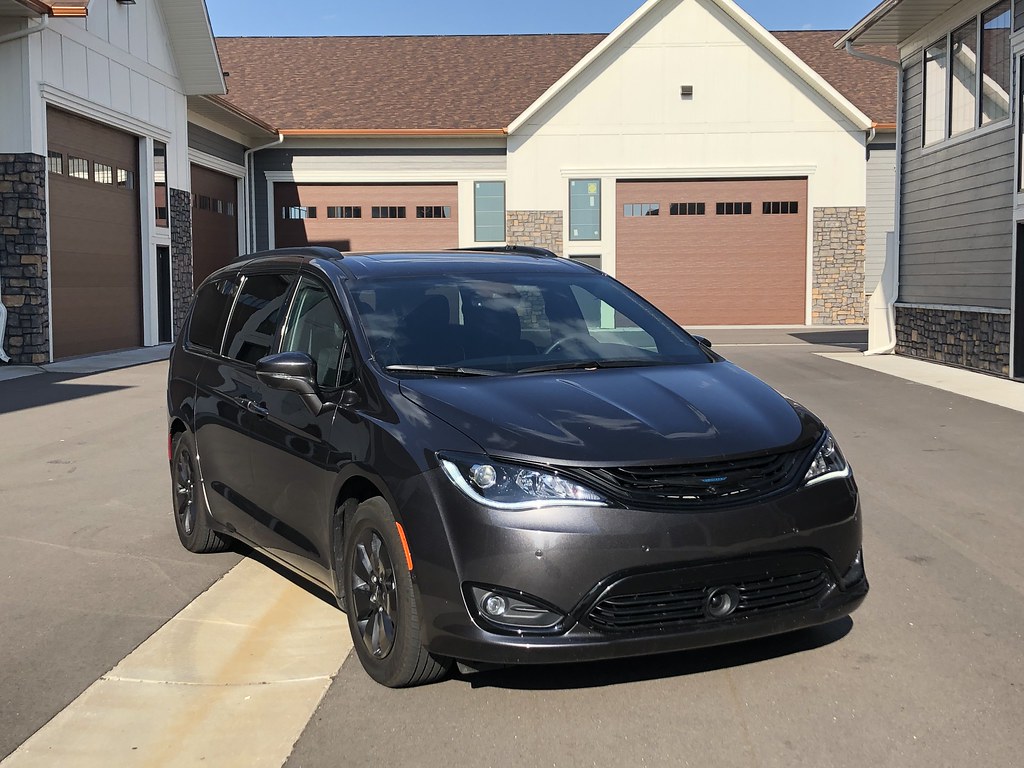 Can we talk about the minivan for a moment? Let's go back to the 1950s when our country was growing. We came out of World War II, and we were looking for family transportation. The first answer we came up with was the station wagon. This long-roofed vehicular solution was on a growth spurt from the end of World War II to well into the 1950s. We even saw three-row station wagons, mainly the rear seat facing out towards the back window.

Can we talk about the minivan for a moment?

Let's go back to the 1950s when our country was growing. We came out of World War II, and we were looking for family transportation. The first answer we came up with was the station wagon. This long-roofed vehicular solution was on a growth spurt from the end of World War II to well into the 1950s. We even saw three-row station wagons, mainly the rear seat facing out towards the back window.

We were happy to load up the kids in these vehicles, and we were happy to take long family trips to be able to see the sights. The Interstate highway system was being built and station wagons ruled the road.

Right about the same time, vans were starting to be seen as an alternative to station wagons. They were much larger inside so growing families would be able to utilize the interior space. Cargo space in some of these vans was kind of limited, especially when you talk about the Volkswagen Type 2, also known as the Microbus. However, the domestic automakers started to take notice and started producing their own version of the vans.

By 1960, Chevrolet came up with the Corvair Van, which was taking the rear-engine platform and creating a cab forward design over it. Ford followed up with the Falcon Van, which eventually became the Econoline, and later in the decade, Dodge joined in the fray. Now all of these vans were three row vans. They were able to accommodate larger families.

Eventually, Chevrolet and GMC changed the design to move the engine up front. Therefore, they'd be able to create more cargo capacity as Ford and Dodge already have. Yet, they were seen as "the solution." They were not as big as the vans that they eventually grew into later towards the end of the decade.

By 1972, all three Detroit manufacturers offered full-size vans that were able to initially fit three to four rows of passengers, and, given the chance, those vans started growing in length to accommodate up to 15 people. How many families do you know that have 15 members? Maybe extended families but not the so-called "nuclear family."

Station wagons continued into the 1970s, and they too have grown in length. Of course, we're talking the likes of the Ford LTD Country Squire, the Chevrolet Kingswood Wagon based off of the Impala and Caprice. All GM divisions, except for Cadillac and GMC, had their own luxury station wagon with the sliding down rear tailgate.

Obviously, there needed to be a solution to mix the best of the station wagon and the full-sized van. Lee Iacocca had one on the table at Ford, the Mini-Max. The Mini-Max was a solution that was based on a front-drive platform that was eventually rejected by Henry Ford II in the 1970s. That was a few years later when Iacocca was fired for Ford, he took the plans for the Mini-Max and the front drive platform and brought it with him to Chrysler. In the fall of 1983, those plans became reality in the form of the Dodge Caravan and the Plymouth Voyager.

Thirty-five years later, the minivan continues. During the minivan?s growth during the 1980s and in the early 1990s we saw various vehicles of many different stripes. At the same time, we also saw the backlash against the minivan. Minivans were seen as boxy and frumpy conveyances where families were able to load up on hockey bags and hockey players for the hockey mom to drop them off. Unfortunately, minivans started to become uncool. Therefore, they gave way to the SUV.

The body-on-frame SUV is preferred because of the strength of the frame allows for the body to accommodate a lot more in terms of towing and other capabilities including loading up on hockey bags and hockey players. The SUV also turned into the crossover, the car-based version of the same type of vehicle. Not as capable as an SUV but was still able to accommodate hockey bags and kids and a hockey mom.

Here's the problem with that. There are limitations to the SUV, interior space, especially when you have growing kids. Now what I mean by growing kids are kids that are just reaching beyond their puberty, i.e. teenagers that are growing beyond six-feet tall and of course in a mass of over around 200-plus pounds. You need more space for them to be comfortable. You can't shove them in the third row most of these SUV these days.

Today, the minivan soldiers on. There are fewer of them than there were saying in the early 1990s, however, we must take stock in the fact that these vehicles exist for a particular reason and purpose. My argument for the minivan is quite simple. Look at the passenger volume numbers, as administered by the Society of Automotive Engineers. See if you take a look at all the interior space numbers and compare that to your favorite SUV. You'll see why I make the argument for minivans for families that are maturing, i.e. families that still have teenagers, that still are active, and parents that are able to still drive minivans with of course the same driving height as, say, most crossovers and SUVs.

The other thing to take into consideration is comfort. If you look at all the minivans that are on sale in the United States, sit in all three rows. Now, compare that to your favorite three-row SUV. The key word here is comfort. If you have growing kids, you need to make sure that they're comfortable. They will have access to the side sliding doors, which is a major convenience minivans offer to their passengers.

Take into consideration cargo space. Now some people will argue back saying that the Chevrolet Suburban, the GMC Yukon XL and the Ford Expedition long wheelbase versions have plenty of cargo room behind the third row. Now in terms of length, this is true, in terms of height this is where the minivan wins. You could stand up several items in the back cargo hold in a minivan, and since most of the minivans actually have foldable rear seats that fold into the floor, there's an indent for even a deeper cargo hold making tall items easier to manage.

Let's talk about economics. Have you priced a Chevrolet Suburban lately? I will bet you that you'll probably find some sticker shock in your life because most Suburbans these days are running well above $50,000. Plenty of minivans these days are keeping below $50,000. That's the threshold between affordability and "I better take out a second mortgage" for the average family.

Should I mention that, on average, minivans get better fuel economy than its large SUV counterparts?

Obviously, minivans are not holding their value as much as some SUVs. That may be a golden opportunity for those consumers on a budget. Some minivans are really well built. You may want to take a look at them when you go out into the pre-owned market. And some minivans have been more gently driven compared to an SUV. Again, these are part of a basic argument based on economics and space.

I'm sure that there's an argument for driving enjoyment. No, we're not suggesting that minivans are a pleasure to drive. I've recently worked with a 2019 Chrysler Pacifica Hybrid Limited with the S Appearance Package, and in terms of the driving experience, it is a lovely vehicle to drive. Let me qualify that assessment by stating that I've driven a couple of larger SUVs and, sometimes, they could be a little bit of a handful. I'm sure if you've driven them for years and can conclude otherwise.

However, I get behind a Chrysler Pacifica and I feel more comfortable. I'm actually lower to the ground than an SUV, even though my driving height is elevated. Not to mention that the S Appearance Package is really cool. It's not just blacked out, or as the kids say these days "murdered out." I don't think you could find a really good seat like the ones in my tester Pacifica amongst its competition.

There's something about the Chrysler Pacifica that makes you want to rethink your thoughts on minivans. It's a stylish number. It's also quite spacious inside. If you get into the Limited, either in the regular V6 or the Hybrid version, and add the S Appearance Package, this minivan will elevate your cool factor in the school pick-up lane or at the local ice arena.

Think about this for a moment: would you rather have a cool minivan or an SUV that everyone seems to have ? in the same color and specification? I?m sure you will have to find which one is actually yours in a parking lot of full of them.

Yes, I get it. Sales are down for minivans. On average, minivans are running volume-wise between 7,000 and 9,000 units sold per month in the United States. That's still quite a good clip if you consider some other vehicles that should be selling a lot more don't even match the type of volume each of the minivans yield per month.

There are families that still want minivans, but I think that I really need to truly convince others to even agree that the minivan (a) not dead, (b) very relevant, and (c) could be the solution to growing families again.

However, if you consider all of the machinations of minivans that have occurred, you have to conclude that over 35 years, this perfect solution for growing families is still relevant for consumers. Of course, people need to start buying them. That's probably something that should be repeated. Do you have to force a minivan down a family's throat? Not necessarily, but please allow them to discover what a minivan has to offer.

If you are one of those who are ready to nail the coffin on the minivan, let me paraphrase the late Richard Pryor: "they're ain't dead, yet!"

DISCLAIMER: One of the vehicles referenced and photographed in this commentary was provided by Fiat Chrysler Automobiles