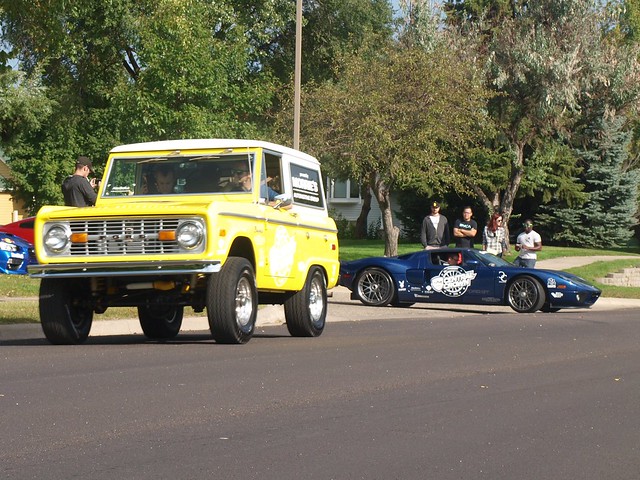 "Eastbound and down…" All Photos by Randy Stern

Here is a recipe: Take about 41 cars of varying performance levels, skew them towards the most powerful, and let them loose on public roads.

Wait, there is more. You set them up on a rally format where you make a checkpoint at a specific time. Make that six, including the finish line. There are some rules – despite that famous line from "The Cannonball Run" stating otherwise (thanks to Brock Yates). However, the fun in doing so are the start and finish of the event, replete with models, loud music and lifestyle nods.

Sounds like a modern iteration of the "Cannonball." Perhaps another "Gumball Rally?" You are close.

On September 20, these 50 teams of cars headed off from the Twin Cities to Chicago on what they call Central Crown. This rally remained true to its mission, in which part of it states that this is at its core "Car people love meeting and driving fast with other car people…[a]nd, we always try to spread some of our good fortune to others when we can."

The one thing that makes the Central Crown rally stand out is the charity element of it. For the 2014 rally, Central Crown states it will donate their proceeds to People Serving People. The Minneapolis-based charity serves to help the region's homeless – including families – transition towards a home and a better life. It is a noble cause for this rally to take on.

Obviously, it all comes down to the lifestyle of the rally. For a fee, there is VIP treatment for the teams, including Playboy-branded beverages, DJ-pumped music and the idea of you being part of the coolest automotive enthusiasts on the planet for the moment. At the end, there is a nightclub waiting to party off those 600 miles of extreme driving.

Then, there are the cars. Event organizer Justin Brouwer confirmed that 41 vehicles have signed up for the Central Crown run. At the start of the run, these vehicles ranged from a 1500 horsepower tuned Ford GT to a 1973 Ford Bronco to a Volkswagen Beetle. In-between were a collection of late model BMWs, Porsches, second generation Dodge Vipers, Subarus, a Maserati, an older Pontiac Bonneville, a modded and chopped 1934 Ford, a few Mustangs, Infinitis and Nissans, and twin Chrysler 300 SRTs. This collection seemed more diverse than one would expect from such a run. However, the entry fee was to a level where you can bring in the supercar owners to run alongside modern tuned compacts and so forth.

Having not been on the rally itself, my Facebook feed yielded some stories along their route from Apple Valley to downtown Chicago. A few cars dropped out due to failures – two reported engine problems. The biggest headache was law enforcement. Some intrepid patrols perched themselves near checkpoints and actual routes to look for speeders along the way. As someone said from Facebook, when you have cars with stickers, they will attract the law. 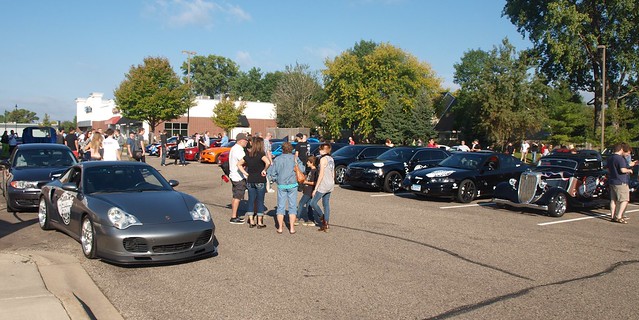 Yet, they also got to be a part of a few cool things along the way. At one point, they took the Merrimac Ferry across the Wisconsin River north of Madison. The Facebook feed was full of photos proclaiming their ride on the ferry. Other than the vehicle failures and brushes with the law, most of the teams made it to theWit hotel inside Chicago's Loop. An assortment of awards were handed out with the party ensuing afterwards.

Central Crown was not just a one-day blast across Minnesota, Wisconsin and Illinois. It was a well-organized effort that focused on bringing a collection of drivers and cars together for a cause. Brouwer said that it was one of the rally's goal to "attract as many interesting, cool cars that people would enjoy seeing that they might not see every day." The planning and promotion took over the course of several months. It brought a collaboration of car clubs – MN BMWs and MN Nissans and Infinitis – sponsors and the best photographers covering the automotive scene in the Twin Cities.

Part of that effort was their presence at other related car events – including Madfurther at South St. Paul and MN C&C (Cars & Coffee) in Chanhassen. After the last MN C&C, they organized a cruise from a regional park in Minnetrista near Excelsior to a lunch spot in Eden Prairie – further to promote the camaraderie the Central Crown sought to promote.

What this event did was to go further than what is offered to this Carmmunity. There is a full schedule of meets, shows, cruises and other automotive events throughout the Twin Cities and beyond. Some are specific to a brand, or a genre. Others attract all comers, but with some cliquishness that underlies the event's success. Others try to attract the largest abatement of enthusiasts and fans to a mixture of results.

Even in its second year, Central Crown could be the ultimate point on the Twin Cities' Carmmunity calendar. It proves a major point about this region: When the lid is removed, we can do things such as this. We do not have to drive for miles and days for the start of, say, the Bull Run or Hot Rod Power Tour to participate in a driving event such as this. We do this right in our backyard.

What will Central Crown's third year look like? If it is not already, it would be something Brock Yates would be proud to see. His "Cannonball" legacy may have been adapted in various ways, but the temper of the adventure is something that will never change.

You could see all of V&R's photos related to the Central Crown rally on our Flickr page.