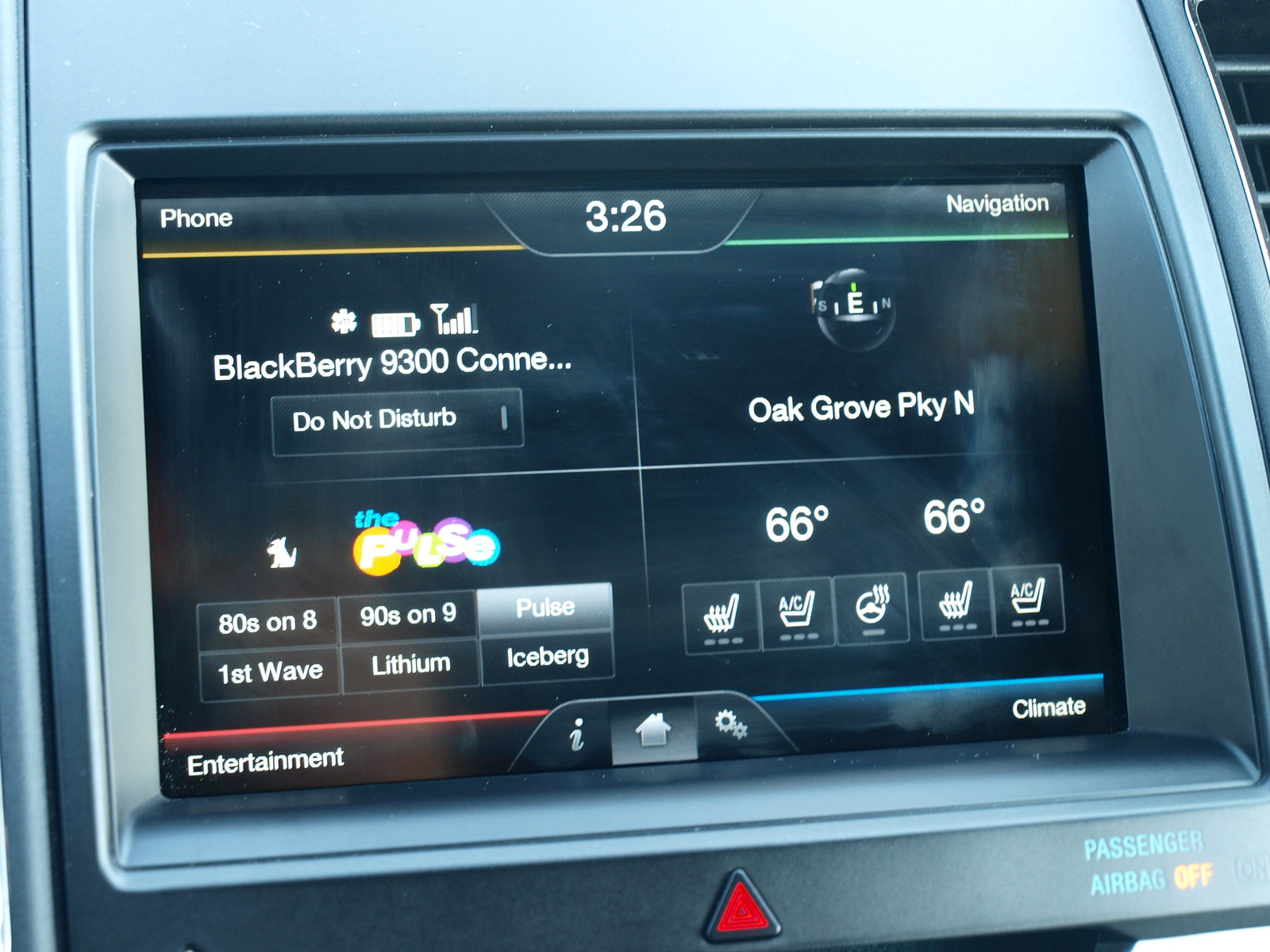 What did I listen to when I was driving during 2012?

When I drive, I make sure I fully utilize the technology on board to satisfy my want of musical entertainment. What comes out of the infotainment system may surprise you – especially the breadth of genres and artists that I lock in for that short period of time.

A musician understands music – so I heard. My off-and-on pursuit of hand drumming (mainly of the Afro-Cuban kind) is more of a springboard to a wide variety of sounds, vocals, melodies, rhythms, harmonies…and so on. It soothes the savage beast – even after a stressful day at the Day Job.

You heard that before, right?

This final Five Favorites of the year focuses on the songs that emanated out of a random preset on an infotainment system and, later, transferred onto my laptop, iPod and Blackberry. Because they were well liked, they ended up on heavy rotation through the Bluetooth connection and playback, or locked in whenever they come on the rotation via SiriusXM. Just five songs – not a Billboard Top 20 Hot Hits chart from whichever radio format.

Actually, I did not stop at five. Try ten…and, they are…

"ADORN" – MIGUEL: The young crooner from San Pedro has been enchanting to those of us who are R&B/Urban Contemporary fans. Though his voice reminds us of a young Freddie Jackson, Maxwell or Donnie Hathaway, he tightens up his sound with new backgrounds and textures. "Adorn" is a love song that makes his muse feels special and it sounds like it, even with vocal counterplay in the background. There is also sexiness in the tune of the song that draws you in. Album: Kaleidoscope Dream (RCA)

"CLOSER" – TEGAN AND SARA: The Quin twins emerged from the underground of Canadian music to near-pop-stardom. The Alt-Rock-Pop sisters are becoming not just LGBT music icons, but fixtures on satellite radio. As the first song from the upcoming album to drop in January, Tegan and Sara jump into a pop mood with an upbeat and up-tempo intro to the new work. It is a 180-degree flip from The Con and a leap ahead of Sainthood. In all – I simply love this song! Now, if we can get them in Lavender before their March show in Minneapolis… Album: Heartthrob (Sire/Warner Bros.)

"ENOUGH OF NO LOVE" – KEYSHIA COLE W/LIL' WAYNE: Miss Cole is mad! She has no qualms letting the world know she is jealous of the guy she wants who decided to date another woman. Somewhere in the bridge, Weezie asks: "why are you worried about that other [woman]?" The product of Oakland has always been honest and forthright about her notion of love and what love should be all about. The sound brings us back to the start of her career as a young, clear voice to be reckoned with in R&B/Urban Contemporary music. Keyshia is not just back in the driver's seat – she's shooting for the top of the heap. This song is a great example of that quest. Album: Woman to Woman (Geffen)

"GUARDIAN" – ALANIS MORISSETTE: Forget about all of the songs on Jagged Little Pill – this is a much more mature and aware Alanis singing about protection in relationships. Since her last album, Alanis got married and had her first child. Life changes everything, and Alanis focused her latest album on exactly that. The song dictates the temper of the album. There is some of the tone from previous albums, but a softening of a tone in her lyrics, despite being one of the most literate above all current artists. If you could use the term "mid-crestfall" in a song, you have my attention. Album: Havoc and Bright Lights (Collective Sounds)

"I'M A WITCH" – LADYHAWK: Independent Canadian Music – or, the stuff that provides a living for the CBC. It can range from hip-hop to Francophone punk. There is a scene in Vancouver that engenders a return to noisy rock-punk, which every band that had burbled out of that scene would make its way across the border via satellite radio. This is where this quartet from Kelowna comes in. This song is an instrument ripping track full of dirty guitar sounds and driving bass. It also helps to see that a couple of band members are quite nice to look at…not that it is a requirement for me. Album: No Can Do (Triple Crown Sounds)

"LET'S GO" – CALVIN HARRIS W/NE-YO: Calvin Harris has had the best year amongst Dance/Electronica artists in 2012. The Scot DJ racked up hits with collaborations and his own vocal stylings. In this case, he enlists the crooner originally form Vegas, Mr. Ne-Yo. Having not been a stranger to dance music, Ne-Yo rips up the song – an eventual paean to futbol as a promo for Pepsi Max – over a hot track by Harris. If you are a DJ and want to get the crowd moving – play this track! Trust me – it gets the blood pumping and the body moving! Any club or party will do… Album: 18 Months (Columbia)

"LAZY LOVE" – NE-YO: Chris Brown may have tried to make up to Rihanna on television, but he is not the best R&B male vocalist this year. Not even. Try Mr. Ne-Yo – who was on fire in 2012. This song is an example of how massive the falsetto/high-toned sexy singer got this year. The song is about not caring how much time one has to make love. Forget about the engagement you had – you will be "two hours late," like Ne-Yo! Then, comes round two. The point being is that if you want to make love to someone – this will put you in the mood real quick! Album: R.E.D. (Motown)

"SURVIVAL" – MUSE: This was supposedly the official song of the 2012 London Olympics. It was perfect – an anthem directly hitting the drama of the games. The message of the song is simple – win. That is why you compete in the Olympics in the first place, right? In typical Muse fashion, it was operatic with astounding instrumentation and arrangements. You might say it is as they tightened up a Queen song from the 1970s and modernized it. If it was the official song, how come they did not perform or play this during the Opening Ceremony? No, they performed it at the Closing Ceremony – darn. Well, they did perform it as the Olympic Committee intended. Album: The 2nd Law (Warner Bros.)

"THE BOXER” – JERRY DOUGLAS W/MUMFORD & SONS AND PAUL SIMON: Take one of the finest tracks from Simon & Garfunkel's Bridge Over Troubled Waters, add the dobro of Douglas and the folk-alt-country sounds of Mumford – and stir. What we have is a stripped down cover of a great song. Somehow, Simon shows up on the recording – not as a vocal. After all, he recorded the song in 1969 with New York City as the backdrop – taken to a new level by a folk-alt-country-Bluegrass collaboration. Album: Traveler (eOne)

"UNITY" – SHINEDOWN: As part of the New Southern Rock movement (Think Creed, Afterbridge, Three Doors Down, Evanescence), the Jacksonville, Florida-based quartet came out with a new album that continues their hard rock-pop-alt sound with common themes. This song actually has two: Linking love and dealing with diversity – both positively. The anthem-like sound of the song and vocal tone of Brent Smith already made this a staple on satellite radio, my iPod and Blackberry. Album: Amaryllis (Atlantic)