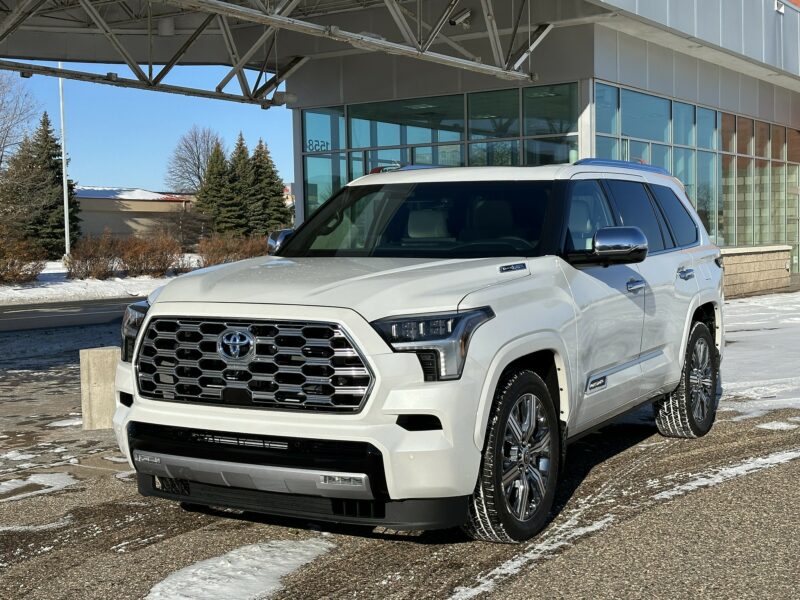 The evolution of the breed has seen another uptick for these family haulers, as new models provide a wider variety and choice for families.

A Victory & Reseda review of the 2023 Toyota Sequoia

The idea of a large SUV that can take the family anywhere is not a new one. We’re talking decades – even though they originated from panel vans built from truck bodies.

The evolution of the breed has seen another uptick for these family haulers, as new generation models and completely new entries provide a wider variety and choice for families. There are now six to choose from, produced by five manufacturers.

The newest entrant in this segment was a long time coming. The last generation model spanned fifteen model years. This third-generation version continues to be built from its pickup truck sibling – with some DNA from another SUV sold worldwide – for a true family vehicle.

The 2023 Toyota Sequoia was developed from the newest Tundra and is now built on the same San Antonio, Texas assembly line. You might say that Toyota is getting down to business by delivering on a truly American family vehicle.

It has to. Look at what it is up against? Shall I name them? Probably not, since we’ve seen so many on the road crisscrossing our cities, suburbs and rural communities. They are the mainstays of the school run, airport limousine services, sports practice runs, and at your nearest big box retailer.

Considering how much Toyota leveled up their Tundra with its full-size, half-ton pickup truck rivals, it’s the Sequoia’s turn to see whether it will rule where it needs to dominate – the large SUV segment.

While built on the same frame as the Tundra, the body deviates from the A-pillar rearwards. The basic front-end shape is there, with an altered version of the bold grille, now framed with a bumper skin. Compared to its pickup truck sibling, the effect is more refined for its purpose. Beyond the A-pillar is a bold long roof body with plenty of glass area all the way to the rear. There are plenty of sculpted creases across the sides onto the liftgate.

My tester happens to the top-of-the-lien Capstone trim level, which adds specific badging and a set of 22-inch chrome alloy wheels. The thick mesh chrome grille is also unique to this trim, giving it a luxurious welcome to its occupants.

The formula of transforming a pickup truck into a large SUV continues as two ways to distinguish one from the other. Toyota has taken this formula to work well for the Sequoia. I have to admit it is quite a handsome machine – a stand out from the current crowd.

One thing that the Sequoia and the Tundra shares is its bold instrument panel. The shape is there, including a 12.3-inch digital instrument cluster specific to the i-FORCE MAX driveline, a 10-inch head-up display, and all of the great switchgear and controls found from below the dashboard’s belt line all the way onto the center console.

Another familiar item is the 14-inch infotainment screen perched above the center stack. It is driven by Toyota’s newest system that also drives wireless smartphone integration and other native functionality. The Sequoia Capstone has 14 JBL speakers emitting a lovely sound throughout the cabin.

Want a new party trick – rather a very useful tool? My tester came with an optional Dash Cam. This is something that is usually available as a third-party accessory. Toyota has this item as a factory installed option. It comes on when the Sequoia is involved in an accident. You can also send the video to Toyota to be used as evidence.

All three rows of seats wear a two-tone semi-aniline leather upholstery that you never thought was possible in a Toyota before. However, the front seats were a bit firm and could use a bit more support and bolstering. Otherwise, they were large enough for multiple body shapes to get behind the wheel. Also, the power steering wheel adjustment does not go higher for taller drivers to get a full view of the instrument cluster.

The second row of seats are captain’s chairs on the outboard positions. The center area has a plastic cupholder set with a bit of a flat storage – not conducive for center access to the third row. However, the second-row seats have a single-level flip-and-fold action that enables great access to the third row. Third row space is decent overall. In total, there are seven seats available in the Sequoia Capstone – that capacity goes up to eight on some trim levels.

You can power fold the third-row seats down to create more cargo space in the back. However, folding will raise the load floor well above the bumper height. A parcel shelf is available that can be adjusted three levels, including up to the third row. No matter what level you put the parcel shelf at, you have a very nice under shelf storage for specific items to fit under.

Cargo space is quite expansive, starting with the under-shelf capacity of just 11.5 cubic feet. If you remove the shelf, volume goes up to 22.3 cubic feet. Fold down the third row, and cargo space expands to 49 cubic feet. Once you fold down both the second- and third rows, the maximum space available is 86.9 cubic feet.

There is only one engine available on the Sequoia: The i-FORCE MAX. Toyota combines a twin-turbocharged 3.5-liter V6 engine with an electric motor. In all, we’re talking 437 horsepower and 583 pound-feet of torque. Connected to a 10-speed automatic transmission, my tester came with a part-time four-wheel drive system.

Keep in mind that this power plant has to carry a vehicle that weighs in at 6,185 pounds. Not exactly a "light" vehicle. It works at its best to tow up to 8,980 pounds behind it. Other Sequoia models can tow more – up to 9,300 pounds.

Power comes on smoothly and acceleration is quite good. Traction is fine, although hampered by the factory-installed tires on icy road conditions. As for fuel economy, I averaged a disappointing 15.5 MPG.

There is no denying that the Sequoia offers a very smooth ride. Even with 22-inch wheels and low-profile tires, the big SUV manages highways and smooth streets surfaces with ease. It also handles rougher surfaces with care, resulting in plenty of dampening to smooth them all out. Cornering is fine, as is maneuverability.

One complaint I have is a common one with four-wheel drive systems. If you have a part-time system and you must have it in 4-HI for snowy and icy conditions, expect plenty of bucking from the front axle when doing tight maneuvers. The steering wheel is large to begin with, which is normal for this class of vehicle. On-center feel is not bad, though tending towards the softer side. The brakes are fine overall. Pedal feel is a bit on the softer side, as well. It turned some Ok stops in normal, panic, and winter situations.

The 2023 Sequoia comes in five trim levels, starting from $58,300. My 4WD Capstone tester came with a sticker price of $80,906. It is worth noting that there is a TRD Pro version available, as well.

Having an entry in the highly coveted large SUV segment is not enough to keep the Toyota Sequoia in the game. It had to be competitive in the segment while delivering everything a family needs. This third-generation Sequoia is now at par with its General Motors, Ford, and Stellantis rivals by not only playing their game, but delivering on something a bit more than what they offer.

That difference is the i-FORCE MAX driveline. None of the Sequoia’s direct rivals offer a true hybrid driveline right now. Let’s not forget its unique style that is very distinctive when compared to its competitors.

The 2023 Toyota Sequoia is a stand-out vehicle and delivers on its unique approach to a popular segment. Before you go out and buy your umpteenth version of your favorite large SUV, give the Toyota a try. It might just break your habit and will make other parents rethink wat they bring to their school run.