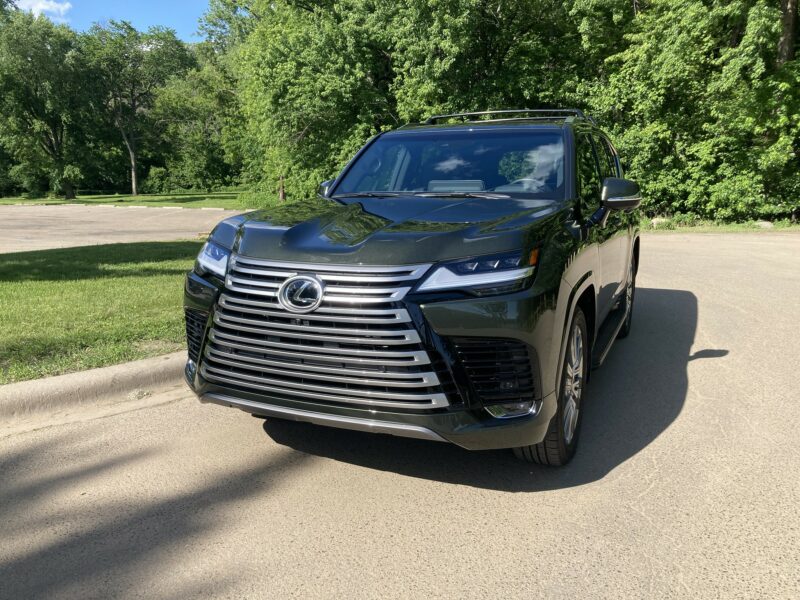 Therefore, the idea of a flagship is now embodied onto an SUV with the same significant amount of luxury to whet the interest of the well-to-do.

The words “luxury” and “flagship” offers up an expectation for excellence. Excellence that is supposed to satisfy customers with the highest tastes.

In the automotive world, both words imply that we should focus on the largest sedans with the highest price tags and the most toys. As we discussed multiple times, the sedan is on its way out of our consciousness. Therefore, the idea of a flagship is now embodied onto an SUV with the same significant amount of luxury to whet the interest of the well-to-do.

The flagship SUV has been the domain of Land Rover. The Range Rover is a prime example of a highly desirable vehicle that can carry families in the highest level of luxury. This exclusive group has a few more members, such as the Cadillac Escalade, Lincoln Navigator, Mercedes-Benz G-Class, Infiniti QX80, Grand Wagoneer, Bentley Bentayga, and Rolls-Royce Cullinan.

Lexus always had a spot in this segment. There were some who have said that previous generations of the LX were not enough to win over this highly discriminatory customer base. Maybe this new generation model will.

For 2022, Lexus pulled out all of the stops on their new LX 600. It is built on an all-new GA-F platform that is shared with the Toyota Land Cruiser 300 Series – the newest generation of their large, off-road ready SUV. Lexus made sure to make their new SUV their own from the bottom up.

The result is a vehicle that is 441 pounds lighter than the previous LX. It is still engineered on a strong set of bones that is designed for adventures on and off the highway, which helps in rigidity all around. Up front is a double-wishbone suspension set-up, while the rear wheels ride on a four-link independent axle arrangement.

This suspension set-up is highly adjustable through the Active Height Control and Adaptive Variable Suspension systems. Both features work with Drive Mode Select or Multi-Terrain Select to adjust the suspension depending on condition and traction needs. Active Height Control also comes into play to minimize pitch and roll when the LX 600 corners through winding roads or a highway cloverleaf interchange.

Another part of the strategy for the new LX was to swap out the V8 engine for a twin-turbocharged V6 engine, similar to one found underneath the hood of the LS flagship sedan and LC grand touring coupe/convertible. By replacing displacement for boost, the 3.5-liter unit puts out 409 horsepower and 479 pound-feet of torque.

The twin-turbo V6 is connected to a 10-speed automatic transmission, also similar to the one found on other Lexus flagship models. This transmission channels its power to all four wheels through a full-time four-wheel drive system with an electronic center differential. This, while riding on 22-inch chromed alloy wheels and 265/50R22 Dunlop tires.

Lexus touts the balance of luxury and capability with intention to attract the flagship SUV customer base. In the top-spec Ultra Luxury model, seating capacity has been reduced to four with two reclining rear seats. The passenger side seat has a lot of electrically-operated functions to enable it to recline up to 48 degrees like on a private jet – front passenger seat pushed in for added leg room with an ottoman folded down for further comfort.. Rear seat passengers also have a touch screen to adjust those two seats, along with their own climate and audio settings. And, yes, those seats do massage, as well.

The penalty might not be a big one on the LX 600 Ultra Luxury model. The rears seats do not fold down for extra cargo room. You do have 41 cubic feet of luggage space for that special passenger who decided to recline near flat while you’re driving them away. Regular LX 600 models can carry up to 71 cubic feet, depending on the trim level and how many rows of seats you have.

If said VIP has more than 41 cubic feet of luggage, you can tow up to 8,000 pounds behind the LX 600. I’ll leave you to your imagination as to what one could tow behind this SUV…hopefully, a mobile dressing room or a small backlot trailer.

For the driver, the LX 600 offers a more elevated cockpit than previous generations. The instrument cluster is fully digital screen with the familiar Lexus graphics and some customization on the screen. This is augmented by a wide head-up display, making driving much safer. On the center stack, you have a 12.3-inch infotainment screen driven by the new Lexus Interface system. You can mirror your smartphone, along with utilizing various navigation options. Mark Levinson adds 25 speakers through a 2,400-watt system throughout the cabin for luxurious sound. Another touchscreen positioned down towards the console controls climate, driving, and seat functions, as well.

Both front and rear consoles are wide, but they do not cut into the width of the seats themselves. All four seats felt pretty firm but offer good bolstering for side support. I did feel some fatigue, but not enough to cause alarm from a roundtrip to and from Eau Claire – and Chaska – for some magazine work.

There is one point of nitpicking. The rearview mirror can be turned into a camera screen. In theory, this sounds like a great idea. In practice, it was not as executed as I hoped. During the daytime when it is sunny out, you can see the camera, but it is also picking up the same images as it was regular mirror. There is a way to do one or the other, but I couldn't find it somewhere.

In terms of the driving experience, the LX 600 does its best to give you a superb ride. Yet, there are moments when you hoped that you’re able to just simply waft on the highway no matter the road condition. Though the suspension set-up is advanced, I was hoping for more comfort. I know…I get it…it’s not a Cullinan.

Handling has improved overall, with a flatter cornering stance than the previous generation. You do feel a bit of roll, however. Nothing too earth-shattering or alarming.

If one thing stood out on the LX 600 is its brakes. Panic stops were superb, as were normal and wet stops. This system was engineered for not only daily driving, but for off-road performance, as well. Pedal feel was terrific. Plus, front end diving has been reduced from prior generation models.

Another major improvement over the previous generation LX was its steering system. The turns are tighter, but not super-tight. Wheel response is much better and on-center feel was just fine for highway driving.

There is one point to make regarding the improvements on the new Lexus LX 600 – fuel economy. The 17.8 MPG average I observed is quite the improvement. The highest average I earned in the previous generation LX 570 was 15.5 MPG. At least it wasn’t 12.7 MPG…

Yet, I still felt its size and largess when shuttling it around town. While the weight savings was evident, the Ultra Luxury model pushed closer to its last generation weight of 6,000 pounds than lesser models. It far from dainty in the city or some suburban situations. That concerns me whenever I drove a vehicle of its size/price/prestige class.

By now, you're probably wondering when I was going to address the LX 600's exterior – in particular, that grille. It has the brand's Spindle Grille, true. It is large, obviously. Should that be a deal breaker? It depends whether you value aesthetics over everything else.

In all, it is a Lexus. Not just up front, but all around. It stands out against the usual suspects in class I have already mentioned.

If there is one exterior feature I am thankful for – it is the step attached to the lower side body panel. Sometimes you just need that assist – and it comes in handy. It is also sturdy, too!

I could get into the “is this vehicle worth $128,000-plus” string. But, I won’t. Not with the counter arguments about how inflation, market trends, and the challenges affecting the automotive industry have pushed the price of vehicles to new heights.

The conclusion I will go with is that the Lexus LX has improved tremendously in every way possible. It is not perfect, and some would argue for other vehicles in its size/price/prestige class. However, this new Lexus LX does have a lot going for it. That is what I’ll bank on.