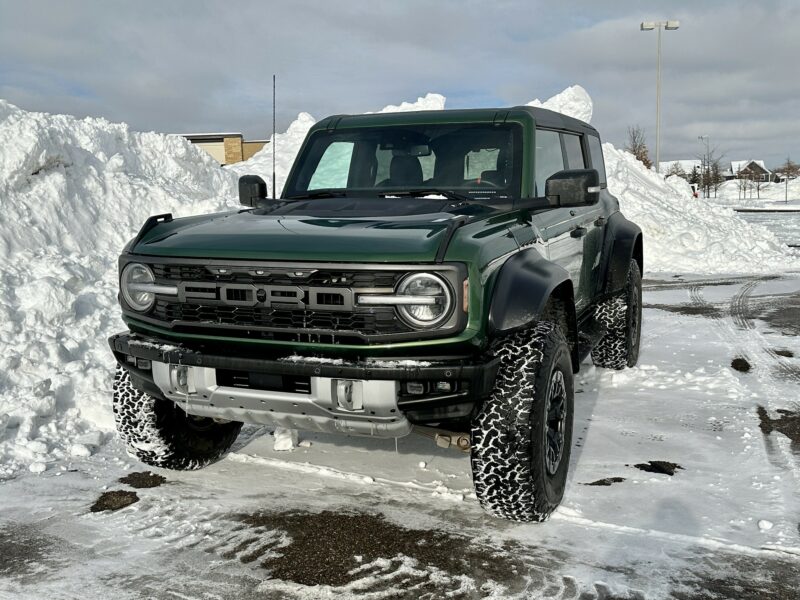 I’ve been waiting for this for quite some time. Even though I had a little taste thanks to a friend of mine, it was on my “to do” list since it was announced.

A Victory & Reseda review of the 2022 Ford Bronco Raptor

We are starting 2023 off big! And, there is much rejoicing at Victory & Reseda because of it!

The reason is because of a vehicle. To be specific, it is one of the most desirable models during the COVID-19 Pandemic.

Oh, I’ve been waiting for this for quite some time. Even though I had a little taste thanks to a friend of mine, it was on my “to do” list since it was announced.

In this business, patience is necessary to maintain one’s professionalism. When the opportunity came, I knew that it would be worth the wait.

However, I did not just get a Bronco to work with here. This one is not some mere Badlands with an EcoBoost 2.7-liter twin-turbocharged V6. Nor is it a Black Diamond with the standard EcoBoost turbocharged four-cylinder and the seven-speed manual gearbox.

They sent the baddest Bronco yet – the Raptor.

The mere word Raptor puts me in a rapture. These highly capable vehicles are completely my jam. Not everyone understands this, but I don’t care. A Raptor tells your friends “it’s OK, I’m feeling good” and your enemies to “(not so) kindly get out of my way.”

A Bronco Raptor is what most off-roaders desire – a ready-made high performance trail crawler with all the grip in the world to grab onto any terrain in its wake.

Each Bronco starts off with a design that brings you back to the original 1966 model. A squared off body that is both modern and purpose-built. Ford brought in many cues from the original, such as the round headlamps and removable doors and roof that invites you to tackle anything in its wake.

The chassis features an upgraded HOSS 4.0 suspension setup using FOX Live Valve 3.1 Internal Bypass Semi-Active Dampers. There is also a front stabilizer bar disconnect. The Bronco Raptor stands 13.1 inches from the ground up to the chassis. There is also a maximum wheel travel of 13 inches up front, 14 inches in the rear. All of this adds up to greater articulation over uneven surfaces and a softer, more solid ride overall.

Underneath the hood is a larger 3.0-liter twin-turbocharged EcoBoost V6. Power goes up to 418 horsepower with 440 pound-feet of torque. All Bronco Raptors are equipped with the ten-speed automatic transmission and the Terrain Management System with seven G.O.A.T. modes – the acronym stands for “Goes Over All type of Terrain” – to choose from.

Given the recent dumping of snow we had in the Twin Cities, The Slippery Mode came into play a lot. That mode is preset to an automatic four-wheel-drive setting that works both axles towards providing necessary traction to those surfaces.

In addition, you can also enhance your experience on tougher terrain by going through the buttons on top of the dashboard. Those buttons can disconnect the front stabilizer bar, lock the front and rear differentials and increase the suspension and chassis flexibility when you truly need it.

Let me say this…I love this vehicle! I mean…if I had an idea of what an off-road-ready SUV should be, it’s this. It just does everything I ask it to and with ease. No axle "buck" when I do tight maneuvers, no bounce or float in the ride quality…just a poised vehicle that wants to tackle what’s in front of it.

Behind the wheel is a great environment. The seats are firm, but they offer a lot of bolstering and support. There is room for five in this four-door Bronco Raptor…four adults, to be honest. Still, the cargo hold offers plenty of space behind the rear seats – up to 33.4 cubic feet. You can fold down the rear seats for more – Ford states it can load up to 73 cubic feet.

As far as the dashboard and center console is concerned – this is an interior that I expect in a vehicle in its class. The readouts are large – in particular, the 12-inch digital instrument cluster. The 12-inch touchscreen houses Ford’s SYNC 4 infotainment system and it works very well. I got smartphone integration and other summary readouts to augment the instrument cluster. Sound came through on the standard seven speaker set-up.

There is an ease of operation that makes the Bronco Raptor more lovable. Yes, I said “lovable.” It’s a lovable beast. No need to muscle a lever to get to 4-H or figure out a series of controls somewhere that you can’t reach.

If there was one drawback to the Bronco Raptor, it would be the fuel consumption. The 15.1 MPG average is aligned with what it says on the Moroney – that, according to the Environmental Protection Agency. If you can live with that fuel consumption figure, then you would be happy to know that it takes Regular unleaded fuel.

The Bronco Raptor is available only in the four-door model. It is one of ten Bronco trim levels available – with some offered in a two- and four-door body style. Some models you can choose with a soft top or hard top. The Bronco lineup starts from $32,295. Our tester came with a sticker price of $75,770.

As you probably figured out from the entire review, this Ford Bronco Raptor got me. It stole my heart. It was exactly what I expected and more.

Then again, any Ford vehicle with the name “Raptor” in it will do exactly that for me.

So, yes, it was worth the wait. Not just in terms of the timeframe from introduction to having the vehicle to work with. Importance is something we often analyze un terms of where a vehicle stands in the marketplace. The Ford Bronco – not just the Raptor model – has met the importance factor when it comes to what customers want and desire.

This is how 2023 began…with a Ford Bronco Raptor. I cannot think of any other way to kick things off this year. It's the baddest of the all!