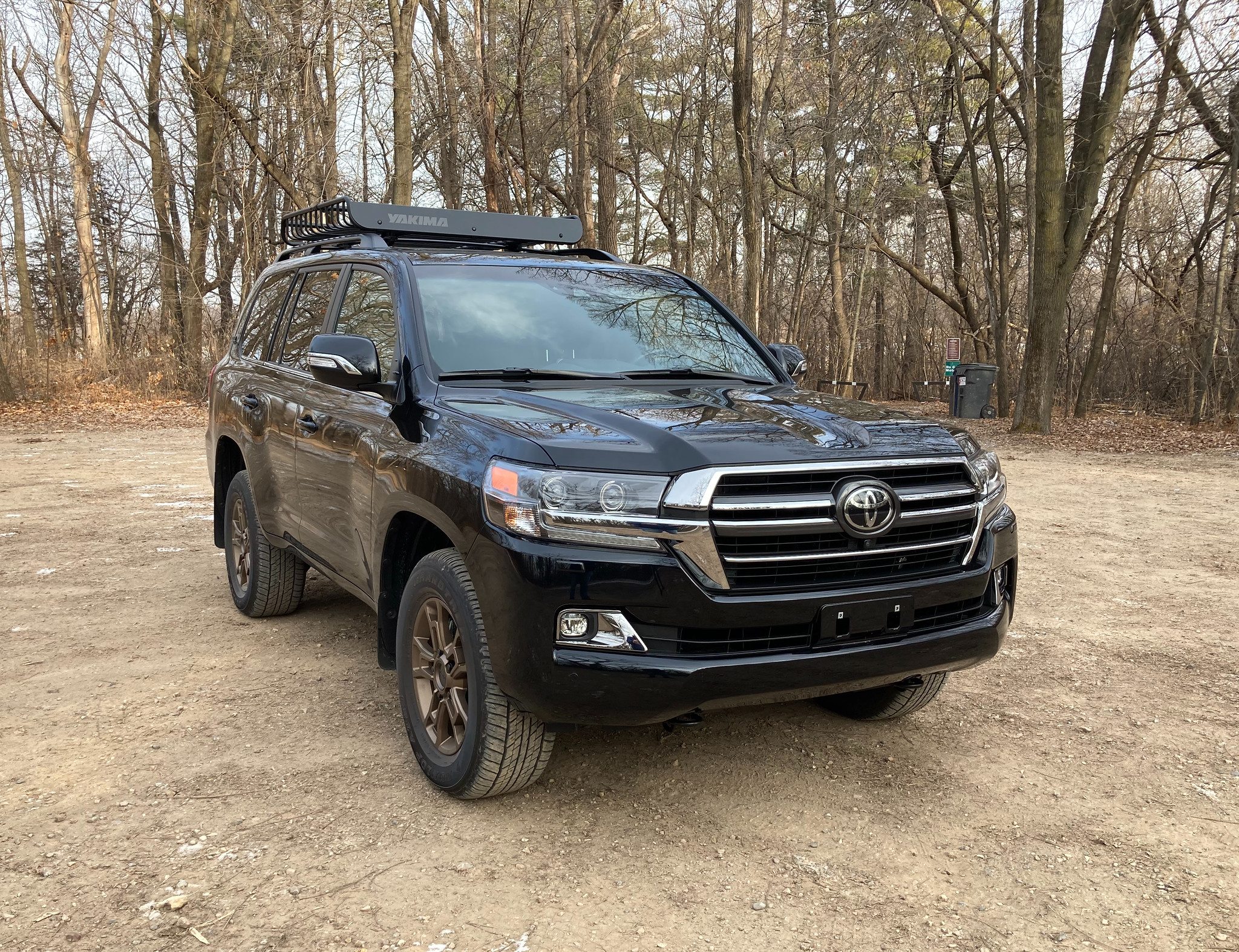 Seventy years ago, Toyota made its mark by introducing the Land Cruiser SUV to its home market of Japan. Inspired by the military version of the Willys-Overland (and Ford) Jeep, the Land Cruiser would become the world standard in off-road adventure.

Seventy years ago, Toyota made its mark by introducing the Land Cruiser SUV to its home market of Japan. Inspired by the military version of the Willys-Overland (and Ford) Jeep, the Land Cruiser would become the world standard in off-road adventure.

When I first reviewed the Land Cruiser back in 2017, I wondered whether it would retain its title as the "greatest SUV on this planet." After all, the Land Cruiser name is synonymous with tackling places where mere vehicles wouldn’t even dare to go – such as the sand dunes outside of Dubai, the vast outback of Western Australia, the jungles deep in Borneo, and the foothills of Mount Kilimanjaro.

Now, there is a twist in the story. For 2021, there are a few countries left that actually sell this 200 Amazon version of the Land Cruiser. Yet, in its 70 years, Toyota sold over 10 million Land Cruisers, although they only sold just over 3,500 of them in this country in 2019.

Which has led to some rumors about this model’s demise from the USA market. A few other automotive outlets published some reports that the 2021 model year will be the final one for the Toyota Land Cruiser. Others point out that a new generation model is on the horizon, but it is unclear whether it will be sold here or not.

If you set aside the rumors, perhaps you can appreciate the 2021 Toyota Land Cruiser Heritage Edition I had to work with. It may look like a relic from the past, but that same assumption could be applied to other vehicles sold in this country.

It is best to live in the present. But first, an explanation is in order.

The Heritage Edition was introduced at the 2019 Chicago Auto Show by Toyota to celebrate the 60th anniversary of the iconic FJ40 Land Cruiser. Aside from the special retro badging and 18-inch bronze-colored BBS alloy wheels, the Heritage Edition is very special version of an icon onto itself – the 200 Amazon Land Cruiser. In addition, a huge Yakima MegaWarrior roof rack is installed as simply the icing on top.

On the flip side, the Land Cruiser Heritage Edition is sold as a five seater, instead of a three-row model. They also took out the Cool Box among other features seen on the standard Land Cruiser.

Still, it is all Land Cruiser. That says a lot, because this vehicle is a whole lot of SUV.

It is not as large as, say, a Chevrolet Suburban or a long-wheelbase Ford Expedition. The Land Cruiser Heritage Edition tips the scales at 5,715 pounds – 100 pounds less than the standard Land Cruiser sold in the USA. You could say that the removal of the third row of seats may have been a part of this weight loss. Still, you can feel the bulk in a more concentrated package.

In its own way, it does fit the part of being a global trekker. The Yakima roof rack adds to that image. The Land Cruiser Heritage Edition also adds a dark background to its LED headlamp units and a specific grille that harkens back several generations of four-door models. Remember the J50 from the 1970s? I do. What a beast!

The retro badge on the rear roof pillar is a nice touch. As does the BBS 18-inch alloy wheels. The rest of the Land Cruiser does not deviate from the standard model, with its split rear liftgate and wide doors intact.

Seating is comfortable with big cushion and backrest. The rear seats are large with a lot of head room. Legroom is OK, but I wished for more space underneath the front seats for my feet. About that third row removal, you can actually order it as an option on the Heritage Edition. Not all is lost.

Without the third row seating, there is 41.4 cubic feet of cargo space that can easily be filled up. A standard tonneau cover can hide your gifts from prying eyes. Although the privacy glass on the rear quarter of the roof and liftgate does an equally good job of obscuring that PlayStation 5 you have hidden in the back of your Land Cruiser Heritage Edition.

In the past few years, the Land Cruiser received some updates to the cockpit that balances function, form, and luxury. The instrumentation is straightforward with two large dials and a nice center screen for information. The center stack is crowned with a nine-inch touchscreen, cascading down to include the climate controls, the notched shifter, and all of the controls you need for proper off-roading.

JBL provides 14 speakers throughout the cabin of lovely sound. You do get wireless charging, but not smartphone integration. Your USB connection works to playback music files, while Bluetooth will handle your calls.

It is worth noting that the Land Cruiser has plenty of driver assistance features keeping me in line. That Dynamic Radar Cruise Control does come in handy on highway runs.

Powering this Land Cruiser is Toyota’s 381-horsepower 5.7-liter V8. There is a lot of thrust coming down low, thanks to its 401 pound-feet of torque. Combined with an eight-speed automatic and a full-time four-wheel-drive system, the Land Cruiser was not made for fast runs. It is made to get off the highway and handle the rough stuff en route to the cabin.

Sadly, there is one outcome to this driveline that I wished was better than I wanted – fuel economy. I averaged 13.8 MPG.

As with most off-roading machines, you expect a very soft ride. It delivers with loads of suspension travel designed to absorb anything from smooth tarmac to rutted roads. In turn, handling is very soft. Consider the geometry equation of a 74-inch-plus height and 8.9-inch ground clearance providing you a very high center of gravity. Therefore, maneuvering will be tricky, as long as you do so within the low limits of this vehicle. In other words, take this Land Cruiser easy, slow, and careful.

There is a bit of effort needed when steering the Land Cruiser Heritage Edition. Combine a big steering wheel with a pretty precise power-assisted rack and tall, upright fenders and you will learn to ensure that you can do the right maneuvers in every situation. The Land Cruiser offers a pretty soft on-center feel that can be corrected easily. Overall, you can do a lot of with its turning radius with just some patience.

Without its soft suspension, braking would be more of a challenge. I found a lot of nose diving when applying the brakes in panic situations. Normal stops require some pre-braking before hitting the mark. Pedal feel is very good, however.

It would be easy – and snarky – to conclude that the Toyota Land Cruiser is a large, thirsty, and every expensive SUV that has no relevance in today’s marketplace. One could conclude that perhaps that the Land Cruiser no longer has a place at Toyota dealers.

For what it’s worth, this is a vehicle that attracts a specific crowd. A rare kind of SUV enthusiast that understands its capabilities and can properly use its off-road systems to get the maximum benefit from them. However, we know this could easily be a "Wayzata Tractor" that offers a different kind of mall-running, hockey-practice-shuttling experience than the usual suspects from GM and Ford.

So, yes, the Toyota Land Cruiser is a global trekking icon. It is also a rare sight these days. And, if the rumors are correct, it will disappear in a year’s time. It takes someone who appreciates its heritage and place in the world to truly enjoy what this Land Cruiser offers.

If you are that particular someone, get one while you can.