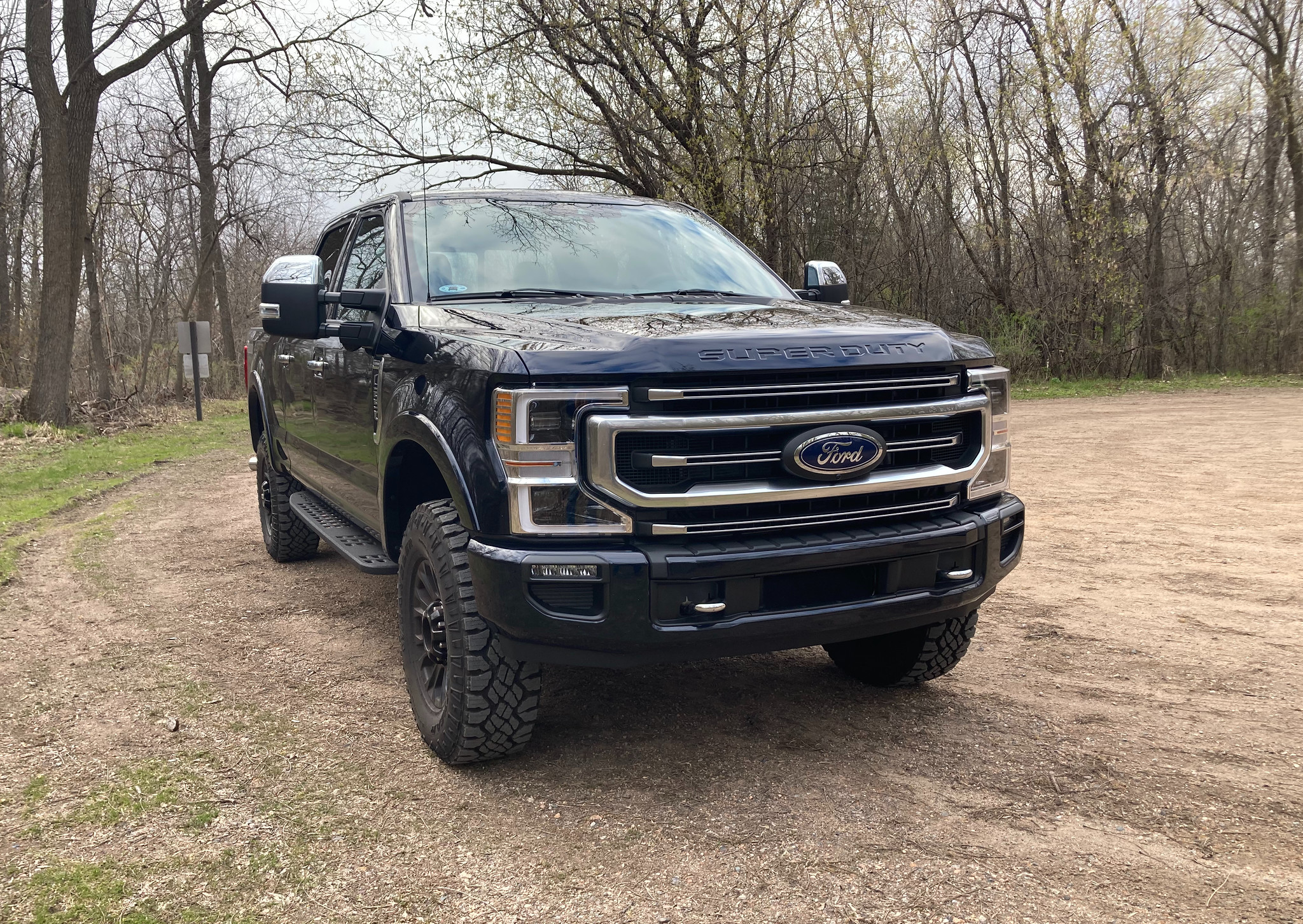 I mention all of this because there was an anxious giggle upon reading that Ford would offer an off-road package for the F-Series Super Duty called the “Tremor” over a year ago. Frankly, I found this to be pretty funny, while I was scratching my head over it.

Let me admit one thing: The word “Tremor” might be a bit of a trigger word for me.

I grew up in California, where earthquakes are a part of life out there. Some worse than others.

On February 9, 1971, my family woke up to the Sylmar earthquake just before my brother and I were to go to school. For years, we had a running crack that went around the inside of the house in Reseda. The noticeable scar from that magnitude 6.4 quake.

Eighteen years later, I was caught up in the Loma Prieta earthquake that shook Northern California. This magnitude 7.1 quake caused damage from Santa Cruz to San Francisco and Oakland. I was driving a taxicab and got stuck in a typical traffic jam on Sir Francis Drake Boulevard in the town of Ross in Marin County. I never felt it. Luckily, the house I lived in up in San Rafael had no damage to it. I was lucky then.

I mention all of this because there was an anxious giggle upon reading that Ford would offer an off-road package for the F-Series Super Duty called the “Tremor” over a year ago. Frankly, I found this to be pretty funny, while I was scratching my head over it.

To put my mind at ease, I must explain what a “Tremor” is in context with the pickup truck I’ll be discussing here. The Tremor is a package Ford is offering its F-Series Super Duty models with the single rear wheel configuration for Crew Cabs with four-wheel-drive.

The package adds a custom 1.7-inch twin-tube dampers to a beefed up suspension set-up. Both the front and rear suspension get the off-road treatment. Ford also adds a set of 35-inch off-road tires, as well as adding Rock Crawl and Trail Control settings to the set of selectable drive modes.

You can choose to add the Tremor package to most trims from the XLT to the Platinum. My tester had the Platinum trim, which made me scratch my head further. You see, the Tremor’s main competition is the Ram 2500 Heavy Duty Power Wagon. That is a stand-alone trim for Stellantis North America’s big off-road rig. Ford gives you the capability in almost any Crew Cab four-wheel-drive, single-rear-wheel Super Duty pickup truck you want. I’ll get back to you whether that is a good thing or not.

Also, the package works with both the 6.7-liter PowerStroke turbocharged diesel V8 engine or the big 7.3-liter gasoline V8. In my tester’s case, it’s the latter. Compared the diesel, the numbers appear to low, with 430 horsepower and 475 pound-feet of torque. They are also lower compared to the F-150 Raptor, but that would not be a fair comparison since we’re talking about a large V8 with pure power in contrast to a purpose-tuned twin-turbocharged V6.

The result is a smoother performing engine. From a stop, the 7.3-liter V8 takes off quicker and easier. It handles on-ramp and passing maneuvers with ease. Most importantly, the V8 is quieter when cruising than the PowerStroke diesel.

The gasser V8 is also a solid choice when going off the highway. The PowerStroke diesel has a lot of torque to put down – 1,050 pound-feet of torque. While this low-end power is optimal on a lot of off-road, there is a train of thought that you really only need the 475 pound-feet of torque to do about almost every maneuver you will encounter on trails wide enough for a 6,600-plus pound three-quarter-ton pickup truck to handle.

Connected to this big V8 is a 10-speed automatic transmission sending power through a two-speed transfer case and its four-wheel-drive system. The transmission shifts smoothly and enables the big gasser V8 to handle practically everything.

When it comes to fuel economy, I had no expectations of efficiency along the lines of a PowerStroke diesel. However, I did average 11.8 MPG. At least that’s better than the more powerful and lighter Ram 1500 TRX.

The beefed up suspension provided a softer ride overall than in a “normal” F-250 Super Duty. Yet, I never felt any bouncing or diving from its long shock absorber travel. It was mostly solid and absorbent, even on rougher surfaces.

You will find some axle buck when you put it in to four-wheel-drive when you have to do any tight turning maneuvers, which is supposedly normal. The big 35-inch tires did not interfere with the steering system and I actually found it quite compliant when making routine maneuvers.

The one thing that still surprises me about Ford pickups was the braking system. Pedal feel is solid to send down some good stops to the wheels.

Why would you add the Tremor package to your single-rear-wheel, four-wheel-drive Crew Cab F-Series Super Duty? One would think you would use its extra capability as intended. It is true that you cannot take this truck on most off-road vehicle parks around where I live in the Upper Midwest because the trails and maneuvers might be too small for it.

There are other situations you can use this truck for the added benefits of this package. Managing your property where the terrain allows you to do so. Taking it to a desert or flat plain where are can lawfully take it on a run across it. Lawfully is the key word here.

However, I have a feeling that most customers will add the Tremor package for appearance purposes. I mean, who wouldn’t want a “bro-dozer” with such a cool-sound, Earth-shattering name?

Let me back up a bit here. The term “bro-dozer” is not exactly a term of endearment. That term classifies a specific type of customized pickup truck that is either lifted or leveled (meaning the suspension is given a higher stance than its standard specification through additional suspension parts), installed with varying performance parts, applied with identifiers that divide opinion, and driven with less care than the average pickup truck operator.

A Ford F-Series Super Duty with the Tremor package may look “bro-dozer”-ish, but it is far from being one. As I mentioned before, you can add this package to the popular XLT trim all the way to the King Ranch and Platinum luxury trim levels. In my tester’s case, I have the Platinum trim.

This brings up another head-scratching point. One would think that adding the off-road ready and rugged Tremor package to a luxury trim would be absolute overkill. These two things simply go together in the pickup truck space.

First of all, your pickup truck’s configuration belongs to you. You know what you want from your rig, in particular, your towing and payload needs, as well as how you will use it every day. Add your own personal touch to it. Even if you’re running a business, you want to put your own personal stamp on your truck.

Does this give you permission to add the off-road-ready Tremor package to your new Ford F-Series Super Duty Crew Cab, four-wheel-drive, single-rear-wheel pickup truck with the Platinum trim level? If the shoe fits, wear it!

Before you take home such a vehicle, there is one bit of information to discuss – the price. This tester came out to a sticker price of $73,825. The Tremor package alone will cost you an extra $3,975.

Let me state the following: I love pickup trucks. Mostly full-sized, half-ton pickup trucks with balanced performance, superb comfort, and great maneuverability in urban environments. I also love off-road ready rigs that can bring out the kid in me – such as the Ford F-150 Raptor, the Ram 1500 Rebel and TRX.

However, I have to admit that this 2021 Ford F-250 Super Duty with the Tremor package has gone beyond some limits for me. Yes, it is really big. Climbing down from it is a bit challenging. I also had to take extra care in driving it in most places. Then again, after several heavy-duty full-size pickup trucks, I’m sort of used to it.

Enough about my personal thoughts on this truck. If you want a heavy-duty full-size pickup truck with an off-road-ready set-up, the Ford F-Series Super Duty with the Tremor is worth checking out. It might cause a few aftershocks in your neighborhood.

However, you’ll never feel anything from the cab of your rig. And, you'll laugh about it afterward.