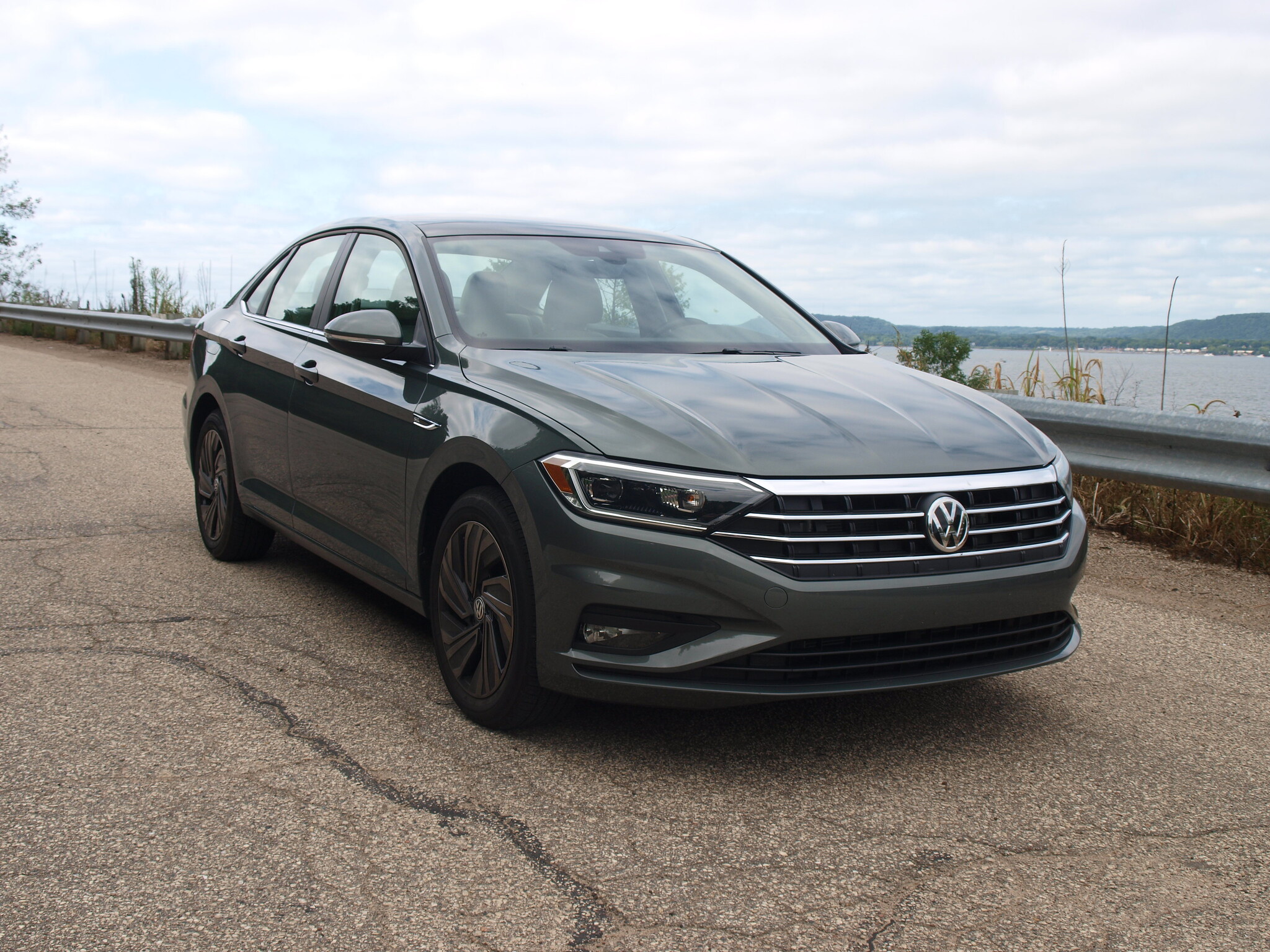 A Victory & Reseda review of the 2019 Volkswagen Jetta

I do. It was an interesting year for me. I graduated junior high to Reseda High School, after what would be a tumultuous year. It continued with a family tragedy in my first semester at Reseda High.

There were some positive things that happened in 1979. One of them came from Volkswagen, a company that reinvented itself from the purveyor of air-cooled, rear-engine automobiles to adopting a transverse-mounted, water-cooled, front-engine format for its most popular models. They were producing some of these vehicles right in our own backyard – Westmoreland, Pennsylvania, to be exact.

The Pennsylvania-assembled Rabbit (the Mk I Golf, as it was called stateside) and the Karmann-built Scirocco captured the imagination of former Beetle, Squareback, and Fastback owners. However, Volkswagen had a surprise for us in 1979. The folks in Wolfsburg knew that hatchbacks were catching on, but Americans still preferred a sedan with a trunk. Luckily, they were developing such a vehicle off of the Mk I Golf platform.

That car was the Jetta.

The Jetta's arrival in the USA captured Rabbit, Beetle, and Fastback/Squareback owners looking for something more upscale. Not only did it share a few pieces with the Rabbit, it showed off an upmarket air and feel.

No one had any idea how much of a success the Jetta would be in 1979. Until this year, the Jetta was the volume seller at Volkswagen in the USA. Though the Rabbit/Golf/GTI/R32/R had more cargo space, the Jetta had a useful trunk space that won over its customers. Not to mention, its sporty driving manners won over many an enthusiast looking for a sedan. And, ask any GLI owner about their GTI-powered Jetta.

Some folks had some reservations about the Jetta. The last generation model lacked that upmarket feel of previous generations, as it was squarely aimed at more mainstream and higher volume models from Toyota, Honda, and so forth. There had been arguments about the cabin space being a bit too small for American tastes.

For 2019, the Jetta celebrates its 40th year of existence with an all-new model. Luckily, I received an SEL Premium model to see whether we should celebrate the Jetta with party favors and balloons.

First off, the 2019 Jetta is now built off of the MQB platform – the most versatile architecture in Volkswagen history. In the USA, the MQB serves as the basis for all Golf models, the new Tiguan, and the Atlas. Yes, the MQB can be made into a mid-sized SUV, as well as its more globally popular vehicles. The advantage of the MQB platform is solidity and structural rigidity. It is a great platform to build a popular car on.

There had some who had balked at the Jetta's new look. It is part of a new design approach Volkswagen is executing across the board. The larger grille offered a mix of opinions. I think it befits the new Jetta and works very well in terms of direct air intake into the engine bay. The lines are much sharper than ever, following some of the design of the Golf with its own distinct flair. That flair is found at the rear, where you would swear that Audi had something to do with it. The extreme creases and sculptured taillights are tastefully done.

The overall shape is modern. Some have pointed to the current Honda Civic as a contemporary. I would throw in the Hyundai Elantra – the recently revealed 2019 update. The Jetta's mission is to be a cut above the rest of its class. The SEL Premium model is a prime example of this intended move, with its 17-inch alloy wheels and tasteful chrome accents.

Critics of the exterior only need to step inside the cabin to perhaps look for the positive side of the Jetta. That is where you will be won over. The materials have been upgraded compared to the previous model, including soft touch areas above the interior's belt line.

My SEL Premium tester came with the Digital Cockpit, a fully customizable TFT screen that encompasses more than just the instrumentation. Similar to Audi's Virtual Cockpit, you can bring in the navigation screen to full resolution, while you get key readouts in digits instead of dials. Controls and switches are easy to work and to the touch – just like a lot of modern Volkswagen models.

Seating for four is achieved in a cabin that was increased over the last generation. The front seats offer plenty of support for most bodies. My tester has power adjustments for rake, recline, and lumbar support for the driver. Rear seat room may be a bit of a challenge for those with tall torsos, as the head will brush against the roof where the sunroof folds into. Four average adults will have no problem enjoying the ride inside the Jetta.

Trunk space is very generous, with 14.1 cubic feet to stuff everything inside of it. There is a bit of a higher lip for roller luggage to manage, but space itself goes deep. The rear seats fold down in a 60/40 split for longer loads.

The Jetta received an upgrade on its Car-Net-backed MIB II infotainment systems. The SEL Premium tester came with an 8-inch Dimension Audio touchscreen that is intuitive and offers superb functionality. Apple CarPlay and Android Auto is part of this system, which is integrated very nicely. Quality sound is fed through the Jetta's new Beats Audio speaker system. It is interesting that they swapped the famed guitar maker for Hip Hop's premier producer – yet, the sound is pretty similar in terms of fidelity and balance.

Initially, the Jetta will be powered by the 1.4-liter turbocharged TSI engine. This 147 horsepower four-cylinder mill feels as it has much more power than the ratings tell me. The reason is the 184 pound-feet of torque, which is top of its class. And, yes, you can feel the power from the onset, with nominal turbo lag to boot. I averaged an astonishing 37.5 MPG in my care. You do not just get performance, but great fuel economy with this engine in the Jetta.

Both transmissions have been upgraded. Three-pedal drivers get an extra gear – 6 speeds mated to a clutch. Automatic drivers now get an 8-speed transmission. My tester had the automatic, which is a smooth shifting gearbox that feeds into the huge torque wave. All models are front-wheel drive.

If there is one thing that stands out in the Jetta is its suspension. Not only does the Jetta rides smoothly – not too taut nor too soft – it takes on corners with confidence and authority. While the Bridgestone Ecopia tires shod on this Jetta is usually designed for improved economy, they do provide a good degree of grip when you need it.

The brakes are superb with excellent pedal feedback and feel. Normal and panic stops were also good, especially with ABS action on the latter. The steering system offers a solid turning radius with great wheel feedback. The steering wheel is the right size, which is great because of the system's solid on-center feel.

As for the safety technology, one of the things I have been testing a lot lately has been adaptive cruise control systems. This is a test of making sure that the system not only works but enables the vehicle to play nice out on the highway with others. For a compact sedan, the 2019 Jetta has a really superb system that responds and reacts in real time, as it was designed to do. Also, you can adjust the distance between vehicles with more steps than most vehicles on the marketplace. If you can get a Jetta with this feature, use it!

The 2019 Jetta is also a great value in its class. Starting price for the S model with manual transmission is $18,545 – about the same price as the outgoing 2018 S model. My SEL Premium tester came with a sticker price of $27,795.

I would be remissed if I did not mention the new People First Warranty. It covers everything for 6 years and 72,000 miles, whichever comes first. NBot to mention, it is transferrable. Needless to say, this is one warranty that shlould not be overlooked.

It would safe to say that the 2019 Volkswagen Jetta is indeed a fantastic car. For compact car customers, you will find it a charming, well-rounded, and lovely car to drive on both the grocery run to out-of-town adventures. The first five trims – S, SE, R-Line, SE, and SEL Premium – are just the beginning of this new legacy for the Jetta.

For the GLI lovers reading this website, don't worry. Volkswagen has said that it is on its way later in 2019 – maybe sooner. Believe me, I vote for "sooner."

If you are looking at a compact sedan, let me ask you this: why aren't you considering the Volkswagen Jetta? The answer was easier back in 1979 – it was a charming, well-constructed sedan that offered contemporary looks and superb driving manners. Seems like things haven't changed a bit in the span of 39 years.